The intensely studied nematode worm Caenorhabditis elegans can be transgenically engineered to express the human β-amyloid peptide (Aβ). Induced expression of Aβ in C. elegans muscle leads to a rapid, reproducible paralysis phenotype that can be used to monitor treatments that modulate Aβ toxicity.

Accumulation of the β-amyloid peptide (Aβ) is generally believed to be central to the induction of Alzheimer's disease, but the relevant mechanism(s) of toxicity are still unclear. Aβ is also deposited intramuscularly in Inclusion Body Myositis, a severe human myopathy. The intensely studied nematode worm Caenorhabditis elegans can be transgenically engineered to express human Aβ. Depending on the tissue or timing of Aβ expression, transgenic worms can have readily measurable phenotypes that serve as a read-out of Aβ toxicity. For example, transgenic worms with pan-neuronal Aβ expression have defects is associative learning (Dosanjh et al. 2009), while transgenic worms with constitutive muscle-specific expression show a progressive, age-dependent paralysis phenotype (Link, 1995; Cohen et al. 2006). One particularly useful C. elegans model employs a temperature-sensitive mutation in the mRNA surveillance system to engineer temperature-inducible muscle expression of an Aβ transgene, resulting in a reproducible paralysis phenotype upon temperature upshift (Link et al. 2003). Treatments that counter Aβ toxicity in this model [e.g., expression of a protective transgene (Hassan et al. 2009) or exposure to Ginkgo biloba extracts (Wu et al. 2006)] reproducibly alter the rate of paralysis induced by temperature upshift of these transgenic worms. Here we describe our protocol for measuring the rate of paralysis in this transgenic C. elegans model, with particular attention to experimental variables that can influence this measurement.

The age of plates has a significant affect on the paralysis assay, as older plates tend to dry out. Use plates poured within one week of paralysis assay. For ideal results, pour plates 3-4 days before initiation of synchronous worm populations [see (2) below]. For any experiment, only use plates poured from the same batch.

Altering the size of the lawn (i.e. spotted vs. spread) and/or the type of bacteria will also alter the behavior of the worms. Paralysis assays can be performed using alternative E. coli strains as a food source (e.g., the HT115 strain used in feeding RNAi experiments), but this can change the kinetics of paralysis, thus requiring appropriate internal controls.

Strain CL4176 (smg-1(cc546ts) I; dvIs27 [myo-3/ Aβ minigene + rol-6(su1006) marker gene] X is most commonly used for assaying Aβ-induced paralysis. This strain and other transgenic models are available to academic researchers for a nominal fee from the Caenorhabditis Genetics Center (http://www.cbs.umn.edu/CGC/).

The stage of embryonic development when eggs are laid (~ the 26-cell stage for wild type worms under optimal conditions) is a function of adult age and nutrition. If the gravid adults used for preparation of the test population are older or starved, later stage eggs will be laid, reducing the age synchrony of the population and the reproducibility of paralysis kinetics. It is essential than mono-axenic (i.e., only OP50 bacteria) cultures are used (microbial contaminants can severely affect this assay), and reproducibility is highest if the triplicate plates have similar numbers of worms.

The upshift of transgenic myo-3/Aβ worms must occur before they reach the mid L4 stage for paralysis to be initiated, as the myo-3 promoter is developmentally regulated, and has significantly reduced expression in late L4 or adult worms. Similarly, expression of this transgene is blocked if worms become starved, so it is essential that the worms are well-fed throughout the experiment. We have never observed a paralyzed worm to recover under any conditions, and after 12-16 hr of upshift, all CL4176 worms will paralyze, even if they are downshifted to 16°C. In strain CL4176, sufficient upregulation of transgene expression to cause paralysis can occur at lower temperatures (i.e., 20-25°C) although the timing of paralysis will be altered. The paralysis rate depends on the specific transgenic strain used (we have constructed myo-3/Aβ strains with both faster and slower rates than CL4176), so with alternative strains the scoring window may need to be adjusted.

Shown in Figure 1 is a plot of a paralysis curve for CL4176, both untreated and exposed to 6.27 mM caffeine (final concentration in NGM plate). This treatment results in a highly statistically significant delay in paralysis of approximately 4 hrs, which we interpret as indicative of suppression of Aβ toxicity in this model. Shown in Figure 2 is an independent experiment assaying the effects of cafestol, another compound found in coffee. This plot is typical for treatments that do not impact Aβ toxicity. Note that in both experiments about half the untreated CL4176 populations are paralyzed at 24 hr, and paralysis is complete by 28 hr. These are typical timeframes for paralysis of control CL4176 populations. Significant deviations from this timing are indicative of altered environmental conditions or spontaneous deletion of transgene copies. (CL4176 contains a chromosomally-integrated transgenic array with multiple copies of the myo-3/Aβ transgene. Although this transgenic array is normally quite stable, any propagation of the strain at temperatures >16°C will select for rare worms that have undergone a spontaneous deletion of transgenes, resulting in variants that will have reduced Aβ expression and slower paralysis results.) 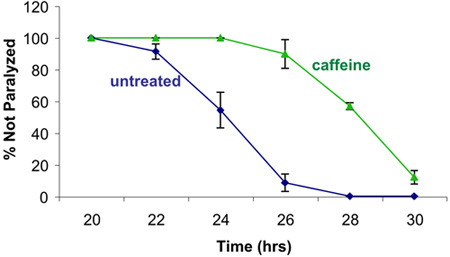 The protocol we have described can be effectively used to assay the effects of compounds on Aβ toxicity. Published examples include the effects of Ginkgo biloba extract constituents (Wu et al. 2006) and reserpine (Arya et al. 2009). Compounds that have been protective against Aβ toxicity in other systems have also been shown to be protective in this model (e.g., memantine, our unpublished results). An important rationale for establishing this model is that the well-developed genetic and molecular tools available in C. elegans can be used to investigate mechanisms of Aβ toxicity. Thus, the effects specific mutations on Aβ toxicity can be assayed (e.g., the effect of reducing insulin-like signaling by introducing a daf-2 loss-of-function mutation, Florez-McClure et al. 2007), and this model can also be used to examine the effects of over-expression transgenes (Fonte et al. 2008). We have recently made extensive use of this model to examine the effects on toxicity of single amino acid substitutions in Aβ (unpublished data).

The transgenic model described here assays the effect of acute Aβ expression on muscle cell function. At the time of paralysis muscle cells and their sarcomere are intact; the paralysis phenotype is not the result of muscle cell death. However, after paralysis ( ~48 hr after initial upshift) there is a breakdown of muscle integrity and eventual death of the worms. We have not investigated this downstream effect of Aβ expression or used it as a toxicity marker.

We would like to thank current and former members of the Link lab who helped develop the protocols described here, particularly Gin Fonte, who developed the original procedure. This work has been supported by awards from the NIH (AG12423) and the Alzheimer's Association (Zenith Award) to C.D.L. 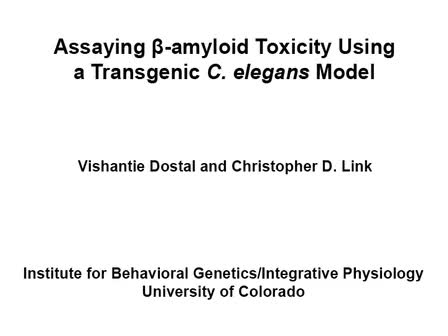