In this report we demonstrate techniques that can be used to investigate the biology of the crayfish hindgut. We show how to dissect a crayfish abdomen and study the associated anatomy, physiology and modulation of activity. The peristaltic activity and strength of contractions are measured using a force transducer.

The purpose of the report is to describe dissection techniques for preparing the crayfish hindgut and to demonstrate how to make physiological recordings with a force transducer to monitor the strength of contraction. In addition, we demonstrate how to visually monitor peristaltic activity, which can be used as a bioassay for various peptides, biogenic amines and neurotransmitters. This preparation is amenable to student laboratories in physiology and for demonstrating pharmacological concepts to students. This preparation has been in use for over 100 years, and it still offers much as a model for investigating the generation and regulation of peristaltic rhythms and for describing the mechanisms underlying their modulation. The pharmacological assays and receptor sub-typing that were started over 50 years ago on the hindgut still contribute to research today. This robust preparation is well suited to training students in physiology and pharmacology.

The most recent comprehensive overview of the crayfish hindgut was complied in a dissertation by Dr. Barbara E. Musolf (2007, Georgia State University, Atlanta, Georgia, USA), who focused primarily on serotonergic modulation and innervation (Musolf et al., 2009). Crustacean hindguts were first studied over 100 years ago by Alexandrowicz, a pioneer in comparative anatomy (Alexandrowicz, 1909), who described the various aspects of their innervation. Research continued over the years, identifying the types of muscle layers and architecture, addressing the overall function of the hindgut in osmoregulation for the whole animal, and examining modulatory control of hindgut contractility by various compounds (see review by Musolf, 2007). It is interesting to note that the anal portion of the hindgut acts not only to expel feces but also to take up the water from the environment for osmoregulation. This region of the gut can undergo forward or reverse peristalsis depending on the animal's needs.

Alexandrowicz (1909) identified two nerve plexuses innervating the crustacean hindgut, an inner plexus and an outer plexus, which later proved to be rich sources for identifying and characterizing neurotransmitters. In the 1950's Dr. Ernst Florey began a series of pharmacological studies on the crayfish hindgut and demonstrated that contractions are modulated by acetylcholine and its related compounds and also by epinephrine and norepinephrine (Florey, 1954). Florey, the discoverer of an inhibitory substance known as "Factor-I," studied the effects of this substance on various preparations, including the GI system in crayfish (Florey, 1961). Factor-I was later shown to be GABA. Thus, the crayfish hindgut played an important role in the early studies of synaptic inhibition.

Following the discovery of GABA, other putative transmitters were also shown to be associated with the hindgut plexuses and to elicit physiological responses. Such transmitters include dopamine (Elekes et al. 1988; Elofsson et al. 1968), proctolin (RYLPG-OH; Mercier et al. 1997) two orcokinin peptides (NFDEIDRSGFGFN and AFDEIDRSGFGFN; Bungart et al. 1994; Dircksen et al. 2000), orcomyotropin (FDAFTTGFamide; Dircksen et al. 2000) and a myosuppressin peptide (Mercier et al. 1997; most likely pQDLDHVFLRFamide, cf. Stemmler et al. 2007). Each of these substances modulates spontaneous hindgut contractions, and all except GABA appear to be excitatory. The hindgut also responds to glutamate and quisqualate (Jones, 1962; Wrong et al. 2003), but clear evidence for glutamatergic innervation has not been reported. Intracellular messengers that mediate the effects of the various transmitters are largely unexplored, but there is evidence for the involvement of cAMP in dopamine's ability to enhance contractions (Knotz & Mercier, 1995).

Although the crustacean hindgut contracts spontaneously following denervation, such contractions are typically weak and disorganized (Wales, 1982; Winlow & Laverack, 1972a). Peristaltic movement requires coordinated motor output from the central nervous system, apparently originating in the last abdominal ganglion (Winlow & Laverack, 1972a, b, c). In crayfish, the motor output is carried to the hindgut through the 7th abdominal root, which contains 75 axons whose cell bodies are localized in the last abdominal ganglion (Kondoh & Hisada, 1986). At least some of the peptides appear to be supplied to the hindgut plexus from neurons originating in the last abdominal ganglion (Dircksen et al. 2000; Mercier et al. 1991b; Siwicki & Bishop, 1986), but dopamine is supplied by neurons in more anterior ganglia (Mercier et al. 1991a). Since motor output through the 7th abdominal root is necessary for large, coordinated contractions, it is likely that some or all of the putative transmitters listed above contribute in some way to peristalsis. Their relative contributions, however, are not known. Some insight may be gained by studying their effects on circular and longitudinal muscles separately (Mercier & Lee, 2002).

This report is primarily a teaching tool for advanced high school and undergraduate students in physiology courses that participate in experimentation. The significance as well as the potential mechanism behind how the hindgut contracts and functions can be addressed by the students. Pharmacological agents, neurotransmitters, and neurohormones will be used, and dose-response curves will be constructed, which will engage students in how to acquire and interpret physiological and pharmacological data. A general understanding of receptor function with regard to agonists and antagonists can also be achieved. The students will also learn to present data in graphical form for statistical analysis.

It is very easy to dissect and record contractions from the crayfish hindgut. In the dissected preparation, the gut is easily exposed to exogenous substances. The alteration in peristaltic activity can be monitored visually or with a force transducer, which can also monitor the force of contractions. Because of its simplicity and reliability as a bioassay preparation, the crayfish hindgut is still very useful for investigating many research questions about the mechanisms of peristalsis, modulation of motor output and muscle contraction, and receptor function. The hindgut is also useful for testing insecticides, crustaceancides, and pollutants for specific mechanisms of actions.

3.1 ) Measuring the rate and force of contractions

To index the force of contractions a relative measure could be used to compare different conditions. On the saved file one can use the marker "M" and move to the baseline. Then use the cursor and move to the peak of the deflection and take note of the value listed on the top right of the screen as a delta value (the difference from M to the peak). Note the cursor needs to be kept stationary for the measure of the change. Then move the M to the next wave form of interest and repeat the measure.

The details provided in the associated movie and text describe the key steps needed to record the activity in the hindgut of the crayfish in situ as well as in vitro. One goal of our report is to increase the awareness to the potential of this preparation in student-run investigative laboratories that teach fundamental concepts in physiology and pharmacology.

These preparations can be used to investigate a number of experimental questions that will lead to a better understanding of the physiological functions of the hindgut. The mechanisms underlying regulation of peristaltic waves and their reversal are still not known. The mechanisms for higher control of the entire GI tract are also not fully understood. The question of how higher centers integrate their activity with the autonomic output that directly controls the GI system remains an open area of investigation (Shuranova et al., 2006). In addition, the osmoregulatory capabilities of the crustacean hindgut and the functions of osmoregulation during molting and environmental stress have not been fully elucidated. There are still many questions awaiting answers in this preparation.

Supported by University of Kentucky, Department of Biology, Office of Undergraduate Studies and College of Arts & Sciences. 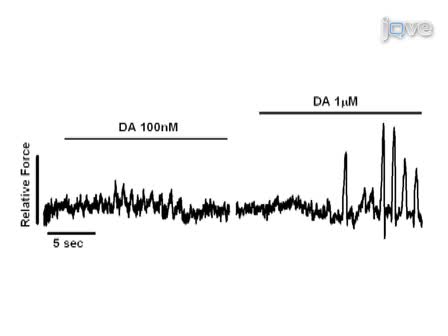