A simple and reliable method on isolation and culture of neural stem cells from discarded human fetal cortical tissue is described. Cultures derived from known human neurological disorders can be used for characterization of pathological cellular and molecular processes, as well as provide a platform to assess pharmacological efficacy.

Neural stem cells (NSCs) reside along the ventricular zone neuroepithelium during the development of the cortical plate. These early progenitors ultimately give rise to intermediate progenitors and later, the various neuronal and glial cell subtypes that form the cerebral cortex. The capacity to generate and expand human NSCs (so called neurospheres) from discarded normal fetal tissue provides a means with which to directly study the functional aspects of normal human NSC development 1-5. This approach can also be directed toward the generation of NSCs from known neurological disorders, thereby affording the opportunity to identify disease processes that alter progenitor proliferation, migration and differentiation 6-9. We have focused on identifying pathological mechanisms in human Down syndrome NSCs that might contribute to the accelerated Alzheimer's disease phenotype 10,11. Neither in vivo nor in vitro mouse models can replicate the identical repertoire of genes located on human chromosome 21.

Here we use a simple and reliable method to isolate Down syndrome NSCs from aborted human fetal cortices and grow them in culture. The methodology provides specific aspects of harvesting the tissue, dissection with limited anatomical landmarks, cell sorting, plating and passaging of human NSCs. We also provide some basic protocols for inducing differentiation of human NSCs into more selective cell subtypes.

1. Preparation of solutions and materials for dissection and maintenance of neural stem cell culture

3. Manipulaton of neural stem cells for further characterization or experimentations 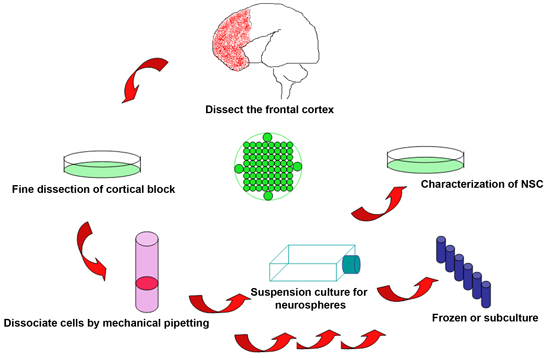 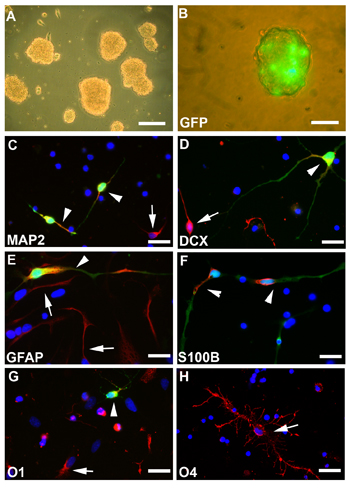 Figure 2. Undifferentiated and differentiated human neural cells propogated in vitro. (A) Neurospheres are shown under phase contrast microscopy demonstrate smooth, round borders and rapid growth after culture for over 1 week. (B) Introduction of various plasmids and constructs can be achieved through transfection. Three days following EGFP-C1 transfection, multiple cells show expression of the green fluorescent protein as seen under fluoroscein immunostaining and fluorescence microscopy. EGFP-C1 transfected neurospheres are dissociated and differentiated under different conditions into neurons (C, D), astrocytes (E, F) and oligodendrocytes (G, H) and seen under rhodamine fluorescence. Concurrently, transfected EGFP positive cells are shown under fluoroscein fluorescence. Transfected cells (white arrow heads) are indistinguishable from untransfected cells (white arrows). The cell nuclei are stained with Hoechst33342. Scale bars are 200 μm for A, 100 μm for B and 25 μm for C-H. 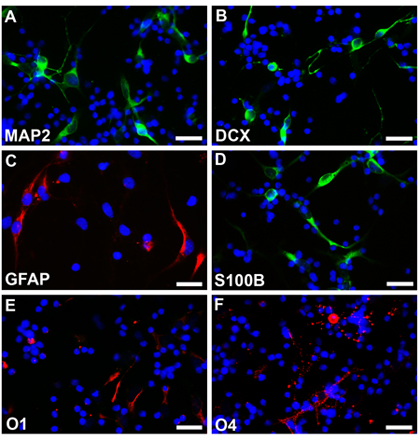 Figure 3. Neurospheres without transfection are dissociated and differentiated under different conditions into neurons (A, B, fluoroscein), astrocytes (C, rhodamine, D, fluoroscein) and oligodendrocytes (E, F, rhodamine). The cell nuclei are stained with Hoechst33342. Scale bars are 25 μm for A-F.

There are various approaches toward culture fresh tissue and producing human cell lines. Historically, fresh tissue has been harvested and cultured immediately to generate various cell types in the central nervous system. This approach however is clearly limited by the number of samples that can be obtained- which in the case for human samples, is usually quite small. Given the minimal degree of manipulation, freshly cultured neural cells provide the most reliable experimental system by limiting potential artifacts from extended culturing. The limited supply led to a second approach of generating human cell lines that had been immortalized through insertion of various oncogenes 12, 13. The concern for this approach lay in the possibility that oncogenic manipulation of these cells would alter the cell properties. Additionally, part of the rationale for generating human cell lines was the potential for transplantation and treatment of various human disorders. Immortalized cell lines could predispose to the risk of cancer growth. The advantage to these cell lines is the uniformity of the lines, their ability to adopt the various neuronal and glial phenotypes inherent in a region of the brain, and the ease of generating large number of cultures. To overcome the potential oncogenic limitations, various approaches have been used for culturing primary human neural stem cells. Most methods are based on EGF and bFGF manipulation of cells, with adhesion or suspension culture techniques. These different approaches result in different purities of NSC 14. Svendsen et al. reported a method of NSC culture by section of formed neurospheres with the cell–cell contacts maintained (15), which can give a rich production of NSC in a short time. However, oligodendrocyte can not be obtained with these neurospheres at later passages. Enriching neurospheres with EGF and bFGF can also alter the transcriptional and cellular phenotypes in vitro 14. Use of early passage cultures provides a reasonable compromise between the need for large numbers of cultures and the least concern for introduction of culture artifact. Most recently, advances have been made in the generation of induced pluripotent stem cells by forced expression of a subset of genes required to maintain stem cell properties. IPS cells have the advantage of providing large quantities of human cells as well as the potential to generate all different types of cells that comprise the human body. Currently, this last advantage also makes this model system less appealing in that the signaling mechanisms to transform cells to a particular cell type (i.e. forebrain neurons) are not known.

The current methods described for generation of human NSCs provide some slight variations from other published approaches. Most previous methods use various enzymatic or chemical means of cell dissociation (trypsin or papain) to dissociate the NSC from fetal cortex. In general, given the large quantity of tissue, we use gentle mechanical trituration with fine cell filtration to obtain viable single cells which have undergone minimal manipulation. Moreover, this approach minimizes the time from tissue harvest to tissue culturing/ storage, which is critical for human samples.

This protocol describes how to isolate human neural stem cells from discarded frontal cortical tissue 7,9,10,11. The methodology for isolating the neurospheres varies slightly between human and mice, with the approach described here optimized for obtaining single- cell suspensions in human tissue samples. There are several considerations in the use of human tissue. First and foremost is limiting the time after fetal demise prior to onset of cell dissociation and harvesting. This problem can be mitigated by prior scheduling of elective abortions and maintaining samples at 4°C. Second, it is important to try to identify landmarks for dissociation of the cortical tissue. Toward this end, it is useful to inform the physician performing the abortive procedure to try to maintain brain integrity when possible. Third, it is important to realize that the scale of the human fetal brain even at 18-22 weeks far exceeds that of even an adult mouse or rat and therefore, the need to perform the dissociation, filtration, and washing with a larger throughput system (i.e. larger plastic ware, 10 ml plastic pipets vs glass polished pipets, multiple samples processed in parallel). Fourth, the cells are mechanically dissociated and it is not necessary to make sure all the tissue fragments are gone. Rather it is preferable to minimize trituration as much as possible, with the understanding that filtration will remove the unwanted larger tissue fragments and separate enough individual NSCs from the larger sample for culturing. Fourth, the reagents chosen are optimized for human neurospheres. Finally, one should try not to disturb individual cells after they are plated, so as to minimize aggregation.

Once the human neural stem cells have formed clonal spheres, they can be dissociated into single cells as described above, and passaged to ascertain self-renewal capabilities or differentiated into the different cell types using different combinations of growth factors and/or proteins. 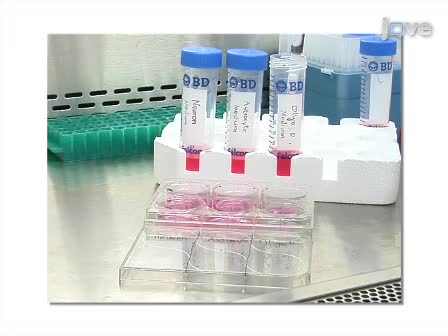