Due to the simplicity of surgery and the robust behavioural outcome, chronic constriction of the sciatic nerve is one of the pre-eminent animal models of neuropathic pain. Within 24 hrs following surgery, pain hypersensitivity is established and can be quantitatively measured using a von Frey aesthesiometer (mechanical test) and plantar analgesia meter (thermal test).

Chronic neuropathic pain, resulting from damage to the central or peripheral nervous system, is a prevalent and debilitating condition, affecting 7-18% of the population1,2. Symptoms include spontaneous (tingling, burning, electric-shock like) pain, dysaesthesia, paraesthesia, allodynia (pain resulting from normally non-painful stimuli) and hyperalgesia (an increased response to painful stimuli). The sensory symptoms are co-morbid with behavioural disabilities, such as insomnia and depression. To study chronic neuropathic pain several animal models mimicking peripheral nerve injury have been developed, one of the most widely used is Bennett and Xie's (1988) unilateral sciatic nerve chronic constriction injury (CCI)3 (Figure 1). Here we present a method for performing CCI and testing pain hypersensitivity.

CCI is performed under anaesthesia, with the sciatic nerve on one side exposed by making a skin incision, and cutting through the connective tissue between the gluteus superficialis and biceps femoris muscles. Four chromic gut ligatures are tied loosely around the sciatic nerve at 1 mm intervals, to just occlude but not arrest epineural blood flow. The wound is closed with sutures in the muscle and staples in the skin. The animal is then allowed to recover from surgery for 24 hrs before pain hypersensitivity testing begins.

For behavioural testing, rats are placed into the testing apparatus and are allowed to habituate to the testing procedure. The area tested is the mid-plantar surface of the hindpaw (Figure 2), which falls within the sciatic nerve distribution. Mechanical withdrawal threshold is assessed by mechanically stimulating both injured and uninjured hindpaws using an electronic dynamic plantar von Frey aesthesiometer or manual von Frey hairs4. The mechanical withdrawal threshold is the maximum pressure exerted (in grams) that triggers paw withdrawal. For measurement of thermal withdrawal latency, first described by Hargreaves et al (1988), the hindpaw is exposed to a beam of radiant heat through a transparent glass surface using a plantar analgesia meter5,6. The withdrawal latency to the heat stimulus is recorded as the time for paw withdrawal in both injured and uninjured hindpaws. Following CCI, mechanical withdrawal threshold, as well as thermal withdrawal latency in the injured paw are both significantly reduced, compared to baseline measurements and the uninjured paw (Figure 3). The CCI model of peripheral nerve injury combined with pain hypersensitivity testing provides a model system to investigate the effectiveness of potential therapeutic agents to modify chronic neuropathic pain. In our laboratory, we utilise CCI alongside thermal and mechanical sensitivity of the hindpaws to investigate the role of neuro-immune interactions in the pathogenesis and treatment of neuropathic pain.

Aseptic techniques should be used for the surgical procedure. Disinfect the surgical work surface with 70% ethanol and prepare in advance sterile instruments (e.g., fine scissors, forceps, and retractor), gauzes, staples and swabs by autoclaving. For multiple surgeries, clean and resterilise instruments with 70% ethanol or a dry bead steriliser between rats. A surgical mask, hair bonnet and sterile gloves should be worn.

For constriction of the nerve, prepare the chromic gut suture by cutting it into small pieces of about 3 cm length immersed in sterile saline, to prevent drying. For closing the wound, use commercially available sterile silk sutures.

Manual von Frey hairs are a series of increasing diameter filaments which are calibrated to induce a specific force when applied to the skin. They can be used as an alternative to an electronic dynamic plantar von Frey aesthesiometer for measurement of paw withdrawal threshold, as previously described4. There are also several alternative manufacturers of electronic von Frey aesthesiometers (e.g. IITC, USA and Somedic, Sweden).

The infrared (I.R.) heat intensity of the plantar test instrument should be adjusted before starting the experiment. In our laboratory, we adjust the I.R. intensity to give an average paw withdrawal latency of about 10 seconds in naïve rats, and we set the cut-off latency at 20 seconds to avoid tissue damage in case of failure to remove a paw. 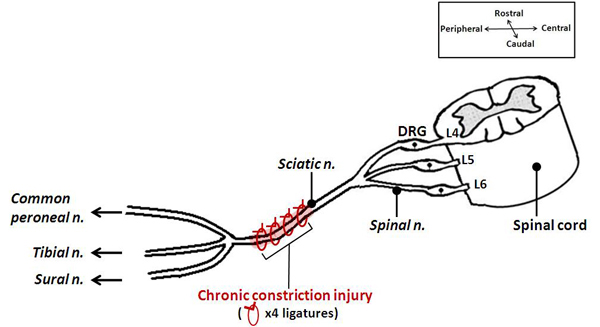 Figure 1. A schematic illustrating the positioning of the ligatures in the CCI model. This animal model of neuropathic pain involves placement of four loose chromic-gut ligatures on the sciatic nerve, at mid-thigh level. It results in injuring only a portion of the afferents going to the foot and subsequent pain hypersensitivity of the hindpaw. 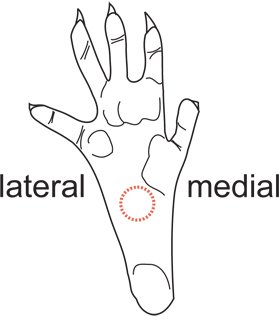 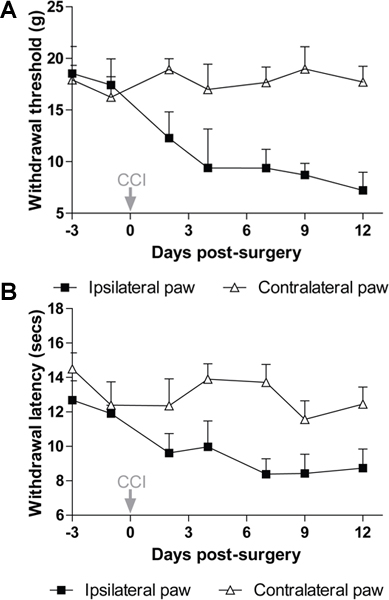 CCI is a widely used peripheral nerve injury model of chronic neuropathic pain. It is relatively simple to perform, and produces robust and stable pain hypersensitivity for at least one month after injury. Following CCI, rats exhibit abnormal posture of the injured hindpaw (toes held together and plantar-flexed and paw everted), as well as repeated shaking, guarding and licking of the injured hindpaw suggesting the presence of spontaneous pain9. In addition to sensory dysfunction, several investigators have shown that CCI evokes behavioural disabilities, such as disrupted social interactions, sleep disturbances, depressive-like and anxiety-like behaviours10-13, however this is in contrast to the failure to find such behavioural disabilities by others14,15. CCI is therefore commonly used to investigate both the pathophysiology, and potential therapeutic agents for treatment of neuropathic pain.

We describe unilateral constriction of the left sciatic nerve, however it should be noted that many experimenters have performed CCI on the right sciatic nerve, with similar pain and behavioural outcomes. Some investigators may find it easier to perform surgery on a specific side due to handedness, whilst others have switched sides within experiments to rule out any bias. It is noteworthy that several variations to the original procedure have been reported including using only 2 ligatures around the nerve16,17 and using suture material other than chromic gut such as plain gut and polyglactin (vicryl)18,19 in rats. In addition, the CCI model has also been modified for use in mice, where the procedure is identical, except for the use of 2-3 ligatures with various suture materials including chromic gut, nylon, and prolene15,20,21.

One limitation of this model is the degree of variation amongst the rats subjected to CCI, due to variability in the tightness of the constrictions produced by tying knots with the sutures. This can be partially overcome by having an experienced researcher performing the surgery in a consistent way. Furthermore, the type of suture material used for ligating the nerve can also contribute to variability, and it is believed that chemicals from the chromic gut mediate some of the behavioural and neurochemical effects observed in this model19,22. Special consideration should be given to the choice of the rat gender (males versus females)23, age (young versus old)24,25, diet26 and strain27, which can significantly influence the development of pain hypersensitivity following CCI.

Pain hypersensitivity testing, using an electronic von Frey aesthesiometer or manual von Frey hairs for mechanical withdrawal threshold and a plantar analgesia (Hargreaves) meter for thermal withdrawal latency, are well established and reliable quantitative measures of pain hypersensitivity in small animals. Their use, in combination with models of neuropathic pain, are widespread and allow for direct comparisons of paw sensitivity to mechanical and thermal stimuli across different treatment options, and between different strains of rats. It should be noted that other behavioural assays, such as the pin prick test and cold allodynia, are also used for testing CCI-induced pain hypersensitivity8.

While the use of reflexive withdrawal from mechanical or thermal stimuli is the major measure of neuropathic pain in this model and others, it has recently been criticised for its poor correlation with human symptoms and the involvement of considerable experimenter bias28. Therefore, the use of additional paradigms such as operant measures of pain29 and spontaneously emitted behaviours30 would be beneficial.

Nevertheless, despite these limitations, the CCI model and the paw withdrawal tests for measuring pain hypersensitivity are pivotal for understanding the mechanisms of neuropathic pain and identifying new analgesic targets. In our laboratory, we routinely perform CCI and measure mechanical paw withdrawal thresholds and thermal paw withdrawal latencies, in order to understand how neuro-immune interactions contribute to neuropathic pain31, and assess the potential of modulating the immune system to reduce pain hypersensitivity.

Experiments on animals were approved by the Animal Care and Ethics Committee of the University of New South Wales, Australia, and followed guidelines issued by the International Association for the Study of Pain.

The authors would like to acknowledge the original description of the CCI model by Bennett and Xie (1988). 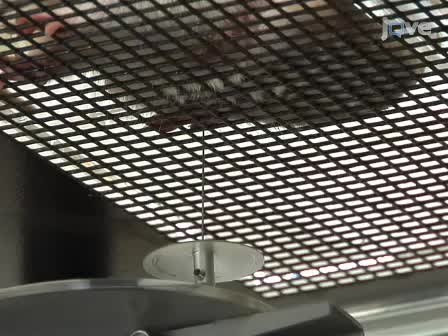