We describe a methodology combining automated cell culturing with high-content imaging to visualize and quantify multiple cellular processes and structures, in a high-throughput manner. Such methods can aid in the further functional annotation of genomes as well as identify disease gene networks and potential drug targets.

The functional annotation of genomes, construction of molecular networks and novel drug target identification, are important challenges that need to be addressed as a matter of great urgency1-4. Multiple complementary 'omics' approaches have provided clues as to the genetic risk factors and pathogenic mechanisms underlying numerous neurodegenerative diseases, but most findings still require functional validation5. For example, a recent genome wide association study for Parkinson's Disease (PD), identified many new loci as risk factors for the disease, but the underlying causative variant(s) or pathogenic mechanism is not known6, 7. As each associated region can contain several genes, the functional evaluation of each of the genes on phenotypes associated with the disease, using traditional cell biology techniques would take too long.

There is also a need to understand the molecular networks that link genetic mutations to the phenotypes they cause. It is expected that disease phenotypes are the result of multiple interactions that have been disrupted. Reconstruction of these networks using traditional molecular methods would be time consuming. Moreover, network predictions from independent studies of individual components, the reductionism approach, will probably underestimate the network complexity8. This underestimation could, in part, explain the low success rate of drug approval due to undesirable or toxic side effects. Gaining a network perspective of disease related pathways using HT/HC cellular screening approaches, and identifying key nodes within these pathways, could lead to the identification of targets that are more suited for therapeutic intervention.

High-throughput screening (HTS) is an ideal methodology to address these issues9-12. but traditional methods were one dimensional whole-well cell assays, that used simplistic readouts for complex biological processes. They were unable to simultaneously quantify the many phenotypes observed in neurodegenerative diseases such as axonal transport deficits or alterations in morphology properties13, 14. This approach could not be used to investigate the dynamic nature of cellular processes or pathogenic events that occur in a subset of cells. To quantify such features one has to move to multi-dimensional phenotypes termed high-content screening (HCS)4, 15-17. HCS is the cell-based quantification of several processes simultaneously, which provides a more detailed representation of the cellular response to various perturbations compared to HTS.

HCS has many advantages over HTS18, 19, but conducting a high-throughput (HT)-high-content (HC) screen in neuronal models is problematic due to high cost, environmental variation and human error. In order to detect cellular responses on a 'phenomics' scale using HC imaging one has to reduce variation and error, while increasing sensitivity and reproducibility.

Herein we describe a method to accurately and reliably conduct shRNA screens using automated cell culturing20 and HC imaging in neuronal cellular models. We describe how we have used this methodology to identify modulators for one particular protein, DJ1, which when mutated causes autosomal recessive parkinsonism21.

Combining the versatility of HC imaging with HT methods, it is possible to accurately quantify a plethora of phenotypes. This could subsequently be utilized to advance our understanding of the genome, the pathways involved in disease pathogenesis as well as identify potential therapeutic targets.

Image quality is paramount for conducting a sensitive and reliable HCS. Damage to the cellular monolayer due to inaccurate pipetting can lead to poor image quality and irreproducible results. In order to minimize cell layer damage, the immunostaining was conducted using a robotic station. The procedure is similar to one that has been previously described26 but has been customized to increase throughput and reduce consumable usage.

Mutations within DJ1 give rise to early onset-recessive parkinsonism21, but it is unclear how loss of DJ1 gives rise to the disease phenotype. It is known that cells deficient of DJ1 are more susceptible to oxidative stress-induced cell death and in response to oxidative stress, DJ1 translocates from the cytoplasm to the mitochondria 29, 30. By constructing HC assays to monitor these phenotypes, we can identify genes that regulate or affect phenotypes associated with DJ1. This approach can help decipher the pathways within which DJ1 functions and that could be involved in disease pathogenesis.

Example of an epistatic interaction with DJ1 (Figure 5): Knockdown of DJ1 in cells exposed to toxin results in a greater loss of cell viability (BAR-B: image-B) compared to cells infected with scrambled lentivirus (BAR-A: image-A). Knockdown of target gene A has a similar effect to that observed in cells with a DJ1 knockdown (BAR-C: image-C). Knockdown of both DJ1 and target gene A results in a significantly greater loss of cell viability than loss of either gene alone (BAR-D: image-D). This suggests an epistatic interaction between DJ1 and target gene A.

Example of a gene involved in neuronal outgrowth (Figure 7): Knockdown of target gene C in wild type SH-SY5Y cells results in a significant increase in neurite length (BAR-B: image-B) compared to cells infected with lentivirus expressing scrambled shRNA (BAR-A: image A). This effect is lost in cells incubated with toxin (BAR-C and D). 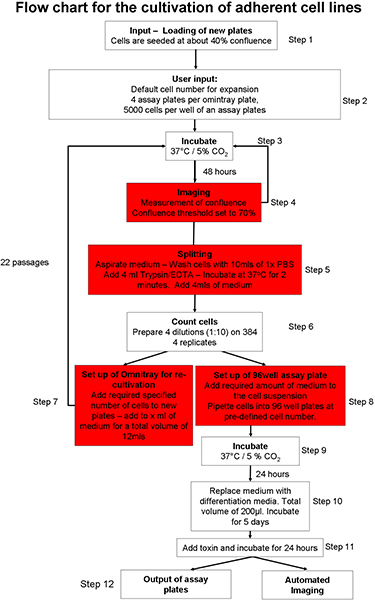 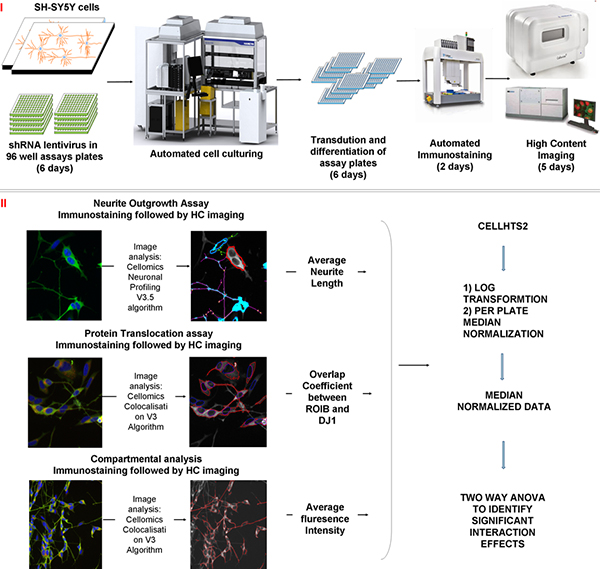 Figure 2. Schematic overview of the screening process, image analysis and statistical methods used during the screening process: i) Cells are cultured until they are confluent and subsequently plated into the assay plates containing the shRNA lentivirus. Cells are differentiated for 5 days and toxin is then added to the plates for 24 hours. Assay plates are output from the system and immunostained. The amount of time taken for each of the processes is indicated in brackets. ii) Data is acquired using a HC imager (cell viability, protein translocation and neuronal outgrowth) and an automated confocal imager (mitochondrial morphology). Data are exported to CellHTS2 package within R, base (2) log transformed and normalized. Two-way ANOVA is used to identify significant interactions between the different variables. Please click here to see a large version of this figure.

Figure 3. Composite images of cells acquired by HC imaging. A) Untreated cells, B) Cells treated with H2O2. DJ1 is labeled in green, the mitochondria in red and the nuclei in blue. Neurite staining is not highlighted.

Figure 5. Identification of a gene in epistasis with DJ1 (letters on the bars correspond to the lettering on the images). Images A through D are SH-SY5Y cells labeled with Mitotracker CMXRos (red) that was used for quantification of cell health.

Figure 7. Identification of a gene involved in neuronal outgrowth (letters on the bars correspond to the lettering on the images). Images A through D are SH-SY5Y cells labeled for β-III tubulin (green) and nuclei (blue) which were used for quantification of neurite length.

Figure 8. Identification of a gene involved in regulating mitochondrial morphology. Image A and C are composite images of SH-SY5Y cells infected with scrambled shRNA or an shRNA targeting gene D respectively. Mitochondria are colored in red while nuclei are colored in blue. Image B and D are visualizations of the SER-Ridge quantification.

With the decreasing costs of HT/HC cellular screening systems, combined with the availability of powerful genome-wide tools to modify gene function, HT/HC screens are becoming commonplace in academia. The approach has already been successfully applied to diverse areas of research such as the identification of drug targets in cancer 9, 31-33 and embryonic development 34-36 and even has potential for application in deciphering the pathways involved in neuropsychiatric disorders 37,38. However implementation of such a system requires a significant investment of time and effort with process optimization often taking a minimum of 6 months. All steps, such as trypsinization times, pipetting speeds and seeding densities have to be adjusted, to ensure that cells are healthy and grow consistently. Prevention of bacterial contamination is one of the most difficult challenges facing automated cell culture with weekly cleaning protocols in combination with constant rinsing of all liquid bearing lines with 70% ethanol being necessary for contamination free cultures. It will be also necessary to improve the robotics so that additional instruments, such as confocal microscopes for higher resolution and -80°C freezers for compound storage can be integrated.

There are also limitations that need to be addressed to improve the sensitive, speed and utility of this method to study gene networks and identify genes involved in pathogenic molecular pathways.

To conduct a HT/HC screen and ensure that reliable data is collected, several aspects have to be optimized. First, reliability of the measurement is paramount and is dependent upon the robustness and sensitivity of the assay. For example, the assays described above are suitable for smaller screens, but are difficult to implement on a genome wide scale, due to the number processing steps required before image acquisition. Thus, one would have to construct stable cell lines expressing the reporter gene, which would allow for direct imaging and lead to decreased variation due to the reduced number of processing steps. At present, designing an assay that accurately depicts and reliably quantifies a phenotype of interest is a major bottleneck in the HC screening process.

Many screens are conducted in mammalian cells using different RNAi libraries, all of which suffer from off-target effects, limited gene silencing efficiency and incomplete genome coverage. Thus libraries need to be made which are more specific, potent and have better coverage. Efforts are underway to create such libraries (http://www.sigmaaldrich.com/life-science/functional-genomics-and-rnai/shrna/library-information.html) and it is hoped such endeavors will improve the reproducibility of HT/HC screen hits.

A limitation of many large scale cell based screens are that they are conducted in neuroblastoma cells because they can be genetically manipulated and cultured to large numbers with relative ease. However, the relevance of 'hits' identified in ex vivo cell culture models to in vivo function is questionable, especially as the brain consists of highly specialized cell types that form a dense and complicated network of synaptic connections to function as a highly integrated unit. As a consequence, it is common that hits identified using the screening approach described above, are validated in secondary screens using additional techniques and in more physiological relevant models 39. To improve the translation of hits identified during HCS, more representative and sophisticated models, such as primary cells and differentiated stem cells or co-culture systems need to be developed and adapted for HT/HC approaches.

With a combination of automated cell culturing and HC imaging one can rapidly gain new insights into how neurons function and determine which pathways are important to disease development. Combining HCS/HTS data with information generated from other 'omics' approaches, it will then be possible to construct a systems biology overview of brain diseases, thus facilitating therapeutic development.

We thank the Hamilton programmers and specialists for continuing support and Eva Blaas for technical assistance. This work was supported by two NWO Investment grants (911-07-031 and 40-00506-98-10011), The Prinses Beatrix Fonds Wetenschapsprijs 2009 and the Neuroscience Campus Amsterdam; S.J. is supported by Ti-Pharma: T5-207. 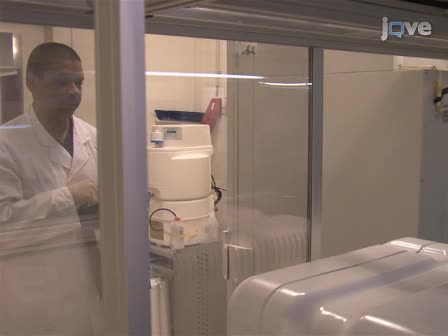