We present a protocol that permits to view and to quantitatively asses the morphology of the dendritic tree of individual Purkinje cells grown in organotypic cerebellar slice cultures. This protocol is intended to promote studies on the mechanisms of Purkinje cell dendritic development.

Cerebellar slice cultures are prepared from postnatal day 8 P(8) mouse pups using the static incubation method 10. In our laboratory, we use B6CF1 mice. In some experiments also transgenic mice were used which express EGFP selectively in Purkinje cells. The preparation of slice cultures takes approximately 30 minutes per mouse pup, i.e. 3 hours for a litter of 6 mouse pups. All steps are carried out under sterile conditions in a laminar flow workbench with sterilized surgical instruments.

An important advantage of the cerebellum is that antibodies are available that specifically and brightly stain the principal cerebellar neurons, i.e. Purkinje cells and granule cells. The dendritic morphology of Purkinje cells can be revealed by immunostaining with anti-calbindin D28K.

Development of the Purkinje cell dendritic tree is inhibited by PKC or mGluR1 stimulation
Organotypic cerebellar slice cultures were cultured for 11 days. Starting at the 2nd day in vitro, some of the cultures were treated with either PMA (50 nM), a phorbol ester stimulating PKC or DHPG (10 μM), a mGluR1 agonist, until the cultures were fixed. Both compounds have been shown previously to inhibit and limit Purkinje cell dendritic growth 7, 8, 9, 5. In the untreated control slices Purkinje cells developed a typical large and highly branched dendritic tree which was visualized either by anti-Calbindin immunostaining (Figure 4A) or in cultures with EGFP-expressing Purkinje cells, by immunostaining with anti-GFP (Figure 4D). In cultures treated with PMA the morphology of the dendritic tree was profoundly altered. The dendrites appeared thickened and had only few short side branches. Many Purkinje cells, unlike in control cultures, were no longer unipolar, with one primary dendrite emanating from the cell body, but developed two or even more primary dendrites (Figure 4B, E). The territory covered by the dendritic tree was markedly reduced (see below). A similar situation was present in DHPG-treated cultures. The dendritic tree of the Purkinje cells was greatly reduced in size and the branching was markedly reduced (Figure 4C, F). However, there were also some qualitative differences compared to PMA-treated cultures. There was no thickening of the dendritic branches, and the primary dendrites carried many very short secondary dendrites (Figure 4C, F) suggesting that the signaling events going on in PMA and DHPG-treated Purkinje cells may be similar, but not identical.

Quantitative evaluation of Purkinje cell dendritic tree size and branch points For quantitative evaluation, the size of the Purkinje cell dendritic tree and the number of branch points per Purkinje cell is measured as described above. Results from at least three independent experiments are pooled together, and a minimum of 20 cells need to be analyzed. The mean of the area covered by the dendritic trees for the control experiments is determined and set as 100%, and the values for the other experiments are expressed as percent values accordingly. Statistical analysis of the data is done with GraphPad Prism software. Because we do not assume that all values determined are part of a Gaussian distribution, we use statistical tests that do not assume such a distribution of the measured values. For comparing multiple conditions and testing for statistical significance, we use Kruskal-Wallis test followed by an appropriate procedure for post hoc tests for rank-based statistics, as, e.g., implemented in the Dunn's post test in GraphPad Prism. Results are typically presented as bar graphs. An example of such a statistical evaluation is given in Figure 5. Both the analysis of the dendritic tree size (Figure 5A) and the number of branch points per Purkinje cell (Figure 5B) show clear differences between the control condition and DHPG or PMA treatment. Both parameters were different with a statistical significance of p<0.001 according to the Kruskal-Wallis test.

Figure 2. Measurement of dendritic parameters of Purkinje cells. (A). The size of the dendritic tree can easily be measured by tracing the outline of the Purkinje cell with a single mouse click in the Image analysis software Image Pro plus using the magic wand tool. The magic wand tool is used such that the entire dendritic tree including the cell soma and all dendritic branches are completely encircled by the line. (B). The number of branch points is counted manually in images of Purkinje cells. Every branch point is marked with a yellow dot. Scale bar = 50 μm. 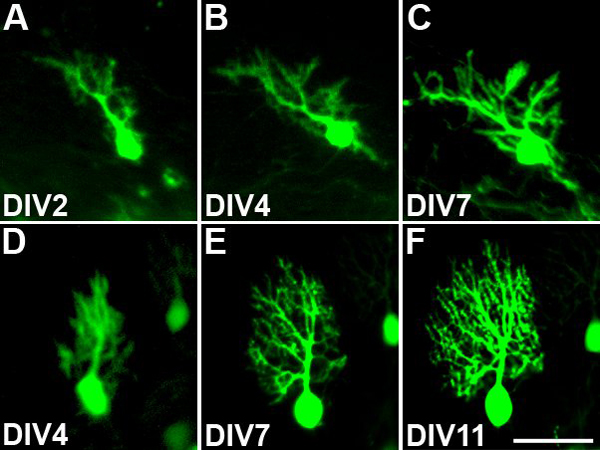 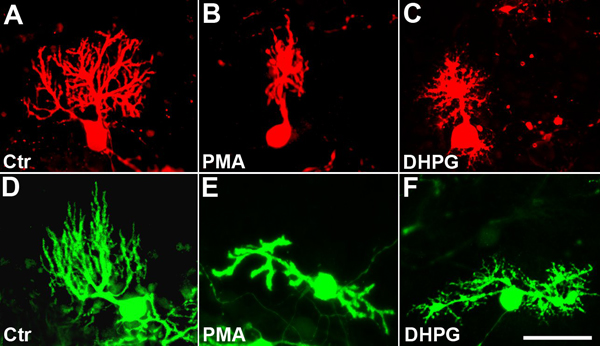 Figure 4. Development of the Purkinje cell dendritic tree is inhibited by PKC or mGluR1 stimulation. (A), (D): Untreated control cells with a well developed dendritic tree. (B), (E): After 9 days of PMA treatment dendrites appear thickened and the dendritic tree is strongly reduced in sized. Cells often lose their polarization and become bipolar (E). (C), (F): After 9 days of DHPG treatment the dendritic tree is greatly reduced in size. Unlike in the PMA treatment, many very fine and short side branches are present on the primary and secondary dendrites. Cells often lose their polarization and become bipolar (F). Purkinje cells were visualized by anti-Calbindin immunostaining in (A - C) and by EGFP-Expression in cultures derived from Pcp2-EGFP mice in (D - F). Scale bar = 50 μm. 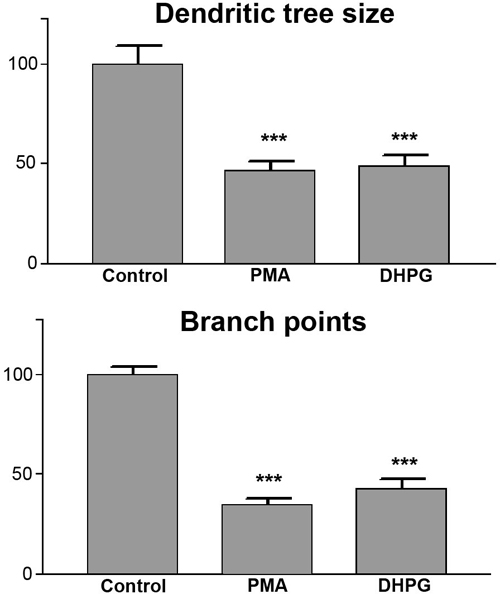 For the visualization of Purkinje cells in organotypic cerebellar slice cultures, we have focused only on two routine methods: the anti-Calbindin immunostaining and the use of mice with EGFP expressing Purkinje cells. Of course more methods are available, in particular biolistic or viral transfection with fluorescent proteins, diolistic labeling with fluorescent dyes and intracellular dye injections into single Purkinje cells. Depending on the requirements of the study and the equipment available in the laboratory these methods can significantly enhance the level of analysis of Purkinje cell dendritic morphology, for example by analyzing dendritic spines using confocal or two photon microscopy.

Animal experiments were carried out in accordance with the European Communities Council Directive of 24 November 1986 (86/609/EEC) and were reviewed and permitted by Swiss authorities. The authors have nothing to disclose.

This work was supported by the University of Basel, Department of Biomedicine, and the Swiss National Science Foundation (31003A-116624). 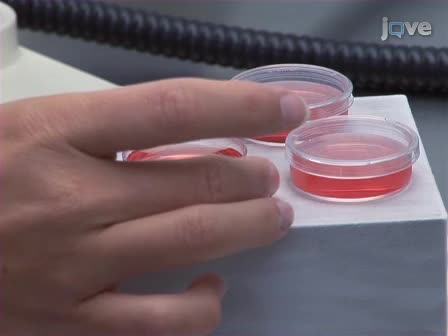