Circadian rhythms in voluntary wheel-running activity in mammals are tightly coupled to the molecular oscillations of a master clock in the brain. As such, these daily rhythms in behavior can be used to study the influence of genetic, pharmacological, and environmental factors on the functioning of this circadian clock.

When rodents have free access to a running wheel in their home cage, voluntary use of this wheel will depend on the time of day1-5. Nocturnal rodents, including rats, hamsters, and mice, are active during the night and relatively inactive during the day. Many other behavioral and physiological measures also exhibit daily rhythms, but in rodents, running-wheel activity serves as a particularly reliable and convenient measure of the output of the master circadian clock, the suprachiasmatic nucleus (SCN) of the hypothalamus. In general, through a process called entrainment, the daily pattern of running-wheel activity will naturally align with the environmental light-dark cycle (LD cycle; e.g. 12 hr-light:12 hr-dark). However circadian rhythms are endogenously generated patterns in behavior that exhibit a ~24 hr period, and persist in constant darkness. Thus, in the absence of an LD cycle, the recording and analysis of running-wheel activity can be used to determine the subjective time-of-day. Because these rhythms are directed by the circadian clock the subjective time-of-day is referred to as the circadian time (CT). In contrast, when an LD cycle is present, the time-of-day that is determined by the environmental LD cycle is called the zeitgeber time (ZT).

Although circadian rhythms in running-wheel activity are typically linked to the SCN clock6-8, circadian oscillators in many other regions of the brain and body9-14 could also be involved in the regulation of daily activity rhythms. For instance, daily rhythms in food-anticipatory activity do not require the SCN15,16 and instead, are correlated with changes in the activity of extra-SCN oscillators17-20. Thus, running-wheel activity recordings can provide important behavioral information not only about the output of the master SCN clock, but also on the activity of extra-SCN oscillators. Below we describe the equipment and methods used to record, analyze and display circadian locomotor activity rhythms in laboratory rodents. 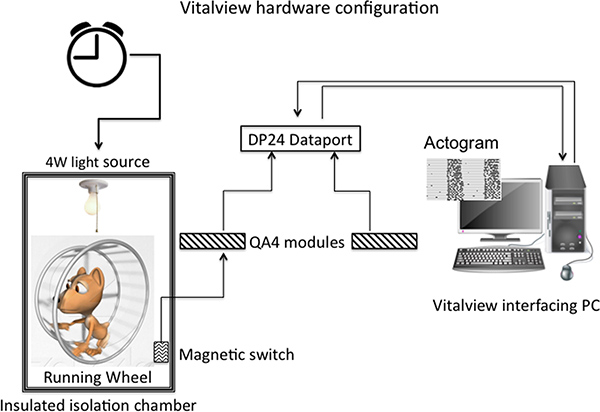 Figure 1. The Vitalview hardware configuration begins with a rodent running wheel, which is designed to activate a micro-switch with each revolution. This information then travels to the QA4 modules and is relayed to the DP24 dataport and finally is recorded by the Vitalview-equipped computer. The computer sums running-wheel revolutions from each channel every 10 min; these data can be viewed later as an actogram or periodogram. Depending on how the lights are set up, they can be controlled remotely either by the same Vitalview-equipped computer or by wall timers purchased from any electronics store. 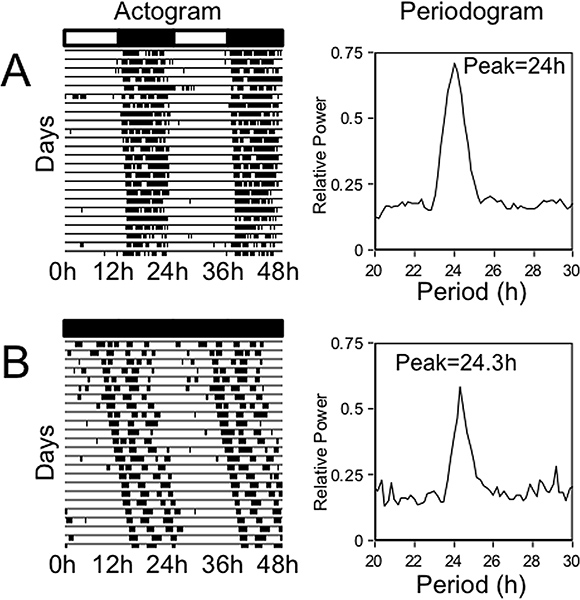 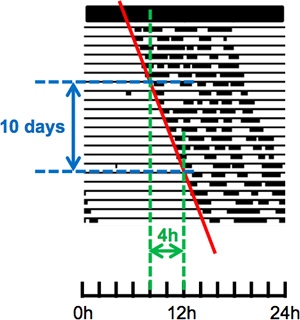 Figure 3. Period can also be extrapolated by hand. First draw a line of best-fit based on the daily onset of activity (red line). Next calculate the slope in h/day, remember that if the rhythm is <24 hr the slope will be a negative value, and finally add 24 hr. This procedure will provide an estimate of the circadian period for that animal. In this case, 4 hr/10 days suggests that the animal is becoming active approximately 0.4 hr later each day (slope 0.4 hr/day). Therefore, the circadian period is approximately 24.4 hr (or about 24 hr and 24 min). Any manipulation that is scheduled according to CT requires the free-running period to make an accurate prediction of CT. 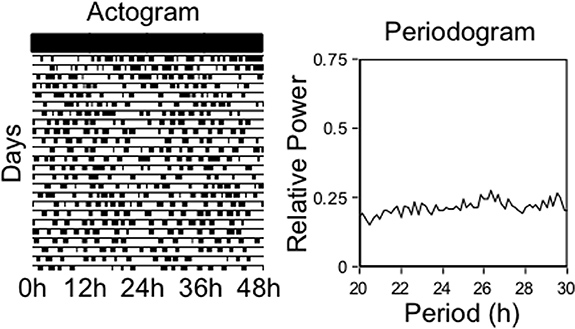 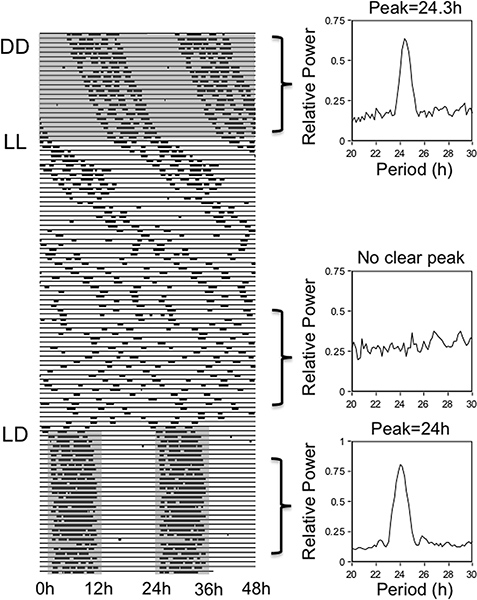 Figure 5. Lighting conditions have strong effects on the patterns of running wheel activity. In this record, the rat is initially housed under constant darkness (DD), as denoted by the shaded portion of the record. Under this condition, the circadian clock drives a circadian rhythm in running-wheel activity with a period of 24.33 hr, shown by the periodogram (top right). Next, the rat is housed under constant light (LL), as denoted by the white portion of the actogram. Under this condition the endogenous circadian clock is disrupted gradually over 2-3 weeks, and as shown by the periodogram (middle right) the rat becomes arrhythmic. Finally, the normal 12 hr:12 hr LD cycle was reinstated and the running-wheel activity rhythm was restored with a precise 24 hr rhythm as shown by the periodogram (bottom right).

Monitoring daily activity rhythms using running wheels is the most commonly used and reliable method for assessing the output of the master circadian clock in nocturnal rodents. Wheel-running activity, however, is only one of many aspects of behavior and physiology that can be monitored continuously. Although the vast majority of running-wheel activity occurs during the night, over 30% of the total wakefulness occurs during the daytime25,26. Other endpoints can be used to assess circadian rhythms, including general activity, food-bin approaches, drinking, sleep, and body temperature. Thus, depending on the nature of the study, researchers may record several rhythms simultaneously.

The authors would like to acknowledge salary awards, equipment grants, and operating funds from the Fonds de la recherche en santé Québec (FRSQ), Canadian Institutes of Health Research (CIHR), the Natural Sciences and Engineering Research Council of Canada (NSERC), and the Concordia University Research Chairs Program (CRUC), as well as the thoughtful feedback on this manuscript from Dr. Jane Stewart. 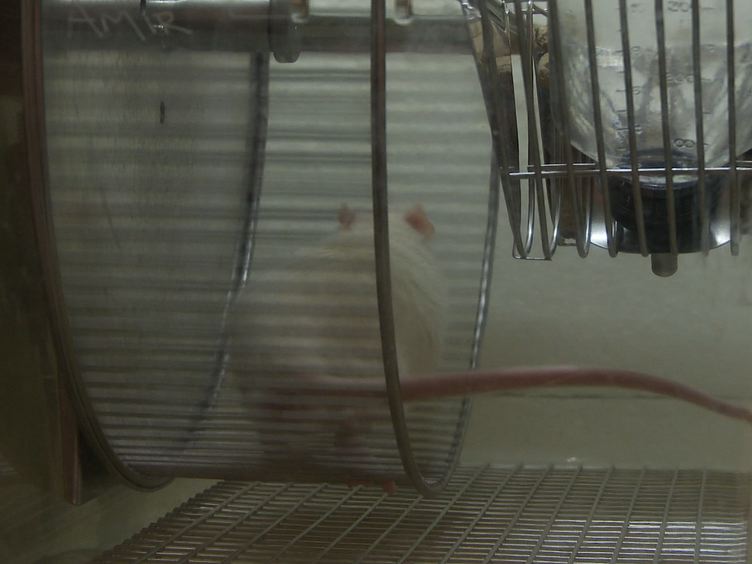