The causes of degeneration of midbrain dopaminergic neurons during Parkinson’s disease are not fully understood. Cellular culture systems provide an essential tool for study of the neurophysiological properties of these neurons. Here we present an optimized protocol, which can be utilized for in vitro modeling of neurodegeneration.

Degeneration of mesencephalic dopaminergic (mesDA) neurons is the pathological hallmark of Parkinson’s diseae. Study of the biological processes involved in physiological functions and vulnerability and death of these neurons is imparative to understanding the underlying causes and unraveling the cure for this common neurodegenerative disorder. Primary cultures of mesDA neurons provide a tool for investigation of the molecular, biochemical and electrophysiological properties, in order to understand the development, long-term survival and degeneration of these neurons during the course of disease. Here we present a detailed method for the isolation, culturing and maintenance of midbrain dopaminergic neurons from E12.5 mouse (or E14.5 rat) embryos. Optimized cell culture conditions in this protocol result in presence of axonal and dendritic projections, synaptic connections and other neuronal morphological properties, which make the cultures suitable for study of the physiological, cell biological and molecular characteristics of this neuronal population.

Loss of dopaminergic neurons from the substantia nigra pars compacta leads to the cardinal motor symptoms of Parkinson’s Disease (PD), the second most prevalent neurodegenerative disorder. The underlying cause of the demise of this mesencephalic neuronal population is not known. To study the biochemical pathways responsible for the development and modulating neurophysiological properties and survival of mesDA neurons, several cell culture and animal model systems have been used. Immortalized cell lines, including the rat dopaminergic cell line 1RB3AN27(N27), the human dopaminergic neuroblastoma cell line SH-SY5Y, the mouse dopaminergic hybrid cell line MN9D and human mesencephalic LUHMES cells have been used for biochemical and limited mechanistic studies 1-5. For the study of the specific loss of mesDA neurons, several neurotoxin-based and genetic models have been developed 6-8. Primary ventral midbrain cultures, provide an indispensable tool for studying the neuronal and synaptic properties of the dopaminergic neurons and the pathways involved in pathogenesis of this common disorder.

Here we present a detailed protocol for the isolation of mesencephalic dopaminergic neurons, which contains modifications resulting in higher survivability and increased yield of coverslips per embryo. Use of pre-mature E12.5 mouse mesencephalon (E14.5 in rat) enhances survivability. At this age neurons have not developed axons yet, which leaves cells intact during dissection and minimizes the stress thereby significantly increasing viability. In addition, careful dissection of the ventral midbrain, as described in section 2 of this protocol, further enhances survivability. To increase the numbers of coverslips per embryo, an alternative plating method is presented in section 4 of this protocol. This leads to a yield of up to 10 coverslips per embryo as compared to 4 coverslips under standard plating conditions thus reducing the amount of animals per experiment.

Neurons in culture exhibit outgrowth of axons and dentrites, form synaptic connections and reveal the presence of neuronal and synaptic markers making these cultures suitable for live cell imaging, immunocytochemical and electrophysiological studies. Furthermore, the use of neuronal cultures facilitates genetic and pharmacologic manipulation. Outgrowth of neurites from day 2 in vitro allows for developmental studies. Furthermore, the long-term survival of cultures (up to six weeks) makes them suitable for study of the slow, progressive degeneration of these neurons.

NOTE: The animals were maintained and handled in compliance with the institutional guidelines and all animal procedures were approved by the Imperial College's Animal Welfare and Ethical Review Body (AWERB) and the Home Office and Harvard University Institutional Animal Care and Use Committee (IACUC), in compliance with federal and state regulations.

Immunohistochemistry against Tyrosine hydroxylase (Th) shows that between 0.5-1% of the cells in culture are dopaminergic. Neuronal projections appear within 2 hr after plating and by the first day, axons and dendrites are distinguishable (Figure 2), using Tyrosine Hydroxylase (TH) and Microtubule-Associated Protein 2 (Map2) antibodies (Figure 3). The neurons survive for more than six weeks and show extensive outgrowth. The neuron-glia ratio in the cultures is directly related to the concentration of serum in the medium, as shown previously. While eliminating FBS from the cultures may yield relatively pure neuronal cultures, we and others have found that addition of serum increases survivability of dopaminergic neurons in culture 9.

Figure 1. Procedure for isolation of embryonic ventral midbrain. The schematic view of E12.5 mouse brain, midbrain boundaries (dashed lines), and the approximate position of the region of interest, ventral midbrain, within the red rectangle (A) and the tools for dissection of the ventral midbrain, a bioscissor, foreceps, and a blade holder (B) are shown. The embryos are taken out from amniotic sac by rupturing it (C). The region of interest, ventral midbrain, is shown by the rectangle (D). Midbrain is isolated by cutting at the isthmus (left of the cut piece) and the midbrain-forebrain boundary (right; E). The mediodorsal part of the midbrain is cut (F) and it is flattened, to resemble a butterfly shape (G,H). Then, meninges are dissociated from brain (H) and ventral midbrain (rectangle) is isolated from the dorsal part by cutting off half of the wings, using a shaving blade (I). Ventral midbrain (J) is transferred to a 15 ml conical tube and kept on ice, until dissociation. Please click here to view a larger version of this figure.

Figure 3. Long term survival, outgrowth of processes and synaptogenesis in two week old ventral midbrain cultures. Midbrain dopaminergic neurons, identified by tyrosine hydroxylase antibody grow extensive axons and dendrites, identified by Map2 antibody, in the ventral midbrain cultures two weeks after dissociation from E12.5 embryos. Dendrites can be distinguished by overlap of Th and Map2-positive processes, where only Th-positive fibers represent axons. Antibodies were used at a dilution of 1:200. Scale bar: 20 µm. Please click here to view a larger version of this figure.

Dopaminergic neurons in midbrain are the main source of dopamine in the central nervous system. They are divided into three groups, substantia nigra pars compacta (SNpc), ventral tegmental area (VTA) and retrorubral field (RRF) 10,11. The neurons in SNpc and VTA give rise to major dopaminergic pathways, mesocortical, mesolimbic and nigro-striatal, involved in functions such as control of emotion, motivation and motor behavior. Demise of the neurons in SNpc and functional disruption of the nigrostriatal system is the main pathological characteristic of the second most prominent neurodegenerative disorder, Parkinson’s disease (PD) 12,13. Current therapeutic approaches address symptoms of the disease and do not halt or slow down degeneration and the causes of the slow, progressive cell loss are still unknown 14-16. Therefore, development of in vivo and in vitro techniques for study of the developmental, biochemical, and physiological characteristics of this neuronal population is imperative to understanding the etiology of PD and to development of new therapeutic approaches.

Here we describe an optimized method for dissection, dissociation and culturing of primary neurons from embryonic mouse and rat ventral midbrain, which results in long-term in vitro survival of the dopaminergic neurons from this region, allowing study of the processes such as differentiation, axonal outgrowth and synapse formation. Several advantages of this protocol include the increased number of coverslips per embryo, independence from growth factors and the length of in vitro survival, maximizing development of neurons 4. This method may complement the in vivo studies in allowing for understanding the mechanisms underlying normal physiological functions of the midbrain dopaminergic neurons as well as progressive degeneration of this neuronal population in cytotoxic and genetic models of Parkinson’s disease.

One of the main disadvantages of this protocol is the lack of distinction between SNpc and VTA dopaminergic neurons. This problem exists because at the time of culturing (E12.5 in mice or E14.5 in rats) terminal differentiation of the neurons and their regionalization is not complete and while the use of older embryos is possible, it significantly reduces the survival of the neurons due to axotomy. Distinguishing the two populations would be possible by immunocytochemistry, using antibodies against specific markers for each population such as Girk2 (to identify SNpc neurons) and Calbindin (to identify VTA neurons)17.

The optimized plating described in section 4 decreases the amount of embryos per experiment by more than 50% and therefore contributes to reducing the use of animals in research. The most critical steps for survivability of the cultures are the time between euthanization of the dams and complete dissection of the embryonic midbrains (step 2.1 – 2.8), as well as the complete removal of the meninges (step 2.6, Figure 1H).

This work was performed using the Division of Brain Sciences, Department of Medicine, Imperial College London startup funds to K.N.A. 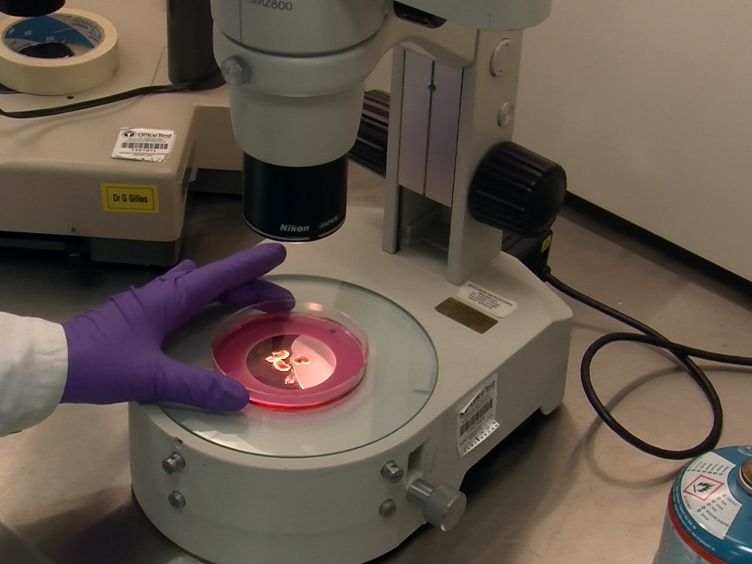