This protocol describes the feasibility to perform miRNA profiling in exosomes, released in plasma of NSCLC patients, through a commercial exosome isolation kit with Proteinase K and RNAse treatments, in order to avoid circulating miRNAs contamination and evaluate their biomarker features in NSCLC.

The discovery of alterations in the EGFR and ALK genes, amongst others, in NSCLC has driven the development of targeted-drug therapy using selective tyrosine kinase inhibitors (TKIs). To optimize the use of these TKIs, the discovery of new biomarkers for early detection and disease progression is mandatory. These plasma-isolated exosomes can be used as a non-invasive and repeatable way for the detection and follow-up of these biomarkers. One ml of plasma from 12 NSCLC patients, with different mutations and treatments (and 6 healthy donors as controls), were used as exosome sources. After RNAse treatment, in order to degrade circulating miRNAs, the exosomes were isolated with a commercial kit and resuspended in specific buffers for further analysis. The exosomes were characterized by western blotting for ALIX and TSG101 and by transmission electron microscopy (TEM) analysis, the standard techniques to obtain biochemical and dimensional data of these nanovesicles. Total RNA extraction was performed with a high yield commercial kit. Due to the limited miRNA-content in exosomes, we decided to perform retro-transcription PCR using an individual assay for each selected miRNA. A panel of miRNAs (30b, 30c, 103, 122, 195, 203, 221, 222), all correlated with NSCLC disease, were analyzed taking advantage of the remarkable sensitivity and specificity of Real-Time PCR analysis; mir-1228-3p was used as endogenous control and data were processed according to the formula 2-ΔΔct 13. Control values were used as baseline and results are shown in logarithmic scale.

The low survival rate in NSCLC (non-small cell lung cancer) patients is mainly due to the limited efficacy of treatments in advanced disease and poor early detection1. Activating mutations in the EGFR gene, that have been discovered in a subpopulation of NSCLC patients, are known to confer sensitivity to tyrosine kinase inhibitors (TKIs). Unfortunately, the majority of EGFR mutated NSCLC patients develop TKI resistance2. Especially in this context, a correct diagnosis is mandatory. In general, due to localization of tumors, obtaining biopsy tissue in NSCLC isn't always feasible. Therefore, several studies are ongoing that use non-invasive methods to obtain these biological data. Exosomes are described as liquid biopsy components that could be investigated in order to obtain diagnostic and prognostic values with non-invasive techniques3.

Exosomes are nanovesicles (40 - 100 nm diameter) of endocytic origin that are released by different cell types both in physiological and pathological conditions4. They can carry protein, lipids, mRNA and microRNAs. Moreover, several studies suggest a pleiotropic role of tumor derived exosomes, which can influence growth and survival of tumor cells, angiogenesis, stromal and extracellular matrix remodeling and drug resistance5.

MicroRNAs (miRNAs) are short non-coding RNA that are involved in post-transcriptional regulation, binding the 3′-UTR of the target mRNAs and leading the mRNA to degradation or to a non-translation6. Selective sorting of miRNAs into exosomes has been described. In this context, recently was demonstrated, in vitro and in vivo, a selective packaging of miR-21 (a well-known miRNA with oncogenic effects) in exosomes released by chronic myelogenous leukemia cell lines after curcumin treatment7.

The exosomal miRNA profile is similar to the miRNA profile of the primary tumor and this feature may be exploited in early diagnosis and prognosis3. Specifically, there is a possibility to characterize, by real-time PCR, selected miRNAs correlated with the molecular profile of disease, e.g., EGFR mutations among others8.

Here, the analysis of a selected panel of NSCLC-correlated miRNAs8-9is described that were isolated from exosomes released in the blood of NSCLC patients. After obtaining the inform consent report from the patients, plasma of 12 NSCLC patients and 6 healthy controls, were analyzed. The exosome isolation was performed with commercial kit according to the manufacturer's protocol. Before exosome isolation, plasma samples were treated with RNAse, in order to degrade contaminant circulating miRNAs. We decided to perform this analysis with a commercial kit due to the limited standardization of other techniques (e.g., ultracentrifugation) which is especially important when working with clinical samples. This kit includes a Proteinase K treatment, which will degrade the RNAse, and thus decreases the risk to degrade exosomal miRNAs after exosome lysis. MicroRNA analysis was performed by sensitive and specific Real-Time PCR analysis; mir-1228-3p was used as an endogenous control and data were normalized according to the formula 2-ΔΔct. Control values are used as baseline and results are shown in a logarithmic scale.

Note: The isolation of exosomes from plasma samples, was performed with a commercial kit, according to manufacturer's protocol and by adding RNAse treatment: (all these steps must be performed with personal and environment protective equipments and following specific legal procedure for manipulation of biological samples).

Note: In order to characterize the isolated nanovesicles, western blotting with antibodies against ALIX and TSG101 (well-known exosomal markers) is recommended.

Note: Due to the described limited quantity of miRNAs content in exosomes, it was decided to perform the reverse transcription of selected miRNAs through a commercial kit using an individual assay for each miRNA, according to manufacturer's protocol. For each sample, 8 miRNAs correlated to NSCLC status were selected (miR-30b; miR-30c; miR-103; miR-122; miR-195; miR-203; miR-221; miR-222; and miR-1228-3p as endogenous control).

Note: This analysis was performed using a commercial kit for Real Time PCR (qPCR), with three biological and technical replicates per sample.

A total of 12 plasma of NSCLC patients and 6 healthy controls were processed with commercial kit for exosome isolation from plasma. Each sample was processed by Western Blot analysis in order to evaluate the exosomal markers ALIX (96 kDa) and TSG101 (43 kDa). An example of these results is shown for 3 samples in Figure 1, indicating that exosome isolation from plasma samples is feasible with this protocol.

In order to biophysically characterize exosomal samples, TEM analysis was performed. TEM have shown that the nanovesicles obtained by this isolation protocol have a size average in the range of exosomal size, between 40 - 100 nm (Figure 2).

After exosome isolation and characterization, we investigated their miRNAs content. We selected 8 specific miRNAs, known to be deregulated in NSCLC. As internal control, we used miR-1228 that has been previously validated as a stable and efficient endogenous control in different tumor types10. According to these results miR-1228 is a reliable and stable endogenous control. When the expression level of the 8 selected miRNA between healthy donors and lung cancer patients were compared, it was found that these miRNAs are strongly deregulated in the analyzed clinical samples. In Figure 3 the expression pattern of the 8 selected miRNAs is shown on a logarithmic scale for the 12 samples analyzed (PAD1-12). Not all miRNAs were detectable in every sample and due to the limited amount of samples we cannot perform statistical analysis.

Figure 1. Western Blot Analysis in 3 Exosomal Samples for ALIX and TSG101. The Western Blot shows the presence of the well-known exosomal markers, ALIX and TSG-101, in the analyzed samples. Please click here to view a larger version of this figure. 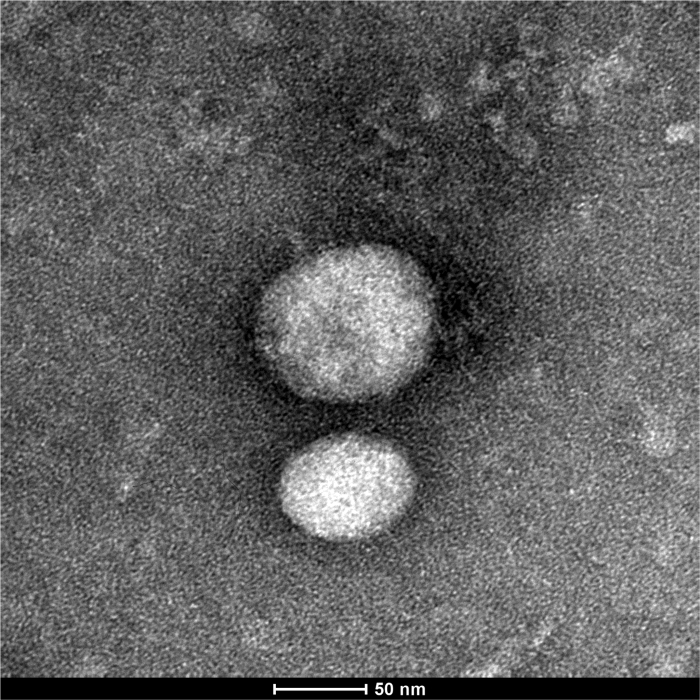 Figure 2. TEM Analysis of Exosomal Samples. These results demonstrate that the isolated nanovesicles have a diameter average, between 40 - 100 nm, inside the exosomal range. Please click here to view a larger version of this figure. 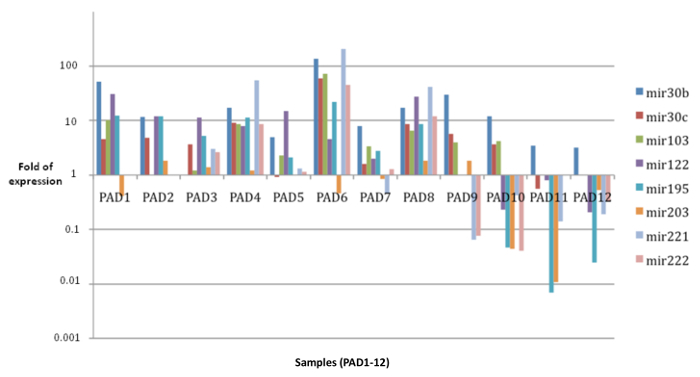 Figure 3. Expression Profile of 8 Selected miRNAs in Exosomal Samples. These data, shown in logarithmic scale, demonstrate that through this protocol is feasible to see up- or down-regulation of selected exosomal miRNAs from clinical NSCLC plasma patients (PAD1-12), leading to potential discovery of exosomal biomarkers of NSCLC. The data are shown as fold of expression relative to healthy controls. Please click here to view a larger version of this figure.

With this combined protocol it was possible to perform an exosomal miRNA analysis from plasma of NSCLC patients. These data may reflect the disease status, but this needs to be confirmed by further study.

The possibility to process clinical samples with RNase treatment has given us pure samples without contamination of circulating miRNAs. However, the presence of RNase enzymes in the samples could effect the amount of exosomal miRNA after exosome lysis. For this reason we chose a kit with Proteinase K treatment, in order to eliminate circulating contaminant proteins and to degrade RNase enzymes.

After the standardization of all isolation procedures, the future characterization and miRNA analysis of these data can form a useful tool to detect biomarkers in a non-invasive way during initial diagnosis and follow-up. 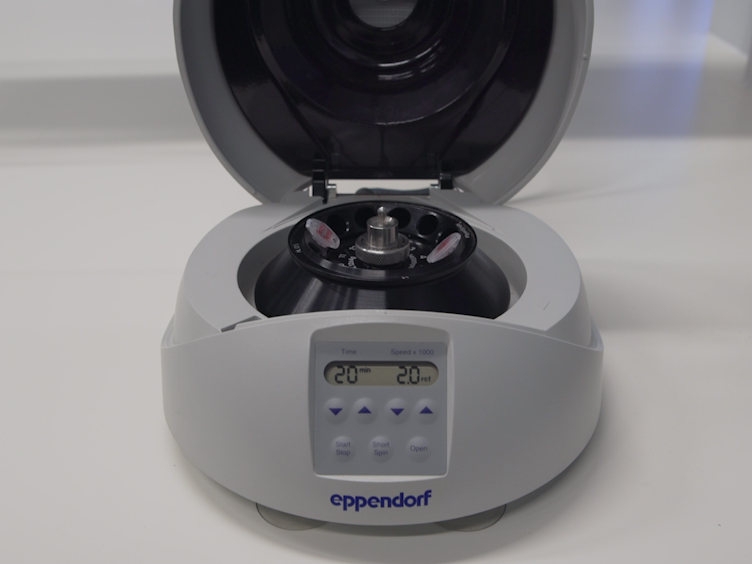