Induced pluripotent stem (iPS) cells are generated from mouse and human somatic cells by forced expression of defined transcription factors using different methods. Here, we produced iPS cells from mouse amniotic fluid cells, using a non-viral-based transposon system. All obtained iPS cell lines exhibited characteristics of pluripotent cells, including the ability to differentiate toward derivatives of all three germ layers in vitro and in vivo. This strategy opens up the possibility of using cells from diseased fetuses to develop new therapies for birth defects.

Prenatal diagnosis is an important clinical tool to evaluate genetic diseases (i.e. chromosomal aberrations, monogenetic or polygenetic/multifactorial diseases) and congenital malformations (i.e. congenital diaphragmatic hernia, cystic lung lesions, exomphalos, gastroschisis). Amniotic fluid (AF) cells are simple to obtain from routinely scheduled procedures during the second trimester of pregnancy (i.e. amniocentesis and amnioreduction) or caesarean sections1,2. The availability of AF cells from prenatal or neonatal patients provides the possibility of using this source for regenerative medicine, and several researchers investigated the possibility to treat different tissue damages or diseases using a stem cell population isolated from AF3,4,5,6,7,8,9,10,11,12. The possibility of easily obtaining AF cells from diseased patients, in a time window in which the disease is often stationary, opens the way to the idea of using this cell source for reprogramming purposes. Indeed, induced pluripotent stem (iPS) cells derived from AF cells could be differentiated in the cells of interest for in vitro drug testing or for tissue engineering approaches, in order to prepare an adequate patient-specific therapy before childbirth. Many studies have already demonstrated the ability of AF cells to be reprogrammed and differentiated into a wide range of cell types13,14,15,16,17,18,19,20,21,22,23,24,25,26,27.

Since the discovery by Takahashi and Yamanaka28 of reprogrammed somatic cells through the forced expression of four transcription factors (Oct4, Sox2, cMyc and Klf4), progress has been made in the field of reprogramming. Considering the different methods, we can distinguish between viral and non-viral approaches. The first expects the usage of viral vectors (retroviruses and lentiviruses), which have high efficiency but usually incomplete silencing of the retroviral transgene, with both the consequence of a partially reprogrammed cell line and the risk of insertional mutagenesis29,30,31. The non-viral method uses different strategies: i.e. plasmids, vectors, mRNA, protein, transposons. The derivation of iPS cells free of transgenic sequences aims to circumvent the potentially harmful effects of leaky transgene expression and insertional mutagenesis. Among all the above mentioned non-viral strategies, the PiggyBac (PB) transposon/transposase system requires only the inverted terminal repeats flanking a transgene and transient expression of the transposase enzyme to catalyse insertion or excision events32. The advantage in using transposons over other methods for iPS cell generation is the possibility of obtaining vector-free iPS cells with a non-viral vector approach that shows the same efficiency of retroviral vectors. This is possible by trace-less excision of the integrated transposon encoding for the reprogramming factors following a new transient expression of the transposase in the iPS cells33. Given that PB is efficient in different cell types34,35,36,37, is more suitable for a clinical approach with respect to viral vectors, and allows for the production of xeno-free iPS cells contrary to current viral production protocols that use xenobiotic conditions, this system is used to obtain iPS cells from murine AF.

All procedures were in accordance with Italian law. Murine AF samples were harvested from pregnant mice at 13.5 days post coitum (d.p.c.) from C57BL/6-Tg(UBC-GFP)30Scha/J mice called GFP.

NOTE: Mouse AF cells were transfected with the PB-tetO2-IRES-OKMS transposon plasmid, in conjunction with a transposase expression plasmid (mPBase) and with the reverse tetracycline transactivator (PB-CAG-rtTA) transposon plasmid. All plasmids were provided by Professor Andras Nagy33.

To evaluate the capacity of reprogramming, mouse AF cells were collected from fetuses of GFP mice. Cells were transfected with the circular transposon plasmid PB-tetO2-IRES-OKMS, which expresses the Yamanaka factors (Oct4, Sox2, cMyc and Klf4) linked to the mCherry fluorescent protein in a doxycycline-inducible manner, and reverse tetracycline transactivator (PB-CAG-rtTA) plasmids together with the transposase expression plasmid (mPBase). Mouse AF cells were transfected with Oct4, Klf4, cMyc and Sox2 after 1 week of in vitro expansion over a MEF feeder layer. For the expression of the exogenous factors, doxycycline was added the day after the transfection at a concentration of 1.5 µg/mL, as previously described39. The expression of the mCherry was visible after 24 h from the doxycycline addition, indicating transfection. The first colonies with an ES-like morphology appeared 20 days after doxycycline induction and were picked 30 days post-transfection. These colonies were seeded on inactivated fibroblast feeder layers. After picking, surviving clones were maintained in medium supplemented with doxycycline for some passages until found to be doxycycline independent in replicated wells33.

Mouse iPS-AF clones were evaluated for different parameters: mCherry expression, alkaline phosphatase staining, protein expression of the pluripotency markers Oct4, Sox2, Klf4, Nanog and SSEA1, expression of exogenous and endogenous pluripotency genes (Oct4, Klf4, cMyc and Sox2), in vitro (EBs) and in vivo (teratoma assay) differentiation. They fulfilled all the criteria evaluated to validate their pluripotency, as summarized in the Figure 1. 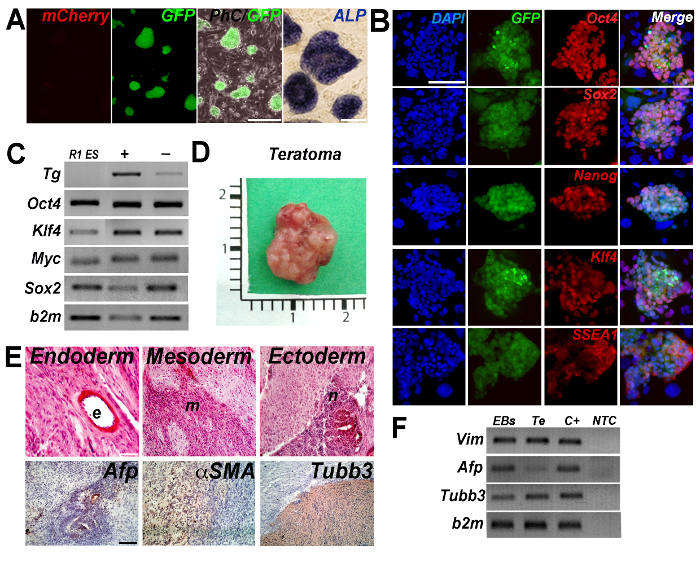 The method chosen to obtain the induction of pluripotency is relevant for cell clinical safety with respect to long term transplantation. Nowadays, there are several methods suitable for the reprogramming. Among the non-integrative methods, the Sendai viral (SeV) vector is an RNA virus that can produce large amounts of protein without integrating into the nucleus of the infected cells40 and could be a strategy to obtain iPS cells. SeV vectors could be an attractive candidate for the generation of translational-grade iPS cells, but it presents some shortcomings. The viral replicase is sensitive to the nature of the transgenic sequences. Since SeV vectors constitutively replicate, they can be difficult to eliminate from the host cells, even if different strategies are used to improve this aspect41,42. It requires special handling, such as a Level 2 biological safety cabinet. There is only one commercial vendor available. There is a current lack of clinical-grade SeV for reprogramming and there are high costs of iPS cell production.

Due to these aspects, the transposon system can be considered a better approach with respect to SeV vectors, and here we establish that this system is a suitable method for reprogramming mouse AF cells with various advantages. It allows the production of xenofree iPS cells contrary to current viral production protocols that use xenobiotic conditions. It has no apparent species barrier and has a transgene cargo capacity bigger than viruses. It allows simple and safe delivery of plasmid transposons through the use of standard cell transfection method, which can be easily performed in every laboratory equipped with a Level 1 biological safety cabinet. Transposase re-expression permits the removal of PB elements with consequent generation of footprint-free mouse and human iPS cells, as demonstrated in various cell lines 32,34,35. Different studies showed that the transposon systems display a lower frequency in targeting near cancer related genes and less bias in targeting active genes compared to viral-based vectors43,44,45,46,47. Reprogramming based on transposons depends on the chosen delivery method, and this is a limitation due to the resistance or toxicity related to DNA transfection methods (lipofection, electroporation or nucleofection). Here we used a non-liposomal formulation designed to transfect DNA which worked well with mouse AF cells. If other cells are employed, tests will be necessary to use the best delivery method in terms of high efficiency and low toxicity. Summarily, the PB transposon method is considered to be safe and low cost but with a lower efficiency compared with SeV vectors.

Regarding the procedure to obtain mouse AF cells, it is critical to have pregnant female mice available. As such, it is necessary to set up an adequate number of matings (at least six females with two females per male).

More experiments could be performed specifically on human AF cells to produce iPS cells from healthy and diseased fetuses. Considering the wide range of congenital diseases that can be detected through the prenatal diagnosis, cells obtained from the AF during gestation represent the best source to derive iPS cells for both studying the disease48 and also for planning a regenerative medicine approach in case of tissue defects such as cardiac or skeletal muscle49,50. 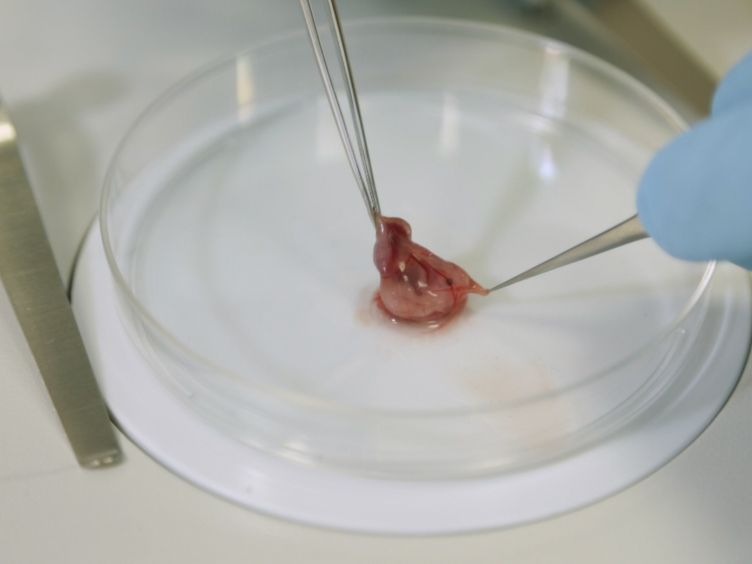