We present protocols for the collection, preparation, and imaging of mature Drosophila oocytes. These methods allow the visualization of chromosome behavior and spindle assembly and function during meiosis.

Chromosome segregation in human oocytes is error prone, resulting in aneuploidy, which is the leading genetic cause of miscarriage and birth defects. The study of chromosome behavior in oocytes from model organisms holds much promise to uncover the molecular basis of the susceptibility of human oocytes to aneuploidy. Drosophila melanogaster is amenable to genetic manipulation, with over 100 years of research, community, and technique development. Visualizing chromosome behavior and spindle assembly in Drosophila oocytes has particular challenges, however, due primarily to the presence of membranes surrounding the oocyte that are impenetrable to antibodies. We describe here protocols for the collection, preparation, and imaging of meiosis I spindle assembly and chromosome behavior in Drosophila oocytes, which allow the molecular dissection of chromosome segregation in this important model organism.

The study of meiosis is sometimes described as the "genetics of genetics". This is because the fundamental properties of chromosome inheritance and independent assortment are carried out through the segregation of chromosomes during gamete production. An important demonstration of the chromosome theory of inheritance came in 1916 from the work of Calvin Bridges in Drosophila melanogaster1. This and other classical genetics studies in Drosophila contributed greatly to our understanding of genetics. Cytological examination of meiotic chromosomes in Drosophila oocytes, however, has been challenging. This is primarily because immunofluorescence of late-stage Drosophila oocytes, when the spindle assembles and chromosomes are oriented for segregation, is hampered by the presence of membranes that render the oocyte impenetrable to antibodies.

Despite this challenge, Drosophila oocytes remain an attractive model for the study of chromosome behavior and spindle assembly. This is because of the powerful genetic tools available in Drosophila, but also because the oocytes arrest at metaphase I, when the chromosomes are oriented and the spindle is fully formed. This facilitates the collection and examination of large numbers of oocytes at this important stage of cell division. In addition, a simple model organism that is amenable to genetic manipulation for the study of oocyte chromosome segregation can provide an important contribution to our understanding of human reproductive health. Errors in chromosome number are the leading genetic cause of miscarriage and birth defects in humans2. A majority of these errors can be traced to the oocyte and are correlated with increasing maternal age. The average age of mothers in the U.S. has been increasing, making this a major public health concern.

We describe here methods for the cytological examination of Drosophila oocytes, including a demonstration of how to remove the oocyte membranes. These methods are modifications of protocols first described by Theurkauf and Hawley3, Zou et al.4, and Dernburg et al.5. We also include methods for the enrichment of different stages of oocytes, based on a protocol first described by Gilliland et al.6. Finally, we add instructions for the drug treatment of Drosophila oocytes. Together, these methods allow the cytological investigation of oocyte chromosome segregation and spindle assembly in Drosophila.

The methods we have described here will result in the collection of late-stage Drosophila oocytes representing three stages of meiosis (Figure 1). Oocytes in prophase are distinguished by the presence of the nuclear envelope, which is visible by the lack of tubulin signal in the region surrounding the karyosome (Figure 1A). Prometaphase is the period after nuclear envelope breakdown during which the spindle assembles. During prometaphase, the karyosome assumes a distinctive shape, becoming elongated often with the 4th chromosomes apart from the main karyosome mass (Figure 1B). Prometaphase concludes with metaphase, at which Drosophila oocytes naturally arrest until ovulation. In metaphase oocytes, the karyosome has retracted into a round shape (Figure 1C).

Figure 3 shows representative images from the two Protocols described here. Antibodies against α-tubulin (to show the spindle), CENP-C (to show centromeres), and INCENP (to show the central spindle) were used on oocytes fixed with formaldehyde/heptane (Figure 3A). Probes for the repetitive centromeric sequences on the 2nd chromosome (AACAC) and 3rd chromosome (dodeca) were used on oocytes fixed with formaldehyde/cacodylate and co-stained with an α-tubulin antibody according to the FISH protocol (Figure 3B). The AACAC probe appears as several clustered foci while the dodeca probe appears as a single focus per chromosome. Oocytes treated with 150 µM colchicine for 10 min were fixed with formaldehyde/heptane (Figure 3C). This treatment eliminates most non-kinetochore-microtubules, which results in all microtubules contacting the DNA at centromere-labeled foci. Oocytes treated with 10 µM paclitaxel for 10 min show excessive microtubules in the cytoplasm, but little effect on the spindle microtubules (Figure 3D). Oocytes treated with 25 µM Binucleine 2 for 20 min to inhibit Aurora B kinase show complete loss of spindle microtubules (Figure 3E).

Figure 1: Three stages of mature Drosophila oocytes: Prophase, Prometaphase, and Metaphase. Confocal images of Drosophila oocytes in prophase (A), prometaphase (B), and metaphase (C) of meiosis I. DNA is shown in blue and tubulin is shown in green in merged images. Insets in (B) and (C) show DNA in white. Scale bars = 10 µm. Please click here to view a larger version of this figure. 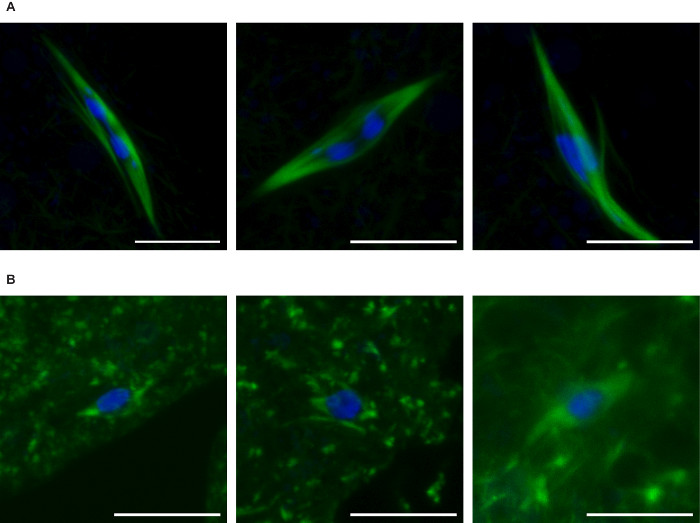 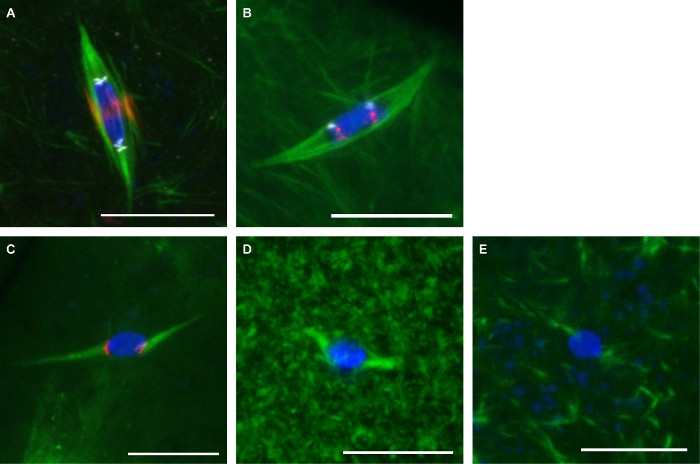 Figure 3: Antibody staining, FISH, and drug treatments of Drosophila oocytes. Confocal images of Drosophila oocytes with DNA in blue and tubulin in green. Scale bars = 10 µm. (A) Immunofluorescence in formaldehyde/heptane fixation with INCENP (central spindle) in red and CENP-C (centromeres) in white. (B) FISH in formaldehyde/cacodylate fixation with AACAC shown in red and dodeca shown in white. (C) Treatment with 150 µM colchicine for 10 min with CENP-C shown in red. Treatment with 10 µM paclitaxel for 10 min (D) or 25 µM Binucleine 2 for 20 min (E). Please click here to view a larger version of this figure.

Although an elongated karyosome is often seen in prometaphase oocytes, using karyosome shape to distinguish prometaphase from metaphase oocytes can be problematic. During prometaphase, the karyosome begins as a round shape, elongates, and then retracts to a round shape as the oocyte approaches the metaphase arrest. This means that many prometaphase oocytes do not have an elongated karyosome. In addition, if mutant or drug-treated oocytes are examined, karyosome shape may be affected, precluding using this method to stage oocytes. Because other markers to distinguish these stages are not currently available, we use the method described above to manipulate the speed of egg-laying of Drosophila females to enrich for oocytes either in prometaphase or metaphase. The rationale is that if oocytes spend a specific amount of time in prometaphase, and an indefinite amount of time arrested in metaphase, which lasts until egg-laying, then more rapid egg-laying will skew towards a higher percentage of prometaphase oocytes, while slower egg-laying will enrich for metaphase. The amount of effort required to collect virgin females or collect females over a shorter time frame than 2 days, as described by Gilliland et al.6, is not rewarded by an appreciable increase in prometaphase oocytes. It is also impossible to use the dorsal appendages to stage oocytes prepared with this protocol as dorsal appendages are removed along with the membranes. Although it is not possible to stage individual oocytes with 100% certainty using this method, the data from prometaphase-enriched or metaphase-enriched collections can be taken together to draw conclusions about these different stages9.

Drosophila oocytes are not fertilized until they pass through the oviduct; therefore, because the oocytes collected for the protocols described here examine oocytes taken before egg-laying, these oocytes have not been fertilized. Passage through the oviduct also causes the oocyte to activate and resume cell cycle progression. Methods to examine cell cycle stages after metaphase I exist11,12, but are outside the scope of this protocol.

The protocols described here focus on fixed imaging, in order to demonstrate effective methods for rendering mature Drosophila oocytes amenable to antibody penetration, namely through the removal of the oocyte membranes. Alternative methods for membrane removal (using forceps14 or sonication13) are possible; however, we find "rolling" to be the most efficient and reliable method. Techniques for live imaging have also been described elsewhere14-16 and are outside the scope of this protocol.

FISH in Drosophila oocytes was originally described by Dernburg et al.5. This protocol was designed to provide optimal conditions for probe hybridization to the condensed oocyte chromosomes, but the original protocol was not optimal for immunofluorescence. The method described above includes adaptations we have made to enhance antibody staining of α-tubulin, which is primarily what we use when performing FISH. For other antibodies, lowering the temperature of the denaturation step (Step 7.5) from 80 °C may be necessary.

The probes listed here are for the repetitive sequences in the heterochromatin near the centromeres. Because these sequences are highly repetitive, the probes anneal to multiple places and the collective signals are quite strong. We have had little success with probes for sequences in the euchromatin, possibly because of the unique structure of the chromosomes while contained in the condensed karyosome.

Mature Drosophila oocytes, like the oocytes of most organisms, are large, single cells. That means that there is a large volume of cytoplasm that contains a single nucleus. Fortunately, this nucleus, also known as a karyosome in Drosophila, can be readily identified as it is typically located just underneath the dorsal appendages close to the cortex. The dorsal appendages are removed along with the oocyte membranes, but the karyosome can still be located by finding the small divot in the oocyte cortex where the appendages once were. The best images are obtained from oocytes that have been mounted with this divot facing the coverslip since this places the karyosome closest to the objective. Although it may be possible to arrange the oocytes in this orientation prior to mounting, we prefer to mount many oocytes randomly and then search the slide for those in the preferred orientation.

In the future it will be important to identify markers that reliably distinguish prometaphase I and metaphase I spindles. Being able to more reliably stage the oocytes will reduce the reliance on more labor intensive alternatives, such as imaging large numbers of stage-enriched oocytes or live imaging, which also has its staging problems. This method is a basic method which can be used to take advantage of advances in Drosophila genetics as new tools become available to modify or knock out gene products. This includes methods to directly target protein activity with new drugs or targeted degradation strategies. In addition, these methods are not limited to imaging meiotic spindles. Any structure within the oocyte, such as the actin cytoskeleton, could be analyzed using these methods.

We thank Christian Lehner for providing the CENP-C antibody and Eric Joyce for recommendations on FISH. Work in the McKim lab was funded by a grant from NIH (GM101955). 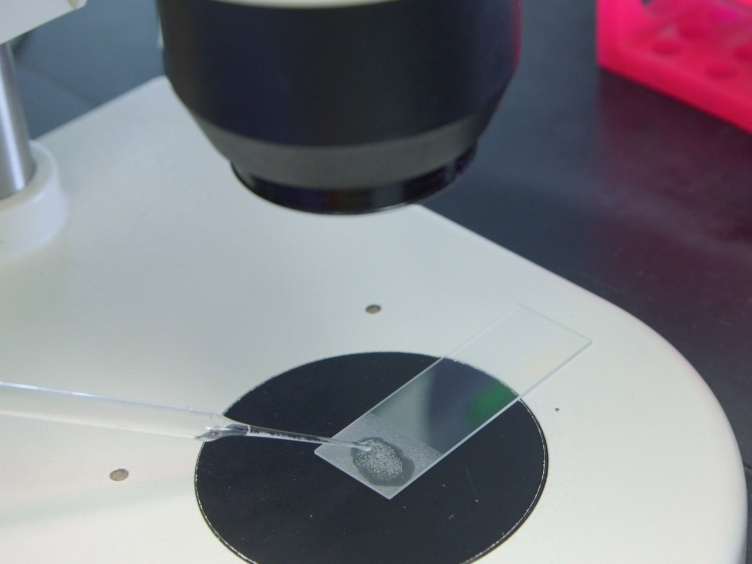