Invasive cancers, major injuries, and infection can cause bone defects that are too large to be reconstructed with preexisting bone from the patient's own body. The ability to grow bone de novo using a patient's own cells would allow bony defects to be filled with adequate tissue without the morbidity of harvesting native bone. There is interest in the use of adipose-derived stromal cells (ASCs) as a source for tissue engineering because these are obtained from an abundant source: the patient's own adipose tissue. However, ASCs are a heterogeneous population and some subpopulations may be more effective in this application than others. Isolation of the most osteogenic population of ASCs could improve the efficiency and effectiveness of a bone engineering process. In this protocol, ASCs are obtained from subcutaneous fat tissue from a human donor. The subpopulation of ASCs expressing the marker BMPR-IB is isolated using FACS. These cells are then applied to an in vivo calvarial defect healing assay and are found to have improved osteogenic regenerative potential compared with unsorted cells.

Major bone defects resulting from injury, infection, or invasive cancer have a significant impact on a patient's recovery and quality of life. Techniques exist to fill these defects with healthy bone from elsewhere in the patient's own body, but this transfer carries its own morbidity and risk of complications1,2,3. Furthermore, some defects are so large or complex that sufficient donor bone is not available to fill the defect. Prosthetic devices are a potential option for filling bony defects but these are associated with several disadvantages including infection risk, hardware failure, and foreign body reaction4.

For these reasons there is great interest in the possibility of engineering biological bone substitutes using a patient's own cells5. Adipose-derived stromal cells (ASCs) have potential for this application because they are abundantly available in the patient's own fat tissue and they have demonstrated the ability to heal bone defects by generating new bone tissue6,7. ASCs are a diverse population of cells and several studies have shown that selecting for specific cell surface markers can produce cell populations with enhanced osteogenic activity8,9. Selecting ASCs with the highest osteogenic potential would increase the likelihood that a scaffold seeded with these cells could regenerate a large bone defect.

Bone morphogenetic protein (BMP) signaling is critical for regulating bone differentiation and formation10 and the BMP Receptor type IB (BMPR-IB) is known to be important for osteogenesis in ASCs11. Recently, we have shown that expression of BMPR-IB can be used to select for ASCs with enhanced osteogenic activity12. Here we demonstrate a protocol for the isolation of BMPR-IB-expressing ASCs from human fat followed by an assay of their osteogenic activity using an in vivo calvarial defect model.

NOTE: Samples were obtained from patients who gave informed consent. All protocols were reviewed and approved by the appropriate Stanford University Institutional Review Board. While handling human tissue and cells, always adhere to Biosafety Level 2 (BSL2) precautions, as specified by your institution.

2. Harvesting and Isolation of ASCs

4. Creation of Calvarial Defects and Application of ACS-containing Scaffold

NOTE: Ensure that adequate institutional approvals are in place for the creation of calvarial defects in live mice. This protocol has been approved by the Stanford University Institutional Animal Care and Use Committee.

Micro CT scan done on the day of surgery will clearly show the skull defect. At this time there will be no ingrowth into the 4 mm defect. Subsequent scans are obtained over time to quantify the size of the defect over time compared with the baseline. Defects seeded with BMPR-IB+ cells should demonstrate more rapid closure of the defect when compared with BMPR-IB- and Unsorted cells (Figure 5). In addition, the portion of the skull containing the defect can be decalcified and processed for histology using standard methods 12. Sections stained with Movat's pentachrome stain will reveal greater bone regeneration in the defect treated with BMPR-IB cells compared with the other cell populations (Figure 6). 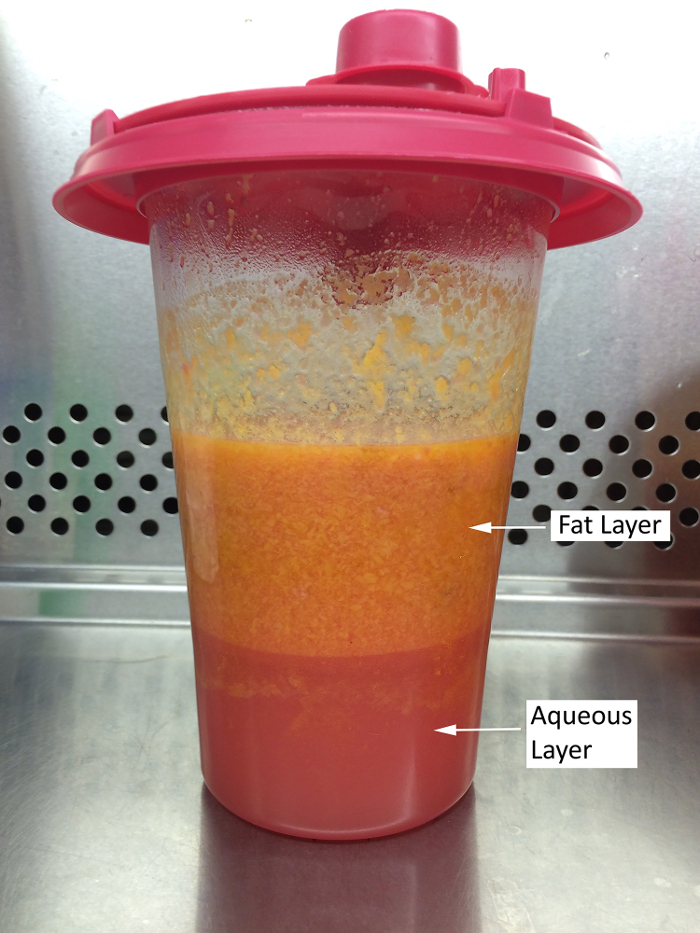 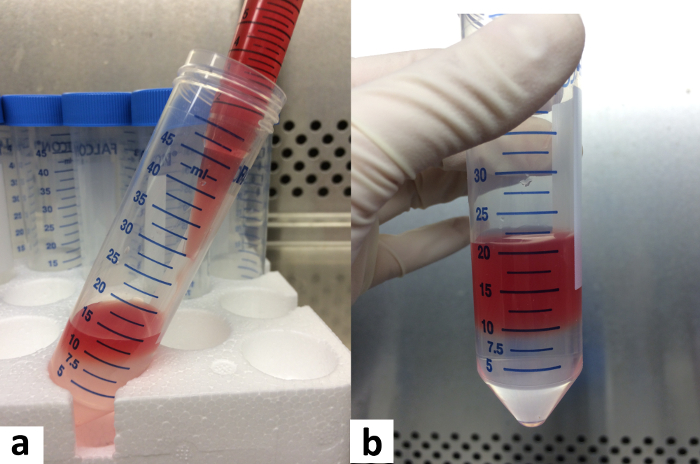 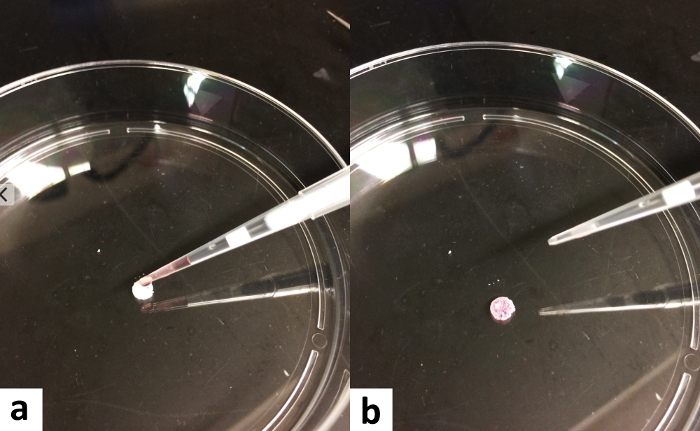 Figure 3: Seeding of Cells onto the Scaffold. (a) On the sterile surface of one well of a 24-well cell culture plate, load a dry scaffold with approximately 50 μL of cell suspension. (b) Incubate the scaffold in a cell culture incubator for 30 min to allow cell adhesion. Note: In the figure, a 10-cm plate is used for demonstration purposes. Please click here to view a larger version of this figure. 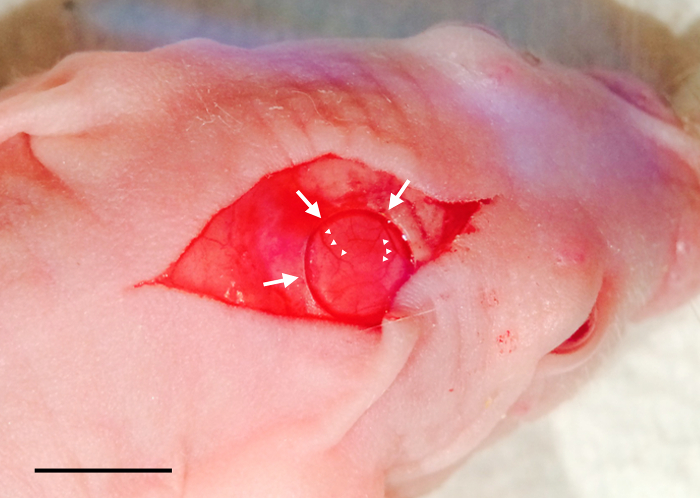 Figure 4: Creation of the Calvarial Defect. The calvarial defect (arrows) is visible within the open skin incision. Note the intact dural blood vessels (arrowheads), indicating that the drilling has not breached the dura. Scale bar, 5 mm. Please click here to view a larger version of this figure. 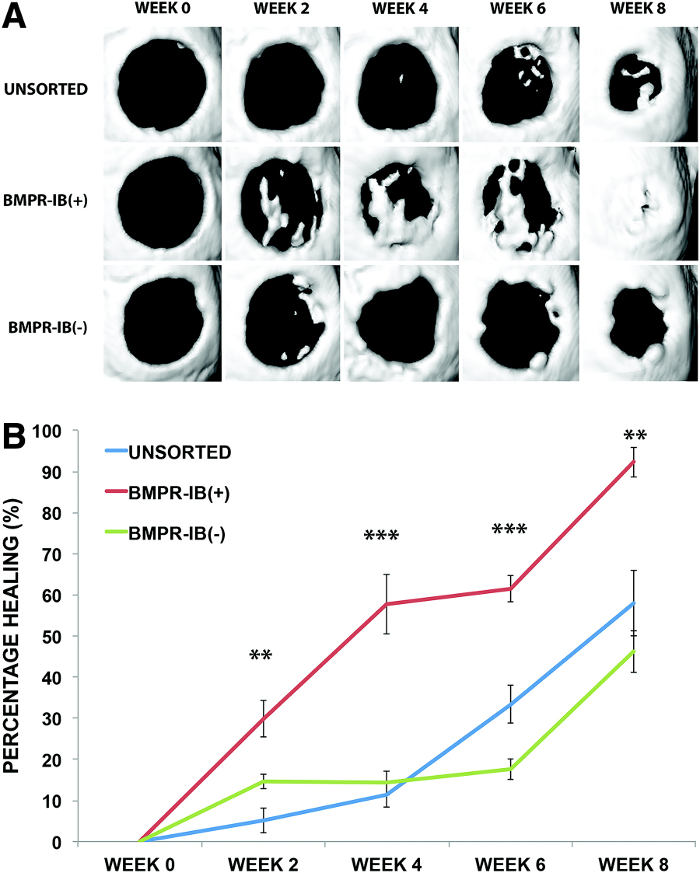 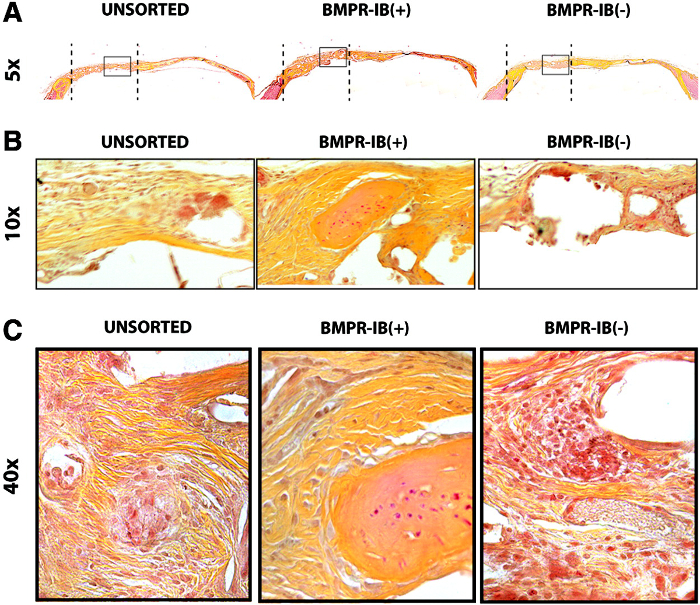 Critical Steps within the Protocol

During the harvest of ASCs, the critical step is adequate digestion of fat with collagenase. Inadequate digestion will result in a low yield of ASCs. During FACS sorting of BMPR-IB+ cells, it is important to carefully define the gate for positivity. Defining gates too loosely may result in sorted populations that are not pure. During creation of the calvarial defect, it is critical to drill the defect through the bone of the skull but to not advance into the dura mater. This will cause profuse bleeding and exposure of the brain, which will necessitate euthanasia of the animal.

Regarding anesthesia for the calvarial defect surgery, our lab prefers to use inhaled isoflurane, but another option is to intraperitoneally inject a mixture containing a final concentration of ketamine 10 mg/mL and xylazine 1 mg/mL in normal saline. The standard dose of this mixture is 300 µL for a 30 g mouse. This provides roughly 30 min of reliable anesthesia that does not require the mouse to be in the isoflurane nose cone during surgery. A disadvantage of using injected anesthetic is that it is not possible to decrease the dose after the injection has been given. In contrast, inhaled isoflurane can easily be titrated up or down in real time.

When adding cell suspension to the scaffold, researchers may find that the fluid volume is too small and will partially evaporate in the 30 min of incubation. Evaporation can cause cell death, which is a particularly harmful confounder in bone healing experiments. To combat this, load the scaffold inside a well of a 24 well plate. Fill the immediately surrounding wells with plain medium. This will create a humidified micro-environment which helps keep the loaded scaffold from drying out.

Histological staining of bone is predicated on correct and thorough decalcification of the calvarium prior to embedding and sectioning. It is accepted that skulls of differing ages require differing durations of decalcification, traditionally done in an EDTA solution

Limitations of the Technique

This protocol utilizes a 4 mm calvarial defect to assess the ability of a population of cells to enhance closure of the defect. This model may not simulate the healing that occurs in a more complex environment, such as a long bone fracture or a tumor resection. For this reason, alternate animal models may need to be used to understand the contribution of ASCs to bone healing in these settings.

Significance of the Technique with Respect to Existing/Alternative Methods

Using flow cytometry to isolate specific ASC populations is a promising technique for enhancing healing and regeneration in the context of multiple tissue and injury models, such as angiogenesis, adipogenesis, and osteogenesis. The utility of pro-osteogenic cells is explored in this study, showing a profound effect with cells positively selected for BMPR-IB in healing a calvarial defect.

Prior protocols for the isolation of ASC involve culturing the cells for several days on cell culture plates 16. However, cells may experience significant phenotypic drift while in culture. For this reason, we use an ASC isolation protocol that allows for rapid isolation of these cells, followed by further subpopulation purification using FACS. The entire procedure is accomplished in less than a day, minimizing the effects of cell surface marker or phenotypic drift.

We have shown that ASCs highly expressing BMPR-IB demonstrate a greater ability to enhance regenerative bone defect healing compared with other ASCs. The mechanisms underlying this phenomenon are not known. For example, it is not clear whether the cells themselves directly differentiate into bone-forming cells, or whether they produce factors that encourage other cells to do so. Future studies will need to be performed to answer these questions.

The authors have no disclosures to make. 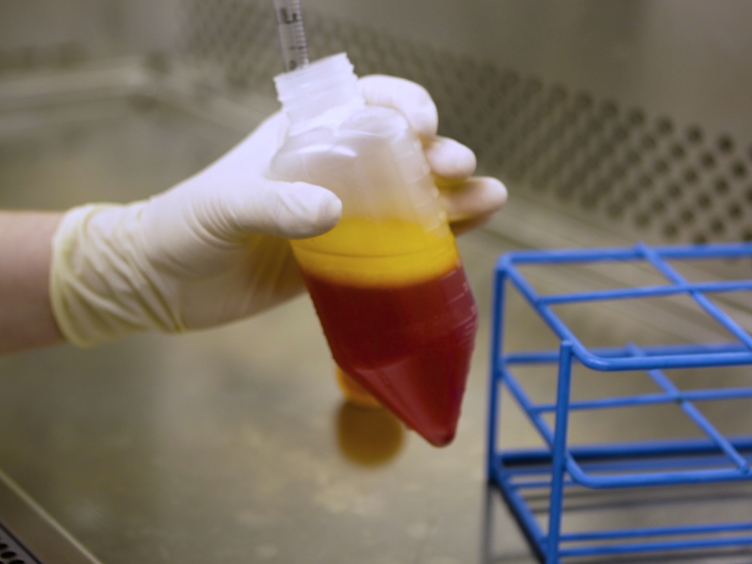