This step-by-step protocol provides a detailed description of the experimental setup and data analysis for the assessment of inflammatory responses in hiPSC-ECs and the analysis of leukocyte adhesion under physiological flow.

Inflammation plays a pivotal role in many pathological conditions, including cardiovascular and neurodegenerative disorders, sepsis and adverse drug responses (ADRs). Endothelial cells (ECs) play an essential role in regulating inflammatory responses via the induction of pro-adhesive receptors, such as E-selectin, intercellular adhesion molecule-1 (ICAM-1) and vascular cell adhesion molecule-1 (VCAM-1) on their surface1,2. Microvascular ECs in different tissues are known to exhibit heterogeneity in inflammatory responses3,4. Furthermore, genetic background or certain genetic conditions might result in the differences in inflammatory responses between individuals; it is therefore important to have access to ECs from different individuals. More recently, human induced pluripotent stem cells (hiPSCs)5, that can be derived from virtually any individual, were shown to serve as a reliable and renewable source of ECs6,7,8,9. Therefore, the assessment of inflammatory responses and leukocyte recruitment in hiPSC-ECs is valuable, not only for modeling of certain genetic disorders, but also to provide indications of inter-individual variability and to use as a tool for personalized medicine in the future.

Flow assays provide a useful tool for studying endothelial-leukocyte interaction. Advances in microfluidic devices enable the reproduction of physiological fluid flow conditions with precise control of vascular bed-specific shear stress levels. Live imaging allows monitoring of the cascade of events of leukocyte capture, rolling, crawling, adhesion and transmigration. Several flow assays to study endothelial-leukocyte interaction have been developed, however, they all utilize primary ECs10,11,12,13. Here, we will describe in detail the assay for the assessment of human leukocyte adhesion to hiPSC-ECs under physiological flow. In this procedure, we describe optimized conditions of hiPSC-EC stimulation with pro-inflammatory stimuli, such as tumor necrosis factor alpha (TNFα), dissociation, seeding into a microfluidic chip with eight parallel channels. We describe a step-by-step protocol for the perfusion of hiPSC-ECs with the suspension of fluorescently labeled leukocytes in microfluidic chips, live cell imaging and automated counting of adherent leukocytes.

This protocol is useful for the assessment of inflammatory responses in hiPSC-ECs in drug screening, disease modeling and personalized regenerative medicine.

1. Preparation of Solutions and Reagents

NOTE: In the protocol described here, hiPSC-ECs were differentiated, purified, cryopreserved and thawed as previously described8.

NOTE: In the protocol described here, a commercially available monocytic cell line (THP-1) was used. Alternatively, peripheral blood mononuclear cells or neutrophils can be used. Isolation of peripheral blood monocytes and neutrophils can be performed using standard procedure11. Perform all steps described in this paragraph in a cell culture hood.

6. Preparation of the Microfluidic Pump

7. Preparation of the Microfluidic Chip for Live Imaging

9. Completing the Assay and Cleaning the Microfluidic Pump

First, the response of hiPSC-ECs to the stimulation with pro-inflammatory agent TNFα should be examined, as previously described7. TNFα treatment for 12 h triggers the upregulation of E-selectin with the peak at 6 h after starting treatment. Additionally, ICAM-1 is upregulated 6 - 12 h post-treatment. Although we did not observe the expected upregulation of VCAM-1, it is typically observed in primary human umbilical vein endothelial cells (HUVECs). We found overnight (12 h) TNFα treatment to be the most convenient for the leukocyte adhesion assay.

Labeling of leukocytes with fluorescent tracer is beneficial for phase contrast images in automated image quantification, as it makes the cell identification step easier, especially because the leukocytes adhere to the monolayer of ECs and it is often difficult for software to distinguish different cell types.

Free open-source image processing software is very useful for automated quantification of adherent leukocytes. The pipeline described in the protocol here is based on primary object identification using adaptive thresholding of fluorescent images of leukocytes (Figure 4A). Filtering of identified objects based on a minimal area additionally filters out falsely identified objects, such as cell debris, autofluorescence or any other non-specific fluorescent signal (Figure 4C, D).

One microfluidic chip with eight parallel channels allows the comparison of two independent groups, for instance, ECs differentiated from independent hiPSCs, such as healthy donors or patients with genetic disorders. Additional controls, such as untreated ECs, or pre-treatment with an ICAM-1 blocking antibody can be included as well10,11. Two to three microfluidic chips can be processed at a time. For the robustness of the conclusions, a minimum of three independent biological experiments performed on independent days is recommended. 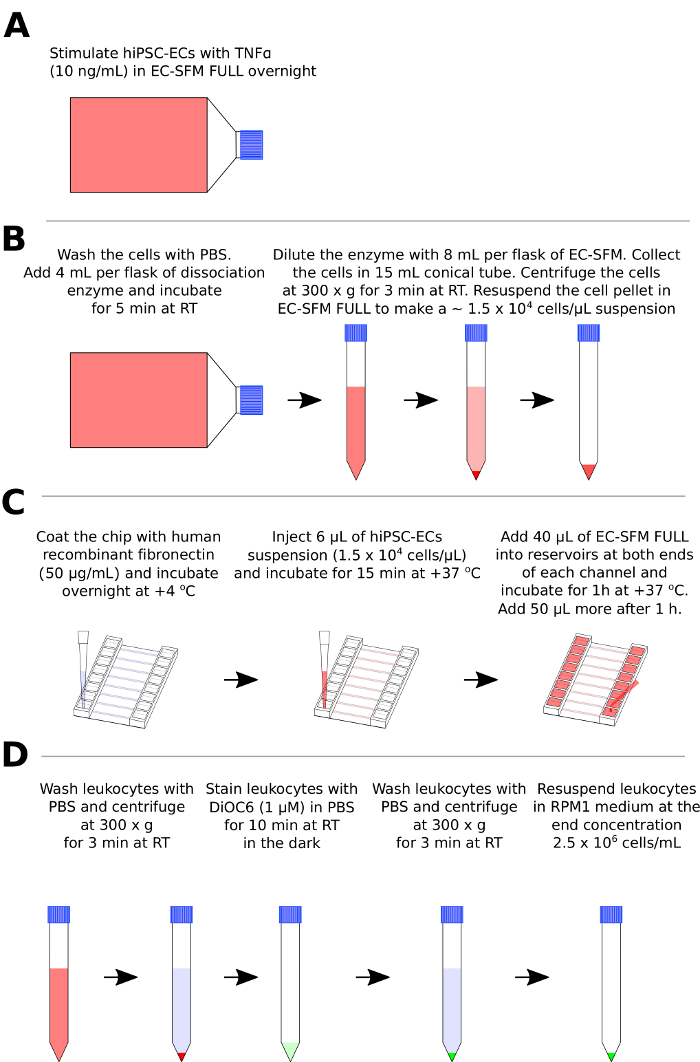 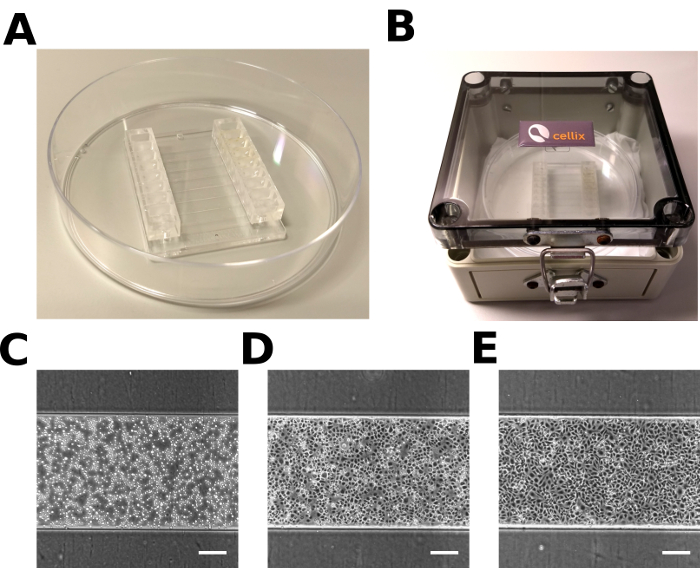 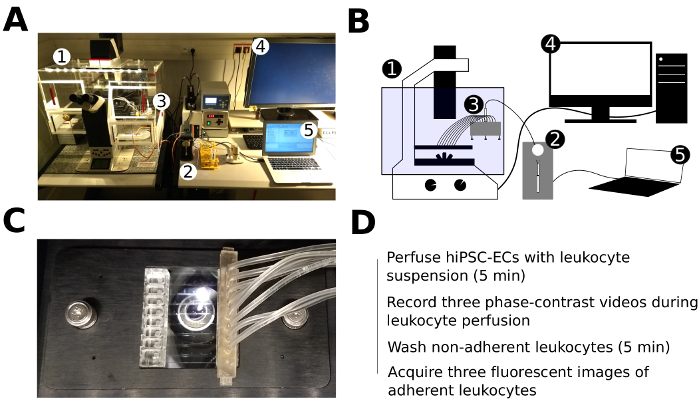 Figure 3: Experimental setup of the live cell imaging and leukocyte perfusion assay. (A, B) Photo (A) and schematic representation (B) of the experimental setup of the live cell imaging and flow assay: (1) - inverted fluorescent microscope with mounted live imaging chamber (5% CO2, 37 °C, humidified), (2) - microfluidic pump, (3) - 8-channel manifold, (4) - PC for microscope control and image acquisition, (5) - PC for microfluidic pump control. (C) Microfluidic chip with the inserted tubing of the 8-channel manifold fixed in a plate holder and mounted in the motorized stage of the microscope. (D) Schematic representation of the major steps of the flow assay. Please click here to view a larger version of this figure. 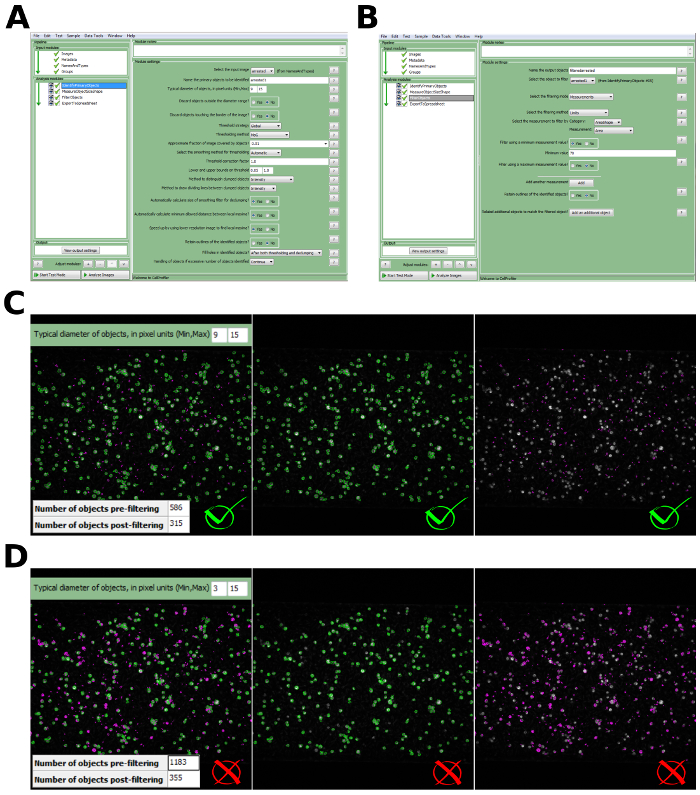 This protocol describes the characterization of hiPSC-EC treatment with pro-inflammatory stimuli, such as TNFα, functional assessment of leukocyte adhesion to hiPSC-ECs in the flow assay using live imaging and automated counting of adherent leukocytes.

Overnight stimulation of hiPSC-ECs with TNFα results in the elongated appearance that typically indicates an activated pro-inflammatory phenotype in ECs. During the optimization stage, expression levels of E-selectin, ICAM-1, VCAM-1 should be verified by FACs7,8, and primary human umbilical vein ECs (HUVECs) are advisable to be included as positive controls.

Optimal hiPSC-ECs dissociation and seeding density should be reached to achieve a confluent monolayer without forming cell clumps and channel clogs. It is critical to re-suspend leukocytes right before perfusion in order to avoid cell precipitation and maintain a constant concentration when assaying each channel. Human peripheral blood leukocytes, such as monocytes and neutrophils can be used, or established monocytic cell lines, such as THP-1 or HL-60 could be used as an alternative.

It is advisable that the protocol is run by two operators where one prepares the cells and the second prepares the microfluidic system and flow assay. This ensures that ECs are plated into microfluidic chips within a constant time-window prior to processing and improves the accuracy and reproducibility of the results. In addition, this also allows setting up blinded experiments to avoid bias in the results.

For successful cell detection with the automated image processing pipeline, it is important to acquire images in focus with a high signal-to-noise ratio and to avoid autofluorescence of non-specific objects, such as cell clumps. Of crucial importance is the correct specification of minimal and maximal limits of the typical size of adherent leukocytes that need to be identified. One can estimate the typical size of leukocytes using a line measurement tool in ImageJ. For instance, in our analysis, we used the range of 9–15 pixels which corresponds to the physical size of 10.3–17.1 µm (Figure 4C). When using a wrong range, e.g., 3–15 pixels (3.4–17.1 µm), a single leukocyte is identified not as one cell, but rather its subparts are identified as separate objects (Figure 4D). This leads to the false number of objects to be identified.

Many objects of a low intensity and smaller surface area than leukocytes may be detected using the provided adaptive thresholding method. This might take place due to autofluorescence or any other non-specific fluorescent signals. Nevertheless, these non-specific objects, if their area is lower than the typical area of a single leukocyte, can be filtered by defining the minimally accepted surface area (Figure 4C).

The flow assay described here allows direct assessment of leukocyte adhesion to an EC monolayer, elucidating the interaction of these two cell types, but does not take into account other cell types, such as pericytes that are present in the vascular wall and might also participate in the regulation of leukocyte extravasation15. Integrating a 3D culture microenvironment with other cell types could improve the physiological relevance of the system. Despite these limitations, the flow assay for the assessment of inflammatory responses described here provides a valuable tool for basic characterization and disease modeling applications of hiPSC-ECs.

The authors would like to acknowledge the following grants: European Research Council (ERCAdG 323182 STEMCARDIOVASC); Netherlands Organ-on-Chip Initiative, an NWO Gravitation project funded by the Ministry of Education, Culture and Science of the government of the Netherlands (024.003.001). 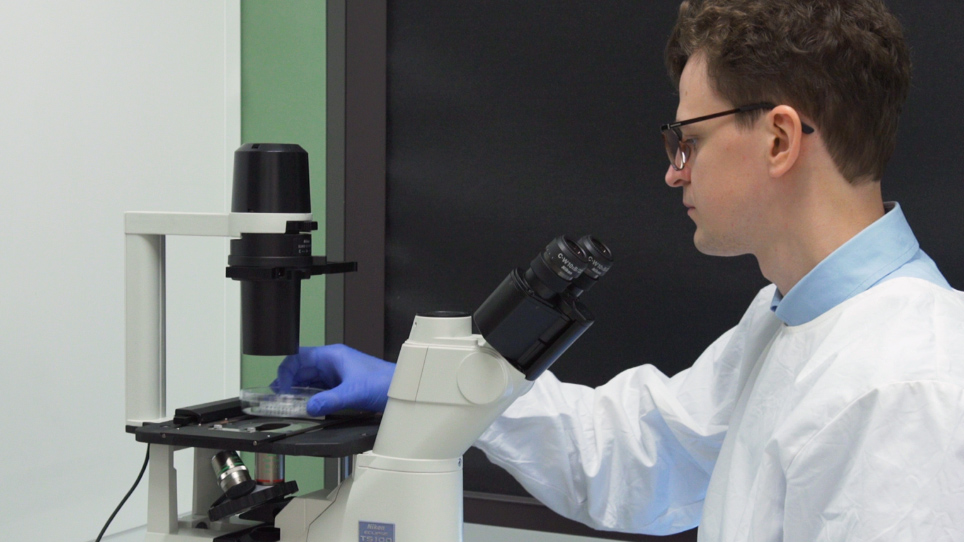