In this article, we describe, in detail, a protocol for the generation of neurosphere cultures from postnatal mouse neural stem cells derived from the main mouse neurogenic niches. Neurospheres are used to identify neural stem cells from brain tissue allowing the estimation of precursor cell numbers. Moreover, these 3D structures can be plated in differentiative conditions, giving rise to neurons, oligodendrocytes and astrocytes, allowing the study of cell fate.

The neurosphere assay is an extremely useful in vitro technique for studying the inherent properties of neural stem/progenitor cells (NSPCs) including proliferation, self-renewal and multipotency. In the postnatal and adult brain, NSPCs are mainly present in two neurogenic niches: the subventricular zone (SVZ) lining the lateral ventricles and the subgranular zone of the hippocampal dentate gyrus (DG). The isolation of the neurogenic niches from postnatal brain allows obtaining a higher amount of NSPCs in culture with a consequent advantage of higher yields. The close contact between cells within each neurosphere creates a microenvironment that may resemble neurogenic niches. Here, we describe, in detail, how to generate SVZ- and DG-derived neurosphere cultures from 1−3-day-old (P1−3) mice, as well as passaging, for neurosphere expansion. This is an advantageous approach since the neurosphere assay allows a fast generation of NSPC clones (6−12 days) and contributes to a significant reduction in the number of animal usage. By plating neurospheres in differentiative conditions, we can obtain a pseudomonolayer of cells composed of NSPCs and differentiated cells of different neural lineages (neurons, astrocytes and oligodendrocytes) allowing the study of the actions of intrinsic or extrinsic factors on NSPC proliferation, differentiation, cell survival and neuritogenesis.

The neurosphere assay (NSA) was firstly described in 19921,2 and still remains a unique and powerful tool in neural stem cell (NSC) research. The isolation of NSCs from the main neurogenic regions has challenging issues because the requirements to maintain these cells in physiological conditions remain poorly understood. In the NSA, cells are cultured in a chemically defined serum-free medium with the presence of growth factors including the epidermal growth factor (EGF) and the basic fibroblast growth factor (bFGF)1,2,3. Neural precursor cells (stem and progenitors) are selected by using these mitogens since these cells are EGF and FGF-responsive entering a period of active proliferation while other cells, namely differentiated cells, die4. Neural precursor cells grow as neurospheres, which can be then passaged to further expand the pool of these cells5. Importantly, since these neural stem progenitor cells (NSPCs) are multipotent they are able to differentiate into the three major cell types of the central nervous system (CNS): neurons, oligodendrocytes and astrocytes5.

The NSA provides a renewable source of undifferentiated CNS precursors, which can be used to study several processes including NSC proliferation and self-renewal, and neuronal and glial differentiation, in both physiologic and disease context. Moreover, in vitro studies can be used to evaluate the degree of intrinsic specification present in neural precursors during development, as well as to study the full potential of the cells, by removing extrinsic cues associated with their normal environment6. The neurosphere model is valuable to evaluate putative regulators since by maintaining the cells in a medium devoid of serum, the environmental cues are only provided by the surrounding cells6. Moreover, in the NSA, NSPCs are easily expanded in culture, the density of cells per area is high and the heterogeneous composition of the neurospheres has some similarity to in vivo niches6. These well-established advantages are the reason why this methodology has been widely used by many researchers.

The following protocol describes in detail all the processes from the isolation of postnatal NSPC population from the two main neurogenic regions, the subventricular zone (SVZ) and the hippocampal dentate gyrus (DG), to the expansion of those cells as neurospheres, as well as to the differentiation into neurons, astrocytes and oligodendrocytes. Lastly, different assays are also described to access stemness and multipotency properties of SVZ- and DG-derived NSPCs.

All experiments were performed in accordance with the European Community (86/609/EEC; 2010/63/EU; 2012/707/EU) and Portuguese (DL 113/2013) legislation for the protection of animals used for scientific purposes. The protocol was approved by the "iMM's institutional Animal Welfare Body - ORBEA-iMM and the National competent authority - DGAV (Direcção Geral de Alimentação e Veterinária)."

NOTE: The following protocol can be applied to expand both SVZ and DG neurospheres.

11. Evaluation of neuritogenesis by generating a differentiated monolayer of cell

NOTE: Neurospheres obtained from cell expansion, either from primary or passaged neurospheres (obtained in sections 5 or 6) can be differentiated into cells from different neural lineages.

SVZ and DG neurospheres, obtained by using the NSA, are composed of undifferentiated cells, positive for Sox2, a transcription factor involved in the self-renewal capacity and positive for nestin, an intermediate filament protein expressed in NSPCs (Figure 1A). In addition, SVZ-derived neurospheres have larger dimensions than their DG counterparts (Figure 1A). Importantly, in differentiative conditions, SVZ- and DG-derived NSPCs migrate out of neurospheres forming a pseudomonolayer of cells (Figure 1B).

Neuritogenesis can be evaluated in neurons obtained from the differentiation of SVZ and DG NSPCs at the beginning of differentiation: DIV1 (Figure 4A,D), DIV2 (Figure 4B,E) and DIV3 (Figure 4C,F). In fact, as observed in Figure 4, the length and ramification of the neurites increases with differentiation.

Importantly, these results demonstrate the potential of the NSA to evaluate the stemness and multipotency properties of NSCs derived from the two main neurogenic niches. 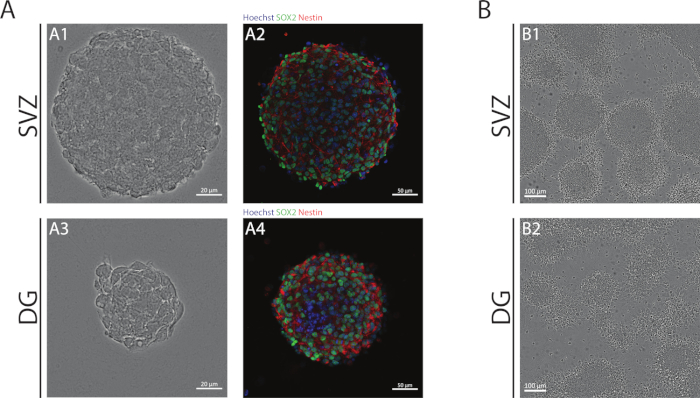 Figure 1: Subventricular zone and dentate gyrus derived NSPC cultured as neurospheres or as pseudomonolayers. (A) Representative brightfield (A1,A3) and fluorescence (A2,A4) images of SVZ- and DG-derived neurospheres, where nuclei were stained with Hoechst 33342 (blue) and NSCs for Sox2 (green) and nestin (red). (B) Representative brightfield images of pseudomonolayers generated from SVZ- and DG-derived neurospheres under differentiative conditions. Please click here to view a larger version of this figure. 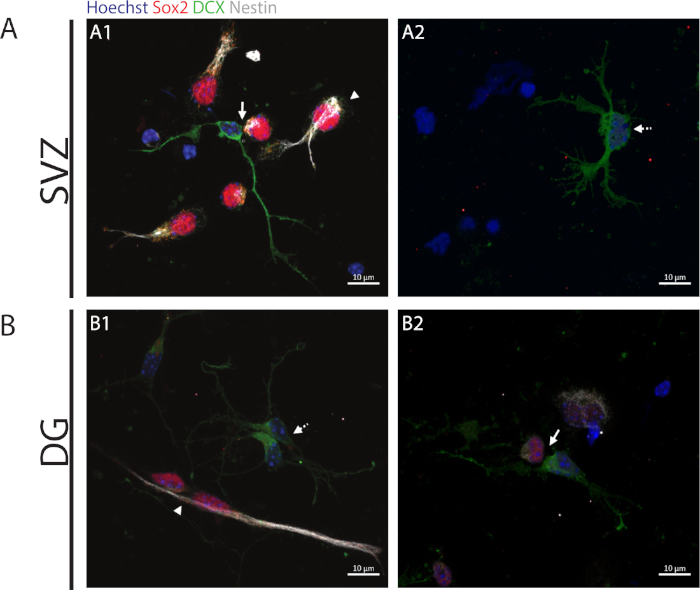 Figure 2: The cell pair assay. Representative fluorescence images of cell pairs derived from a progenitor cell division. SVZ and DG nuclei were stained with Hoechst 33342 (blue), stem-like cells for Sox2 (red) and nestin (white) as well as immature neurons with DCX (green). Arrowheads in panels A1 and B1 indicate Sox2+/+/nestin+/+/DCX-/- symmetrical self-renewing divisions, arrows in panels A1 and B2 indicate Sox2+/-/nestin+/-/DCX-/+ asymmetrical divisions, dashed line arrows in panels A2 and B1 show Sox2-/-/nestin-/-/DCX+/+ symmetrical differentiating divisions. Please click here to view a larger version of this figure. 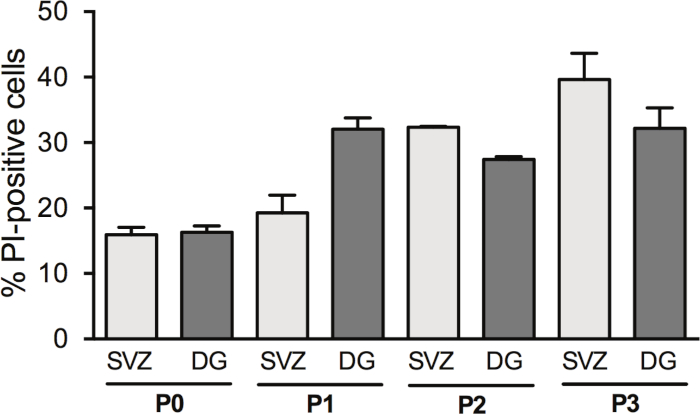 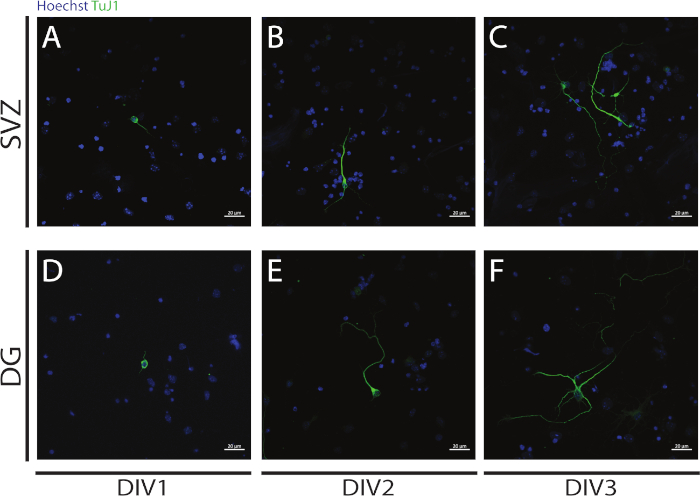 Figure 4: Neuritogenesis analysis at DIV 1, 2 and 3. Representative confocal fluorescence images of neurites, identified by the βIII-tubulin signal, in SVZ and DG neurons at (A,D) DIV1, (B,E) DIV2, and (C,F) DIV3. Please click here to view a larger version of this figure. 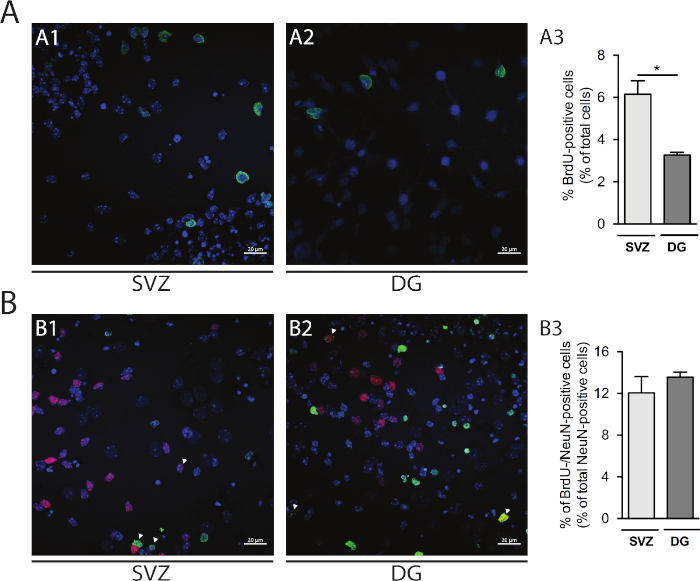 In vitro systems of NSPCs allow a better understanding of the cellular and molecular mechanisms, which can be further validated in vivo. The NSA is a very powerful method to mimic physiological conditions due to their three-dimensional structure. Moreover, this culture system is also technically easier to culture10, compared with other in vitro systems such as the monolayer culture system. Indeed, with the NSA, it is easy to control the exposed extrinsic cues during cell development, either during the expansion or the differentiation phase, by adding precise and variable amounts of factors of interest to the media as well as by culturing neurospheres with other cell types6. Furthermore, compared with monolayer cultures, in the NSA, it is possible to obtain a higher cell density from a small amount of tissue or with a small number of cells, allowing parallel studies to be performed, thus reducing the number of animals1.

The NSA is the most common method to isolate and expand NSCs11,12,13, can be used to estimate the number of precursor cells present in a given tissue sample5 and the precursor cell frequency between different conditions. However, both neurospheres and monolayer cultures do not account for quiescence NSCs14. Moreover, the NSA has some limitations11,12,13 and the resulting neurosphere frequency depends on many factors including the medium components, the dissection procedure, the dissociation process11,12,13, and neurosphere aggregation5. Indeed, in a high-density culture, neurospheres tend to aggregate. Consequently, caution must be taken when estimating the number of precursor cells in a sample. To overcome the above limitations, isolated NSPCs can also be expanded and passaged in a monolayer5,15. Importantly, using NSA to compare precursor cell frequency between different conditions is very useful and accurate because all these limitations are implicit and similar among all conditions performed in the same experiment.

There are critical steps in the neurosphere culture that need attention. In the brain harvesting step, complete removal of the meninges and good isolation of the neurogenic niches are essential to maximize the purity and yield of NSPCs. During tissue dissociation, due to the proteolytic activity of trypsin, excessive use of trypsin or longer incubation times can lead to cell lysis. Furthermore, the day of the passage is critical to obtain a healthy population of neurospheres. Passaging neurospheres with a diameter higher than 200 µm greatly affects the viability, proliferative and differentiative capacity of NSPCs. Importantly, longer cycles of passages, more than 10 can increase genetic instability6. Furthermore, coating with PDL and PLD/laminin for SVZ and DG cells, respectively, is essential to ensure good cell migration out of the neurospheres without compromising the differentiation process. In terms of the immunocytochemistry analysis, longer incubation times with PFA can compromise staining by masking the antigens and increasing the background.

The NSA is a powerful tool for providing a consistent and an unlimited source of NSPCs for in vitro studies of neural development and differentiation as well as for therapeutic purposes16,17. Indeed, this assay can be applied to genetic and behavioral models to further understand the molecular and cellular mechanisms involved in NSPC proliferation and differentiation18,19. This assay is also useful to test different drugs and compounds20,21,22 as well as to perform genetic manipulations19,23 to modulate NSC properties. In addition to immunocytochemistry, reverse transcription polymerase chain reaction and Western blot analysis can be performed to access RNA and protein expression, while electrophysiological studies and calcium imaging can be used to evaluate the function of the new-born neurons21. 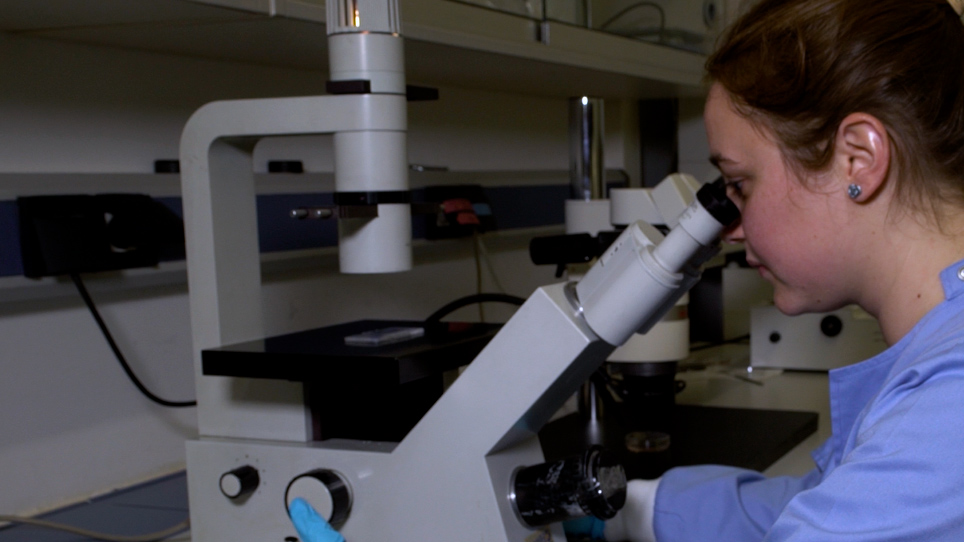