The presented protocol describes a method for a neurite outgrowth assay and neurotoxicity assessment of small molecule compounds.

Neurite outgrowth assay and neurotoxicity assessment are two major studies that can be performed using the presented method herein. This protocol provides reliable analysis of neuronal morphology together with quantitative measurements of modifications on neurite length and synaptic protein localization and abundance upon treatment with small molecule compounds. In addition to the application of the presented method in neurite outgrowth studies, neurotoxicity assessment can be performed to assess, distinguish and rank commercial chemical compounds based on their potential developmental neurotoxicity effect.

Even though cell lines are nowadays widely used in compound screening assays in neuroscience, they often differ genetically and phenotypically from their tissue origin. Primary cells, on the other hand, maintain important markers and functions observed in vivo. Therefore, due to the translation potential and physiological relevance that these cells could offer neurite outgrowth assay and neurotoxicity assessment can considerably benefit from using human neural progenitor cells (hNPCs) as the primary human cell model.

The presented method herein can be utilized to screen for the ability of compounds to induce neurite outgrowth and neurotoxicity by taking advantage of the human neural progenitor cell-derived neurons, a cell model closely representing human biology."

By maintaining their differentiation potential in producing various neural lineages, human neural progenitor cells (hNPCs) could provide a model system for studies of central nervous system (CNS) function and development7,8,9. High translational potential and physiological relevance of hNPCs as a primary human cell model offer a considerable advantage in neurite outgrowth-related drug discovery screenings. However, the maintenance and scaling of the primary cell models for high-throughput assays could be time-consuming and labor-intensive10,11,12,13.

In addition to the application of the presented method in neurite outgrowth studies, neurotoxicity assessment is another application using the hNPC-derived neurons. There are thousands of commercial chemical compounds that are either not examined or with poorly understood neurotoxicity potential. Therefore, more reliable and effective screening experiments to assess, distinguish, and rank compounds based on their potential to elicit developmental neurotoxicity is in high demand14. The increase in prevalence and incidence of neurological disorders along with the abundance of untested compounds in the environment necessitates the development of more trustworthy and efficient experiments to identify hazardous environmental compounds that may pose neurotoxicity15.

The presented method herein can be utilized to screen for the ability of compounds to induce neurite outgrowth and neurotoxicity by taking advantage of the human neural progenitor cell-derived neurons, a cell model closely representing human biology.

Ethics Statement: Fetal specimens were received from the Birth Defects Research Laboratory at the University of Washington in Seattle through a tissue distribution program supported by the National Institute of Health (NIH). The Birth Defects Research Laboratory obtained appropriate written informed consent from the parents and the procurement of tissues was monitored by the Institutional Review Board of the University of Washington. All the work was performed with approval by the Human Subject Research Office at the University of Miami8.

4. Differentiation and treatment of hNPCs

NOTE: To induce differentiation, neurospheres are disaggregated into single cells, counted and then seeded on coated plates for 5 days. Then differentiated cells are treated for 24 h with test compounds before immunostaining and fluorescence quantification.

NOTE: Cells are fixed with 4% formaldehyde. Permeabilization and blocking is then performed to improve penetration and prevent nonspecific binding of antibodies. Cells are then incubated with primary antibodies overnight. Subsequently, cells are incubated with fluorescently labeled secondary antibodies. Finally, after using DAPI to stain the nucleus, chamber slides are mounted.

NOTE: Following staining, use a confocal microscope with a 20x objective and an image size of 1024 x 1024 pixels to acquire the images of the treated cells. Take image at least from two fields per biological replicate per condition. Then use Fiji image analysis software (ImageJ 1.51u) for quantification of the neurite length. Briefly, measure the length of the longest neurite for each neuron and after averaging the values per treatment, use student’s t test for independent groups to compare the means between experimental groups and control group.

NOTE: Cytotoxicity of test compounds are evaluated in 384-well plates (see Table of Materials) using a luminescent cell viability assay (see Table of Materials). The hNPCs are prepared following the same method, except slight modifications, described in the “Differentiation and Treatment of hNPCs” section. Subsequently, a luminescent signal generated by luminescent cell viability assay is measured utilizing a microplate reader. The luminescent signal is proportional to the cellular ATP concentration which itself is directly proportional to the number of viable cells present in each well.

The protocol presented in the manuscript has successfully been used in two recently published papers22,23. Figure 3 demonstrates the use of hNPCs-derived neurons in examining the effect of HDAC inhibitors as epigenetic compounds on the extension of neurites as a marker for neurite outgrowth and subsequent neurogenic ability of small molecule compounds.

Furthermore, in Figure 4 the neurotoxicity of tested compounds (HDAC inhibitors) is also assessed by simultaneously differentiating the hNPCs in 384-well plates, showing the potential of the presented cell model (hNPCs) for neurotoxicity assessment and the ability to scale up to test neurotoxicity for a higher number of compounds.

In another paper by Sartor et al. (Figure 5), measurement of the neuronal cell fluorescence intensity to quantify the abundance of H4K5ac, as a histone mark, after treating the neurons differentiated from hNPCs with epigenetic modifier compounds is successfully demonstrated23. Additionally, as illustrated in Figure 6, in an unpublished work, the protocol has been used to visualize a presynaptic protein, synaptophysin, to check for the possible synaptogenic effect of small molecule compounds. 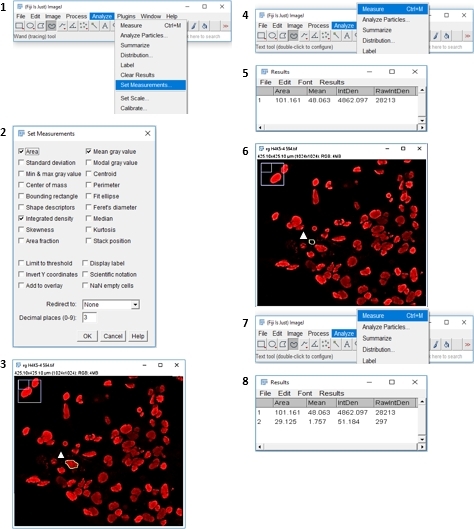 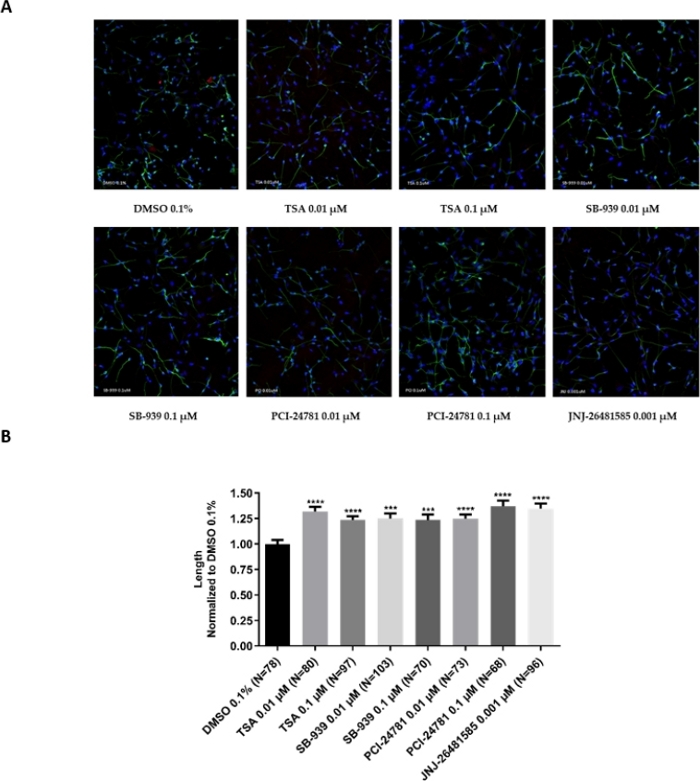 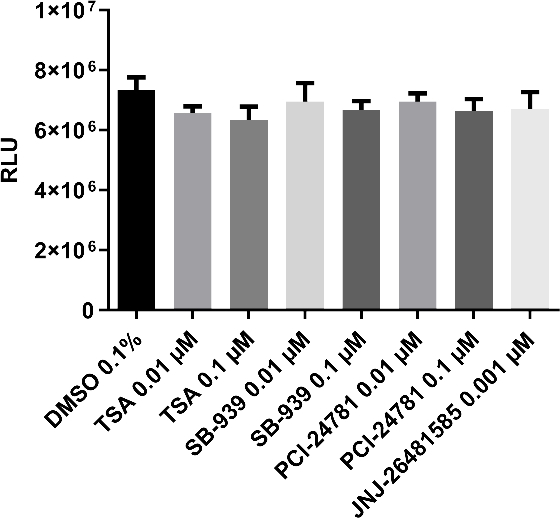 Figure 4: Neurotoxicity assessment using luminescent cell viability assay.
hNPCs are seeded and differentiated to neurons in the 384-well plate according to the same method used for neurite outgrowth assay. Thereafter the effect of test compounds on the viability of cells after 24 h of exposure is measured. As shown, there is no significant toxicity upon treatments. One-way ANOVA is used for data analysis and a p value < 0.05 is considered statistically significant. This figure has been modified from Bagheri et al.22. Please click here to view a larger version of this figure. 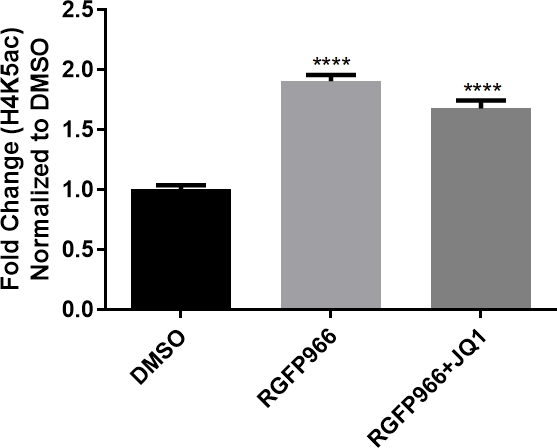 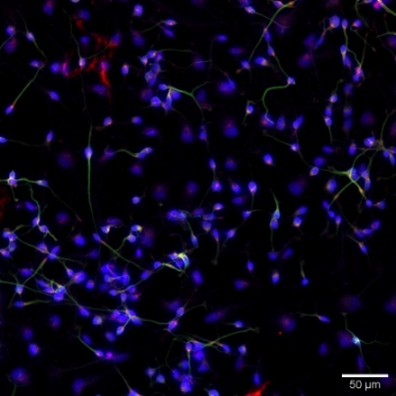 This protocol is one of the few published papers describing the test for neurite length upon treatment with test compounds. Furthermore, we describe how to use hNPCs for a neurite outgrowth assay and neurotoxicity assessment. By utilizing this neurite outgrowth assay and neurotoxicity assessment on hNPCs-derived neurons, the neurogenic potential of a category of epigenetic small-molecule compounds, HDAC inhibitors, in inducing neurite outgrowth is demonstrated22. Furthermore, in another paper presented by Sartor et al., this protocol is used to quantify the fluorescence intensity of H4K5ac, a histone protein, upon treatment with several epigenetic modifier compounds23.

Cognitive function relies on proper wiring and functional connections within neuronal circuits. Detailed and consistent quantification of various aspects of neuronal morphology as a phenotypic screening approach is essential to achieve reliable insight in the underlying pathways leading to brain disorders ranging from neurodevelopmental to psychiatric disorders. Phenotypic screening is considered a notably effective approach in exploring small-molecule compounds as putative drug candidates to modulate a cellular phenotype. In this approach, instead of interrogating only a single target, all components and pathways of the cell are examined24.

Neuronal morphology including shape, structure, and connectivity are considered to be key features of neuronal function. Genetic perturbations that alter the morphology of neurons or synaptic protein localization and level could notably contribute to the analysis of disease-causing mutations. Therefore, reliable methods are required to assess the impact of perturbagens on neuronal morphology25.

The hNPCs, are isolated from the embryonic mammalian brain, which are subsequently cultured in vitro in the presence of mitogens. These cells are made up of neurospheres that are characterized as floating cellular aggregates comprised of neural progenitor cells and radial glial cells. The hNPCs provide a desirable model system for nervous system function and development by maintaining their differentiation potential in producing various neural lineages7,8,9. Neurite number, intensity, length, and width together with synaptic characteristics including pre- and post-synaptic proteins modifications are among neurite and synaptic changes that could be reliably and efficiently measured using the presented method herein.

Due to an increase in the prevalence of neurological disorders such as attention deficit hyperactivity disorder and autism, the neurotoxicity potential of environmental chemicals on children remains a public concern15,26. Therefore, the usability of hNPCs-derived neurons for reliable and efficient neurotoxicity assessment is also examined. As demonstrated in Figure 4, hNPCs could be adapted and scaled up for neurotoxicity assessment in 384-well plates.

Neurotoxicity assessment as an application for the introduced cell model is feasible by either differentiating the neurospheres into neurons before plating in 384-well plates or differentiating the cells while the neurospheres are plated in 384-well plates as single cells. In the latter approach, high precision pipetting skills are required for plating the exact number of neurospheres that are disaggregated into single cells and also for the following treatment procedures with differentiation-inducing medium. Considering the pipetting skills required, differentiation before plating is recommended to achieve more reproducible results. Moreover, bulk cell sorting by fluorescence activated cell sorting (FACS) could also potentially be used to accurately separate the required number of cells circumventing the need for high precision pipetting skills.

It is advised to start the neurite outgrowth assay by neurotoxicity assessment to avoid repeated neurite outgrowth assays with various doses of the same compound to reach for nontoxic concentration. Therefore, combining a neurotoxicity assessment by utilizing the luminescent cell viability assay against a dose-response curve of test compounds will result in finding the right dosage with minimum effort. The luminescent cell viability assay is a highly sensitive method to determine the number of viable cells in a cell culture. The method works on quantitation of the ATP present in culture as an indicator of cellular metabolism. The add, mix, and measure format of the assay provides a simple and rapid approach to check for cell viability and cytotoxicity of test compounds.

There are some limitations to the presented protocol as follows. Due to availability and inherent variability, the use of physiologically relevant primary cells is limited25. hNPCs have a slow proliferation rate, which could limit its utilization. Manual large-scale analysis of fluorescent images of neurons is time-consuming and susceptible to experimenter bias. hNPCs could be considered as young neural cells, not representing age-related epigenetic modifications accumulating in cells throughout a person’s life. As neurodegenerative disorders occur in older individuals, hNPCs may lack adequate physiological relevance to be an appropriate model for late onset conditions.

All authors indicate no potential conflicts of interest.

This research was funded by NIMAD research grant (940714) awarded to MAF. 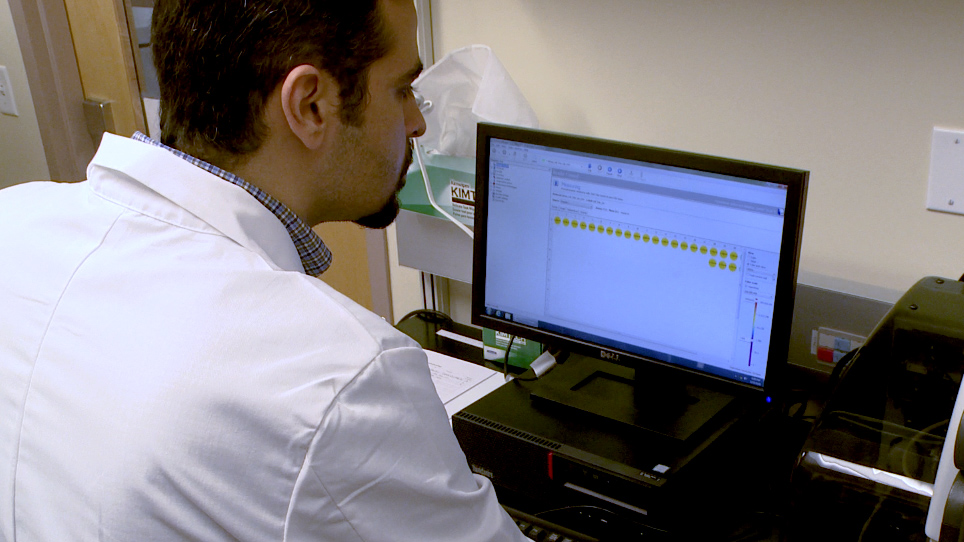