The pathophysiology of primary osteoarthritis (OA) remains unclear. However, a specific subclassification of OA in relatively younger age groups is likely correlated with a history of articular cartilage damage and ligament avulsion. Surgical animal models of OA of the knee play an important role in understanding the onset and progression of post-traumatic OA and aid in the development of novel therapies for this disease. However, non-surgical models have been recently considered to avoid traumatic inflammation that could affect the evaluation of the intervention.

In this study, an intra-articular cartilage lesion rat model induced by in vivo cyclic compressive loading was developed, which allowed researchers to (1) determine the optimal magnitude, speed, and duration of load that could cause focal cartilage damage; (2) assess post-traumatic spatiotemporal pathological changes in chondrocyte vitality; and (3) evaluate the histological expression of destructive or protective molecules that are involved in the adaptation and repair mechanisms against joint compressive loads. This report describes the experimental protocol for this novel cartilage lesion in a rat model.

Traditionally, anterior cruciate ligament (ACL) transection or destabilization of the medial meniscus has been considered optimal for investigating post-traumatic osteoarthritis (PTOA) in small animals. In recent years, non-invasive cyclic compression models have been used to study PTOA. This model was originally designed to investigate the cancellous bone response to mechanical loading1 and was then modified as a non-surgical animal model for PTOA studies2,3,4,5,6. The rationale is to collide the articular cartilage by applying a periodic external force, which triggers a series of inflammatory responses. However, this model has only been applied to mice, and the appropriate magnitude of loading on larger animals has not been discussed.

Another problem with the previous model is that the high-volume protocol included too many cycles, which caused excessive thickening of the subchondral bone, an unwanted side effect, in several samples7. Therefore, a novel method of cyclic compression with the appropriate magnitude for large animals and a lower loading side effect was developed8. The overall goal of the current article is to describe the protocol of the non-invasive cyclic compression model in rats and observe the representative results of cartilage degeneration. The current protocol would help readers interested in the application of the non-invasive cyclic compression model on rats.

The protocol was approved by the Animal Research Committee of Kyoto University (approval number: Med kyo 17616).

1. Perform in vivo cyclic compression on the rat knee

Histology showed that the articular cartilage of the rat knees that underwent 20 N dynamic loading was damaged, and one focal lesion zone was confirmed in the lateral femoral condyle in all the samples (Figure 4). However, the lesion size did not progressively increase during the 8-week observational period. The border that corresponded to the interface of the lesion and the unaffected cartilage could be observed in the affected area. 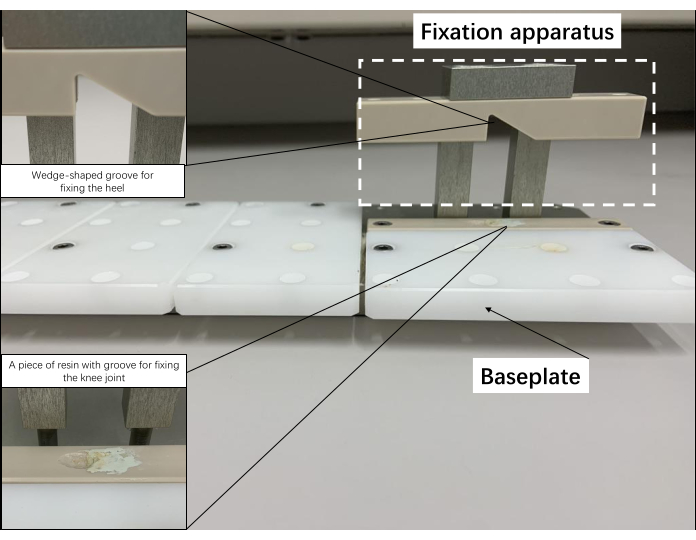 Figure 1: The fixation device consists of a baseplate and a fixation apparatus. The base plate (length: 27.5 cm, width: 13 cm) has a resin concave groove (length: 0.8 cm, width: 0.4 cm) on the posterior side to accommodate the flexed knee joint of the rat. The fixation apparatus has a wedge-shaped groove (groove width: 1.5 cm, groove depth: 1 cm) that accommodates the rat's heel, which is nested in the baseplate between two metal bars. The top of the fixation apparatus will be in direct contact with the load cell of the stress/tensile testing instrument. Please click here to view a larger version of this figure. 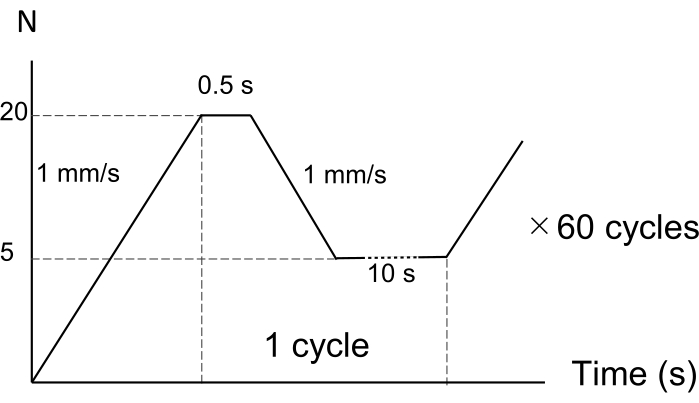 Figure 2: Load profile for one cycle of loading. Please click here to view a larger version of this figure.

Figure 3: Spatiotemporal assessment of chondrocyte viability in the lesion area. After sacrifice, the knee joint was dissected and separated using small forceps and scissors. Solutions of calcein AM and EthD-1 stains were prepared by diluting the original kit (Table of Materials) at 1:500 and 1:4,000 in 5 mL of PBS, respectively. The samples were incubated for 20 min at room temperature. Control samples were immersed in PBS under the same conditions. Fluorescence images were obtained using a fluorescence microscope (Table of Materials) using fluorescein isothiocyanate (495 nm/519 nm) and propidium Iodide (535 nm/617 nm) channels. The vital chondrocytes displayed green fluorescence, whereas dead cells fluoresced red. Compared to the chondrocytes in control samples (A), the number of dead chondrocytes on the loaded rat knee was increased at 1 h (B) and occupied most of the area in the affected region at 12 h (C). Green and red fluorescence represent the regions of the live and dead chondrocytes, respectively. Scale bars = 100 µm. Abbreviations: calcein AM = calcein acetoxymethyl ester; EthD-1 = ethidium homodimer-1; PBS= phosphate-buffered saline. Please click here to view a larger version of this figure. 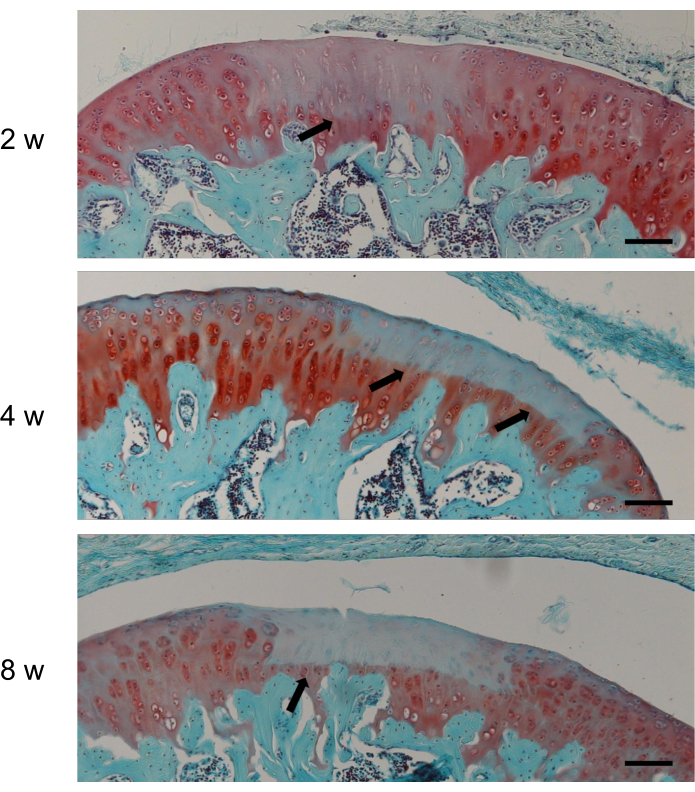 Figure 4: Representative safranin O staining of the femoral condyle in the loaded knee. A slide showing the sagittal sections of the lateral femoral condyle, which were stained with a safranin O/Fast Green and hematoxylin solution. Compared to the control, the safranin O staining intensity in the affected area was decreased after loading, and a clear border (arrow) of the upper/calcified cartilage was observed. Scale bars = 100 µm. Abbreviation: w = week.Please click here to view a larger version of this figure.

For the first time, the current protocol shows how to establish a model of loading-induced cartilage lesion on the lateral femoral condyle in rats, similar to the intra-articular damage model in smaller rodents such as the mouse2. However, the loading protocol in mice caused severe osteophyte formation and cruciate ligament lesions, which was not ideal for evaluating the effects of cyclic compression. The current protocol created a focal cartilage lesion in rats with a much lower loading force. Correct loading method settings are critical for the protocol because only the appropriate magnitude, speed, and duration of stress can destroy the cartilage without damaging the bone tissue.

Setting the displacement limit (protocol step 1.3.1) is also crucial as it immediately stops the instrument in case of ligament rupture or if the rat wakes up from anesthesia during the loading session. The optimal maximum load and the age of the rat remain to be determined. However, in the preliminary experiments, a load of over 50 N resulted in a high probability of ACL rupture in the rat's knees. Moreover, the current model is difficult to reproduce in older (>36 weeks old) rats, possibly due to the stiffness of the cartilage as growth occurs.

Although the destructive load threshold for younger rats was not determined, it is believed that future studies should keep the maximum load under 20 N to observe any anabolic effects on the cartilage. The scope and localization of the lesion area were relatively straightforward to establish, even for those new to the field, as estimated by the chondrocyte-degenerative volume in each sample, which potentially focused on the subsequent evaluation of the intervention to a relatively narrow cartilage area.

Histological staining demonstrated that the scope of the lesion area was relatively steady during the 8-week observation period. However, Mankin's scores deteriorated continuously while the matrix staining and cell distribution scores increased in the affected area. Moreover, there was an obvious color deviation between the middle layer and the calcified cartilage, which illustrated that only the cartilage above the tidemark was affected by the interarticular compression.

On the contrary, apart from mild fibrillation in rare samples, the integrity of the cartilage remained largely intact throughout the entire observational period, which is different from progressive OA injury models10. Therefore, a non-surgical model may be better for the assessment of cartilage interface collision-induced focal lesions, which are more common in sports injuries. In the future, the current model will be used to assess the effects of medication or physical therapy, such as hyperthermia therapy and aerobic joint exercise, on traumatic cartilage damage. Moreover, chondrocyte anabolism and catabolism in response to cyclic mechanical stimulation could also be validated in vivo in animals using this model.

The current protocol had several limitations. First, only cartilage lesions on the lateral femoral condyle were investigated. The lesion on the lateral tibia should also be evaluated in future studies. Second, the lesioned part of the articular cartilage studied in the current protocol was not the main loading-bearing region during walking. Due to the heterogeneity of cartilage, the stiffness of the intra-articular cartilage may differ from the part examined in the current study. Thus, these findings can only be used as a reference. Finally, the model did not show any significant progression of cartilage degeneration, which is an important feature of OA development. Further studies could combine invasive surgery with pre-loaded lesions to observe spatiotemporal changes.