We developed the Visual-Motor Response to quantitate the motor output of larval zebrafish in response to light increments and decrements. We also examined zebrafish vision mutants, including the no optokinetic response (nrc) mutants, which were thought to be completely blind when tested by another vision assay, the optokinetic reflex.

The optokinetic reflex (OKR) is a basic visual reflex exhibited by most vertebrates and plays an important role in stabilizing the eye relative to the visual scene. However, the OKR requires that an animal detect moving stripes and it is possible that fish that fail to exhibit an OKR may not be completely blind. One zebrafish mutant, the no optokinetic response c (nrc) has no OKR under any light conditions tested and was reported to be completely blind. Previously, we have shown that OFF-ganglion cell activity can be recorded in these mutants. To determine whether mutant fish with no OKR such as the nrc mutant can detect simple light increments and decrements we developed the visual motor behavioral assay (VMR). In this assay, single zebrafish larvae are placed in each well of a 96-well plate allowing the simultaneous monitoring of larvae using an automated video-tracking system. The locomotor responses of each larva to 30 minutes light ON and 30 minutes light OFF were recorded and quantified. WT fish have a brief spike of motor activity upon lights ON, known as the startle response, followed by return to lower-than baseline activity, called a freeze. WT fish also sharply increase their locomotor activity immediately following lights OFF and only gradually (over several minutes) return to baseline locomotor activity. The nrc mutants respond similarly to light OFF as WT fish, but exhibit a slight reduction in their average activity as compared to WT fish. Motor activity in response to light ON in nrc mutants is delayed and sluggish. There is a slow rise time of the nrc mutant response to light ON as compared to WT light ON response. The results indicate that nrc fish are not completely blind. Because teleosts can detect light through non-retinal tissues, we confirmed that the immediate behavioral responses to light-intensity changes require intact eyes by using the chokh (chk) mutants, which completely lack eyes from the earliest stages of development. In our VMR assay, the chk mutants exhibit no startle response to either light ON or OFF, showing that the lateral eyes mediate this behavior. The VMR assay described here complements the well-established OKR assay, which does not test the ability of zebrafish larvae to respond to changes in light intensities. Additionally, the automation of the VMR assay lends itself to high-throughput screening for defects in light-intensity driven visual responses.

This protocol outlines the steps to perform the Visual-Motor Response of zebrafish larvae to light increments and decrements in your own lab. Zebrafish are a great model system for behavioral studies. They are easy to maintain, they have large clutch sizes, and they develop quickly. For example, the eyes of zebrafish larvae are responsive to light by day 3 of development and at which time they exhibit a startle response.

Part 2: Survey of the recording apparatus

For this part of the protocol, please refer to the film to identify components and to familiarize yourself with our set up of the recording apparatus.

Part 3: Alignment of the 96-well plate with the computer grid of the video-tracking

Figure 3 is a schematic outline of the experimental outline used in all of our experiments. 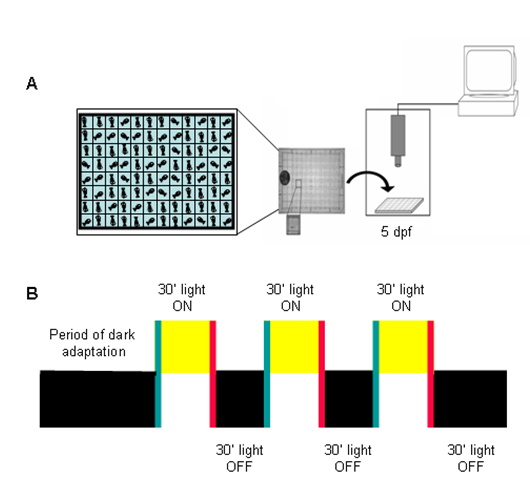 Figure 3. Experimental design of the Visual Motor Response (VMR) test. A) Individual fish are placed in a 96-well plate in a recording chamber. The activity of each fish is measured per second. B) Fish are given a period of dark or light adaptation to settle them and to obtain a baseline activity level. Periods of 30 minutes lights ON and lights OFF are introduced consecutively for a total of 3 hours. This diagram was adapted from Prober et al., 2006.

We measured the ON and OFF responses of WT fish to light increments and decrements. To confirm that these responses were dependent on eye function, we measured the activity of chk mutants, which do not develop any eyes. Figure 4 shows the average activity obtained from WT animals as well as the chk mutants.

Figure 4: WT fish have clear ON and OFF responses that are mediated by the lateral eyes. The locomotor behavior of zebrafish larvae at 5 dpf in response to 30 minutes of light ON and 30 minutes of light OFF is recorded per second. Each trace represents an average of 480 responses from 120 individual WT (blue trace) or chk mutant larvae (orange trace) recorded over 3 experiments. The chk mutants do not significantly increase their activity to either light increments or decrements and have a low baseline level of activity. This figure was adapted from Emran et al., 2007.

The nrc mutant was thought to be completely blind based on the OKR test. In the nrc mutant, the photoreceptor terminals do not form properly and the On visual pathway is severely compromised 1. Retinal ganglion cell recordings from these mutant fish revealed that they exhibit predominantly OFF-type ganglion cell responses, some abnormal ON-OFF, but no pure On-type responses 2.

Using the VMR test we showed that the nrc mutant has a normal OFF-response and a delayed and sluggish ON-response (see Figure 5). Thus, the nrc mutant is not completely blind as previously thought 2.

Figure 5: Nrc mutats increase their activity in response to changes in light intensities. Behavioral responses to light ON and OFF from WT and nrc mutant larvae at 5 dpf. Each trace represents an average of 480 responses from 120 individual fish from each genotype. The average locomotor behavior of nrc mutants (pink traces) is slightly reduced as compared to WT fish (blue traces) but remains vigorous following the light OFF stimulus. Note the slow rise time in the nrc mutant response to light ON compared to light ON response of the WT fish.

The experimental procedures we show in the film are all representative of WT fish. However, these experiments can be done analogously on mutant fish as well (see representative result section). We suggest to plate WT fish and mutant fish on the same plate in a checker board outline for optimal control purposes.

When using mutant fish on the same plate as WT fish make sure that you write down what type of fish was plated in each well. Here is a suggestion on how to keep track of the fish plated in each well (show note book with data sheet).

We used the Videotrack software in the quantization mode from Viewpoint Lifesciences. However, there are other comerically available tracking systems, including EthoVision from Noldus.Or, as other labshave done, youcould design your own tracking software.

This work was supported by National Institute of Health Grants EY0081 and 5T32UY07145 and by the Knights Templar Eye Foundation. Jason Rihel is a Bristol-Squibb Fellow of the Life Sciences Research Foundation. 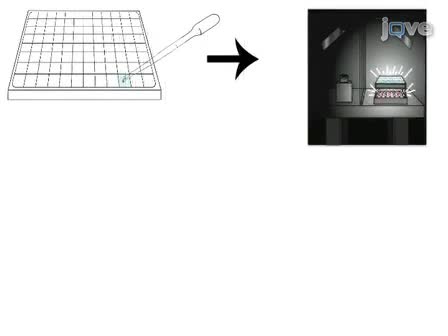