Chronological aging in yeast refers to the loss of cell viability associated with time in stationary phase. Here we describe a high-throughput method for quantitatively determining yeast chronological life span.

The budding yeast Saccharomyces cerevisiae has proven to be an important model organism in the field of aging research 1. The replicative and chronological life spans are two established paradigms used to study aging in yeast. Replicative aging is defined as the number of daughter cells a single yeast mother cell produces before senescence; chronological aging is defined by the length of time cells can survive in a non-dividing, quiescence-like state 2. We have developed a high-throughput method for quantitative measurement of chronological life span. This method involves aging the cells in a defined medium under agitation and at constant temperature. At each age-point, a sub-population of cells is removed from the aging culture and inoculated into rich growth medium. A high-resolution growth curve is then obtained for this sub-population of aged cells using a Bioscreen C MBR machine. An algorithm is then applied to determine the relative proportion of viable cells in each sub-population based on the growth kinetics at each age-point. This method requires substantially less time and resources compared to other chronological lifespan assays while maintaining reproducibility and precision. The high-throughput nature of this assay should allow for large-scale genetic and chemical screens to identify novel longevity modifiers for further testing in more complex organisms.

After two days of culture in SC media, the cells should be in stationary phase and the first age-point is ready to be taken. Subsequent age-points should be taken every 2-3 days for a minimum of two weeks. For each age point:

Typically, six age-points are taken over the course of two weeks. The age-points are taken at days 2, 4, 6, 9, 11, and 13. Depending on the experimental design and strains being tested, it may be desirable to take age-points more or less frequently or for longer than 2 weeks. It is important to load the Honeycomb plate in the same order for every age-point such that each aging culture corresponds to the same well position at every age-point, as this will make data analysis much easier.

At the completion of the experiment, you will have plotted the survival curve and performed data analysis sufficient to determine the chronological aging potential for several different strains or conditions. If performed properly, the growth curves obtained from the Bioscreen C MBR machine should look similar to those shown in Figure 2 and the resulting survival curves should resemble those shown in Figure 3. Generally, wild-type cells cultured under the conditions described here will have a median chronological life span on the order of 7 days. Substantial variation in survival is observed in different strains and under some conditions, such as growth in 0.05% glucose media, median survival can exceed 30 days. 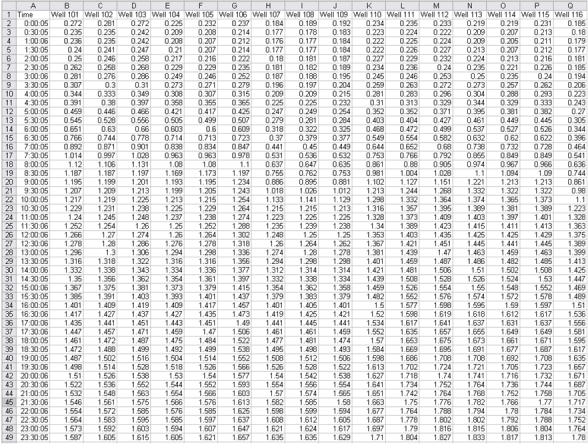 Figure 1. Data output from the Bioscreen program “EZExperiment”. Column A displays the time at which an absorbance reading was taken. Successive columns represent the wells of the Honeycomb plate inoculated with cells taken from aging cultures. 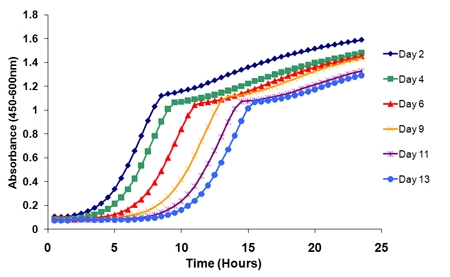 Figure 2. Outgrowth curves from a single biological replicate over the course of an experiment. There is a distinct shift in the curves over time as cells in the aging culture lose viability. The length of time between the initial time point (day 2) and a successive time point determines viability at that particular age. 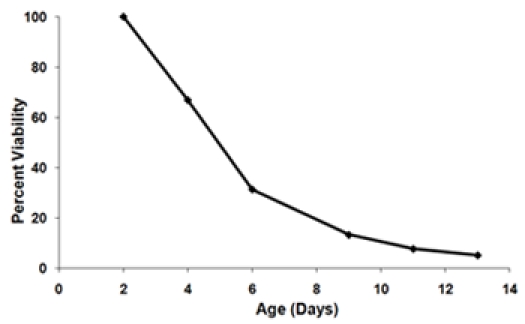 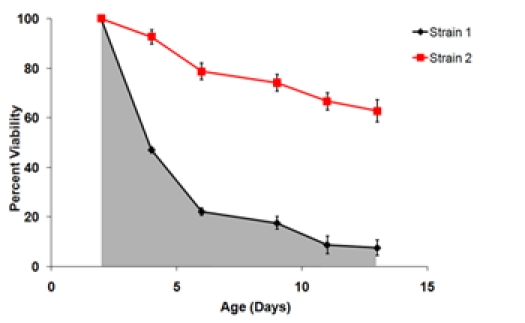 Note: This recipe accounts for auxotrophies in diploid BY4743 strain. Amino acid auxotrophies should be compensated for by adding a 5X final concentration to the synthetic complete medium.

The high-throughput chronological life span assay described here is an effective method for quantifying the aging potential of large numbers of strains with high accuracy and precision. The primary advance of this method over classical methods for determining survival by counting colony-forming units (e.g. see 3) is the use of a shaker/incubator/plate reading device such as the Bioscreen C MBR machine to obtain high-resolution growth curves at each age-point. In direct comparison with low-throughput chronological life span assays, this method has been shown to achieve comparable (or better) precision, while substantially increasing the number of samples that can be analyzed 4.

The method as described above is suitable for screening genetic variants for altered chronological longevity under commonly used culture conditions for aging studies. This method can easily be adapted, however, for alternative culture conditions, such as pre-adaptation to respiratory growth (glycerol carbon source) 5, maintenance in water rather than expired media, or studies of dietary restriction 4. Adaptation for pharmacological screening purposes can also be envisioned, for example by adding different chemical compounds from a library to the aging media rather than inoculating different strains.

The method described here also provides for flexibility in the age-points used for life span determination. As described above, age-points are taken at days 2, 4, 6, 9, 11, and 13 of the experiment. These age-points are suitable for screening the yeast ORF deletion collection for mutants with altered life span, but may not be suitable for other applications, culture conditions, or genetic backgrounds. It should be noted, however, that if comparison across multiple experiments is desired, the same set of age-points should be used in each experiment.

During the course of performing chronological life span experiments, we have noted that periodically a subset of cells in the aging culture will re-enter the cell cycle, a phenomenon referred to as ‘gasping’ 6. Gasping can be observed as a leftward shift in the outgrowth curve at one or more later age-points, corresponding to an increase in the number of viable cells in the aging culture. Cultures where gasping has occurred should be removed from the analysis, unless viability is already low enough that subsequent age-points will not significantly influence SI.

Routine maintenance of the Bioscreen C MBR machine is necessary to obtain reproducible and accurate longevity data. It is essential that the heat transfer fluid is kept above the minimum fill level, and this should be checked before every run on the machine. It is also helpful to periodically clean the interior of the incubation chamber by wiping the tray to remove dust created by continuous shaking of the Honeycomb plates. The bulb will also need to be replaced once or twice a year. An F1.b2 error message indicates insufficient light from the bulb. It is a good idea to keep several spare bulbs on hand.

The identification of mutants and chemicals that alter life span in simple eukaryotes has been a driving force in aging research over the past several years. Of particular interest are those interventions that slow aging across evolutionarily divergent species. The chronological life span methodology described here has contributed to our understanding of basic mechanisms of aging in the budding yeast and the identification of novel longevity factors which may ultimately prove useful as therapeutic targets for treating age-associated diseases in people.