We have developed a decellularized lung extracellular matrix and novel biomimetic bioreactor that can be used to generate functional lung tissue. By seeding cells into the matrix and culturing in the bioreactor, we generate tissue that demonstrates effective gas exchange when transplanted in vivo for short periods of time.

Lung tissue, including lung cancer and chronic lung diseases such as chronic obstructive pulmonary disease, cumulatively account for some 280,000 deaths annually; chronic obstructive pulmonary disease is currently the fourth leading cause of death in the United States1. Contributing to this mortality is the fact that lungs do not generally repair or regenerate beyond the microscopic, cellular level. Therefore, lung tissue that is damaged by degeneration or infection, or lung tissue that is surgically resected is not functionally replaced in vivo. To explore whether lung tissue can be generated in vitro, we treated lungs from adult rats using a procedure that removes cellular components to produce an acellular lung extracellular matrix scaffold. This scaffold retains the hierarchical branching structures of airways and vasculature, as well as a largely intact basement membrane, which comprises collagen IV, laminin, and fibronectin. The scaffold is mounted in a bioreactor designed to mimic critical aspects of lung physiology, such as negative pressure ventilation and pulsatile vascular perfusion. By culturing pulmonary epithelium and vascular endothelium within the bioreactor-mounted scaffold, we are able to generate lung tissue that is phenotypically comparable to native lung tissue and that is able to participate in gas exchange for short time intervals (45-120 minutes). These results are encouraging, and suggest that repopulation of lung matrix is a viable strategy for lung regeneration. This possibility presents an opportunity not only to work toward increasing the supply of lung tissue for transplantation, but also to study respiratory cell and molecular biology in vitro for longer time periods and in a more accurate microenvironment than has previously been possible.

Detailed figure(s) of the bioreactor design and assembly for both decellularization and culture are provided in Figures 1 and 2, respectively. All components must be sterilized prior to assembly of the bioreactor. The following specific points are noted:

Perfuse with decellularization solution until 500ml of solution has perfused through the lung. Optimal pressure is <15 mmHg (~20 cm H2O). This typically will require 2.5 hours. Flow rates are typically very slow (0.2-0.5ml/minute) initially, and rapidly increase during the second hour to approximately 1ml/minute or greater. Periodically, remove used decellularization fluid from bioreactor, ensuring enough fluid remains to support the lung and tracheal cannula.

Although the details of perfusion and ventilation will vary based on experimental design, the following points are noted:

When the protocol is performed correctly, the freshly extracted lungs should hold air without leaking. Inflating them with air while submerged in liquid can check this - there should not be any bubbles indicating air leaks. The subsequent decellularization should allow ~500ml of decellularization fluid to flow through the lungs over the course of 2.5 - 3 hours at 37°C, and PBS should ultimately be able to flow through the lungs at about 10 ml/min (under ~15 mm Hg of hydrostatic pressure) at the end of rinsing. After treatment with 0.1% peracetic acid and benzonase, lungs can be stored at 4°C for up to 3 months, and still remain suitable for recellularization.

The final decellularized extracellular matrix should be completely devoid of cellular materials, and retain the gross, microscopic and ultrastructural characteristics of native lung. Insufficient decellularization or rinsing may result in remnant DNA "sticking" to the scaffold, which can be visualized with a standard hematoxylin and eosin stain (see Figure 3 for comparison).

Repopulation of acellular matrix and culture of lung tissue

If cells are freshly isolated from 7 day old neonatal rat pups, as described in the online supplement accompanying the work by Petersen and colleagues4, one can expect a cell yield of 120-150 millions cells per litter of 10 pups (just over 10 million cells per neonate).

Optimal conditions for cell seeding and subsequent culture of the lung in the bioreactor should yield well-distributed cells within all 5 lobes of the lung, and should provide coverage of approximately 70% of the extracellular matrix scaffold (Figure 3). The cultured cell population will be positive for key respiratory cell markers such as pro-secretory protein-C (SPC), Clara cell secretory protein (CCSP), and aquaporin-5 (AQP), in order of relative abundance (Figure 4). 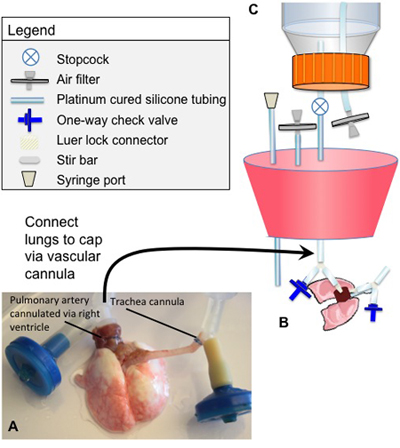 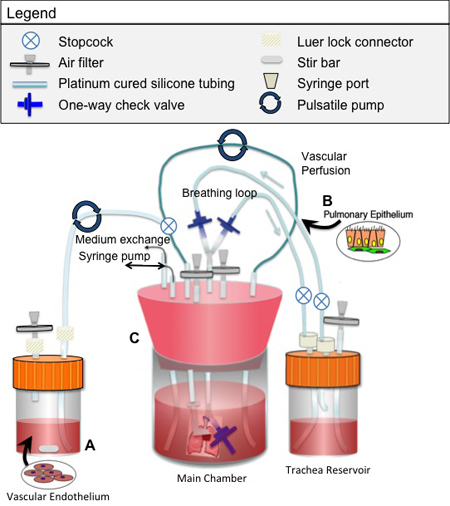 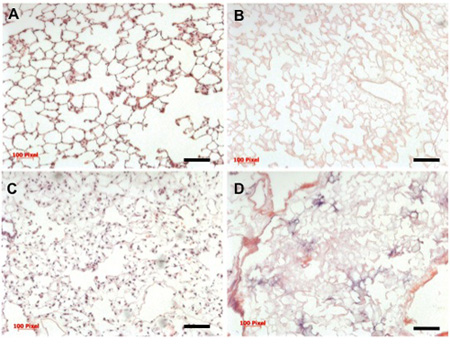 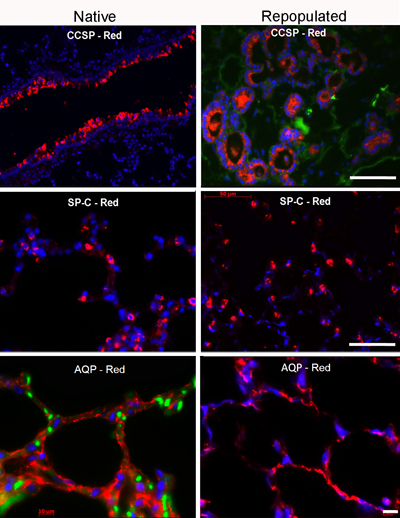 The most critical aspects of the system presented here include maintenance of sterility, and close monitoring of pressures applied to the vascular bed throughout the process of preparing and seeding the scaffold and culturing the repopulated lung. Sterility is best maintained by autoclaving all materials prior to use, and by mounting the lung in a closed system shortly after explant and avoiding subsequent breach of this barrier. After the decellularized matrix has been thoroughly rinsed and transferred to a sterile bioreactor for culture, the silicone cap and other seals and connections should not be disturbed or removed. To keep pressures in check, flow driven by gravity is preferable whenever possible. When a pump is required for recirculation of fluid, beginning after rinsing with PBS and continuing during culture, we recommend directly measuring the pressure just before the fluid enters the pulmonary artery with a pressure transducer. The magnitude of the applied pressure should not exceed 15 mm Hg.

Recellularized lungs can be cultured for varying time periods, typically ranging from 4 days to up to 3 weeks. Vascular perfusion is typically accomplished at 1-3 ml/min during endothelial culture, while ventilation is typically applied at a rate of 1 breath/min during epithelial culture. During combined culture periods, simultaneous ventilation and perfusion is appropriate. Ventilation can be performed with either liquid medium or air.

Over the course of the last several decades, several groups have done important tissue engineering work showing the feasibility of differentiating lung epithelium in vitro and of replicating several aspects of lung microanatomy7,8,9,10. However, until recently,4,5 none of these attempts to engineer lung tissue had resulted in an implantable organ that was able to maintain separation between the blood and airway compartments and that could participate in gas exchange. Therefore, though the methods described are only an initial step toward the long-term goal of generating functional lung tissue, this work is an encouraging step toward the possibility of increasing the amount of lung tissue available for transplant. Moreover, this work elaborates work done by Ott et al. and Uygun and colleagues11,12, demonstrating the efficacy of a decellularized extracellular matrix as a scaffold for tissue engineering complex three-dimensional structures and supporting the growth and survival of various types of cells. This work is also significant for its contribution to the armamentarium of respiratory cell and molecular biologists. By providing a unique, three-dimensional environment that can also provide appropriate mechanical stimuli, and that does not share the attendant hazard of rapid de-differentiation that one might encounter when culturing rodent epithelium in the laboratory with more traditional methods13,scientists could use our system to gain new insight into cell-cell and cell-matrix interactions that play a role in cell differentiation and function. This knowledge may be particularly powerful if used as leverage to guide the fate of various stem cell populations, as Cortiella's group has demonstrated in initial studies14.

L.E.N. holds stock in Humacyte, a regenerative medicine company. Humacyte did not fund these studies, and did not affect the design, interpretation, or reporting of any of the experiments or methods described. The authors (L.E.N., T.H.P., E.A.C.) and Yale University have filed a patent application related to tissue engineering of lungs.

We thank Maegan B. Colehour for help with bioreactor development. These studies were funded by Yale University Department of Anesthesia and by NIH grant HL 098220 (to L.E.N.). T.H.P. was supported by NIH T32 GM007171.