Drosophila melanogaster is a genetically and behaviorally tractable model system that has been used to understand the molecular and cellular basis of many important biological processes for over a century 1. Drosophila has been well exploited to gain insights into the genetic basis of fly behavior.

Drosophila melanogaster, the fruit fly, has been used to study molecular mechanisms of a wide range of human diseases such as cancer, cardiovascular disease and various neurological diseases1. We have optimized simple and robust behavioral assays for determining larval locomotion, adult climbing ability (RING assay), and courtship behaviors of Drosophila. These behavioral assays are widely applicable for studying the role of genetic and environmental factors on fly behavior. Larval crawling ability can be reliably used for determining early stage changes in the crawling abilities of Drosophila larvae and also for examining effect of drugs or human disease genes (in transgenic flies) on their locomotion. The larval crawling assay becomes more applicable if expression or abolition of a gene causes lethality in pupal or adult stages, as these flies do not survive to adulthood where they otherwise could be assessed. This basic assay can also be used in conjunction with bright light or stress to examine additional behavioral responses in Drosophila larvae. Courtship behavior has been widely used to investigate genetic basis of sexual behavior, and can also be used to examine activity and coordination, as well as learning and memory. Drosophila courtship behavior involves the exchange of various sensory stimuli including visual, auditory, and chemosensory signals between males and females that lead to a complex series of well characterized motor behaviors culminating in successful copulation. Traditional adult climbing assays (negative geotaxis) are tedious, labor intensive, and time consuming, with significant variation between different trials2-4. The rapid iterative negative geotaxis (RING) assay5 has many advantages over more widely employed protocols, providing a reproducible, sensitive, and high throughput approach to quantify adult locomotor and negative geotaxis behaviors. In the RING assay, several genotypes or drug treatments can be tested simultaneously using large number of animals, with the high-throughput approach making it more amenable for screening experiments.

2. To treat larvae with drug

This assay was originally described by Gargano et al5.

Normal wild type larva will wander ~3 cm/minute, and exhibit ~40-50 body wall contractions in one minute. We have recently developed a Drosophila model of FUS/TLS-related amyotrophic lateral sclerosis that shows larval crawling defect, reduced life span and adult climbing impairment6. We targeted expression of wild type and mutant forms of FUS/TLS to the motor neurons (OK-371-gal4 driver) and performed a larval crawling assay. As shown below, wild type larvae crawl up to 12 cm, whereas expression of wild type FUS decreased the larval crawling ability to approximately 6 cm. Animals expressing the ALS-causing mutation R521C in FUS/TLS demonstrate a very severe impairment in their crawling movement (Figure 1), crawling only about 1 cm/minute.

Young wild-type adult flies should have an average climbing height of ~4-5 cm in a 3-second time period (the time can be adjusted from 3 seconds to accommodate different strains or activity levels to define a given average height for a given strain/treatment). Flies that remain at the bottom are assigned a value of 0. It is not advised to use more than 25 flies per vial because it then becomes difficult to determine the location of each individual fly to measure height. No desensitization has been observed at up to the 6 consecutive trials spaced 1 minute apart that we have employed. It is critical NOT to reuse the polystyrene testing vials in this assay after the initial sets of data are gathered because new flies placed into used vials will not climb to the same extent as in fresh vials. 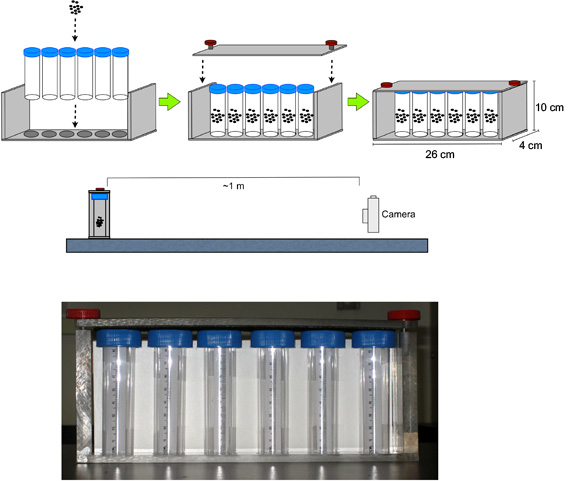 Figure 1. Setup for the RING Assay. The digital camera is placed ~1 m in front of the apparatus containing flies in the polystyrene vials; focus and zoom the camera onto the apparatus; and set a timer to 3.0 seconds. 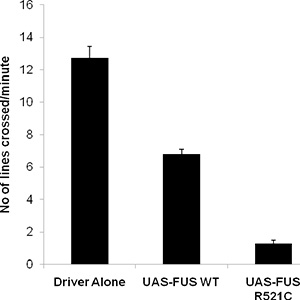 Drosophila behavior is tightly regulated by genetic and environmental factors. We, and others, have previously used the assays described here to gather data to examine genes related to fly behaviors and to human neurodegenerative diseases modeled in Drosophila5-19. For the crawling assay, careful selection of 3rd instar larvae is a critical step. If treating with a drug, it will take 10-15 minutes (or more depending on the type and nature of the drug) to achieve maximal effect if it has good solubility. Therefore, we routinely feed flies the drug for 15 minutes, and then wait an additional 15 minutes before testing. It is important, however, to keep drug concentrations in solution, and exposure times, between treatment groups the same for accurate comparison. CNS active drugs will usually have a maximal effect lasting ~45 minutes. The larvae should be washed well after selection (or dug feeding) to remove the fly food and allowed acclimatized for 1 minute before starting the crawling assay. The agar plate should be kept at room temperature (~22° C) for an hour, as low temperature can influence larval crawling ability. Although the larval crawling assay can provide important information regarding activity levels, it is not suitable for analysis of subtle coordination deficits. Therefore, as a screening platform it is most appropriate for a first pass examining gross activity deficits.

An adult behavior that involves fine motor coordination is courtship and mating. This behavior has been used to examine aspects of behaviors relevant to human diseases, and involves sensory processing (olfactory, visual, acoustic) in addition to fine motor control18. When a male notices a female, he initiates the courtship ritual that progresses in a stereotype pattern beginning with orientation behavior (turning toward and chasing the female). This is followed by wingsong, licking and tapping of the female genetalia, curling of the abdomen towards the female, and culminates in copulation, which can last several tens of minutes20-22. Because many of the aspects of courtship involve visual cues, dark conditions lead to a degradation of mating performance, and assays should be performed with enough light so that flies can see one another. Accordingly, white-eyed flies usually have extremely poor performance in our described assay and readers are advised against planning experiments utilizing them with this protocol. If treating the flies with a drug, put the drug into the medium the flies are isolated on (e.g. 1% agarose + 10% sucrose + drug instead of standard food when treating with drug to avoid any possible degradation of the drug by microorganisms in the food). Generally the flies are isolated into 5 ml test tubes that have 300-500 ml of food in them, plugged with cotton. Do NOT anesthetize the flies for transfer to the mating wheel. It is absolutely CRITICAL to wash the mating wheel very well between uses to remove any residual pheromones (warm water with small amount of alconox soap over night with shaking, then washed for a minimum 48 hours in deionized water with shaking, and numerous changes of water). Another consideration when performing the assay we describe is the weather. In our experience flies will not court if it is raining or looks like it will rain. They perform best on bright sunny days, regardless if the laboratory has windows or not. Our current theory is that this phenomenon is related to atmospheric pressure, but we have not investigated this.

The traditional negative geotaxis assay relies on measuring how many flies climb above a predetermined height in 10 seconds (described in http://www.jove.com/details.php?id=2504). We believe that the RING assay has certain advantages over the traditional assay. One is throughput, as six independent replicates can be measured simultaneously compared to the one of the standard assay, and the system is generally scalable. Another is sensitivity, because the average height climbed in a defined time period is quantified, rather than a pass/fail number for absolute height. Using this approach, more subtle deficits may be observed. Because of the level of throughput, the assay is more suited to screens than the more tedious traditional negative geotaxis assay. Further, Garagano et al. (2005) describe a computerized scoring method that if employed would further increase throughput. Primary considerations for this assay are that it is imperative that the flies are not anesthetized before testing, and that fresh vials are used after a given set of trials before a new batch of flies are tested.

We would like to thank Astha Maltare for generating the larval crawling data. We would like to thank Dr. Nicholas Lanson Jr. for giving his comments on the manuscript. This work was supported by the Robert Packard Center for ALS at Johns Hopkins (to UBP) and the Amyotrophic Lateral Sclerosis Association (UBP); and R01MH083689 from the National Institutes of Mental Health (CDN).