Amblyopia is a developmental disorder of the visual cortex that is often accompanied by strong suppression of one eye. We present a new technique for measuring and treating interocular suppression in patients with amblyopia that can be deployed using virtual reality goggles or a portable iPod Touch device.

Amblyopia, a developmental disorder of the visual cortex, is one of the leading causes of visual dysfunction in the working age population. Current estimates put the prevalence of amblyopia at approximately 1-3%1-3, the majority of cases being monocular2. Amblyopia is most frequently caused by ocular misalignment (strabismus), blur induced by unequal refractive error (anisometropia), and in some cases by form deprivation.

Although amblyopia is initially caused by abnormal visual input in infancy, once established, the visual deficit often remains when normal visual input has been restored using surgery and/or refractive correction. This is because amblyopia is the result of abnormal visual cortex development rather than a problem with the amblyopic eye itself4,5 . Amblyopia is characterized by both monocular and binocular deficits6,7 which include impaired visual acuity and poor or absent stereopsis respectively. The visual dysfunction in amblyopia is often associated with a strong suppression of the inputs from the amblyopic eye under binocular viewing conditions8. Recent work has indicated that suppression may play a central role in both the monocular and binocular deficits associated with amblyopia9,10 .

Current clinical tests for suppression tend to verify the presence or absence of suppression rather than giving a quantitative measurement of the degree of suppression. Here we describe a technique for measuring amblyopic suppression with a compact, portable device11,12 . The device consists of a laptop computer connected to a pair of virtual reality goggles. The novelty of the technique lies in the way we present visual stimuli to measure suppression. Stimuli are shown to the amblyopic eye at high contrast while the contrast of the stimuli shown to the non-amblyopic eye are varied. Patients perform a simple signal/noise task that allows for a precise measurement of the strength of excitatory binocular interactions. The contrast offset at which neither eye has a performance advantage is a measure of the "balance point" and is a direct measure of suppression. This technique has been validated psychophysically both in control13,14 and patient6,9,11 populations.

In addition to measuring suppression this technique also forms the basis of a novel form of treatment to decrease suppression over time and improve binocular and often monocular function in adult patients with amblyopia12,15,16 . This new treatment approach can be deployed either on the goggle system described above or on a specially modified iPod touch device15.

1. The Measurement of Suppression

The level of suppression found in the described method is dependent on the underlying cause of the amblyopia, previous treatment, use of refractive correction and visual acuity. Because each patient has a very unique history, it is difficult to define 'normal' values of suppression or make comparisons between people. Generally we expect those with worse visual acuity to have a deeper level of suppression9. During training, as we reduce the contrast imbalance between the eyes, the depth of suppression typically reduces and this improves a range of binocular and monocular functions. This change in suppression has been demonstrated in several patient populations (see Figures 3 and 4 in reference12, Table 3 and Figure 9 in reference 15 and Figure 2 in reference 16). It is important to note that detailed measurements of suppression using this technique have the potential to enhance our understanding of the amblyopia syndrome. 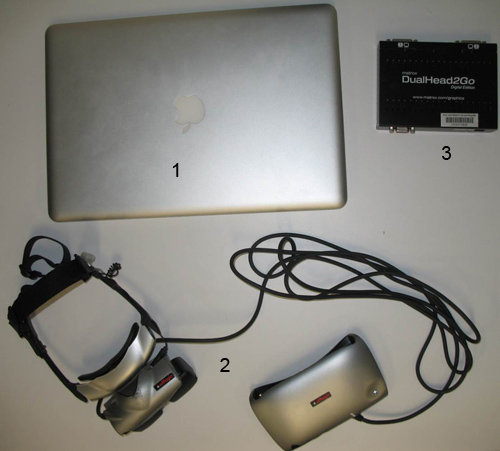 Figure 2. The goggles fitted correctly on a study participant. 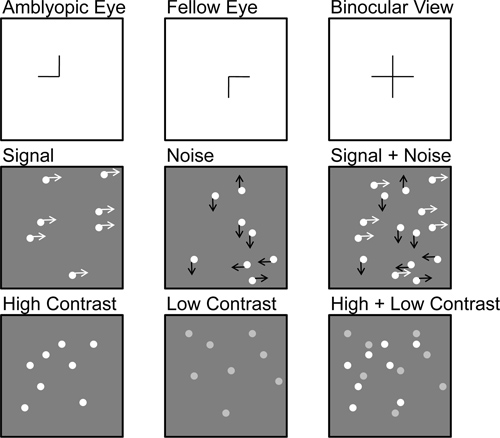 Figure 3. An overview of the random dot kinetogram stimuli (Step 1.2/1.3). The top panel demonstrates the alignment phase where a half cross is displayed to each eye monocularly as a cue for binocular alignment. The middle panel demonstrates the signal to noise paradigm where signal dots are presented to the amblyopic eye only and the noise dots are presented to the fellow eye, under binocular conditions the signal and noise are combined to give a motion coherence threshold which is then utilized in the contrast varying stage of the measurement. The bottom panel demonstrates the contrast threshold, this procedure uses the motion coherence threshold at a fixed level of signal to noise, and displays varying contrast levels between the two eyes. The point at which the two eyes see a balanced binocular input is the contrast threshold or "balance point".

Figure 4. (Step 1.7) Alignment screens as seen through the goggles, horizontal and vertical arrow keys are used to align targets until an entire cross is seen. 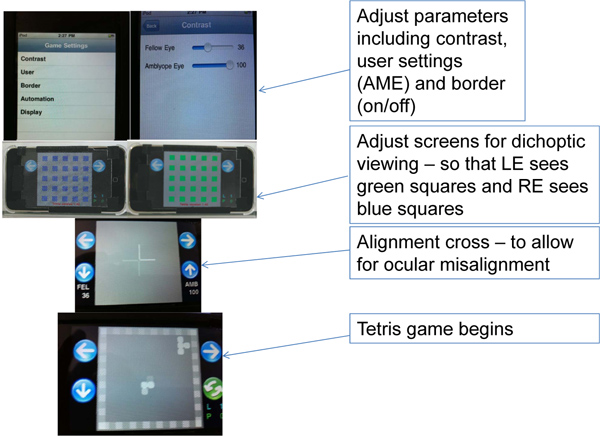 Figure 5. An overview of the training protocol. 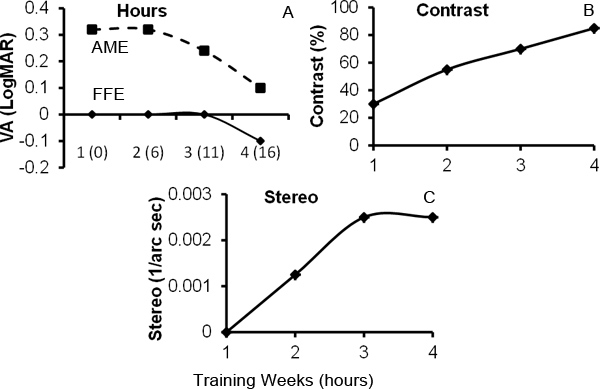 Figure 6. Example of clinical and psychophysical data obtained from one adult participant with strabismic amblyopia who completed the training procedure (steps 2.1 to 2.4). Figure 6A demonstrates the change in visual acuity (measured with a logarithmic style chart in logMAR units over four weeks of training for both the amblyopic eye (AME) and fellow eye (FFE)). Smaller LogMAR values indicate better visual acuity. The cumulative number of hours of game play is shown in brackets on the x-axis. Figure 6B demonstrates the change in contrast imbalance over four weeks of training. The y-axis shows the contrast that could be tolerated in the fellow eye, therefore larger values indicate less suppression. At the start of training only 30% contrast could be tolerated in the fellow eye before the amblyopic eye was suppressed. However as training progressed, more contrast could be tolerated indicating a reduction in suppression. Figure 6C shows the improvement in stereoacuity over the training period (measured with the Randot stereo test). Zero on the y-axis indicates no stereo vision and increasing values indicate improving stereo sensitivity (units are the reciprocal of the stereo threshold in seconds of arc). 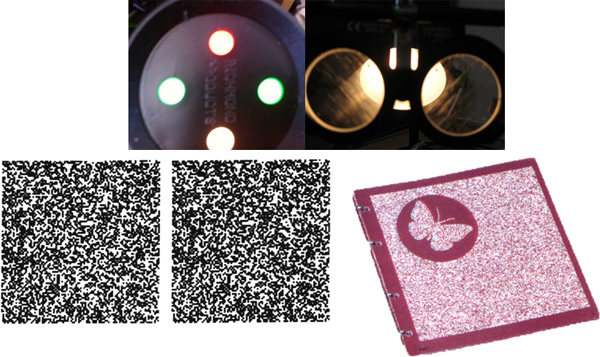 The suppression measurement and treatment techniques described in this paper critically depend on manipulation of the contrast of the images seen by each eye. Specifically, the relative interocular contrast imbalance at which binocular combination occurs, i.e. the "balance point contrast", provides a measure of suppression6,11,17 . In addition, by repeatedly exposing patients with amblyopia and suppression to "balanced" visual stimuli, it is possible to reduce suppression and potentially improve both monocular and binocular visual function12,15,16 . These techniques represent an advance in suppression measurement and a new approach to amblyopia treatment respectively. Currently available clinical tests for assessing suppression such as the Worth 4 lights test and the Bagolini striated lenses assess whether suppression is present or absent, and other tests such as the sbisa bar quantify the level of suppression by the use of neutral density filters. Our technique provides additional clinical information by allowing for the strength of suppression to be precisely quantified. Amblyopia, which is often associated with suppression, is generally treated by occluding the non-amblyopic eye or degrading the image in the non-amblyopic eye in order to encourage use of the amblyopic eye18. While this technique is effective in improving amblyopic eye function18, it does not directly address the binocular deficits associated with amblyopia. Our technique directly targets binocular visual function and we have found that this approach can improve both monocular and binocular function in adult patients with amblyopia12,15,16. The measurement and treatment approaches described are suitable for use in adults and children, although the games may need to be adapted for use in younger pediatric populations. We are currently developing additional games for this purpose.

Our techniques do have limitations. Some patients with a strabismus and strong suppression find it challenging to align the images shown to each eye at the start of the suppression measurement protocol. While it is possible for such patients to align the images17, this can be time consuming. With regards to treatment it is important to work alongside a suitably qualified clinician throughout the training regime, and to consider the risk of diplopia (double vision) if suppression is reduced. Our prior work on this treatment approach has focused on patients with anisometropia or small-angle strabismus and no patients have developed diplopia, however the risk of diplopia should be carefully considered by a suitably qualified clinician on a patient by patient basis before the treatment is administered.

When setting up the techniques for the first time it is important to ensure that all hardware connections are secure and that all relevant drivers are installed and updated on the host computer. It is also important to use a computer equipped with a graphics card that is compatible with the Matrox graphics board described in the protocol and that supports a screen resolution of 1600x600 (once the Matrox drivers are installed) to ensure that each goggle screen has a distinct image. We have found that most problems encountered when setting up the system occur due to incorrect screen resolution settings and the absence of up to date drivers for the necessary hardware. It is also important to ensure that both goggle screens have equal luminance prior to measuring suppression to ensure accurate and stable measurements.

The techniques described provide a foundation for further development of suppression measurement and treatment approaches. In particular, the development of more engaging video games based on the core principle of varying contrast between the eyes could make this approach more efficient and more appealing to younger patients. Aside from their clinical use, these techniques can also be used in a research setting to explore the neural mechanisms underlying suppression and the role that inhibitory interactions between the eyes play in the normal visual system13.

The techniques described in this manuscript form the basis of two patents held by BT and RFH, one of which is also held by JC and LT.