Frailty syndrome is commonly seen in the aged and reflects multi-system physiological change. However, with reduced functional reserve and resilience frailty is also known to be common in the HIV infected population. This study outlined an easily administered screening test to identify HIV patients with frailty. When significant components of frailty are identified, clinicians will be able to focus on amelioration of the problem and promote reversion to the pre-frail state.

A simple, validated protocol consisting of a battery of tests is available to identify elderly patients with frailty syndrome. This syndrome of decreased reserve and resistance to stressors increases in incidence with increasing age. In the elderly, frailty may pursue a step-wise loss of function from non-frail to pre-frail to frail. We studied frailty in HIV-infected patients and found that ~20% are frail using the Fried phenotype using stringent criteria developed for the elderly1,2. In HIV infection the syndrome occurs at a younger age.

HIV patients were checked for 1) unintentional weight loss; 2) slowness as determined by walking speed; 3) weakness as measured by a grip dynamometer; 4) exhaustion by responses to a depression scale; and 5) low physical activity was determined by assessing kilocalories expended in a week's time. Pre-frailty was present with any two of five criteria and frailty was present if any three of the five criteria were abnormal.

The tests take approximately 10-15 min to complete and they can be performed by medical assistants during routine clinic visits. Test results are scored by referring to standard tables. Understanding which of the five components contribute to frailty in an individual patient can allow the clinician to address relevant underlying problems, many of which are not evident in routine HIV clinic visits.

The Centers for Disease Control projects that more than half of HIV-1 infected individuals in the United States will be over the age 50 by the year 2015. The increasing life expectancy of HIV-1 infected patients has resulted in an unexpected increase in aging-related co-morbidities, placing HIV-positive elders at increased risk of morbidity and mortality. One important example of this is with the newly described syndrome of frailty, which may play an important role in accelerated aging of HIV-1 infected adults.3-7

Frailty has been defined in the aged as a biologic syndrome of decreased reserve and resistance to stressors, resulting from the cumulative decline of physiologic systems and often progresses in a step-wise functional decline over time. The clinical importance of frailty is that the syndrome is considered a high-risk state, predictive of adverse health outcomes such as decreased function and mobility, hospitalization and death.8 Numerous studies in the last 10 years have tried to assess frailty in different populations. Fried et al. studied frailty in men and women older than 65 years of age who were enrolled in a cardiovascular study.2 Their definition of frailty was validated in a study of aging women.9 Modifications of their definition have been used in other studies including HIV-1 infected individuals.4-7 Fried et al. described a frail phenotype that even in the absence of disabilities or co-morbidities showed that 7% of population older than 65 years of age are frail whereas, 20-26% older than 80 years of age were frail.2 Frailty can be a primary finding, but also a secondary diagnosis as a result of an acute event or co-morbidity like malignancy, atherosclerosis, infection (HIV), or depression.10 Additionally, other factors likely contribute to frailty in HIV patients, for example, intravenous drug abuse, indigence and mental illness.

Clinical measurement of frailty in HIV-1 infected patients is important as frailty may be reversible in its early stages (e.g. interventions to reverse deconditioning, protein-energy malnutrition, depression, vitamin D deficiency and other frailty related conditions) before depleted reserves reach a critical threshold leading to irreversible vulnerability and functional decline.

Because it is impractical to test for frailty in all patients attending an HIV clinic we recommend the following patients be assessed for the presence of frailty: patients entering care with a CD4 cell count <200, patients complaining of unintentional weight loss, severe neuropathy or patients who are not compliant with HIV therapy.

One hundred outpatient HIV-1-infected persons were prospectively tested for clinical markers of frailty to include shrinking weight, slowness in walking, decrease in grip strength, low activity, and exhaustion. Eighty-one patients were not frail when studied, 19 patients were frail at the initial assessment (Table 1). The characteristics of the frail and non-frail patients were not significantly different except for a higher rate of hepatitis C and neuropathy in the frail group (p < 0.05). Length of infection with HIV, CD4 count and HIV-1 RNA viral load were also compared. As shown in Table 2 the younger patients had a greater incidence of frailty and this was associated with low CD4 cell counts. CD4 counts <200 cells/mm3 were associated with 9-fold increased odds of frailty relative to patients with a CD4 count >350 cells/mm3 (odds ratio [OR] 9.0, 95% confidence interval [CI] 2.1-44). Seven frail patients were measured 6 months later: 2 died refusing therapy, 4 were no longer frail, and 1 patient remained frail (Table 3). From this data it appears that when patients took prescribed anti-retroviral therapy the CD4 cell counts improved along with an improvement in the general state of health of the patient. Finally, if the incidence of frailty in the study population is compared to the number of years of anti-retroviral therapy taken by the patients, the longer patients took anti-retroviral therapy, the less the incidence of frailty (p < 0.05). This fact supports the early use of anti-retroviral therapy in HIV-infected patients which is the preferred approach in recent HIV treatment guidelines.15

We conclude that frailty is common in HIV outpatients and is associated with low CD4 counts more than with advancing age. Our data suggest that frailty is transient, especially in younger patients who may revert to their prefrail state unlike uninfected elderly individuals in whom a stepwise decline in function may occur.

Representative Results from our Previous Study1

Table 1. Clinical characteristics of the HIV study patients. Frail patients were compared to non-frail HIV patients with respect to sex, age and comorbidities. The presence of neuropathy and infection with hepatitis C were significant differences between the frail and non-frail patients. 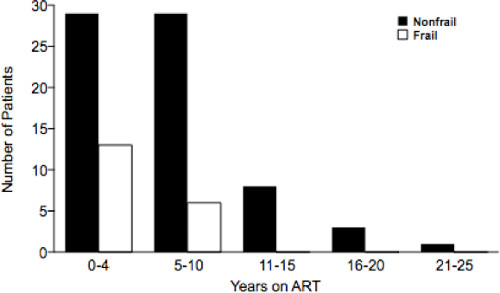 Previous studies of HIV and frailty: Two retrospective studies by Desquilbet et al. assessed frailty in a cohort of men who have sex with men from the Multicenter AIDS Cohort Studies (MACS). Both studies used a shortened definition of frailty containing fewer criteria than did our study. The first study compared frailty in HIV-1 infected men in the pre-treatment era to a control group of HIV uninfected men.4 There were similar rates of frailty in HIV+ men older than 55 years and HIV- men older than 65 years; frailty was found to occur earlier in HIV-1 infected men. Our study had similar findings of an earlier occurrence of frailty phenotype, but we obtained higher rates of frailty compared with MACS, possibly because our use of the full Fried frailty criteria versus surrogate administrative data, but also because of the different population of patients in our study.

Another study by Desquilbet et al. evaluated CD4 cell count and HIV viral load as predictors of frailty in HIV+ men and found that lower CD4 cell counts and viral loads of more than 50,000 copies of RNA were significantly associated with frailty.5 Also the prevalence of frailty declined in the era of ART. Despite differences in measuring frailty and in population characteristics our study concluded like Desquilbet et al. that a low CD4 cell count is significantly associated with frailty and that patients on long-term ART have less likelihood of developing frailty.1 Premature occurrence of prevalence of frailty, shorter duration of ART, more co-morbidities and lower CD4 count were associated with frailty in both studies, but we did not find a strong association between psychiatric diagnosis and frailty. We found a positive relationship between length of ART and not being frail (Figure 1).

Our findings of frailty in HIV patients: Our initial hypothesis that age was not significantly important when measuring frailty of patients with low CD4 cell counts was confirmed. Frailty is likely more causally related to the inflammatory state and profound immunosuppression found in many patients with low CD4 cell counts. Many of these patients had a history of recently treated opportunistic infections. Because of these observations we propose that an active diagnosis of AIDS (CD4 cell count <200 cells/μl) is a significant co-morbidity itself and significantly predisposes patients to being frail. All of our frail patients had at least one co-morbidity besides HIV itself. Our frail patients <50 years had significantly fewer co-morbidities than the frail population >50 years, though in comparison, the younger people had a lower CD4 cell count.

Our other hypothesis was that frailty may be temporary in younger patients with low CD4 cell counts and may revert when CD4 cell counts improve. We were limited by the low number of patients and this hypothesis could not be proven, but it was a likelyexplanation for the small number of patients in which reversal was demonstrated (Table 1). Longer antiretroviral treatment was found to be protective for frailty (Figure 1). This fact on its own would support the recommendations of starting ART at higher CD4 counts and continuing ART without any treatment breaks. We believe that the main reason by which length of ART treatment was shown to be protective for frailty is that patients on long term treatment are more likely to have better control of co-morbidities as well as HIV and less likely to be frail.

In conclusion we have observed an association between low CD4-cell counts and frailty, which is not affected by age, viral load or the presence of co-morbidities. Effective treatment with ART plays a protective role against frailty, reinforcing the importance of effective ART. Early implementation of ART in the care of HIV patients may protect against frailty. Though not tested in our study, future research should address other interventions known to reverse frailty in the aged including treating deconditioning, protein-energy malnutrition, depression, and vitamin D deficiency.