This is a sample clip. If you're new to JoVE sign up and start your free trial today to watch the full video! If your institution has an existing subscription, log in or sign up to access this video.
Behavior

We present a protocol to dissociate the intertwining factors of integrative difficulty and unexpectedness in semantically anomalous sentences by applying multiple repetitions to enhance participant's expectancy for anomalous sentences. The dissociation helps to investigate the major contributor of elicited event-related potentials (ERP) effects such as N400 in language studies.

Anomalous sentences are widely used by linguists to study online cognitive processing of normal languages. For example, in event-related potentials (ERP) studies, sentences with semantic anomalies (e.g., "He spread the warm bread with socks.") were reported to elicit an N400 effect1 (but also see some other studies reporting a semantic P600 effect2,3), while sentences with syntactic difficulties or anomalies (e.g., "The woman persuaded to answer the door…") were reported to elicit a P600 effect4,5. These electrophysiological components are widely used as reliable indicators for investigating the normal temporal courses of processing information from different aspects of language, such as syntax and semantics.

To ascertain whether it is expectancy or semantic integration difficulty that contributes to the elicited electrophysiological effect, we need to dissociate these two factors. Traditionally, expectancy is often measured by corpus frequency (in word studies) or cloze probability (in sentence studies). The widely applied method to manipulate expectancy in traditional experiments is by choosing stimuli with high and low scores in expectancy to form expected and unexpected groups. This method is effective in manipulating expectancy and has produced abundant insightful results.

To address this issue, we propose a new method to dynamically enhance participants' expectancy for anomalous sentences while trying to maintain the semantic integration difficulty. Specifically, we quickly familiarize participants with unfamiliar anomalous sentences and thus enhance their expectancy through multiple repetitions. Importantly, multiple repetitions do not change the stimulus itself; therefore, the semantically anomalous information itself remains unchanged (i.e., the critical word still cannot be successfully integrated into the context).

The present protocol was approved by the Institutional Review Board of Tsinghua University. 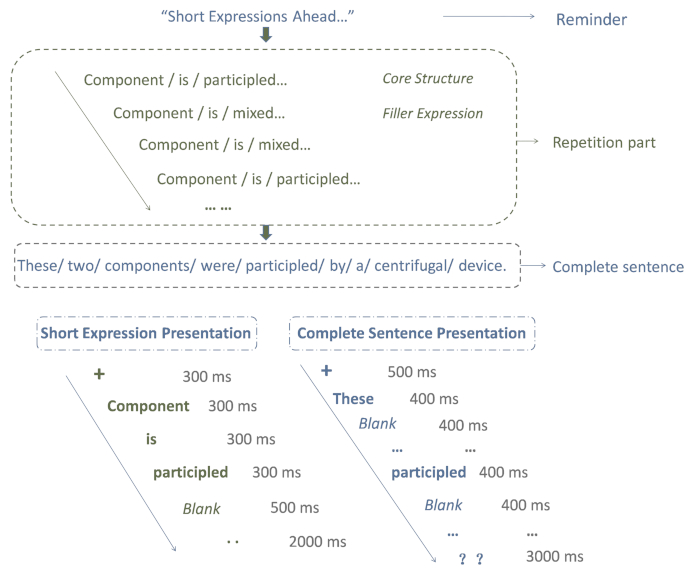 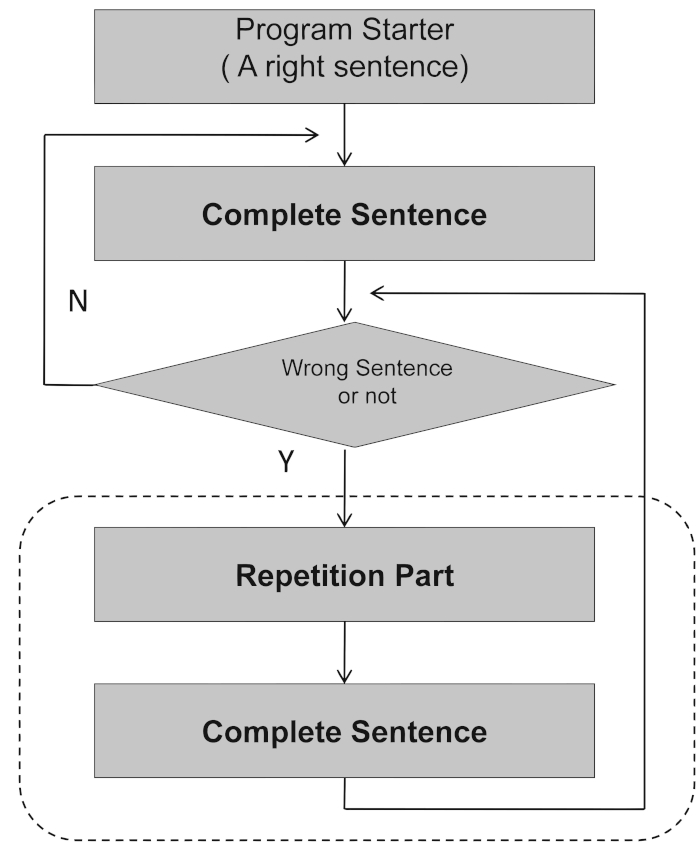 Figure 2: The organization of stimuli in each block. This figure displays the overall flowchart of programming for all anomalous complete sentences (with their corresponding repetition parts) and the correct, complete filler sentences (without any preceding repetition part) in each block. This figure is adopted from Huang et al.14 with permission. Please click here to view a larger version of this figure.

The present protocol was used in one of our recent studies to investigate whether the N400 effect reflects semantic integration processing14. The stimuli used in that study were in Chinese, as shown in Table 2.

The two hypotheses in that study were that (i) the N400 effect elicited by semantically anomalous information will be significantly attenuated by multiple repetitions at the first stage; and (ii) the follow-up reinitiated semantic integration difficulty (by the same repeated anomalous information) will cause recovery of the attenuated N400 effect. 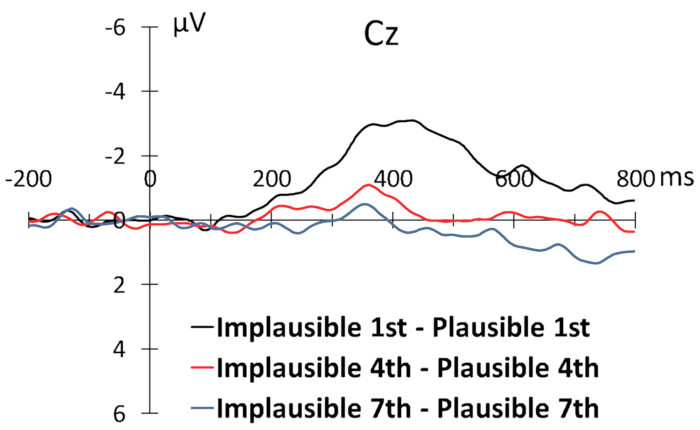 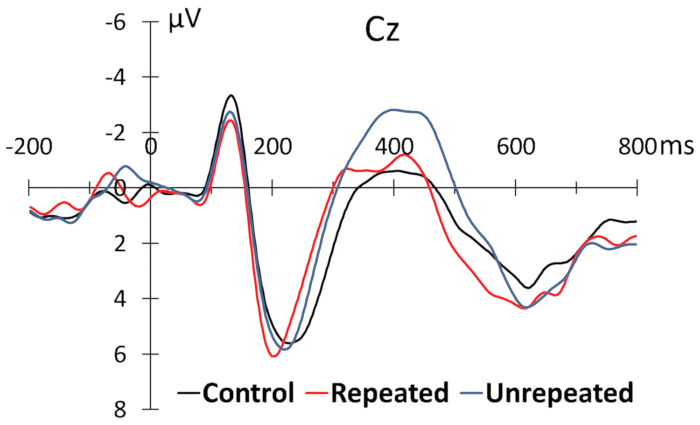 P600 effects in the complete sentence part
Besides the N400 effect in the repeated complete sentence group, further analysis revealed that a marginally significant P600 effect followed the N400 effect in the 500-800 ms time window between the repetition and control conditions across all the nine ROIs on the scalp (F(1, 21) = 3.266, p = 0.085), with the ERPs in the repetition condition more positive. If we consider only the central-posterior six ROIs, where the P600 effect often reaches its peak value, the P600 effect was significant, F(1, 21) = 8.112, p = 0.010.

Experimental results and significance
In the repetition part, the results demonstrated that the N400 effect became smaller and smaller until almost non-existent. The greatly attenuated N400 effect proved that multiple repetitions did significantly modulate the amplitude of N400. However, the results in this part cannot show whether N400 was actually affected by the change of expectancy or semantic integration. The attenuated N400 effect can still be explained differently. One explanation is that expectancy contributed to the attenuation of N400 in that multiple repetitions enhanced participants' expectancy for anomalous expressions. This would suggest that N400 indexes expectancy rather than semantic integration difficulty. Another explanation is that after getting familiarized with anomalous expressions, the brain realized that the words in the expressions simply could not be successfully integrated into a plausible message and therefore gave up further attempts to integrate the information. This explanation would suggest that N400 indexes semantic integration.

To evaluate the effectiveness of this protocol, we need first to examine whether participants' expectancy for anomalous sentences is enhanced by multiple repetitions. Many previous studies have proposed that the N400 amplitude is actually an inverse function of the expectedness or prediction of the input semantic information, i.e., the less the input semantic information is expected, the larger the N400 amplitude6,8. Accordingly, the greatly attenuated N400 amplitude after repetitions suggests that the expectancy has been greatly enhanced. The present experimental results corroborate these previous studies by demonstrating that the N400 effect was greatly attenuated by multiple repetitions. Following previous proposals, we maintain that the greatly attenuated N400 effect in the experiment indicates that participants' expectancy for anomalous sentences was significantly enhanced by multiple repetitions (see Figure 3).

The second concern is whether the follow-up, semantically enriched complete anomalous sentences can successfully reinitiate the semantic integration difficulty. Our experimental results demonstrate that a significant P600 effect followed the N400 effect in the 500-800 ms time window in the repetition condition (see Figure 4). As discussed above, the elicited P600 effect in the complete anomalous sentence, which reflects the later higher-level information processing, indicates that the follow-up, more informative sentences successfully reinitiated the semantic integration processing of the same anomalous information in the enriched sentential context. Additionally, since the repeated core structures share the same anomalous information as the follow-up complete sentences, this further suggests that the reinitiated semantic integration is (almost) as difficult in the complete anomalous sentences as before repetition (i.e., the critical word still cannot be integrated into the context to generate a successful message).

Taken together, the present method has proved to be effective in dynamically enhancing participants' expectancy for anomalous sentences while maintaining the semantic integration difficulty. Therefore, the present method is a useful way to dissociate the expectancy elicited effect and the integration elicited effect in processing of anomalous sentences.

Further explanations and possible other applications
The present protocol provides an effective dynamic method to dissociate the intertwining factors of unexpectedness and semantic integration difficulty in anomalous sentences by multiple repetitions. To achieve this goal and for considerations like time cost control, the protocol repeats only the core anomalous information, instead of the whole sentence. Therefore, the core anomalous structure construction process (step 1.2) is critical in this protocol. It should be noted that if unnecessary information is included in the core structure, it will increase the total time cost. Therefore, to save time and eliminate any unnecessary information (to lay a better foundation for subsequent integration initiation), the core anomalous structure should be as simplified as much as possible. On the other hand, all the necessary elements should be included to represent the anomalous information and to ensure the efficacy of multiple repetitions. It is useful to conduct a pre-test to examine whether the extracted core structure can elicit the same N400 effect as the complete anomalous sentence. Besides, minor modifications are recommended such that the extracted anomalous core structures used in repetitions differ in form and order from the core structures in the anomalous complete sentences, as indicated by step 1.2.3. Otherwise, participants might memorize a core structure as an entire unit, which will block the initiation of the semantic integration when new information is added.

There are no competing financial interests.

This work was supported by the National Natural Science Foundation of China [61433015], National Social Science Major Fund of China[14ZDB154; 15ZDB017], and the MOE (Ministry of Education in China) Project of Humanities and Social Sciences [14YJC740104]. We express great gratitude to the two anonymous reviewers for their valuable suggestions.