Surgical induction of ischemic brain damage in the rat is a widely used model for stroke research. Here we demonstrate the induction of focal cerebral ischemia by occlusion of the middle cerebral artery. Visualization of the resulting infarct by histological staining and magnetic resonance imaging is also shown.

Stroke is the leading cause of disability and the third leading cause of death in adults worldwide1. In human stroke, there exists a highly variable clinical state; in the development of animal models of focal ischemia, however, achieving reproducibility of experimentally induced infarct volume is essential. The rat is a widely used animal model for stroke due to its relatively low animal husbandry costs and to the similarity of its cranial circulation to that of humans2,3. In humans, the middle cerebral artery (MCA) is most commonly affected in stroke syndromes and multiple methods of MCA occlusion (MCAO) have been described to mimic this clinical syndrome in animal models. Because recanalization commonly occurs following an acute stroke in the human, reperfusion after a period of occlusion has been included in many of these models. In this video, we demonstrate the transient endovascular suture MCAO model in the spontaneously hypertensive rat (SHR). A filament with a silicon tip coating is placed intraluminally at the MCA origin for 60 minutes, followed by reperfusion. Note that the optimal occlusion period may vary in other rat strains, such as Wistar or Sprague-Dawley. Several behavioral indicators of stroke in the rat are shown. Focal ischemia is confirmed using T2-weighted magnetic resonance images and by staining brain sections with 2,3,5-triphenyltetrazolium chloride (TTC) 24 hours after MCAO.

Aseptic technique should be used for all survival surgical procedures. Disinfect the surgical work surface with commercial disinfectant and prepare sterile surgical packs of instruments, drapes, gauze, swabs, sutures, and scalpel blades by autoclaving. A surgical mask, hair bonnet and sterile gloves should be worn. A Germinator dry bead sterilizer is also used to resterilize surgical instruments between procedures if multiple rat surgeries will be done during one session. Prewarm a water-jacketed homeothermic blanket and place under an absorbent pad in order to prevent hypothermia of the rat during surgery. 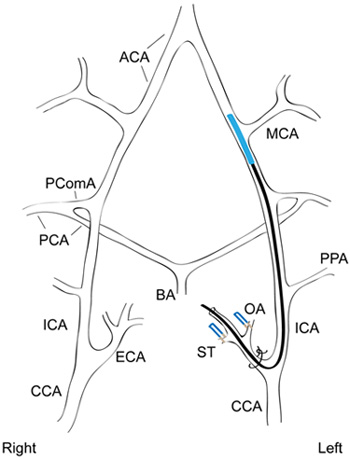 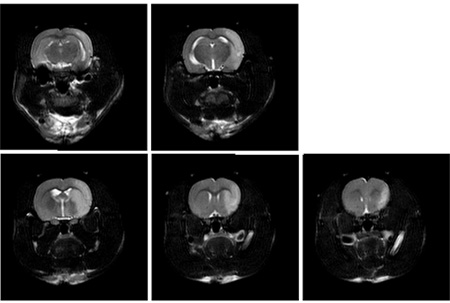 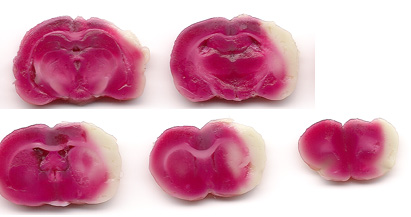 Figure 3. Representative coronal sections of rat brain stained with TTC 24 hours after 1 hour transient MCAO. TTC staining reveals white (unstained) infarcted regions of cerebral cortex and striatum in the same rat as that shown in Figure 2. Note that the general pattern of focal ischemic lesions is similar to that seen in the MRI T2-weighted images, although the final infarct area determined histologically may be slightly smaller than the T2 lesion.

Rodent models of cerebral ischemia can be classified as global or focal and as reversible or irreversible. We use a reversible focal ischemia model in order to mimic the reperfusion injury that can occur following recanalization in human stroke patients. While the rat shares the advantage of similar cranial circulation to the human, the extensive intracranial collateral circulation due to the Circle of Willis and leptomeningeal anastomoses results in inconsistent infarct volumes6. We use the spontaneously hypertensive rat (SHR) strain because infarct size is greater in SHRs exposed to focal cerebral ischemia compared to normotensive rats7-10. Stroke induction in SHRs is also more consistent and may generate less mortality than in other commonly used strains11. In addition, physiological parameters should be monitored throughout the surgery, because fluctuations can add to the variability in infarct volumes; these parameters include blood pressure, arterial O2 and CO2 levels, hypothermia, and hyperglycemia, which can exacerbate ischemic injury2,12. Hypothermia is of particular concern because it can lessen the degree of neuronal ischemic injury, and therefore, placing the rat on a thermoregulatory heating pad during surgery is essential.

We employ commercially prepared silicon-coated sutures in this procedure in an attempt to increase consistency in the infarct size13-15. Traditionally, intraluminal sutures used to occlude the MCA have been prepared by flame-rounding a 3-0 nylon suture tip or using a hot glue gun to coat the suture tip with a small glue bead16. These procedures produce sutures with varying tip diameters and thus, may require several attempts at occlusion before finding a suture that matches the vessel diameter of a given rat. Additional variations on the MCAO method described in this video include more distal occlusion, sparing the lenticulostriate branches in order to have a pure cortical infarct17, and simultaneous occlusion of the MCA and ipsilateral common carotid artery to reduce collateral blood flow6,9.

The functional effects of stroke can be assessed using a variety of behavioral tests, in which deficits in specific tasks are reflected in a simple scoring scale. For example, Bederson et al.18 developed a neurological score grading rats on the extent of forelimb flexion in an elevated body position, asymmetric resistance to a lateral push, and open field circling behavior. Rats extending both forelimbs to the floor when elevated and exhibiting no other deficits were graded "Normal (0)", whereas rats with contralateral forelimb flexion only were classified with "Moderate deficits (1)". "Severe grade 2" rats displayed decreased resistance on the contralateral side to a lateral force and "Severe grade 3" rats additionally engaged in circling behaviors. Lower grade behavioral deficits were always observed in the next higher grade (e.g., grade 2 and 3 animals also displayed forelimb flexion) and these scores were predictive of differences in infarct size18. Thus, such a simple scoring system allows for a rapid, consistent semi-quantitative assessment of the functional deficits from stroke.

Measurement of the extent of cerebral infarction is commonly accomplished by histological staining for tissue damage using TTC, cresyl violet (Nissl stain) or hematoxylin and eosin. Magnetic resonance imaging techniques, including diffusion-weighted MRI to visualize the infarct at early time points after occlusion, allow for the determination of an infarct volume in each individual rat without the need for harvesting tissue. This is especially valuable in studies aimed at determining the efficacy of a neuroprotective treatment following stroke; imaging the rat after MCAO but prior to treatment administration gives the investigator confidence that all experimental and control animals experienced similar strokes to start, reducing the confounding effects of variability in stroke induction.

The authors have no conflicting interests to disclose.
This protocol was approved by the Institutional Animal Care and Use Committee at University of Wisconsin-Madison School of Medicine and Public Health and abides by the National Institutes of Health guidelines for the use of experimental animals. 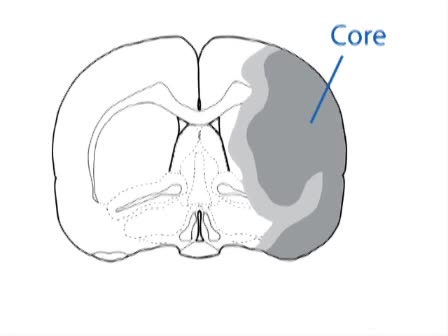