In this report we describe a method for the isolation and culture of the progenitor cell niche from the embryonic mouse kidney that can be used to study signaling pathways regulating stem/progenitor cells of the developing kidney. These cultured cells are highly accessible to small molecule and recombinant protein treatment, and importantly also to viral transduction, which allows efficient manipulation of candidate pathways.

Embryonic development of the kidney has been extensively studied both as a model for epithelial-mesenchymal interaction in organogenesis and to gain understanding of the origins of congenital kidney disease. More recently, the possibility of steering naïve embryonic stem cells toward nephrogenic fates has been explored in the emerging field of regenerative medicine. Genetic studies in the mouse have identified several pathways required for kidney development, and a global catalog of gene transcription in the organ has recently been generated http://www.gudmap.org/, providing numerous candidate regulators of essential developmental functions. Organogenesis of the rodent kidney can be studied in organ culture, and many reports have used this approach to analyze outcomes of either applying candidate proteins or knocking down the expression of candidate genes using siRNA or morpholinos. However, the applicability of organ culture to the study of signaling that regulates stem/progenitor cell differentiation versus renewal in the developing kidney is limited as cultured organs contain a compact extracellular matrix limiting diffusion of macromolecules and virus particles. To study the cell signaling events that influence the stem/progenitor cell niche in the kidney we have developed a primary cell system that establishes the nephrogenic zone or progenitor cell niche of the developing kidney ex vivo in isolation from the epithelial inducer of differentiation. Using limited enzymatic digestion, nephrogenic zone cells can be selectively liberated from developing kidneys at E17.5. Following filtration, these cells can be cultured as an irregular monolayer using optimized conditions. Marker gene analysis demonstrates that these cultures contain a distribution of cell types characteristic of the nephrogenic zone in vivo, and that they maintain appropriate marker gene expression during the culture period. These cells are highly accessible to small molecule and recombinant protein treatment, and importantly also to viral transduction, which greatly facilitates the study of candidate stem/progenitor cell regulator effects. Basic cell biological parameters such as proliferation and cell death as well as changes in expression of molecular markers characteristic of nephron stem/progenitor cells in vivo can be successfully used as experimental outcomes. Ongoing work in our laboratory using this novel primary cell technique aims to uncover basic mechanisms governing the regulation of self-renewal versus differentiation in nephron stem/progenitor cells.

3. Enzymatic Digestion of Kidneys (All Steps At Room Temperature Unless Otherwise Indicated)

4. Preparing Reagents for Fixation of Cells and Immunostaining

5. Fixation of Cells and Immunostaining 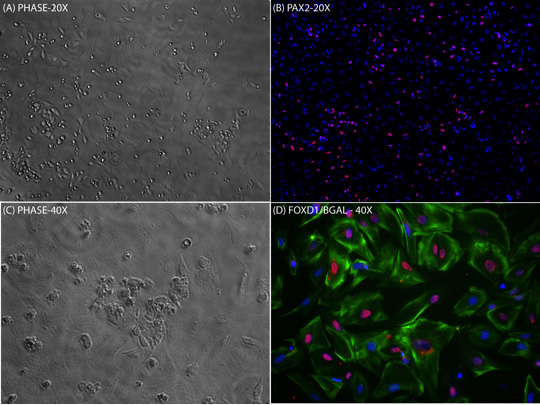 Figure 1. NZCs were purified from E17.5 embryos, plated at 200,000 cells per cm2 and incubated at 37° C for a total of 24 hours. Cells were imaged by phase contrast with a Leica DM IRB inverted microscope prior to immunofluorescent staining. (A) 20X phase contrast view of NZCs after 24 hours in culture. (B) Cells were fixed and stained using a rabbit anti-PAX2 antibody specific for nephron progenitor cells (red) and a secondary Alexa Fluor 568 conjugated donkey anti-Rabbit. Note blue nuclei counterstained with DAPI. (C) 40X phase contrast view of a cluster of nephron progenitors (centered) after 24 hours in culture. (D) 40X image of NZCs isolated from LacZ+ embryos of the Foxd1LacZ strain, which expresses β-galactosidase under the control of the Foxd1 promoter. Foxd1 is expressed in the stromal cell population within the nephrogenic zone of the developing kidney. Cells were stained with the F-actin marker phalloidin (Oregon green primary conjugate), the nuclear stain DAPI (Blue) and rabbit anti-β-galactosidase (secondary - Alexa Fluor donkey anti-Rabbit 568) for detection of Foxd1+ stromal cells (red).

In this protocol we describe a method to isolate and culture cells from the nephrogenic zone of the embryonic kidney. It is the development of a method initially published as part of a study of the effects of BMP7 treatment on cells of the nephrogenic zone (Blank et al., 2009). In the initial study, a series of experiments to characterize the cell types represented within the NZC population were conducted. Briefly, purification of NZCs from genetic reporters for the cortical stroma (Foxd1+/lacZ) (Hatini et al., 1996), collecting duct (Hoxb7+/cre;R26rEYFP) (Srinivas et al., 2001; Yu et al., 2002), and cap mesenchyme (Bmp7+/lacZ)(Godin et al., 1998) revealed that approximately 35% of harvested NZCs are cortical stroma, 52% are cap mesenchyme and that collecting duct contamination represents less than 0.04%. Lineage marking experiments using the Bmp7+/cre;R26rEYFP strain (Oxburgh et al., 2004; Srinivas et al., 2001) showed that approximately 10% of NZCs may be cells of the cap mesenchyme lineage that have differentiated and lost Bmp7 expression. Viability studies with 7AAD showed a survival rate in isolated NZCs of approximately 95%. We have recently experienced success in separating cell subpopulations within NZCs through flow cytometric sorting. However, the paucity of membrane-associated markers specific to each of the subpopulations of the nephrogenic zone has limited these analyses, and currently only cells derived from mice carrying fluorescent marker genes is feasible.

The efficacy of this protocol depends greatly on speed in the dissecting step. Both cell survival and responsiveness to growth factor stimulation increase when the kidneys remain in HBSS for shorter periods of time before the enzymatic digestion. A shorter preparation time thus results both in higher cell viability and a more robust response. Furthermore, care must be taken when removing the supernatant after spinning the cell suspension as the cell pellet is easily disturbed resulting in significant cell loss.

Since the initial work of Clifford Grobstein describing embryonic organ culture (Grobstein, 1953a; Grobstein, 1953b), the kidney has been a model system for organogenesis and the interaction between epithelial and mesenchymal cells in development. Recent microanatomic gene expression studies have revealed an unanticipated complexity of cell types within each of these cellular compartments (Brunskill et al., 2008), and complementary methods such as NZC culture are required to understand the interrelationship between these cells during nephrogenesis. The ultimate goal of our primary cell investigations is to define conditions in which nephrogenic zone cells can be indefinitely expanded in vitro both for studies of nephrogenesis and engraftment in the adult. The NZC culture system is an important step toward this goal, and ongoing studies in our laboratory aim to define the mechanisms of growth control in these cells. 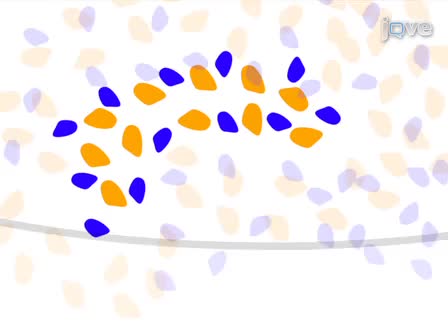