This video demonstrates the use of in vivo bioluminescence imaging to study immune responses after implantation of Engineered Heart Tissue (EHT) in rats.

Various techniques of cardiac tissue engineering have been pursued in the past decades including scaffolding strategies using either native or bioartificial scaffold materials, entrapment of cardiac myocytes in hydrogels such as fibrin or collagen and stacking of myocyte monolayers 1. These concepts aim at restoration of compromised cardiac function (e.g. after myocardial infarction) or as experimental models (e.g. predictive toxicology and substance screening or disease modelling). Precise monitoring of cell survival after implantation of engineered heart tissue (EHT) has now become possible using in-vivo bioluminescence imaging (BLI) techniques 2. Here we describe the generation of fibrin-based EHT from a transgenic rat strain with ubiquitous expression of firefly luciferase (ROSA/luciferase-LEW Tg; 3). Implantation is performed into the greater omentum of different rat strains to assess immune responses of the recipient organism following EHT implantation. Comparison of results generated by BLI and the Enzyme Linked Immuno Spot Technique (ELISPOT) confirm the usability of BLI for the assessment of immune responses.

Manufacture of fibrin-based EHT was performed as described elsewhere 4. In brief, to generate fibrin-based EHT for implantation purposes, a master mix was prepared containing cells isolated from neonatal ROSA/luciferase-LEW transgenic rat hearts, bovine fibrinogen and Matrigel. Agarose casting molds were prepared using Teflon spacers placed in 6-well culture dishes. After solidification of agarose, spacers were removed and silicone post racks were placed on culture dishes with posts reaching into the molds. To generate EHT, the mastermix was briefly mixed with a calculated amount of thrombin and pipetted into the mold. After polymerisation of fibrinogen, silicone racks with EHTs adhering to the posts were gently removed from the agarose casting molds, transferred to new 6-well cell culture dishes and maintained in a 37°C, 7% CO2 cell culture incubator using custom-made cell culture medium.

EHT were kept under cell culture conditions until day ten. During this time span, neonatal rat heart cells began to elongated, interconnect and align along force lines in between silicone posts. At the time of implantation, spontaneous coherent contractions were observed, deflecting silicone posts.

The implantation procedure are performed as follows:

Rat are anesthesized with isoflurane (2.5-3%) using an induction chamber. Human exposure to isoflurane can be reduced by working in a downdraft table or non-recirculating hood. Body temperature is maintained during the surgical procedure.

Create a graph (Excel) showing the signal intensity over time.

4. Correlation of BLI Results and ELISPOT 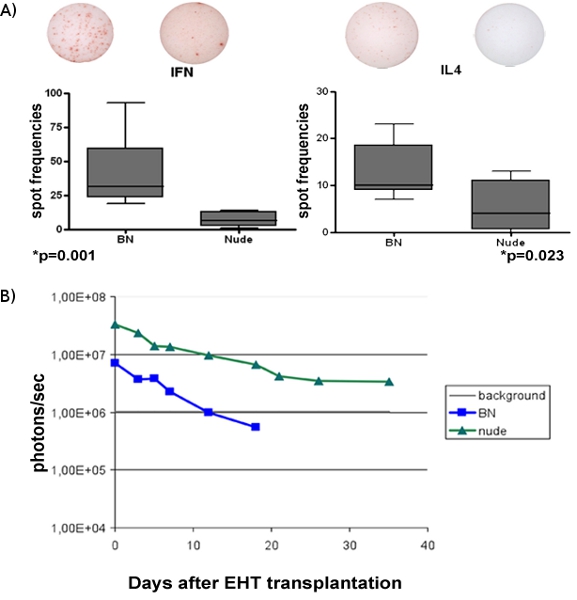 Figure 1. Correlation of BLI results and ELISPOT a) The cellular in vivo immune responses in immunocompetent Brown Norway and immunodeficient nude rats were studied after EHT implantation. Recipient splenocytes were harvested 5 days after EHT implantation. IFN? and IL-4 expression was evaluated by ELISpot assays using mitomycin-inhibited EHT as stimulators and 5x106 recipient splenocytes as responder cells. Th1 and Th2 responses were significantly higher in the immunocompetent model compared to the immunodeficient model as evidenced by IFNγ- and IL-4 production respectively. b) Luc+ EHTs were transplanted into the greater omentus of either immunocompetent BN rats or immunodeficient nude rats. Cell survival was longitudinally followed by BLI. The rate of animals that rejected the transplanted EHTs is presented. All BN rats rapidly rejected the EHT transplants, whereas the cells survived in T cell deficient rats.

Before clinical implementation of EHT technology for cardiac repair, fundamental questions such as immunogenicity of both cellular and matrix components or graft survival after implantation need to be assessed in experimental models. In-vivo bioluminescence imaging represents a useful new technique for monitoring cell survival after transplantation. We successfully generated fibrin-based EHT containing luciferase positive (luc+) heart cells by adaptation of an established protocol 4. These EHT were implanted into the greater omentum of recipient rats. Intraperitoneal injection of the specific substrate (d-Luciferin) generates signals that were detectable using the IVIS bioimaging platform (Xenogen). Signal intensity at baseline (120 minutes after implantation) measured in photons/sec/cm2/steridian served as a surrogate parameter for the number of cells inside grafted EHTs. Daily measurements allowed for non-invasive longitudinal assessement of graft survival. In a rejection model, decline of signal intensity over time was correlated with the intensity and kinetics of acute rejection in different rat strains.