A protocol to cut neurons in C. elegans with a MicroPoint pulsed laser is presented. We describe setting up the system, immobilizing worms, and severing labeled neurons. Advantages include a relatively low-cost system and the ability to sever neuronal processes or ablate cells in vivo.

Neurons communicate with other cells via axons and dendrites, slender membrane extensions that contain pre- or post-synaptic specializations. If a neuron is damaged by injury or disease, it may regenerate. Cell-intrinsic and extrinsic factors influence the ability of a neuron to regenerate and restore function. Recently, the nematode C. elegans has emerged as an excellent model organism to identify genes and signaling pathways that influence the regeneration of neurons1-6. The main way to initiate neuronal regeneration in C. elegans is laser-mediated cutting, or axotomy. During axotomy, a fluorescently-labeled neuronal process is severed using high-energy pulses. Initially, neuronal regeneration in C. elegans was examined using an amplified femtosecond laser5. However, subsequent regeneration studies have shown that a conventional pulsed laser can be used to accurately sever neurons in vivo and elicit a similar regenerative response1,3,7.

We present a protocol for performing in vivo laser axotomy in the worm using a MicroPoint pulsed laser, a turnkey system that is readily available and that has been widely used for targeted cell ablation. We describe aligning the laser, mounting the worms, cutting specific neurons, and assessing subsequent regeneration. The system provides the ability to cut large numbers of neurons in multiple worms during one experiment. Thus, laser axotomy as described herein is an efficient system for initiating and analyzing the process of regeneration.

The specific components of our system are outlined below. When properly assembled, the user should be able to focus the microscope with one hand, move the stage with the other (either with the mouse or the joystick), activate the laser with the foot pedal, and have a clear view of the on-screen image.

A detailed protocol to initially align and focus the laser is provided with the MicroPoint laser system. We assume that procedure has been followed successfully upon initial setup. This includes aligning the laser with the crosshairs in the eyepiece. Here we provide a protocol for regular maintenance of the laser's focus and intensity.

As noted in the MicroPoint manual, the pulsed nitrogen laser is capable of severely damaging the human eye. Care should be taken to never look directly into the laser beam. Once installed, the barrier filter should safely block radiation through the eyepieces.

Focusing in the z-plane

Focusing in the x-y plane

Adjusting the power of the laser

As an example, we describe characterization of regeneration of the γ-Aminobutyric acid (GABA) motor neurons. These neurons, which reside in the ventral nerve cord and extend processes circumferentially to the dorsal nerve cord, are essential for proper locomotion9. GABA neurons can be visualized by expressing a genetically encoded fluorophore, such as green fluorescent protein (GFP), under the control of the unc-47 or unc-25 promoters (strains EG1285 and CZ1200, respectively, available from the C. elegans Genetic Center).

Mount L4-stage worms as described, flip the worms so the GABA neurons on their right sides are facing up, and place the cover slip. Cut 1-3 of the posterior commissures in each worm, midway between the dorsal and ventral cords. Avoid cutting commissures that cross or fasciculate with other commissures, as these are difficult to score later. Recover worms as described.

18 to 24 hours after a successful axotomy, the worms will have recovered from surgery and exhibit normal locomotory and egg-laying behaviors. Discard worms that are dead or sick. Remount the remainder as described, and assess regeneration. We usually aim to assess at least 30 cut neurons per experimental condition. In oxIs12 animals, typically 60-70% of severed L4 GABA neurons will have initiated a growth cone structure, evidenced by a broadening of membrane at the tip and the extension of several neurite branches, and migrated from the cut site (Figure 4a). In many cases, the growth cones will have migrated to reconnect with the dorsal nerve cord, an adjacent neuronal commissure, or the distal stump. The remaining 30% of neurons will have either initiated no growth, forming a stump proximal to the site of axotomy, or will have extended only small filopodia (Figure 4b). 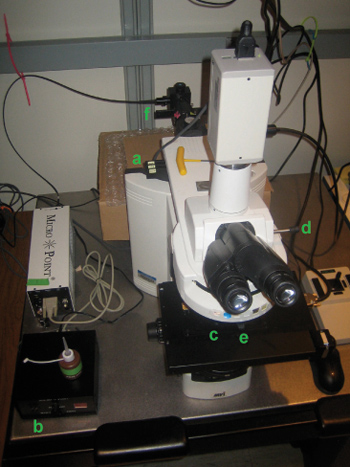 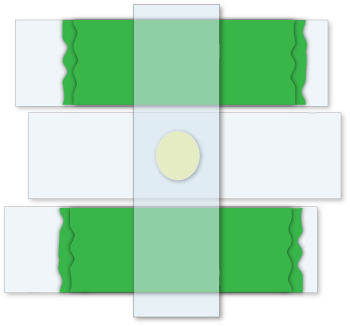 Figure 2. Preparing an agarose pad. To prepare an agarose pad of the desired thickness, two layers of tape (green) are placed on two slides. A slide is placed between the first two, and a drop of agarose is then added to the clean slide. Finally, a fourth slide is placed perpendicularly to the first three, resulting in a pad that is the thickness of two pieces of tape. 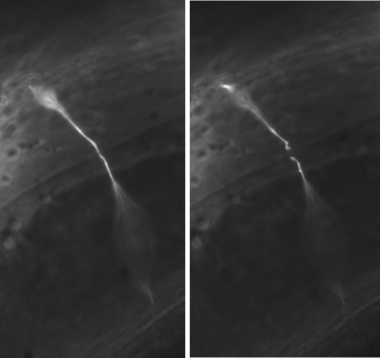 Figure 3. Representative GABA neuron axotomies. In a typical experiment, GABA neuron commissures are severed at the middle of the lateral aspect of the worm. A severed commissure is shown immediately before (left panel) and after (right panel) axotomy. All images were taken with a 100X oil objective. 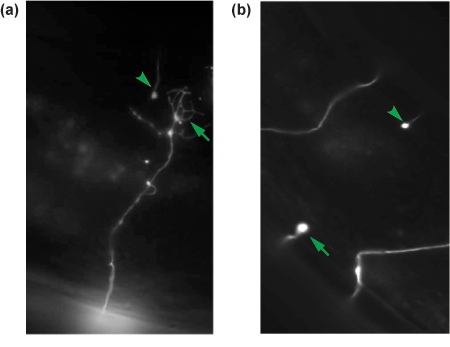 Figure 4. Representative results of GABA neuron axotomies. 24 hr post-axotomy severed axons are scored for regeneration. A regenerating axon with a growth cone (arrow) is shown in (a) while a non-regenerating axon is seen as a proximal stump (arrow) in (b). The distal stump of each cut axon is shown in each panel (arrowhead) and is an indication that the axon has been severed.

A variety of laser systems have been used to cut neurites in C. elegans, and several studies have examined their performance in detail3,7,10,11. The MicroPoint laser used in our protocol is a turnkey system that is easy to set up and maintain, and is available at a low cost to researchers compared to a Ti-Sapphire laser system. Compared to a Ti-Sapphire system, however, the MicroPoint laser is expected to cause damage to a larger area, which may be disadvantageous for some applications. If a Ti-Sapphire system is desired, an excellent protocol on building such a system is available12.

The current protocol can be performed on a variety of neurons in C. elegans; however, we note that differences in regenerative abilities between distinct types of neurons are expected13. Additionally, different transgenic backgrounds can affect regenerative success. Although the percentage of regenerating GABA neurons is fairly consistent between different transgenic marker strains, we have noted an overall slight increase in regeneration in juIs7614 vs. oxIs12 15 worms. Differences between markers of the touch neurons have also been described2.

We prefer to immobilize the worms with microbeads rather than anesthetics as the beads result in faster and more consistent immobilization16. This is also advantageous as we are able to observe regeneration free of any possible confounding effects due to anesthesia17. An alternative anesthetic-free method for immobilization is the use of microfluidic devices. The use of microfluidics for axotomy has been extensively described17-22.

We find that with consistent use, the laser functions best when the Coumarin 440 in the dye cell is changed once each week following the procedure outlined in the MicroPoint manual. If necessary, the attenuation slider can be used to increase power, but this may be an indication of old dye or laser misalignment. Also, the dye cell has a limited lifetime and will eventually need to be rebuilt or replaced (See Troubleshooting).

It can be difficult to maneuver the target neurite under the crosshairs that mark the laser focus, particularly if the animal is incompletely paralyzed. We find that a manual stage is not optimal for this purpose, although it is certainly usable. A joystick-controlled motorized stage is more precise, and we find that using software that supports image dragging with the mouse to move the motorized stage is best. Nikon Elements provides this feature and is described in this protocol, but the free Micromanager package, as well as other imaging software, may have similar functionality. A different way of fine targeting is to move the laser focus, rather than the animal. A galvanometer beam-steering mechanism is available as an add-on to the MicroPoint laser, if this approach is preferred.

Besides its application to the study of neuronal regeneration, the laser can be used to ablate other cell types, such as skin, muscle, or specialized cells, or to disrupt specific neuronal synapses23-27. Moreover, pathways that regulate the degeneration of neurons that accompanies injury or disease could be investigated with this system. As such, the use of pulsed lasers will continue to shed light on both the genetic factors and the cell biological changes that facilitate neuronal regeneration and other relevant processes.

Described here are some common problems and their associated solutions. 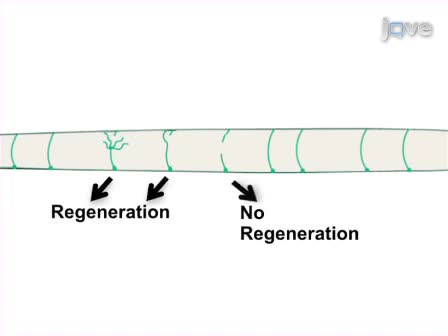