This article describes an in vitro technique for monitoring cancer cells invading through a monolayer of endothelial cells. The data is acquired in real-time as a function of changes in impedance on the surface of electrodes at the well bottom.

Metastatic dissemination of malignant cells requires degradation of basement membrane, attachment of tumor cells to vascular endothelium, retraction of endothelial junctions and finally invasion and migration of tumor cells through the endothelial layer to enter the bloodstream as a means of transport to distant sites in the host1-3. Once in the circulatory system, cancer cells adhere to capillary walls and extravasate to the surrounding tissue to form metastatic tumors4,5. The various components of tumor cell-endothelial cell interaction can be replicated in vitro by challenging a monolayer of human umbilical vein endothelial cells (HUVEC) with cancer cells. Studies performed with electron and phase-contrast microscopy suggest that the in vitro sequence of events fairly represent the in vivo metastatic process6. Here, we describe an electrical-impedance based technique that monitors and quantifies in real-time the invasion of endothelial cells by malignant tumor cells.

Giaever and Keese first described a technique for measuring fluctuations in impedance when a population of cells grow on the surface of electrodes7,8. The xCELLigence instrument, manufactured by Roche, utilizes a similar technique to measure changes in electrical impedance as cells attach and spread in a culture dish covered with a gold microelectrode array that covers approximately 80% of the area on the bottom of a well. As cells attach and spread on the electrode surface, it leads to an increase in electrical impedance9-12. The impedance is displayed as a dimensionless parameter termed cell-index, which is directly proportional to the total area of tissue-culture well that is covered by cells. Hence, the cell-index can be used to monitor cell adhesion, spreading, morphology and cell density.

The invasion assay described in this article is based on changes in electrical impedance at the electrode/cell interphase, as a population of malignant cells invade through a HUVEC monolayer (Figure 1). The disruption of endothelial junctions, retraction of endothelial monolayer and replacement by tumor cells lead to large changes in impedance. These changes directly correlate with the invasive capacity of tumor cells, i.e., invasion by highly aggressive cells lead to large changes in cell impedance and vice versa. This technique provides a two-fold advantage over existing methods of measuring invasion, such as boyden chamber and matrigel assays: 1) the endothelial cell-tumor cell interaction more closely mimics the in vivo process, and 2) the data is obtained in real-time and is more easily quantifiable, as opposed to end-point analysis for other methods.

An example of HUVEC monolayer invasion by metastatic and non-metastatic cells is shown in Figure 3. K7M2 is a metastatic osteosarcoma cell line. These cells express high levels of the cytoskeletal linker protein ezrin, which accounts for the invasive properties of this cell line13,14. When HUVEC cells are challenged with K7M2 cells, there is a drop in electrical resistance within 6 hours. This drop in electrical resistance represents the invasion of HUVEC monolayer by the invading tumor cells. The K12 cell-line, on the other hand, expresses much lower levels of ezrin and is consequently less metastatic13. Challenging the HUVEC monolayer with K12 cells results in a less steep drop in resistance as the cells are unable to adhere to or invade through the HUVEC monolayer (Figure 3). 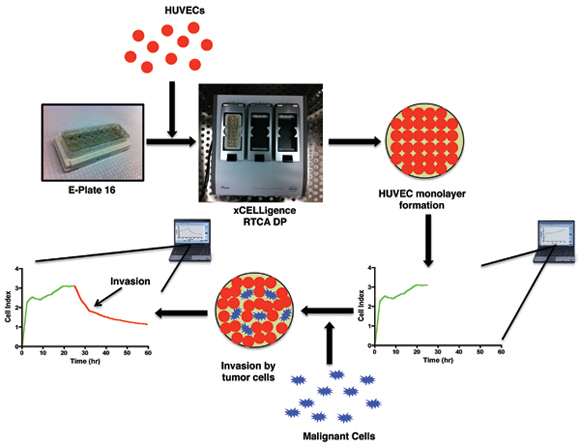 Figure 1. Schematic diagram of work flow process for invasion of endothelial cells by tumor cells. HUVEC cells are plated on gelatin coated E-plates and allowed to form a confluent monolayer. Malignant cells are added once a monolayer has formed and invasion is monitored in real-time as the cell index changes due to invasion of the endothelial monolayer. 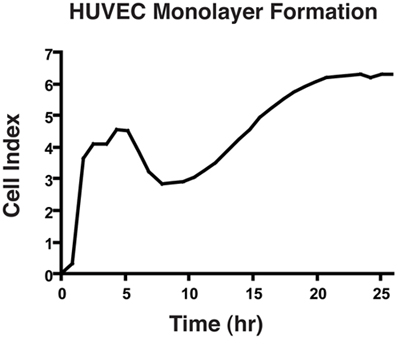 Figure 2. HUVEC monolayer formation. Changes in cell index as HUVEC cells attach to and spread on gelatin-coated gold electrodes. The formation of a confluent monolayer is represented by a stabilization of cell index after 18 hours. 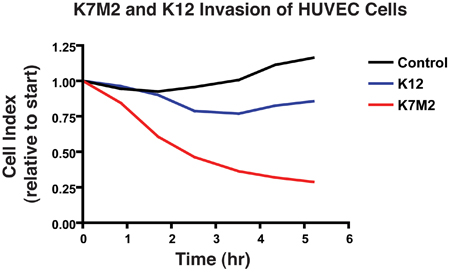 Figure 3. Invasion of HUVEC cells by K7M2 and K12 osteosarcoma cells. A steep decrease in cell-index occurs within a few hours of the introduction of highly metastatic K7M2 cells. K12 cells, on the other hand, are less metastatic and are unable to penetrate the endothelial monolayer as efficiently as K7M2 cells. This is represented by a less steep decrease in cell index when the HUVEC monolayer is challenged with K12 cells. Control represents impedance of HUVEC monolayer in the absence of cancer cells. Experiments were performed in triplicate.

The real-time HUVEC invasion assay is a simple, yet powerful method for monitoring invasion. It provides results in real-time, which is a significant advantage over other traditional techniques that rely on end-point analysis. The assay can be modified to test drugs, antibodies, ligands and proteins as inhibitors or stimulators of metastasis. The effect of different agents on endothelial/cancer cell cross-talk can be assessed as well. When introducing exogenous agents, such as growth factors and drugs in the culture media, it is important to ensure that they do not affect the integrity of the HUVEC monolayer. Disruption of the HUVEC monolayer can be tested by introducing the exogenous agent in the absence of invading cells, and ensuring that there is no change in cell index. Thus, appropriate controls should be included as part of the experimental design.

Different cell-lines demonstrate different cell-index curves as they form a confluent monolayer. The shape of the curve, as well as the maximum cell-index attained, is cell-type specific. HUVEC cells show a characteristic transient flattening of cell index 4-6 hours after seeding, followed by another stabilization at a higher cell index after 16-18 hours. Hence, it is important to let the cells form a confluent monolayer for at least 18 hours before the addition of tumor cells.

Since the cell index is dependent on the ionic environment at the electrode/cell interphase, various factors such as cell-morphology and quality of cell-cell adhesions influence the cell-index, in addition to the area of well bottom covered. Thus, the decrease in cell index, which occurs upon tumor cell invasion, is a function of several factors, which include the retraction of endothelial junctions and subsequent tumor cell invasion.

The xCELLigence instrument is manufactured in three different configurations: real time cell analyzer (RTCA) SP, RTCA MP and RTCA DP. The RTCA SP instrument holds one 96-well E-plate whereas the RTCA MP instrument can hold up to six 96-well E-plates simultaneously. This allows for high-throughput screening of drugs and compounds. The experiments in this article are performed using the RTCA DP instrument, which can hold three 16-well E-plates. Each E-plate holding station can be independently operated, which allows multiple users to run experiments simultaneously. The RTCA DP instrument can also be used to study migration using CIM-plates. These are 16-well plates with upper and lower chambers separated by a polyethylene terephtalate (PET) membrane with a median pore size of 8um. The electronic sensors are located on the underside of the porous membrane of the upper chamber. The lower chamber serves as a reservoir for chemoattractant for cells in the upper chamber. However, a major advantage of the HUVEC invasion assay over the CIM-plates is that the tumor cell invasion in the former is not restricted by the pore size, as endothelial cell invasion depends on cross-talk between the tumor and endothelial cells.

The HUVEC invasion assay can also be performed on ECIS Z instrument, manufactured by Applied Biophysics (Troy, NY). The ECIS Z instrument utilizes a technology similar to the xCELLigence instrument, with differences in the array and electrode configurations. We have successfully performed HUVEC invasion assays using the 8-well ECIS arrays. It is important to note that the well-bottom surface area is larger in the ECIS arrays, which requires a larger number of endothelial and tumor cells to be plated: 2.5 x 105and 1 x 105 cells respectively.

The publication cost for this manuscript was kindly provided by Roche Applied Science.

We would like to thank Dr. Anton Wellstein and members of his laboratory for sharing their experience and helping us to optimize presented methods. 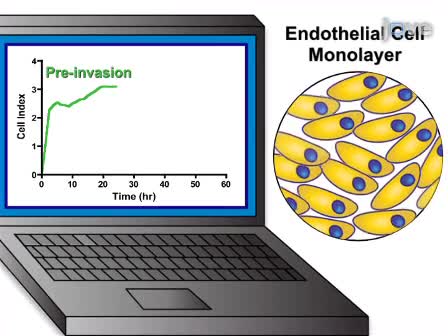