We describe an established technique to measure and analyze odor-evoked calcium responses in the antennal lobe of living Drosophila melanogaster.

The antennal lobe is the primary olfactory center in the insect brain and represents the anatomical and functional equivalent of the vertebrate olfactory bulb1-5. Olfactory information in the external world is transmitted to the antennal lobe by olfactory sensory neurons (OSNs), which segregate to distinct regions of neuropil called glomeruli according to the specific olfactory receptor they express. Here, OSN axons synapse with both local interneurons (LNs), whose processes can innervate many different glomeruli, and projection neurons (PNs), which convey olfactory information to higher olfactory brain regions.

Optical imaging of the activity of OSNs, LNs and PNs in the antennal lobe - traditionally using synthetic calcium indicators (e.g. calcium green, FURA-2) or voltage-sensitive dyes (e.g. RH414) - has long been an important technique to understand how olfactory stimuli are represented as spatial and temporal patterns of glomerular activity in many species of insects6-10. Development of genetically-encoded neural activity reporters, such as the fluorescent calcium indicators G-CaMP11,12 and Cameleon13, the bioluminescent calcium indicator GFP-aequorin14,15, or a reporter of synaptic transmission, synapto-pHluorin16 has made the olfactory system of the fruitfly, Drosophila melanogaster, particularly accessible to neurophysiological imaging, complementing its comprehensively-described molecular, electrophysiological and neuroanatomical properties2,4,17. These reporters can be selectively expressed via binary transcriptional control systems (e.g. GAL4/UAS18, LexA/LexAop19,20, Q system21) in defined populations of neurons within the olfactory circuitry to dissect with high spatial and temporal resolution how odor-evoked neural activity is represented, modulated and transformed22-24.

Here we describe the preparation and analysis methods to measure odor-evoked responses in the Drosophila antennal lobe using G-CaMP25-27. The animal preparation is minimally invasive and can be adapted to imaging using wide-field fluorescence, confocal and two-photon microscopes.

Data is processed using ImageJ (with Mac biophotonics plug-in, www.macbiophotonics.ca) and custom written programs in Matlab and R as follows:

We used the protocols above to record and analyze propionic acid-evoked responses of flies expressing G-CaMP1.628 under the control of the promoter for the olfactory co-receptor IR8a, which is active in several different populations of OSNs29,30 (Figures 3-5). Stimulation with 1% propionic acid elicits increases in G-CaMP fluorescence - indicating increases in intracellular calcium - in OSNs innervating two glomeruli, DC4 and DP1l (Figure 3B). We illustrate different ways of representing data from multiple flies in Figure 5: line activity traces, heatmaps and a bar plot of peak responses. Propionic acid-evoked responses have distinct peak amplitudes and temporal dynamics in DC4 and DP1l. Moreover, although responses are generally robust, variability between individual animals can also be observed in both glomeruli (see heatmaps in Figure 5A). Quantification of the peak responses (Figure 5B) allows a simple statistical comparison between different glomeruli and different odorants across animals. However, odor-evoked calcium responses can have non-uniform temporal dynamics, and quantifying their magnitude with a single value will disregard this complexity. 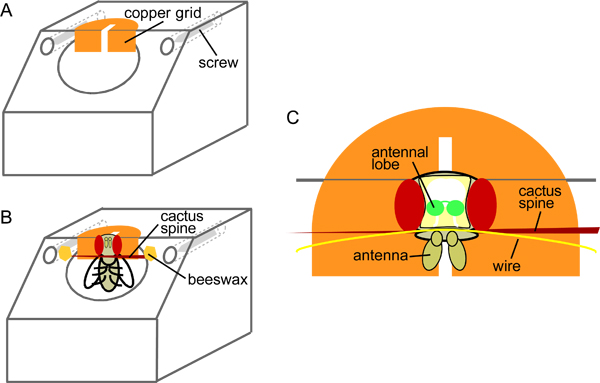 Figure 1. Schematic of the mounting block (A) before and (B) after introduction of the fly, and (C) a top view in close-up (adapted from31). 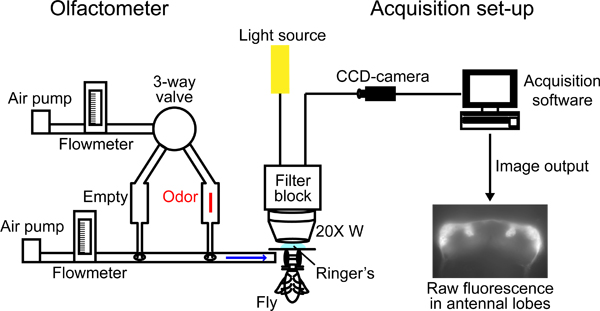 Figure 2. Schematic of the experimental set-up. 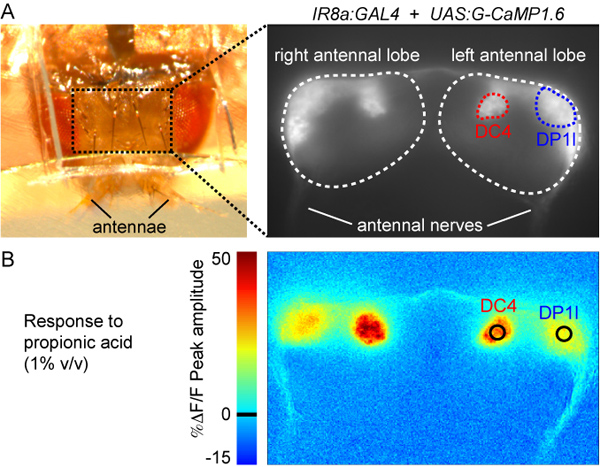 Figure 3. (A) Top view of the fly preparation after step 2.8 (left panel) and raw fluorescence image of the antennal lobes labeled with G-CaMP1.6 (Genotype: IR8a promoter:GAL4; UAS:G-CaMP1.6). DC4 and DP1l glomeruli can be distinguished by their morphology, size and position and are marked in red and blue, respectively.
(B) Color-coded image of the response to propionic acid (1% v/v). The image corresponds to the ΔF/F of the peak of the response calculated as explained in step 5.6 (see also Figure 5A). The colorscale on the left indicates the %ΔF/F value. The black circles indicate the position and size of the region of interest used to quantify the responses (see Figure 5).

Figure 4. Correcting bleaching of the fluorescent reporter signal. Examples of the effect of bleach correction as described in step 5.3. Sample data on the left panel can be corrected without major changes in the shape of the response. Sample data on the right panel is severely affected by bleach correction, likely because the signal drops and is maintained below baseline after odor stimulus termination.

Figure 5. (A) Top: temporal dynamics of calcium responses of glomeruli DC4 (left) and DP1l (right) to propionic acid (1% v/v). The black traces show the median of the mean ΔF/F within the region of interest (see Figure 3B) across eight animals. The grey surface indicates the range between the first and third quartiles of the distribution. Presentation of median and quartile values provides more information about the variability and distribution of observed responses than mean and standard error. The green and magenta boxes indicate the frames averaged to calculate the peak responses shown in Figure 3B, and quantified in Figure 5B. Bottom: the heatmaps show the response data for all individual animals in separate rows, with ΔF/F values represented by the colorscale (far right). The horizontal black bars indicate the time and duration of the stimulus. (B) Median peak responses to propionic acid across eight animals for DC4 and DP1l glomeruli. The error bars indicate the range between first and third quartiles of the distribution.

The preparation and analysis methods described here can be used to analyze odor-evoked responses in any population of neurons in the antennal lobe (OSNs, LN and PNs) for which a corresponding driver transgene is available. While we describe its application using a fluorescence microscope, optical imaging of this preparation can equally be performed using confocal or two-photon microscopy22,32. Indeed, these latter instruments alleviate the light-scattering problem of wide-field microscopy, which can reduce the resolution of images, especially when large numbers of neurons express the reporter. This preparation usually permits recordings of odor-evoked responses for at least half an hour, but this time can be significantly longer or shorter depending on the number and length of measurements recorded, the exposure time used for each frame and the inter-stimulus interval. Furthermore, two-photon excitation can reduce photobleaching of the fluorescent reporter, as well as cellular phototoxicity, to permit measurement over longer time periods22,32.

Regardless of the choice of microscope, movement of the fly brain within the head capsule is the most recurrent problem when imaging in intact animals. While movement correction can correct minor issues (step 5.1), it is usually better only to record from highly stable preparations. Strategies to reduce movement artifacts include: (i) properly constraining the proboscis of the fly with the cactus spine; (ii) immobilizing the fly's legs by fixing them to the stage with eicosane (prior to step 2.6) (eicosane can be melted at ~37 °C; use a silver wire to extend and refine the tip of the soldering iron for this purpose); (iii) nicking the oesophagus (visible between the antennal nerves) with fine tweezers.

In addition to G-CaMP1.6 used here, a number of optimized versions of G-CaMP and other calcium indicators are available, which differ in their signal-to-noise ratio, baseline fluorescence and temporal dynamics12,28,33. The precise choice of sensor should take into account all of these properties, the type of neurons to be analyzed and the biological question being addressed. Current sensors report calcium changes that correlate fairly well with action potentials12,34, and their further improvement, coupled with increasing numbers of specific genetic driver lines35 will continue to enhance the potential of optical imaging of neural activity in the intact fly.

We acknowledge Silke Sachse and Beate Eisermann in the development of this methodology, Pablo Traversa for drawing the mounting block blueprints and Daniela Pelz for use of the schematic in Figure 1. We are grateful to Silke Sachse, Pavan Ramdya and Raphael Rytz for comments on the manuscript. R. Bell is supported by a Boehringer Ingelheim Foundation PhD Fellowship. Research in R. Benton’s laboratory is funded by a European Research Council Starting Independent Researcher Grant and the Swiss National Science Foundation. 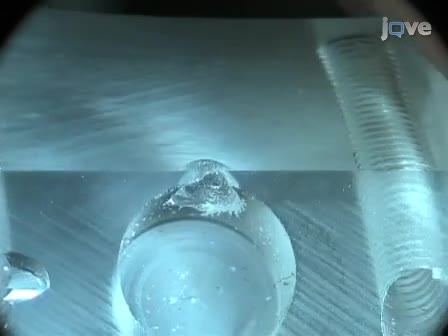