We demonstrate a minimally invasive technique referred to as neonatal subventricular zone electroporation. The technique consists of injecting plasmid DNA into the lateral ventricles of neonatal pups and applying electrical current to deliver and genetically manipulate neural stem cells

Neural stem cells (NSCs) line the postnatal lateral ventricles and give rise to multiple cell types which include neurons, astrocytes, and ependymal cells1. Understanding the molecular pathways responsible for NSC self-renewal, commitment, and differentiation is critical for harnessing their unique potential to repair the brain and better understand central nervous system disorders. Previous methods for the manipulation of mammalian systems required the time consuming and expensive endeavor of genetic engineering at the whole animal level2. Thus, the vast majority of studies have explored the functions of NSC molecules in vitro or in invertebrates.

Here, we demonstrate the simple and rapid technique to manipulate neonatal NPCs that is referred to as neonatal subventricular zone (SVZ) electroporation. Similar techniques were developed a decade ago to study embryonic NSCs and have aided studies on cortical development3,4 . More recently this was applied to study the postnatal rodent forebrain5-7. This technique results in robust labeling of SVZ NSCs and their progeny. Thus, postnatal SVZ electroporation provides a cost and time effective alternative for mammalian NSC genetic engineering.

This procedure is in accordance with Yale IACUC requirements. Scientists should make sure that IACUC guidelines are approved and followed according to their institutional requirements.

Neonatal subventricular zone electroporation results in the labeling of nearly all radial glia contiguous with the dorsal, dorsal lateral, and lateral subventricular zone following the "sweeping" movement of the tweezer electrode (Figure 1E). However, electroporation can be tailored to the requirement of the respective experiment but not sweeping the electrode and using specific placement and orientation as detailed in the video. For example, since dorsally localized radial glia differ from those lining the lateral section of the ventricle, one can chose to only electroporate a single region9,10 . Further specificity can also be given using smaller electrodes.

Plasmid DNA is rapidly diluted within the first three weeks11. Therefore, identifying genomically modified cells using plasmid DNA is not recommended. To circumvent this limitation, CRE recombinase expressing plasmids are introduced along with GFP into mice which have a stop sequence flanked by lox P sites upstream of a genomically expressed fluorescent protein (tdTomato)12. Upon recombination, the stop sequence is removed and the fluorescent protein is expressed (Figure 1F). By four weeks post-electroporation few GFP plasmid expressing cells are seen in the subventricular zone whereas many more tdTomato positive cells are seen. Upon sectioning the olfactory bulb it is also apparent that in comparison to tdTomato expressing cells, far fewer GFP expressing cells are present, however both have acquired features of mature granule cells (Figure 1G). 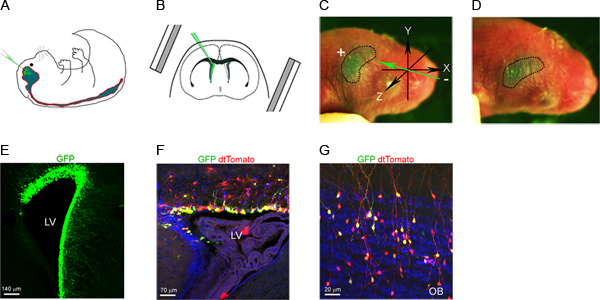 Here we detail the technique of neonatal SVZ electroporation, a technique to rapidly and robustly label and manipulate SVZ stem cells and their progeny. There are several advantages that electroporation has in comparison to other techniques. First, given the focal labeling of cells, one is able to discern cell autonomous and non-cell autonomous effects. Second, genetic manipulation using inducible systems allows one to compare effects prior to or after synaptic integration. Furthermore, one can bypass the use of multiple plasmids by electroporating CRE expressing mice with plasmids containing loxP sites. Fourth, gene reporter plasmids can be used to study transcriptional transactivation. In this case, transcriptional activity can be measured only in cells that are manipulated; added specificity can be introduced when subregions are microdissected. Fifth, the transient labeling of transit amplifying cells due to continued proliferation and dilution of the plasmid can be used as "birthdating" method similar to labeling with thymidine analogs11. Sixth, although the transient labeling of cells could be seen as a disadvantage, the technique should be amenable to transposase-transposon pairs to induce genomic integration13. Alternatively, ongoing neurogenesis can be altered with CRE recombinase to induce genomic modification of mice containing alleles flanked by loxP sites7,11 . Using this protocol, newborn neurons were identified up to four months post-electroporation in Rosa26R-Stop-tdTomato mice in which the stop cassette is flanked by loxP sites12. Taken together, neonatal SVZ electroporation is a cost effective and time efficient minimally invasive tool for the transient or permanent genetic manipulation and labeling of forebrain neural stem cells and newborn neurons.

The authors have no disclosures to make. 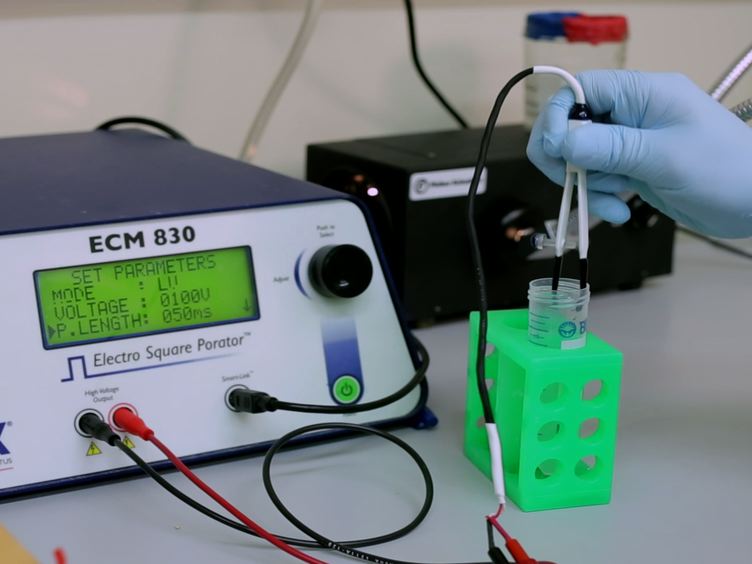