We describe the diverse steps to implant chronic silicon probes and to record place cells in mice that are running head-fixed on a cue-enriched treadmill apparatus.

An important requisite for understanding brain function is the identification of behavior and cell activity correlates. Silicon probes are advanced electrodes for large-scale electrophysiological recording of neuronal activity, but the procedures for their chronic implantation are still underdeveloped. The activity of hippocampal place cells is known to correlate with an animal's position in the environment, but the underlying mechanisms are still unclear. To investigate place cells, here we describe a set of techniques which range from the fabrication of devices for chronic silicon probe implants to the monitoring of place field activity in a cue-enriched treadmill apparatus. A micro-drive and a hat are built by fitting and fastening together 3D-printed plastic parts. A silicon probe is mounted on the micro-drive, cleaned, and coated with dye. A first surgery is performed to fix the hat on the skull of a mouse. Small landmarks are fabricated and attached to the belt of a treadmill. The mouse is trained to run head-fixed on the treadmill. A second surgery is performed to implant the silicon probe in the hippocampus, following which broadband electrophysiological signals are recorded. Finally, the silicon probe is recovered and cleaned for reuse. The analysis of place cell activity in the treadmill reveals a diversity of place field mechanisms, outlining the benefit of the approach.

Silicon probes present several advantages for electrophysiological recordings, including the fact that they are designed with sharp profiles minimizing tissue damage and that they present a precise layout of densely packed recording sites1,2,3,4. They are used to study various systems in different species, including humans3,5,6, with diverse approaches1,7. Yet, their recurrent use is still relatively limited because of their cost, fragility, and the fact that convenient methods for chronic experiments are lacking8. Recent advances in 3D printing technology have made possible the custom designing of devices such as micro-drives and head-plates to allow an easier handling of these delicate electrodes. In a first step, we will describe how to build and use a set of tools that we have developed for the implantation of chronic silicon probes14.

While place cells are typically studied using freely-moving animals running in mazes, recently they were also investigated in virtual environments15 and in treadmill apparatii9 (Figure 1A). These experimental methods offer the advantage that animals can be head-restrained, making the use of 2-photon microscope15, patch-clamp16, and optrode9,10,11 techniques easier, in addition to providing enhanced control on animal behavior and environmental cues12. In a second step, we will present the procedures for training mice and recording place cell activity in a treadmill apparatus.

All methods described have been approved by the Animal Care and Use Committee of the Korea Institute of Science and Technology.

1. Preparing the Micro-drive and Electrode

2. Surgery for Fixation of the Hat on the Skull

All tools used for surgery are sterilized beforehand by autoclaving. A dry heat beads device is used forto sterilize tools that become contaminated and need to be sterilized during the surgery.

4. Implantation of the Silicon Probe

A mouse was first trained to run on a two-meter long belt devoid of cues (Figure 1C). Following electrode implantation, a new belt of the same length but presenting 3 pairs of cues was installed on the treadmill, in order to generate allocentric spatial representations12,14. Broadband signals were recorded at a sampling rate of 30,000 Hz, using a 250-channel recording system (amplifier board with USB interface board and custom-made Labview interface) and two silicon probes (Figure 1A, 4 shanks, 8 sites per shanks) implanted in CA1 and CA3 (Figure 1B). Units were detected using a threshold function on the high-pass filtered signals (0.8-5 kHz). Cell isolation was performed using a semi-automatic spike sorting method15,16,17. The forward/backward motion of the treadmill was monitored using LED and photo-sensor couples and recorded by digital input channels of the recording system.

An average of 148±35 cells (mean±s.e.m) could be isolated in each session, among which 38.4±3.5% showed clear place field activity (Figure 2). The place fields were relatively stable across many trials, in either the initial day of recording (Figure 2A) or after several days of exposure to the cued belt (Figure 2B and Figure 2C). Different types of spatial representations could be discerned. Some cells showed repeated place fields correlated with the identity of the cues (Figure 2A), while other cells showed a unique place field (Figure 2C)12. Hence, we could record hippocampal place cells over several days and identify a diversity of place field mechanisms, two important requisites for studying the mechanisms and dynamics associated with spatial navigation, learning, and memory. 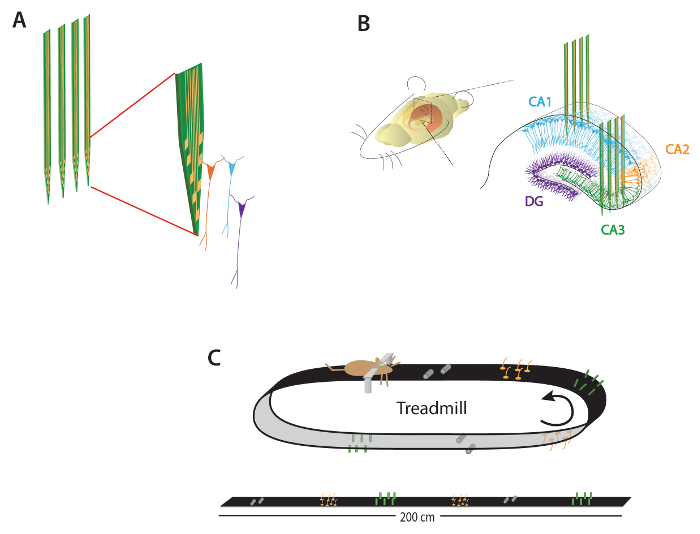 Figure 2: Chronic recording of place cells. (A) Color coded representation of place fields (top), spike auto-correlogram (bottom left) and spike waveforms (bottom right) for a cell example recorded on day 1. (B-C) Same as (A) for cells examples recorded on day 3 (B) and day 5 (C). Please click here to view a larger version of this figure.

Chronic recording of neuronal activity is critical for understanding neural processes such as hippocampal place fields. Our approach to perform chronic silicon probe implantantation distinguishes itself from other methods7,18,19,20 by the fact that it is relatively simple to recover the electrode package at the end of the experiment. While place cells are typically studied in freely-moving conditions, the treadmill apparatus not only significantly simplifies experimental design and data analysis, it also allows researchers to scrutinize place field mechanisms in minimal contexts during many repetitions of stereotyped animal trajectories12. It is also much simpler to build than virtual reality systems, since it only requires 3D-printed wheels, one-dimensional motion sensors, and a microcontroller.

Stable place field activity could be recorded over many days, an important requisite for investigating the long-term network dynamics associated with learning. In this respect, some issues should be considered. First, the processes of brain tissue degeneration and scar formation around the silicone probes might themselves generate long-term variations in activity patterns. It is therefore important for all surgical procedures to be done carefully to cause minimal damage to brain tissues and blood vessels. Second, it is relatively difficult to track individual cells over consecutive days, because of electrode drifts in the brain14. In this respect, imaging techniques such as two-photon microscopy and micro-endoscopy might be better suited, as cell identity can be traced from the morphology and spatial configuration of cells21,22,23. They also allow a larger yield in term of number of cells recorded and provide direct information about cell gene expressions24. However, imaging techniques are quite invasive when deep brain regions are concerned and cannot resolve single action potentials as they mainly rely on calcium signals. Hence, an optimal solution for longitudinal studies might be to combine both optical and electrophysiological approaches.

Finally, it is worth noting that the set of techniques we have described might be easily adaptable for other types of electrode, including Neuropixels (https://www.janelia.org/lab/harris-lab-apig) and optrodes11,25,26, and can be used in a range of experimental models other than hippocampal place cells. With the fast progress in 3D-printing technology, the further improvement and customization of recording and behavioral devices should become more and more straightforward and accessible to the labs.

This work was supported by the Korea Institute of Science and Technology Institutional Program (Projects No. 2E26190 and 2E26170) and the Human Frontier Science Program (RGY0089/2012). 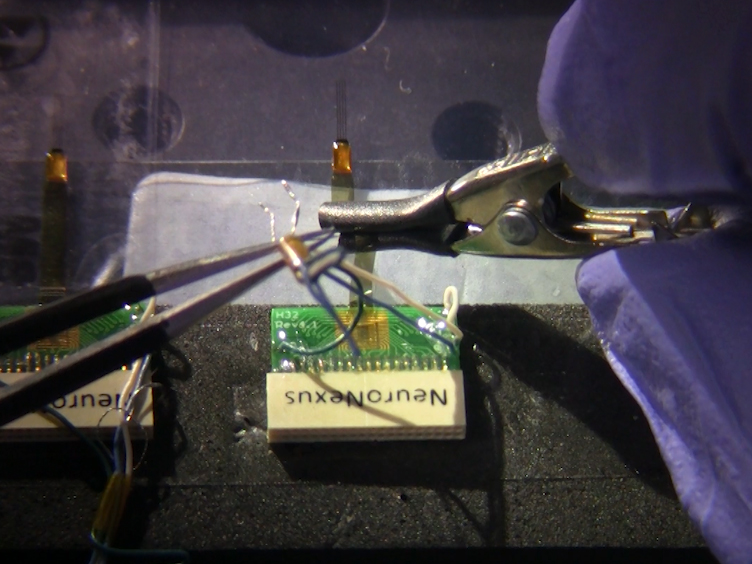