We have developed two methods for studying effects of visual cues on behavior in the absence of tactile and chemical cues. One method involves videotaping responses of crayfish to reflective walls in an aquarium; the other examines effects of visual inputs provided by a live crayfish behind a transparent partition.

We have used two methods to provide visual stimuli to crayfish without providing chemical and mechanical cues. In one method, crayfish are videotaped in an aquarium where half of the walls are covered in mirrors to provide a reflective environment, and the other half are covered in a non-reflective (matte finish) plastic. This gives the crayfish a choice between reflective and non-reflective environments. The reflective environment provides visual cues in the form of reflected images of the crayfish as it moves throughout half of the tank; these visual cues are missing from the non-reflective half of the tank. An alternative method is to videotape the behavior of crayfish in an aquarium separated by a smaller chamber at each end, with a crayfish in one small chamber providing visual cues and an inert object in the opposite small chamber providing visual input from a non-moving, non-crayfish source.

2. Construction of Test Aquarium and Controls

4. Analysis of Responses to Visual Stimuli

During the 30 minute fighting period, all pairs exhibit agonistic behaviors. Such behaviors include antenna tapping, lunging, pushing, grasping, chelae striking, and flipping the opponent, as reported elsewhere (e.g. May & Mercier 2006, 2007). Eventually one crayfish in each pair consistently retreats and avoids further contact. The retreating crayfish is deemed the loser and is ranked as subordinate; the winning crayfish is ranked as dominant.

Rank can also be monitored throughout the paired housing period by observing crayfish behavior in the holding tank, which contains only one plastic tube for shelter. The dominant crayfish invariably occupies the shelter, and the subordinate crayfish does not. The subordinate crayfish often walks with the chelae held close together and out in front, and the dominant crayfish typically walks with the chelae raised and further apart (Guiasu & Dunham, 1998). When new food is added to the holding tank, the dominant crayfish usually takes the food first. In our studies with P. clarkii (e.g. May & Mercier 2006, 2007), there are typically no rank reversals after three days of continuous pairing.

In rare cases, one member of the pair dies before the pairing period is complete. This is more likely to occur if the pairing period is long (e.g. 14 days) and if the crayfish are too closely matched by size or weight. Thus, deaths can be avoided by allowing approximately a 10% difference in weight. If one member of a pair dies, data from the other member are not included in the study.

Table 1. Behaviors exhibited by P. clarkii in the central compartment of the test tank. 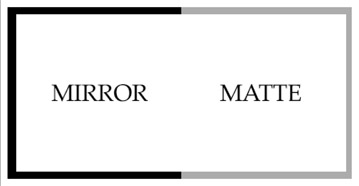 Figure 1. Schematic of aquarium used in Method I. Half of the aquarium is lined with mirrors, while the other half is lined with non-reflective plastic. 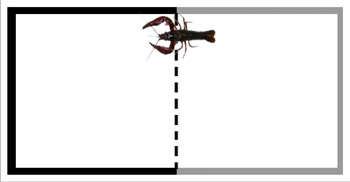 Figure 3. Schematic of test aquarium with the midline depicted as a vertical dotted line. The crayfish passes from one side to the other when the coxae of the chelipeds pass the midline. 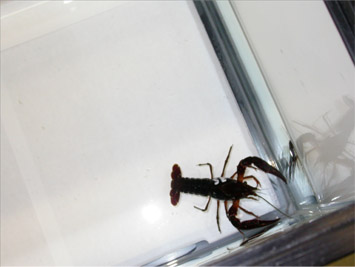 Figure 4. Diagram indicating the position of the crayfish while cornering. Note that the tips of both chelae are touching different walls.

Figure 5. Diagram indicating the position of the crayfish while facing the end wall. Note that both chelae are touching the same wall. 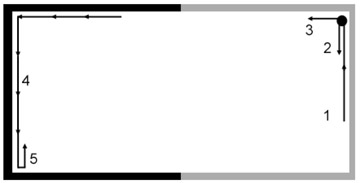 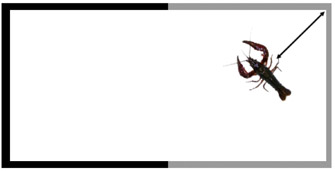 Figure 7. Schematic showing crossing behavior. Crossing occurs when the crayfish leaves one wall and travels to another wall, at a distance of at least one body length from the nearest wall (arrow). 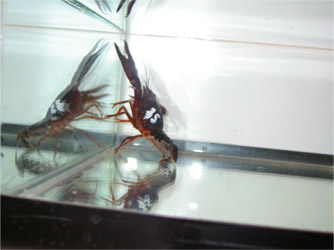 Figure 8. Photograph depicting rearing up behavior. The crayfish stands on the last two walking legs and lifts the body against a wall, making contact with at least one walking leg.

The observation that dominant crayfish spend more time in a reflective environment suggests that they recognize a reflected image as a conspecific, and that visual cues are sufficient to elicit approach behavior. Similar results using a live crayfish instead of a reflected image support such an interpretation. Subordinate and isolated crayfish do not show such a preference for the reflective environment, nor do subordinate crayfish appear to prefer a live crayfish over a cube. Thus, responses to visual cues depend on dominance rank. It is not yet clear whether crayfish are attracted specifically by a crayfish image or by movement. Nonetheless, it is possible to explore the role of visual inputs and to identify visual cues using mirrors and images provided across a transparent partition.

Previous results indicate that dominant and subordinate crayfish respond to reflective surfaces in essentially the same manner after only a 30 min pairing session, and that differences in behavior emerge with 3 - 14 days of pairing because of changes in behavior of the losing crayfish (May & Mercier, 2007). Thus, the behaviors one observes in response to visual cues depend on both the outcome of the encounter and on the duration of socialisation. Winning or losing agonistic encounters is known to affect success of future encounters, with winning increasing the likelihood of winning again, and losing increasing the probability of subsequent loses (Hsu & Wolf, 1999). The mechanisms underlying behavioral plasticity exhibited by losing crayfish in response to visual cues might be related to changes in the nervous system that accompany reinforcement of subordinate status (May & Mercier, 2006; 2007).

The experiments described here can be modified to assess the complexity of sensory cues required to elicit approach behavior. This could be achieved by altering various aspects of the visual cues provided behind a transparent partition and by combining such visual cues with chemical and tactile factors. Conditioned water could be added to the mirror / matte aquarium to add a chemical component. Alternatively, holes could be added to the transparent barrier in the end chamber tank to allow for transfer of chemical cues from the live source crayfish.