In this article, we present a microfluidic-based method for particle confinement based on hydrodynamic flow. We demonstrate stable particle trapping at a fluid stagnation point using a feedback control mechanism, thereby enabling confinement and micromanipulation of arbitrary particles in an integrated microdevice.

The ability to confine and manipulate single particles in free solution is a key enabling technology for fundamental and applied science. Methods for particle trapping based on optical, magnetic, electrokinetic, and acoustic techniques have led to major advancements in physics and biology ranging from the molecular to cellular level. In this article, we introduce a new microfluidic-based technique for particle trapping and manipulation based solely on hydrodynamic fluid flow. Using this method, we demonstrate trapping of micro- and nano-scale particles in aqueous solutions for long time scales. The hydrodynamic trap consists of an integrated microfluidic device with a cross-slot channel geometry where two opposing laminar streams converge, thereby generating a planar extensional flow with a fluid stagnation point (zero-velocity point). In this device, particles are confined at the trap center by active control of the flow field to maintain particle position at the fluid stagnation point. In this manner, particles are effectively trapped in free solution using a feedback control algorithm implemented with a custom-built LabVIEW code. The control algorithm consists of image acquisition for a particle in the microfluidic device, followed by particle tracking, determination of particle centroid position, and active adjustment of fluid flow by regulating the pressure applied to an on-chip pneumatic valve using a pressure regulator. In this way, the on-chip dynamic metering valve functions to regulate the relative flow rates in the outlet channels, thereby enabling fine-scale control of stagnation point position and particle trapping. The microfluidic-based hydrodynamic trap exhibits several advantages as a method for particle trapping. Hydrodynamic trapping is possible for any arbitrary particle without specific requirements on the physical or chemical properties of the trapped object. In addition, hydrodynamic trapping enables confinement of a "single" target object in concentrated or crowded particle suspensions, which is difficult using alternative force field-based trapping methods. The hydrodynamic trap is user-friendly, straightforward to implement and may be added to existing microfluidic devices to facilitate trapping and long-time analysis of particles. Overall, the hydrodynamic trap is a new platform for confinement, micromanipulation, and observation of particles without surface immobilization and eliminates the need for potentially perturbative optical, magnetic, and electric fields in the free-solution trapping of small particles.

Automated particle trapping is achieved using a linear feedback control algorithm implemented using a custom LabVIEW code. The LabVIEW code captures images from a CCD camera and transmits an electric potential (voltage) to a pressure regulator, which actively modulates the position (partially open/closed state) of an on-chip dynamic pneumatic valve. As the valve position changes, the hydrodynamic flow rate in one outlet line is adjusted, thereby re-positioning the stagnation point and enabling hydrodynamic trapping. The steps in the feedback loop are sequentially and iteratively executed at the rate of image capturing (10-60 Hz). The LabVIEW code executes the following steps during each feedback loop cycle: 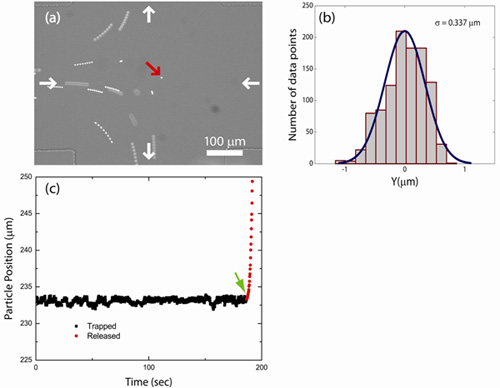 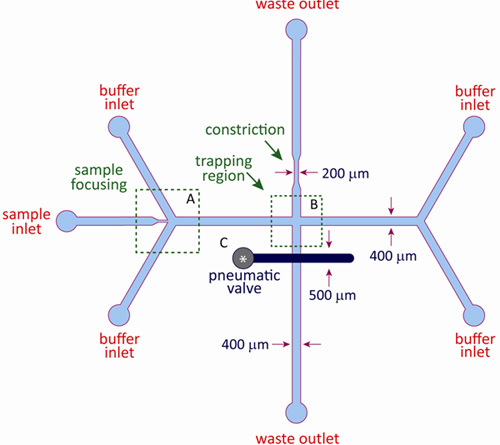 Figure 2: Schematic of microfluidic device for hydrodynamic trapping. The hydrodynamic trap is constructed using a two-layer microfluidic device. The fluidic layer consists of a sample inlet, four buffer inlets, and two waste outlets. The control layer consists of a pneumatic membrane valve situated on top of one of the outlet channels in the fluidic layer. A constriction in the opposing outlet channel provides an offset pressure for the pneumatic valve. Typical channel dimensions range between 100-500 μm. In region (A), sample inlet is flow focused by two buffer inlets. In region (B), opposing inlet streams converge at the cross-slot junction where trapping occurs. The pneumatic valve (C) is positioned on top of one of the outlet channels. The stagnation point position is modulated by regulating pressure to this valve.

Current microfluidic methods for particle manipulation based on hydrodynamic flow can be characterized as contact-based or non-contact methods. Contact-based methods use fluid flow to physically confine and immobilize particles against microfabricated channel walls 9, whereas non-contact methods rely on circulating flow or microeddies 10. In this work, we present a method for free-solution particle trapping using the sole action of fluid flow. The hydrodynamic trap enables confinement and manipulation of small particles at a fluid stagnation point in a microfluidic cross-slot device. In this device, an automated feedback control mechanism is used to confine particles by fine-scale and active adjustment of the stagnation point position in a flowing fluid.

What is the tightness of confinement for particles in the hydrodynamic trap and how can this be optimized? The accuracy of confining a particle to the trap center depends on the precision of centroid determination when localizing particle position. To achieve robust particle trapping, the user should ensure maximum image contrast between the particle and the background for optimal tracking and localization. In addition, special care should be taken to avoid bubbles or debris in the microchannels, which may affect particle tracking. A stable flow source should be used to minimize perturbations in fluid flow, as the stability of the stagnation point position is sensitive to flow fluctuations. Using this approach, hydrodynamic trap stiffness was measured to be ~1E-4 pN/nm for ~2 μm particles1, which is comparable to alternative methods including electrokinetic traps or optical tweezers. Micron-scale particles are confined to within 1 μm of the trap center for extended periods of time, which allows for precise positioning and manipulation of particles in free-solution. With further technology development, trapped particles may be transiently exposed to variable microenvironments when coupling the hydrodynamic trap with chemical gradients generated using laminar flow in microchannels. Finally, hydrodynamic trapping occurs at a stagnation point, where fluid convection tends to zero. In an ideal trap, particles are confined at a location of zero fluid velocity where particle motion is largely dominated by Brownian motion. From this perspective, the hydrodynamic trap is a non-pertubative method of trapping based on continuous fluid flow.

Hydrodynamic trapping and manipulation is readily achieved for any arbitrary "target" particle, given that the particle can be imaged, tracked, and localized using optical microscopy. Therefore, fluorescent and non-fluorescent particles and non-isotropic objects can be trapped without regard to the chemical/physical/optical nature of the trapped particle. In addition, the hydrodynamic trap can be easily integrated into existing soft lithography-based microfluidic systems without the need for complicated fabrication, patterning of electrodes or extensive optical setups. The hydrodynamic trap is a low-cost and user-friendly tool for particle trapping with minimal laboratory equipment requirements, including a microfluidic device, a pressure regulator, and a computer-based feedback controller. Overall, the hydrodynamic trap has the potential to transform fundamental and applied science studies of micro- and nanoscale particles.

We thank the Kenis group at the University of Illinois at Urbana-Champaign for helpful discussions and generously providing use of cleanroom facilities.

This work was funded by an NIH Pathway to Independence PI Award, under Grant No. 4R00HG004183-03 (Charles M. Schroeder and Melikhan Tanyeri).

This work was supported by the National Science Foundation through a Graduate Research Fellowship to Eric M. Johnson-Chavarria.