The ventricular cerebrospinal fluid (CSF) bathes the neuroepithelial and cerebral cortical progenitor cells during early brain development in the embryo. Here we describe the method developed to isolate ventricular CSF from rodent embryos of different ages in order to investigate its biological function. In addition, we demonstrate our cerebral cortical explant dissection and culture technique that allows for explant growth with minimal volumes of culture medium or CSF.

The CSF is a complex fluid with a dynamically varying proteome throughout development and in adulthood. During embryonic development, the nascent CSF differentiates from the amniotic fluid upon closure of the anterior neural tube. CSF volume then increases over subsequent days as the neuroepithelial progenitor cells lining the ventricles and the choroid plexus generate CSF. The embryonic CSF contacts the apical, ventricular surface of the neural stem cells of the developing brain and spinal cord. CSF provides crucial fluid pressure for the expansion of the developing brain and distributes important growth promoting factors to neural progenitor cells in a temporally-specific manner. To investigate the function of the CSF, it is important to isolate pure samples of embryonic CSF without contamination from blood or the developing telencephalic tissue. Here, we describe a technique to isolate relatively pure samples of ventricular embryonic CSF that can be used for a wide range of experimental assays including mass spectrometry, protein electrophoresis, and cell and primary explant culture. We demonstrate how to dissect and culture cortical explants on porous polycarbonate membranes in order to grow developing cortical tissue with reduced volumes of media or CSF. With this method, experiments can be performed using CSF from varying ages or conditions to investigate the biological activity of the CSF proteome on target cells.

The CSF is a complex fluid that bathes the developing neuroepithelium 1-6 and provides essential pressure 7 and growth promoting cues for the developing brain 8-12. To study the CSF over the course of brain development, we developed techniques to isolate ventricular CSF from developing rat or mouse embryos during various stages of development 6,9. Previous methods of isolation included using a glass micro-needle and isolating the CSF using a micro-injector 1,2. Our method utilizes a glass micro-capillary pipette whose tip has been pulled to create an ultrafine point for improved tissue penetration. The glass micro-capillary pipette is connected to an aspirator so that ventricular CSF collection can be controlled with gentle changes in pressure. To investigate the stem cell influences of CSF signals, we dissect cerebral cortical explants, place them on polycarbonate membranes, and float them on appropriate culture medium supplemented with CSF samples 9. With this technique, reduced volumes of media are sufficient to culture the tissue, allowing for an efficient use of CSF 9.

The CSF collection should yield a clear, transparent fluid. There should be no evidence of contamination from blood, as demonstrated by a red or yellow tinged fluid in the aspirate and in the Eppendorf tube. There should also be no evidence of tissue in the aspirate and Eppendorf tube. When the CSF is centrifuged, one can also assess the CSF microscopically to ensure that there is no contamination. If there are signs of contamination, the CSF should be discarded. From one E14.5 mouse litter, one can anticipate collecting 10-15 μl CSF. Table 1 depicts average volumes of CSF collected from average litter sizes in both mice and rats from various embryonic ages. When pure CSF samples have been collected, the CSF can be analyzed using a number of different techniques. Figure 3 shows a representative silver stained gel using 2ug of mouse E14.5 CSF.

Cerebral cortical explants can be grown with varying volumes of CSF plus a basal medium if necessary so that the total volume is 50 μl. Figure 4 shows representative explants grown with 50 μl of 100% embryonic CSF for 24 hr. The explants have been shown to survive and proliferate with 100% CSF and have tissue histology similar to rodent embryos at the same gestational age 9 , as indicated by immunoreactivity to phospho-histone H3 (PH3), a marker of cell division, along the ventricular surface, BrdU, a marker of DNA synthesis, incorporation along the ventricular zone, and Tuj1, a neuronal marker, in the developing cortical plate. 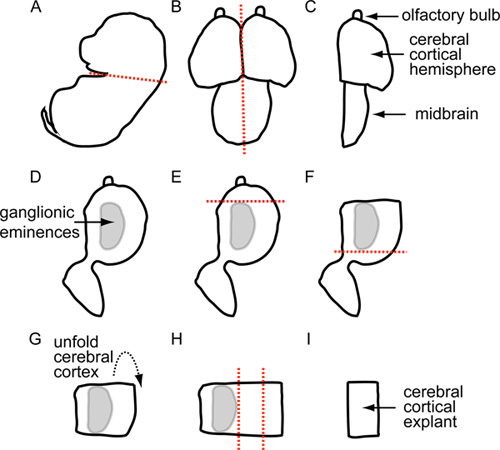 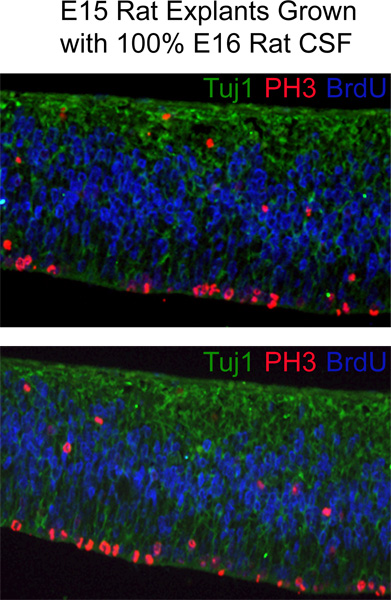 The described method for ventricular CSF collection has yielded relatively pure samples of embryonic CSF with stable protein composition and consistent activity in a number of cellular assays 9 . With a good collection technique and litter size of ten E14.5 mice, one can expect to collect 10-15 μl of CSF, and from a litter of E16 rats, one can expect to collect about 50-90 μl of CSF. This collection technique minimizes contamination from blood and tissue, by careful observation, centrifugation, and discarding of samples with any evidence of cellular debris or blood tinge. We have analyzed the fluid microscopically to assess for cellular debris or cells within the CSF after centrifugation, and found that samples that have no pellet after centrifugation are free from cellular contamination. In contrast to the proteome of the developing brain tissue or to samples of contaminated CSF (data not shown), using this method of CSF extraction, the CSF proteome did not contain any mitochondrial proteins when analyzed with a mass spectrometer 6 .

Based on the physical localization of the ventricular CSF within the telencephalic vesicles and neural tube, the only method of isolation is to pierce through the developing skin, skull, and telencephalon. Therefore, needle insertion through these tissues is a source for possible contamination. The tip of the needle should be as slender as possible, such that the needle can be inserted smoothly through the tissue and into the ventricle. The micro-capillary pipette may collect tissue within the bore of the needle during insertion of the needle into the ventricle. Depending on the age of the embryo, and if the choroid plexus has developed within the ventricle, it is important to not aspirate contents of the choroid plexus into the pipette. However, it is important to create sufficient negative pressure such that the CSF collects into the pipette, without disturbing the surrounding developing brain tissue or choroid plexus. The presence of tissue contamination can be visualized under the dissecting microscope, by pipetting CSF onto a glass slide with a glass cover slip and directly visualizing for cellular debris.

The methods we describe for CSF isolation provide relatively pure samples of CSF as we have determined to date. When known contaminated CSF samples have been analyzed using mass spectrometry, they have revealed the presence of mitochondrial proteins (data not shown). An inherent flaw in the technique is that the CSF is obtained by puncturing the developing skull and cortex, and therefore cells and tissue may be present in the CSF. By centrifuging the CSF, assaying for a pellet, and microscopically analyzing the CSF under the microscope, we have optimized a method for CSF isolation that yields relatively pure samples of CSF.

The technique for cerebral cortical explants was created to be able to grow explants with a reduced volume of media, given the limited quantities of embryonic CSF available for individual experiments. The smallest volume of medium used to grow explants reliably for 24 hr was 50 μl. Occasionally, explants were cultured for longer than 24 hr, with the longest period being 72 hr. With longer experiments, it is best to supplement the growth media every 24 hr. Once the explants are cultured for the desired period of time, the explants can be used for a number of various assays including immunofluoresence, generating neurospheres, cell death, or RNA extraction.

We are grateful for support from the NIH (Award numbers R00 NS072192 to M.K.L., HD029178 to A-S.L., and 2 RO1 NS032457 to C.A.W.). M.K.L. is the recipient of the Children's Hospital Boston Career Development Fellowship/Harvard Medical School Shore Fellowship and a Fellow of the Alfred P. Sloan Foundation. C.A.W. is an Investigator of the Howard Hughes Medical Institute.