Genetic Inducible Fate Mapping (GIFM) marks and tracks cells with fine spatial and temporal control in vivo and elucidates how cells from a specific genetic lineage contribute to developing and adult tissues. Demonstrated here are the techniques required to fate map E12.5 mouse embryos for epifluorescent and explant analysis.

Fate maps are generated by marking and tracking cells in vivo to determine how progenitors contribute to specific structures and cell types in developing and adult tissue. An advance in this concept is Genetic Inducible Fate Mapping (GIFM), linking gene expression, cell fate, and cell behaviors in vivo, to create fate maps based on genetic lineage.

GIFM exploits X-CreER lines where X is a gene or set of gene regulatory elements that confers spatial expression of a modified bacteriophage protein, Cre recombinase (CreERT). CreERT contains a modified estrogen receptor ligand binding domain which renders CreERT sequestered in the cytoplasm in the absence of the drug tamoxifen. The binding of tamoxifen releases CreERT, which translocates to the nucleus and mediates recombination between DNA sequences flanked by loxP sites. In GIFM, recombination typically occurs between a loxP flanked Stop cassette preceding a reporter gene such as GFP.

Mice are bred to contain either a region- or cell type-specific CreER and a conditional reporter allele. Untreated mice will not have marking because the Stop cassette in the reporter prevents further transcription of the reporter gene. We administer tamoxifen by oral gavage to timed-pregnant females, which provides temporal control of CreERT release and subsequent translocation to the nucleus removing the Stop cassette from the reporter. Following recombination, the reporter allele is constitutively and heritably expressed. This series of events marks cells such that their genetic history is indelibly recorded. The recombined reporter thus serves as a high fidelity genetic lineage tracer that, once on, is uncoupled from the gene expression initially used to drive CreERT.

We apply GIFM in mouse to study normal development and ascertain the contribution of genetic lineages to adult cell types and tissues. We also use GIFM to follow cells on mutant genetic backgrounds to better understand complex phenotypes that mimic salient features of human genetic disorders.

Micro-dissection and explant preparation of the ventral mesencephalon from E12.5 embryos

In this GIFM experiment, Wnt1-expressing cells are permanently and heritably marked during embryogenesis by administering tamoxifen at E8.5 to Wnt1-CreERT;mGFP embryos. Subsequently, these marked cells are visualized via whole mount fluorescence and section immunohistochemistry to determine how Wnt1-derived cells contribute to neural structures across development. Whole mount fluorescence relies on the membrane bound GFP component of the mGFP reporter and therefore provides cellular information as well as an overarching view of Wnt1-derived neural projections. For example, with tamoxifen administration at E8.5, Wnt1-CreERTmGFP embryos at E12.5 exhibit GFP fluorescence primarily in the midbrain, posterior hindbrain and spinal cord (Figure 1A). At high magnification, fine neuronal projections are seen innervating the midbrain, body wall, limb, and craniofacial region. At this developmental stage, the embryo is translucent and internal GFP labeling is easily discerned. However, as the brain develops, the density of mature tissue obscures GFP fluorescence emanating from internal brain structures. Therefore, with tamoxifen administration at E8.5, only minor GFP labeling is observed in the superior colliculi of the adult by whole mount fluorescence (Figure 1C, inset). In addition, some axonal projections are seen coursing along the ventral surface of the hindbrain (not shown). In contrast, when tamoxifen is administered at E9.5, substantial GFP labeling occurs throughout the entire inferior colliculi (Figure 1B, inset). This increase in whole mount fluorescence may indicate that Wnt1-expressing cells at E9.5 contribute more significantly to superficial regions of the dorsal midbrain or extend more processes within this region than Wnt1 expressing cells from E8.5. Regardless, this difference in whole mount fluorescence reflects the dynamic nature of Wnt1 expression during development and demonstrates how GIFM can be used to follow distinct cell populations from the embryo into the mature adult. 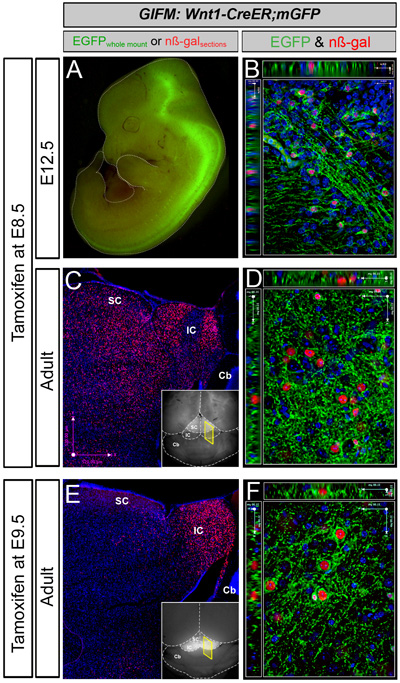 The GIFM system that we have demonstrated can be used to answer a wide range of questions in a variety of cellular processes. For example, mice engineered with different Cre drivers can be used to target any cell type, tissue or genetic lineage of interest. In addition, because tamoxifen can be administered at any embryonic or postnatal time point, recombination can be targeted to any relevant developmental stage. The spatial and temporal control of this system are ideal for investigating how cells expressing particular genes contribute to a structure or region of interest as well as cell migration and patterning events during development.

In addition to simply marking and visualizing cells by immunohistochemistry (Figure 1), GIFM methodology can be used for a variety of applications. By combining GIFM with a conditional knock-out allele, genetic loss-of-function can be temporally and spatially targeted to relevant cell populations, which are simultaneously marked with a reporter allele. Alternatively, tissue collected from fate mapped animals can be used in combination with Fluorescence-Activated Cell Sorting (FACS) to physically isolate cells expressing reporter genes or particular markers into distinct populations. Marked tissues isolated during embryogenesis or from adult animals can be cultured, allowing the delivery of drugs or genetic constructs to defined lineages in vitro.

Our lab uses the results obtained from GIFM studies to help answer complex questions posed by neurological diseases, such as Parkinson s disease, schizophrenia, autism and tuberous sclerosis. By understanding which populations of cells are affected in each of these diseases and how these populations change over time in mouse models, we hope to better understand the pathology observed and even pose possible means of treatment in clinical settings.

All authors contributed equally to this work and are listed alphabetically. The contribution of each individual is apparent by his or her participation in the video article.

We are grateful to S. Arber for the mGFP mice and to members of the Zervas lab who critically read the paper and provided technical assistance. A. Brown was supported by a Brain Science Kaplan Summer Graduate Research Award. E. Normand was supported by a Brain Science Program Graduate Research Award. This research was also funded by startup research funds (MZ). 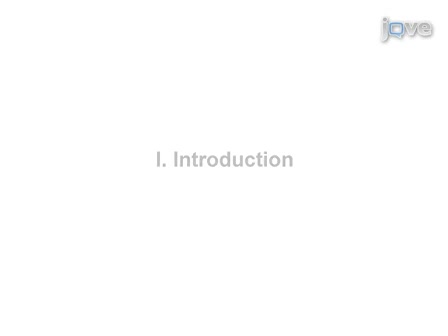