Extensive research has focused on the neurotransmitter dopamine because of its importance in the mechanism of action of drugs of abuse (e.g. cocaine and amphetamine), the role it plays in psychiatric illnesses (e.g. schizophrenia and Attention Deficit Hyperactivity Disorder), and its involvement in degenerative disorders like Parkinson's and Huntington's disease. Under normal physiological conditions, dopamine is known to regulate locomotor activity, cognition, learning, emotional affect, and neuroendocrine hormone secretion. One of the largest densities of dopamine neurons is within the striatum, which can be divided in two distinct neuroanatomical regions known as the nucleus accumbens and the caudate-putamen. The objective is to illustrate a general protocol for slice fast-scan cyclic voltammetry (FSCV) within the mouse striatum. FSCV is a well-defined electrochemical technique providing the opportunity to measure dopamine release and uptake in real time in discrete brain regions. Carbon fiber microelectrodes (diameter of ~ 7 μm) are used in FSCV to detect dopamine oxidation. The analytical advantage of using FSCV to detect dopamine is its enhanced temporal resolution of 100 milliseconds and spatial resolution of less than ten microns, providing complementary information to in vivo microdialysis.

Three types of artificial cerebrospinal fluid (aCSF) solutions need to be prepared in advance, all in ultrapure (18 MΩ cm) water.

While the slices are incubating, the slice recording chamber can be prepared.

Resulting current versus time traces obtained from the slice can be fit by nonlinear regression to a set of Michaelis-Menten based equations, as described by Wightman and colleagues in software written in LabVIEW (National Instruments, Austin, TX) 4-6. In this software, current versus time traces can be fitted by varying two parameters, Vmax (nM/s; corresponding to the rate of uptake by the dopamine transporter as demonstrated by the descending phase of the trace) and dopamine concentration per pulse (nM; corresponding to the peak height maximum). The Km value, reflective of the affinity of dopamine for the dopamine transporter, is set to 160 nM and not changed. The electrode's post-calibration factor that is determined after the experiment is required prior to fitting. The LabView software contains the coefficient of determination (R2) parameter to determine the goodness of fit (R2 values > 0.8 are used).

FSCV was used to examine single-pulse, electrically stimulated dopamine release and uptake in the caudate-putamen (CPu), nucleus accumbens (NAc) core, and NAc shell in mice. Representative results shown in Figure 1A demonstrate current (or concentration) versus time plots. The red arrow indicates when electrical stimulation is applied to the slice followed by a corresponding rise in the amount of current attributable to changes in dopamine concentration at the carbon fiber microelectrode. The predominant process during electrical stimulation is dopamine release, but other processes such as uptake and diffusion contribute to the overall observed peak height as well. The descending phase of the peak is mainly attributed to reuptake of the neurotransmitter by its transporter since neuronal stimulation has been stopped 7. However, the peak decay is not limited to reuptake, as diffusion and metabolism also contribute to the decrease in current. It has been postulated that since the time scale of electrochemical measurements is a matter of seconds, FSCV is too fast to measure contributions from metabolism 7. In these current versus time traces, the y-axis is converted to concentration (μM) using the post-experiment calibration factor. The inset for Figure 1A is the respective background subtracted cyclic voltammograms for the current versus time traces. Plotting the measured current (y-axis) against the applied potential to the electrode (x-axis), dopamine is chemically identified with an observed oxidation peak at +0.6 V and a corresponding reduction peak of dopamine-ortho-quinone is observed at -0.2 V versus a Ag/AgCl reference electrode. The third representation of the data uses a three-dimensional pseudo-color plot (Figure 1B) combining the information from both the current versus time traces and the cyclic voltammogram to form a single plot. In the representative pseudo-color plot, time is plotted in seconds along the x-axis, the applied voltage to the carbon fiber working microelectrode is graphed along the y-axis, and current is represented as false color along the z-axis. Due to the small size of carbon fiber microelectrodes (~ 7 μm in diameter), electrically stimulated dopamine dynamics can be detected in discrete anatomical regions of the striatum (CPu versus NAc core versus NAc shell; Figure 2).

An advantage of using striatal coronal slices is that it eliminates contributions from the dopamine cell bodies, and allows for an investigation of presynaptic dopamine dynamics. Presynaptic control of dopamine release and uptake is not strictly limited to dopamine autoreceptor or transporter functions as others have shown 16, 17. Heteroreceptors of other neurotransmitter systems also modulate dopamine dynamics 18, 19. Representative current versus time traces shown in Figure 3A demonstrate that when slices are treated with 1 μM quinpirole (D2/D3 receptor agonist) for 30 minutes, a decrease in electrically-evoked dopamine release is observed. On the other hand, when a substrate for the dopamine transporter, such as methamphetamine, is perfused over the slice for 30 minutes, no difference in dopamine release is observed (Figure 3B). The peak decay is shifted to the right, which is typically associated with alterations in dopamine transporter kinetics (Km) 3. Finally, Figure 3C is a representative trace of the current versus time trace once the slice has been bathed in a 100 ng/mL brain-derived neurotrophic factor (BDNF) solution, which has been hypothesized to influence dopamine release dynamics 20, 21. From this representative trace, it can be seen that BDNF has the ability to enhance electrically-evoked dopamine release. Taken together, these pharmacological treatments emphasize the utility of FSCV to probe dopamine dynamics within the striatum.

The primary limitation of using brain slices to investigate presynaptic dopamine dynamics by FSCV is that the neurocircuitry from an intact brain is lost. With slice FSCV it is impossible to study the effects of neurotransmitters from other brain regions, making it difficult to understand contributions of these systems on the functionality of the region being investigated (e.g. the striatum) or to evaluate non-stimulated dopamine levels. However, recent technical advances in FSCV has allowed for dopamine transient measurements (with and without electrical stimulation) in freely moving rats in response to a pharmacological manipulation, self-administration, or novelty 22 - 24. Overall, slice FSCV provides valuable information on presynaptic dopamine dynamics, and coupling slice FSCV results to complementary neurochemical techniques such as microdialysis, electrophysiology, and/or freely moving FSCV offers a more comprehensive view of neurotransmitter functioning in the brain.

Figure 1. Electrically-evoked dopamine release measured using FSCV following single-pulse stimulation in dorsal CPu slices from C57Bl/6J mice. (A) The concentration versus time trace in which dopamine release was evoked by a single pulse (red arrow). The single asterisk represents the factors that contribute to the rise in concentration, which is predominantly dopamine release, but uptake and diffusion also contribute. The double asterisk represents the peak signal returning to baseline, mainly due to uptake but also diffusion contributes. Inset displays the corresponding cyclic voltammograms. (B) Representative color plots from the dorsal CPu display time (x-axis), applied potential to the carbon fiber microelectrode versus Ag/AgCl reference electrode (y-axis), and current in pseudo-color. 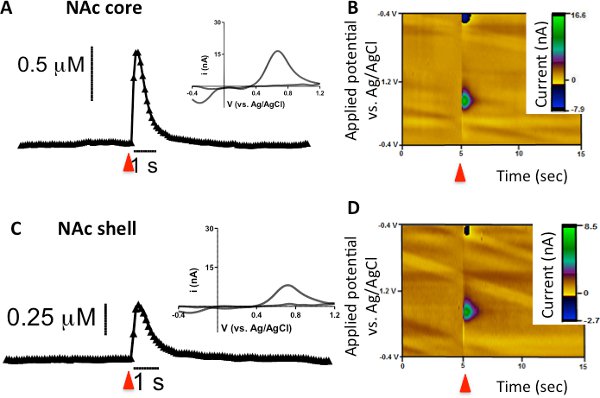 The protocol presented here demonstrates how to prepare and use mouse coronal brain slices for FSCV experiments. Although this method is specific to obtaining and measuring dopamine dynamics, other neurotransmitters such as adenosine, hydrogen peroxide, norepinephrine, and serotonin have been monitored in vivo or in vitro with FSCV 3, 8 - 11. FSCV can be used to monitor some of these other neurochemicals by simple modifications of the waveform applied to the working electrode 3, 11. Since many of these neurochemical species have similar oxidation potentials, the cyclic voltammograms generated provide a unique chemical fingerprint for each oxidizable species, which allows chemical identification. Furthermore, FSCV has been used in various species, from fruit flies to non-human primates, to gain a better understanding of neurotransmission in these model organisms 12 - 15. One of the primary reasons that FSCV has been used in such a variety of species is due to the small diameter of the carbon fiber microelectrodes, typically less than 7 μm in diameter. As a result, these microelectrodes make it possible to sample tissue from very small environments, as in the case of the fruit fly brain (nL), or to discriminate from discrete sub-anatomical regions like the NAc core versus the shell in larger species 12-14.

In conclusion, the results presented here demonstrate that slice voltammetry is an invaluable electrochemical tool to probe presynaptic dopamine dynamics in the mouse striatum. The representative data focuses on perfusing pharmacological agents over a brain slice from a 'normal or healthy' control and the ability to characterize parameters of dopamine release and uptake. Furthermore, FSCV can be used to evaluate differences in electrically-stimulated release and uptake parameters in genetically modified or treated animals on their own or after pharmacological treatment 15 - 16. Slice FSCV provides a unique opportunity to investigate dopamine neurotransmission dynamics within discrete anatomical regions that occur on a timescale of milliseconds. Overall, the electrochemical technique of FSCV provides both enhanced spatial and temporal resolution compared to other neurochemical techniques.

Funding provided by the National Institute on Alcohol Abuse and Alcoholism (NIAAA; AA-016967 and AA016967-01S1; TAM), Wayne State University start up funds, and Wayne State University Research Grant Program. The content is solely the responsibility of the authors and does not represent the official views of NIAAA or the National Institutes of Health.