A method for the atom transfer radical polymerization of functionalized vinyl monomers using perylene as a visible-light photocatalyst is described.

A standardized technique for atom transfer radical polymerization of vinyl monomers using perylene as a visible-light photocatalyst is presented. The procedure is performed under an inert atmosphere using air- and water-exclusion techniques. The outcome of the polymerization is affected by the ratios of monomer, initiator, and catalyst used as well as the reaction concentration, solvent, and nature of the light source. Temporal control over the polymerization can be exercised by turning the visible light source off and on. Low dispersities of the resultant polymers as well as the ability to chain-extend to form block copolymers suggest control over the polymerization, while chain end-group analysis provides evidence supporting an atom-transfer radical polymerization mechanism.

The synthesis of technologically advanced polymers requires precise control over polymer molecular weight, dispersity (Ð), composition, and architecture.1,2 Controlled radical polymerizations (CRPs)3-8 have revolutionized the synthesis of well-defined polymers, with atom transfer radical polymerization (ATRP) being the most used CRP, largely due to operational simplicity and synthetic versatility.9-14 The crux of ATRP is the ability to reversibly deactivate the polymerization, controlling the equilibrium between a propagating radical and a dormant species. Enforcing a low concentration of active radicals greatly minimizes bimolecular termination pathways and allows for the synthesis of well-defined polymers.

Traditional ATRP relies on a transition metal catalyst to mediate this equilibrium.3 These metal catalysts contaminate the polymer product and impede implementation in biomedical or electronic applications while also raising environmental concerns. Although significant strides have been made to reduce the catalyst concentration to ppm levels, these methodologies require more demanding experimental conditions and metal contamination is still not entirely eliminated.15,16

Reversible addition-fragmentation transfer17,18 and nitroxide-mediated polymerizations19,20 are CRPs that do not require metal catalysts, although they have been used less often than ATRP.3 Recently, reversible chain-transfer21 and reversible complexation22,23 variants of ATRP that can use organic catalysts were reported. However, these methodologies require the use of alkyl iodide initiators and are not effective with the alkyl bromides commonly employed in ATRP. A highly desirable CRP would match the performance, feasibility, and robustness of traditional ATRP while being catalyzed by an organic catalyst under mild conditions.

Here, we describe a methodology for the radical polymerization of functionalized vinyl monomers using perylene as a visible-light photocatalyst. Through optimization of parameters such as stoichiometry, concentration, time, and light flux, the molecular weight of the polymers can be controlled.24, 25 Similar methodologies have been recently introduced using phenothiazine derivatives as photocatalysts for metal-free ATRP.26, 27 Because researchers in the field of polymerization catalysis are constantly developing new catalytic systems, the ability to compare catalyst performance across a number of metrics is vital. This ability to make comparisons relies heavily upon procedural consistency and clarity on the part of the researchers performing the experiments. As such, it is our goal that this video will be used to help precisely communicate the methods by which these polymers are synthesized and characterized.

CAUTION: Many of the chemicals used in this protocol are hazardous substances. Consult Material Safety Data Sheets (MSDS) and use appropriate personal protective equipment (PPE) when working with these substances.

1. Purification, Preparation, and Storage of Reagents

2. Photopolymerization of Methyl Methacrylate Using Perylene as the Photocatalyst

3. Kinetic Analysis of the Reaction

4. Isolation and Purification of the Product Polymer

Table 1 shows the range of polymerization results achievable through this method. These data show that perylene is capable of serving as a photocatalyst for the polymerization of a number of functionalized vinyl monomers. For a specific monomer, adjustment of any of a number of reaction parameters such as solvent, stoichiometry, initiator, and light source leads to polymers with varying molecular weights and dispersities ranging from very good to rather broad. Figure 1 shows the results of chain-extension experiments as described in Part 4, and demonstrates that polymers formed using this method are capable of serving as macroinitiators for continued polymerization and formation of block (co)polymers. These results together support the conclusion that, under the correct conditions, perylene facilitates an atom transfer radical polymerization using visible light. 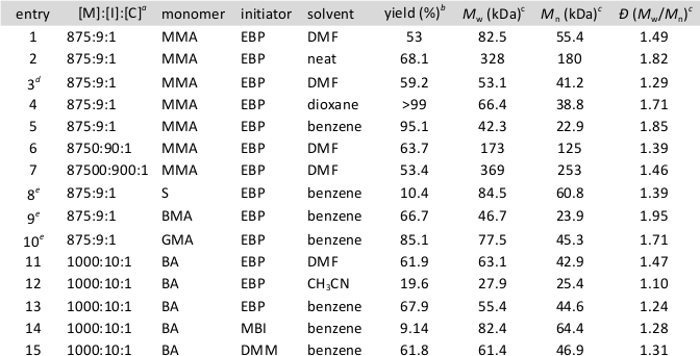 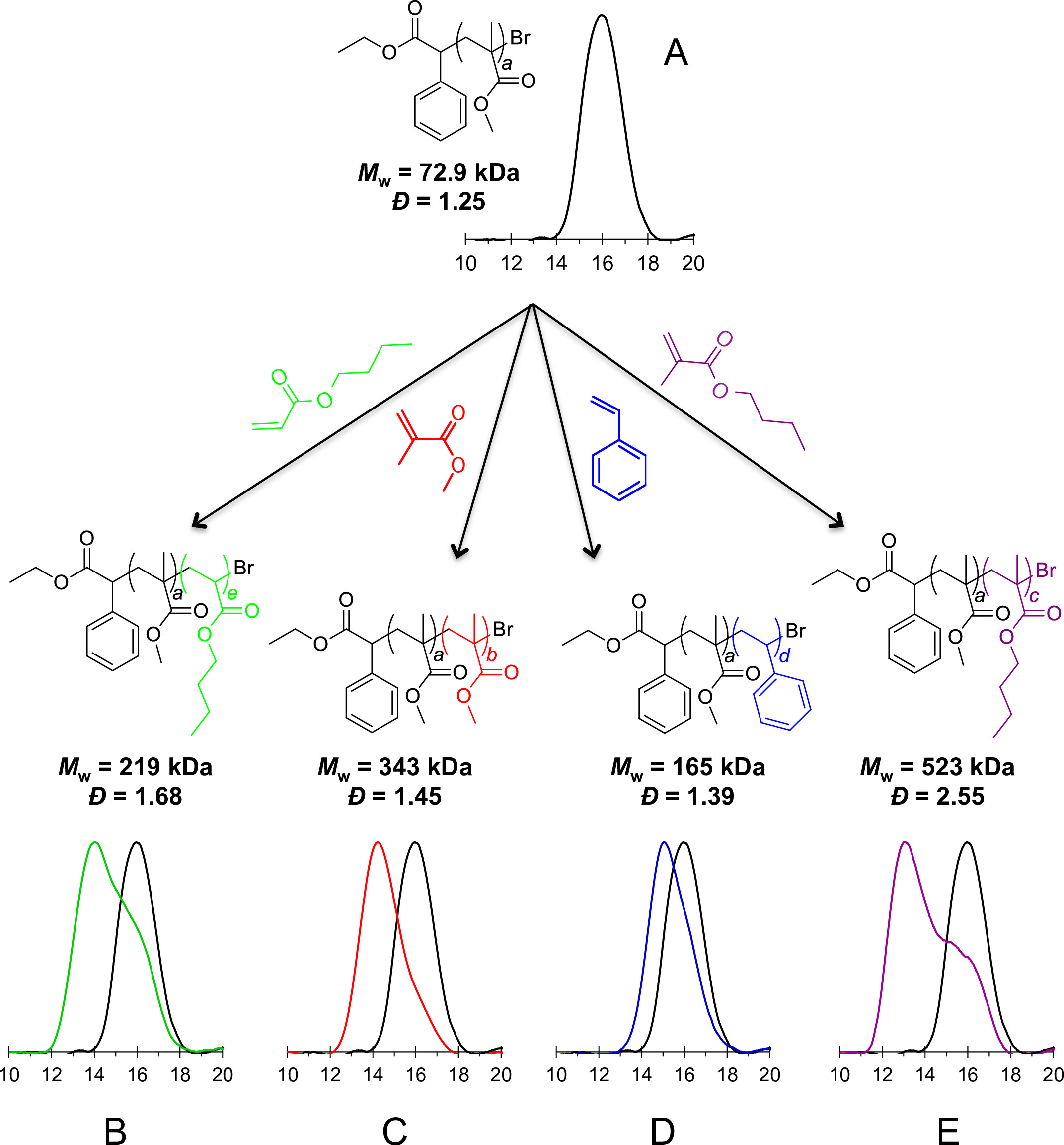 Although the protocol demonstrates a specific example of this polymerization technique, the options available to the researcher performing this reaction are quite broad. Modifications can be made at a number of points throughout the protocol to allow for the optimization of whatever particular photoredox ATRP is being performed. As new monomers, initiators, and catalysts for this reaction come under investigation, the stoichiometry and solvent used to perform the reaction can and should be modified as part of optimization of reaction conditions. Additionally, individual experimenters may choose to use Table 1 as a guideline to modify other parameters such as reaction concentration, light source (whether LED or natural sunlight), and temperature in order to tune the reaction to the exact results desired.

The limitations of this methodology are similar to other, related polymerizations. The reaction is sensitive to oxygen, so rigorous purification of each reaction component is necessary. If the results of this procedure are not found to be consistent, contamination of the reagents is the most likely suspect. Always ensure that all reagents are purified, prepared, and stored as described in Part 1. Additionally, the purification process in Part 3 may need to be modified when synthesizing different polymers according to the solubility profile of the particular polymer. Finally, it is important to note that conventional, uncontrolled radical polymerization can occur if the light flux or temperature is too high. This issue may be indicated by a bimodal molecular weight distribution and/or high values of Đ (> 2.0). It is recommended to use a fan to keep the temperature in the glovebox as close to room temperature as possible. If the light flux is suspected to be too high, it is recommended to either reduce the number of LEDs used or to reduce the voltage supplied to the LEDs. Additional experiments are currently underway to precisely determine the optimal luminous flux range to ensure control over the polymerization.

The results show that perylene is capable of mediating radical polymerization of a number of functionalized vinyl monomers via an oxidative quenching pathway. Control experiments, in which either the catalyst, initiator, or light source was withheld, showed that all three of these components are required for the polymerization to proceed. Additional control experiments also show that the use of air-exclusion techniques (in this case, a glovebox) is necessary, as the presence of oxygen does not allow polymerization to occur. A pulsed-light sequence showed that the polymerization can be halted and resumed by turning the light source off and back on, allowing for temporal control over the reaction. Support for a reversible-deactivation atom transfer mechanism is found through chain extension experiments such as those in Figure 1. When coupled with the relatively low Đ values which can be found in Table 1, there is evidence that this polymerization is an example of photoredox organocatalyzed ATRP, among the first of its kind.

As this new type of ATRP continues to develop and expand, there will be a need to design, test, and optimize many new potential catalysts for the reaction. Such future work will be easiest to interpret when there is consistency and transparency in the methods used to study these reactions. Here, we have communicated the method by which we employ and evaluate organocatalysts for visible light-mediated atom transfer radical polymerization.

The authors would like to acknowledge the University of Colorado Boulder for its support of this work.