We describe an optical system for the generation of unconditional polarization-entangled photons based on multiple quantum interference effects with a detection scheme to estimate the experimental fidelity of generated entangled photons.

The entangled state of photons has attracted considerable interest in the study of local realism in quantum theory and novel applications of quantum cryptography1, quantum dense coding2, quantum repeater3, and quantum teleportation4. Spontaneous parametric down-conversion (SPDC) is a second-order nonlinear process that has been introduced to directly produce entangled photon pairs in the polarization states. Owing to the recent development in quasi-phase-matching techniques, the periodically poled KTiOPO4 (ppKTP) and LiNbO3 (ppLN) have become a standard technique5. Several types of entanglement sources are developed by combining these nonlinear crystals with a Sagnac interferometer6,7,8. In particular, the scheme with orthogonally polarized photon pairs obtained by type-II SPDC makes it possible to generate unconditional polarization-entangled photons and also separate degenerated polarization-entangled photon pairs into different optical modes without postselective detection7.

In contrast, type-0 SPDC has the advantage of a simple setup and a high-emission ratio of photon pairs9. Moreover, the generated photon pairs in type-0 SPDC show a much broader bandwidth than the photons of type-II SPDC. The total photon-pair production rate per unit pump power is two orders of magnitude higher due to its large bandwidth8. A large bandwidth of correlated photon pairs allows a very short coincidence time between the detected photon pairs. This property has led to several potential applications such as quantum optical coherence tomography10, for achieving ultrashort temporal correlations through nonlinear interactions with the flux of entangled photons11, metrology methods using the very narrow dip in quantum interference12, quantum clock synchronization13, time-frequency entanglement measurement14, and multimode frequency entanglement15. However, the scheme with ordinary type-0 SPDC requires conditional detection schemes6 or wavelength filtering8 or spatial-mode filtering to separate the generated polarization-entangled photons16.

We realized a scheme that satisfies the properties of both type-0 and type-II SPDC simultaneously based on multiple quantum interference processes17. The details of the optical system were described and experimentally used to measure the parameters that characterize the generated polarization-entangled photons using a minimum number of experimental data.

The operating principle of the scheme is shown in Figure 1a-e. The laser is injected into a polarization Sagnac interferometer comprised of a polarizing beam splitter (PBS), two half-wave plates set to 45o (HWP1) and 22.5o (HWP2), a ppKTP crystal, and mirrors. The polarization optics with this setup work for both the wavelength of the pump laser field and down-converted photons.

The down-converted photon pairs are H-polarized through the HWP1 set to 45o as shown in Figure 1b, and the polarization state becomes:

is the relative phase between the photon pair from the first and second SPDC. The phase does not vary with time because it is determined by the HWP1's material dispersion between the pump laser and the down-converted photons, and adjustable by tilting HWP1. The H (V)-polarization state of the down-converted photons was inverted to A (D) state as shown in (1). The polarization state of the output photon pair from HWP2 is represented as:

is set by tilting HWP1, only the first term of the state (5) remains as shown in Figure 1d. This is the quantum interference process that corresponds to the reverse Hong-Ou-Mandel (HOM) interference process of the polarization bases19. When the H-photon passes through PBS and the V-photon is reflected by PBS, the polarization state of the output photon pairs from PBS is represented as

for optical mode1 and 2 as shown in Figure 1e.

Conversely, the V-component of the pump laser was reflected by PBS as shown in Figure 1f and round tripped in a counter-clockwise (CCW) direction. Through similar multiple type-0 SPDC processes and unitary transformations, the polarization state of the output from PBS becomes

The output state is a polarization-entangled state known as one of the Bell states and can be converted to other three states using the polarization optics elements7. Using the relation shown in (1), the output state

can be represented by diagonal polarization bases as:

and by circular polarization bases as:

The adopted procedure comprises four main stages using the overall experimental setup shown in Figure 2. The first stage was the preparation of the pump laser for SPDC. In the second stage, the optical interferometer - Sagnac interferometer was constructed using a nonlinear crystal and optical polarization components. The coincidence measurement procedure using the electrical components shown in Figure 3 was described in the third stage. Finally, the actual photon correlation data shown in Figure 4 was used to estimate the fidelity and Bell parameters of the generated unconditional polarization-entangled photons.

1. Configuration of the pump laser

2. Construction of the interferometric setup

3. Measurement procedure of the coincidence count

4. Estimation procedure of the Fidelity and Bell parameters

The optical system to generate unconditional entangled photons for polarization states based on multiple quantum interferences and detection schemes to estimate the experimental fidelity by polarization correlation of generated photon pairs was discussed. The estimated fidelity of the generated photons exceeded the classical local correlation limit of 0.50. The measured Bell parameters exceeded the classical parameter limit of 2 and violated the Bell inequality. In this paper, coincidence measurements obtained from a minimum of six combinations of polarization bases were used to evaluate these parameters. Furthermore, it is possible to completely reconstruct the density matrix of the generated polarization-entangled photons via quantum state tomography, which requires coincidence measurements of 16 combinations of polarization bases18. 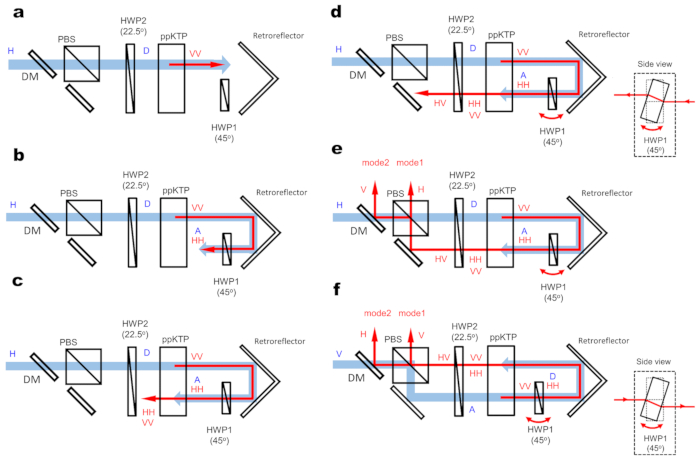 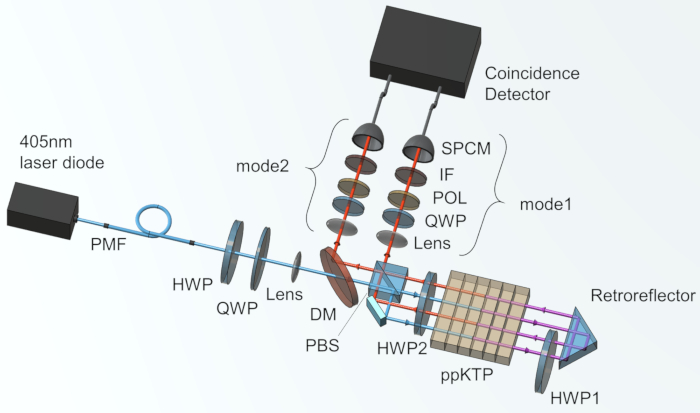 Figure 2:Overall optical system for generating unconditional polarization-entangled photons. The first half-wave plate (HWP) and a quarter-wave plate (QWP) are used to set the polarization state of the pump laser passing through polarization-maintaining optical fiber (PMF). The output photons were passed through lenses, QWPs, polarizers (POLs), and interference filters (IFs) in modes 1 and 2, and detected by the single-photon counting modules (SPCM). Please click here to view a larger version of this figure. 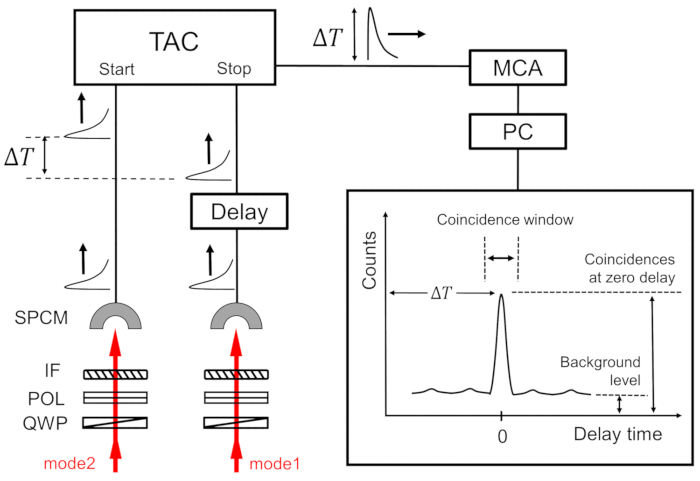 Figure 3: Overall coincidence detection system for the generated polarization-entangled photons. The electrical signals from the SPCM were used to start and stop the signal of the time-to-amplitude converter (TAC) through an electrical delay line (Delay). The pulse height distribution obtained from time difference was analyzed with a computer controlled (PC) multi-channel analyzer (MCA). Please click here to view a larger version of this figure. 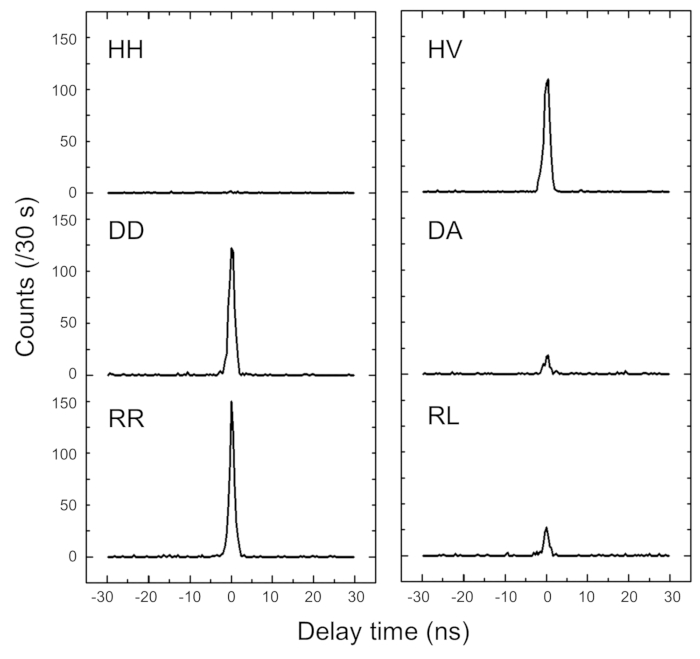 The critical step within the protocol is how to maximize the fidelity of the generated polarization entangled photons. The estimated fidelity and Bell parameters are currently limited, mainly because we used multimode fibers to collect the generated entangled photons. The tilting of HWP1 affected the height difference of the spatial modes between the photons of the first and second SPDC and caused a spatial-mode mismatch on the output of the Sagnac interferometer. The fidelity is expected to be higher when using single-mode fibers that filter out the spatial-mode-overlapping area of the generated first and second SPDC photons. Moreover, the birefringence effect of the ppKTP crystal affected the mode mismatch between the first and second SPDC photons. In future, we can possibly improve the parameters by using additional compensation crystals.

This research was supported by Research Foundation for Opto-Science and Technology, Japan. We thank to Dr. Tomo Osada for the useful discussions.