This article presents a protocol for the synthesis of bis(thiourea) cadmium chloride crystals by chemical bath deposition. Two experiments are described: one aided by ultraviolet light compared to one without ultraviolet light.

In this work, the effects on the preparation of bis(thiourea) cadmium chloride crystals when illuminated with ultraviolet (UV) light at a wavelength of 367 nm using the chemical bath deposition technique are studied comparatively. Two experiments are performed to make a comparison: one without UV light and the other with the aid of UV light. Both experiments are performed under equal conditions, at a temperature of 343 K and with a pH of 3.2. The precursors used are cadmium chloride (CdCl2) and thiourea [CS(NH2)2], which are dissolved in 50 mL of deionized water with an acidic pH. In this experiment, the interaction of electromagnetic radiation is sought at the moment the chemical reaction is carried out. The results demonstrate the existence of an interaction between the crystals and the UV light; the UV light assistance causes crystal growths in an acicular shape. Also, the final product obtained is cadmium sulfide and shows no evident difference when synthesized with or without the use of UV light.

An important area of research is single crystals; their growth is aimed at different applications. These can be used as non-linear optical materials applied in the areas of laser technology, in the field of optoelectronics, and for the storage of information1, which provides an area of opportunity for their investigation. Bis(thiourea) cadmium chloride is a metal-organic material and can be synthesized from two precursors, thiourea and cadmium chloride, obeying the following chemical formula: 2CS(NH2)2 + CdCl2 CdCl2-[CS(NH2)2]2. This metal-organic material has been prepared under different reaction conditions, such as temperature and pH, but never with the assistance of ultraviolet (UV) light.

The influence of pH on the structure of the crystal has been reported; at a pH < 6, it is possible to obtain the formation of monocrystals. These, in turn, are modified depending on the pH range. At an interval of 6 to 4, it is possible to obtain hexagonal structures, for if pH is < 4, an orthorhombic crystalline structure is obtained2. The ion dissociation is promoted by the acidic pH Cd2+ and Cl- since it prevents cadmium hydroxide formation [Cd(OH)2]. This stabilizes the cadmium: a cadmium atom joins with two sulfur-free radicals and two chlorines.

Here, the synthesis is carried out using the chemical bath deposition technique (CBD), controlling the different conditions that intervene at the time of the chemical reaction3. In CBD, the factors that control the chemical reaction are the following: the solution temperature, the precursor ions, the solution pH, the number of reagents, and the agitation speed, to name a few. On the other hand, the compared technique used here is called photochemical bath deposition (PCBD) because it uses UV light assistance. There have been reports in which UV light assistance has been used to synthesize films of CuSx4,5, ZnS6, CdS7, and InS8, among others. Ichimura and Gunasekaran9 present in their work that sulfate solutions have an absorption edge close to 300 nm. Due to this absorption range, ultraviolet radiation is applied, which results in a similar emission range to that of the absorbed solutions.

Another property of bis(thiourea) cadmium chloride is its degradation when heated. It exhibits an initial decomposition at temperatures of 512 K and above, forming cadmium sulfide (CdS). The degradation reaction is as follows: [Cd(CS[NH2])2]Cl2 → Δ CdS + HNCS + NH3 + NH4SCN. This degradation generates thiocyanuric acid and various thiocyanates10,11. Also, in the research group, some effects caused by the UV radiation were studied12. Last, in this work, a comparative synthesis procedure for bis(thiourea) cadmium chloride crystals is described, as well as the effects of UV light.

CAUTION: The chemicals used in this protocol are toxic and carcinogenic; thus, the safety recommendations and procedures must be followed carefully. Wear proper protective equipment and consult any relevant materials safety data sheet (MSDS).

4. Calcination of the Crystals to Obtain CdS

The UV-Vis diffusion's reflectance absorption spectra in both precursor solutions, A and B, show the existence of a bis(thiourea) cadmium chloride complex—CdCl2-(CS(NH2)2)2. This is evidenced by a broad absorption band within the range of 250 - 500 nm in Figure 2c. In turn, Figure 2c is the combination of the main absorption bands of the isolated CdCl2 and CS(NH2)2 in the solution as shown in Figure 2a and 2b, respectively. In addition, a secondary band in the range of 600 - 700 nm is notably visible in both reactants' (Figure 2a and 2b) spectra, and it is not detectable in the complex's UV-Vis absorption spectrum (Figure 2c). This latter feature is also determinant to assign Figure 2c as an example of the characteristic spectrum of complex CdCl2-[CS(NH2)2]2.

The Raman spectrum of the crystals obtained in step 3.6 of the protocol is shown in Figure 3. It displays the peaks corresponding to the Cd-Cl, N-C-S, and C-S bonds (217 cm-1, 469 cm-1, and 715 cm-1, respectively), which agree with the results by S. Selvasekarapandian et al.14. On the other hand, P. M. Ushasree et al.3 previously reported that the change in the spectra is due to a higher count of Cl-Cd-S bonds that remain together in the final structure of CdCl2-[CS(NH2)2]2. That higher count causes an increase in magnitude on the Raman spectrum when UV is used. This is because of the formation of zwitterion. A zwitterion is an electrically neutral chemical compound that has positive and negative formal charges on different atoms. Selvasekarapandian,S., et al.14 reported that zwitterion maintains the stability of the thiourea and allows the binding to the cadmium ion. Although Figure 3 exhibits the same bonds for both experiments, for the one without the UV assistance (CBD), such intensities are lower, which indicates a smaller number of bonds.

X-ray diffraction (XRD) and scanning electron microscopy (SEM) analysis were performed on the same powders mentioned above (in step 3.6 of the protocol). Firstly, Figure 4a shows the XRD pattern. The pattern fully indexes with the data sheet 18-1962 CdCl2-[CS(NH2)2]2, corroborating the presence of the complex. It also shows the preferential growth in (020) and (001) planes when UV light is used, which correspond to sulfur and cadmium atoms within the structure, respectively. Secondly, observing the morphology of the crystals in the SEM images in Figure 4b and 4c, the effect of UV light can be seen: acicular crystals 4x - 6x larger are formed when UV light is used (Figure 4c). Thirdly, in Figure 4b, typical crystals obtained are shown, and those results are in good accordance with the report by P. M. Ushasree et al.2. Subsequently, the crystals obtained in step 3.6 of the protocol were analyzed by thermogravimetric analysis (TGA) to determine their behavior before calcination. The obtained TGA analysis displayed in Figure 5 exhibits a similar behavior for both experiments, when UV is used (PCBD) and when it is not (CBD), and both are in good accordance with the results obtained by V. Venkataramanan et al.1.

Then, to obtain CdS, calcination at 773 K was performed in both experiments in similar conditions to what Ushasree,P.M., et al.3 reported. Next, in Figure 6a, DRX of the calcined complex shows no representative differences in the CdS obtained by CBD vs. PCBD. By means of SEM, Figure 6b and 6c exhibit a slightly more prominent average particle size for the PCBD (Figure 6c) than for the CBD (Figure 6b). Therefore, it is concluded that the UV light promotes the incorporation of the sulfur to the cadmium and this causes a preferential growth in the crystalline structure of CdCl2-[CS(NH2)2]2. Finally, the CdS obtained after the calcination shows no evident difference. 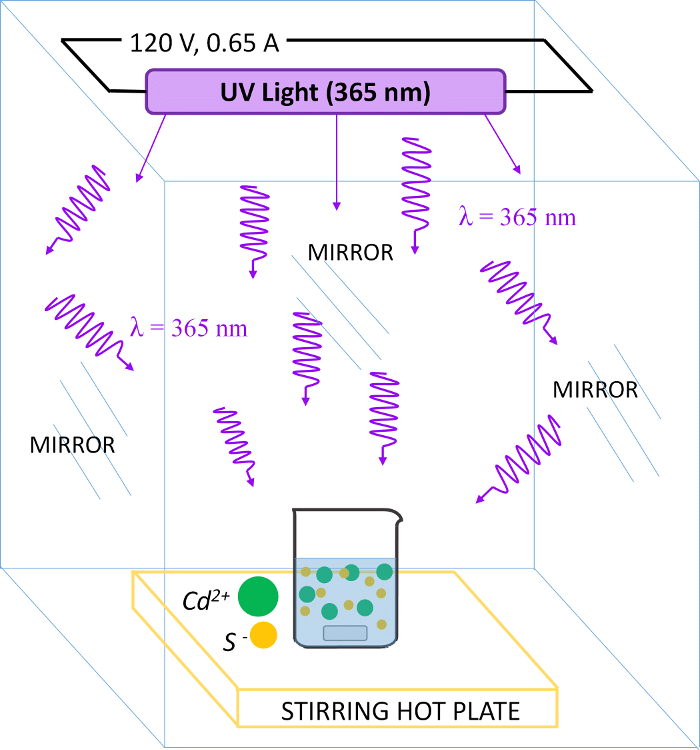 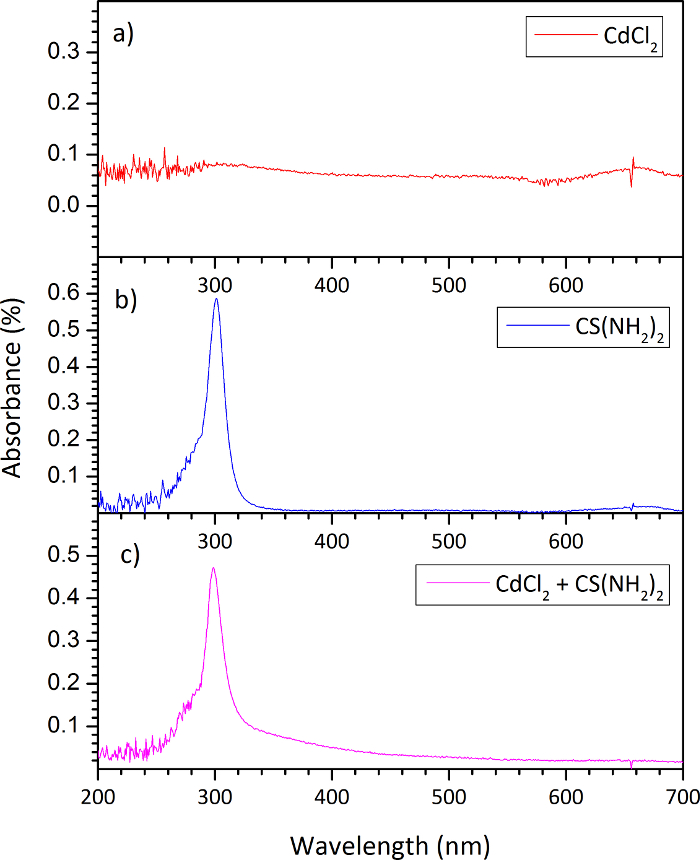 Figure 2: Optical absorption spectra of the precursor solution. (a) CdCl, (b) CS(NH2)2, (c) CdCl2 + CS(NH2)2. a), b), and c) shows partial absorption of the UV light. Please click here to view a larger version of this figure. 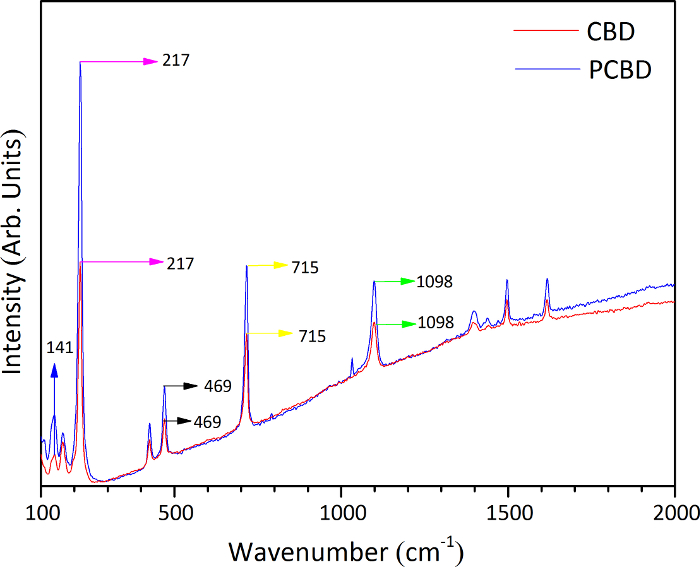 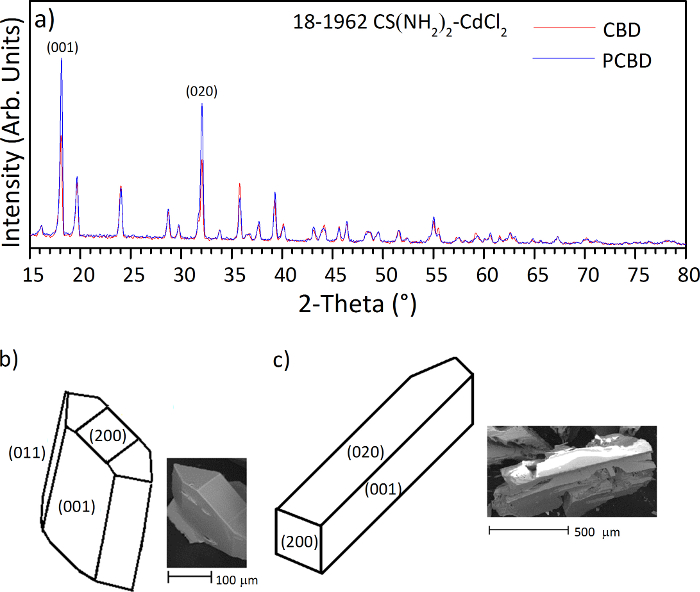 Figure 4: XRD. XRD patterns of bis(thiourea) cadmium chloride CBD and PCBD are shown in a). A scheme of the obtained crystals and SEM images without UV assistance in b) and with it in c). Please click here to view a larger version of this figure. 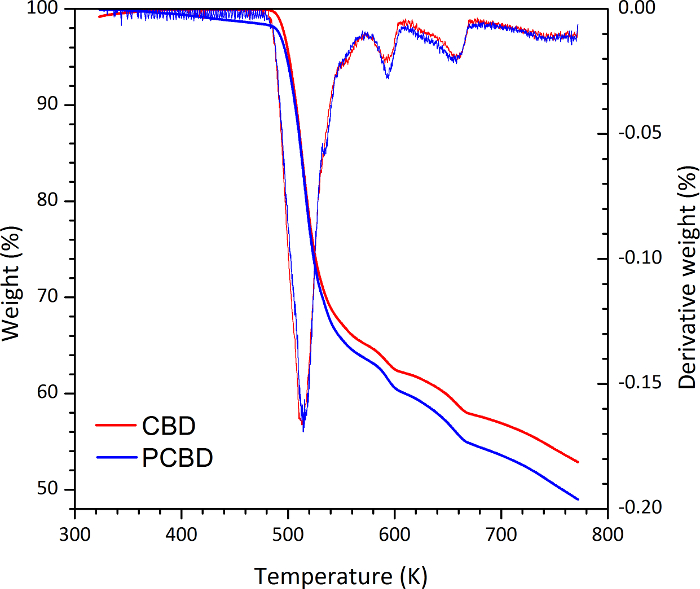 Figure 5: Thermogravimetric analysis. TGA comparison of bis(thiourea) cadmium chloride crystals obtained by CBD and PCBD (Experiments A and B respectively). Please click here to view a larger version of this figure. 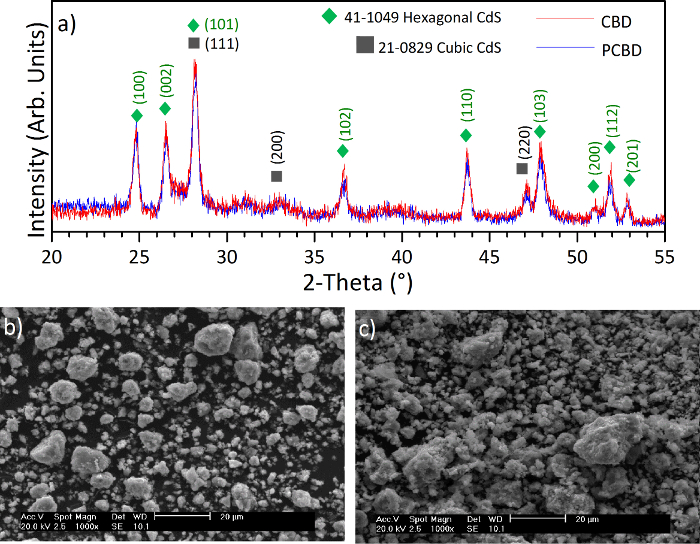 Figure 6: Obtained CdS. In a) the XRD comparison of CBD vs. PCBD is displayed. b) and c) exhibits SEM images of the final product obtained after calcination at 773 K. Please click here to view a larger version of this figure.

The discussion presented in this section focuses only on the protocol and not on the results already shown in the representative results.

One of the most critical parts of the protocol is the preparation of the precursor solution. It is fundamental to maintain an acidic pH to avoid the Cd(OH)2 formation. If the pH is not acidic, it leads to the direct formation of CdS due to the thiourea dissociation and the Cd(OH)2 formation.
The second most important step is step 3.2, the filtering of the solutions that must be performed before the solutions cool down because otherwise, the cooling-off causes the formation of the crystals to start.

In this protocol, the rapid growth of CdCl2-[CS(NH2)2] 2 is reported, which occurs in a time less than 10 min. Other researchers (see Ushasree et al.2,3) report growing times up to 45 days for single crystals.

The method of the synthesis of CdCl2-[CS(NH2)2]2 using UV light when the reaction is performed (PCBD) is reported in an extensive and detailed way for the first time in this protocol. 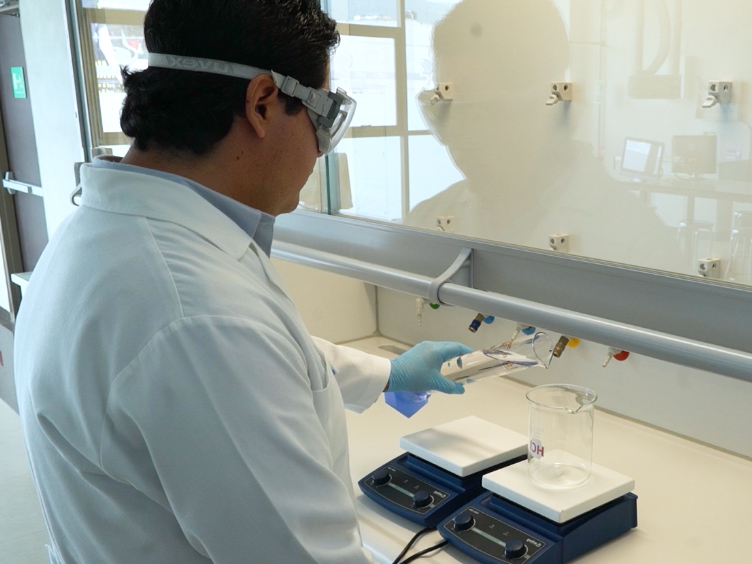