Why is it relatively hard to remember everything on a shopping list if it includes more than just a handful of items? Why is it possible to remember a phone number that one just heard, but not two or three phone numbers at once? Why is it difficult to remember names when several new people are introduced at the same time?

The answer has to do with the fact that over short-durations people rely on a specialized memory system called working memory. Unlike long-term memory, working memory has a very limited capacity. It is there so that information can be kept in mind, studied, manipulated, and then transferred to other memory and cognitive systems. But in order to serve in this active role, it needs to be selective, admitting only limited amounts of information at a time.

Experimental psychologists tend to think that people possess independent working memory systems for different kinds of information, with a major division between verbal and visual information. Each of these systems has an independent capacity limit.

To measure a person’s verbal working memory capacity limit—often called, his or her memory span—experimental psychologists often use a verbal list paradigm.

This video will demonstrate the measurement of verbal working memory span using a verbal list paradigm.

Table 1. List learning results. Example data from one participant. Recall that there were five cards for each list length. For a given word position and given list length, the participant had five opportunities. Percentage correct is thus the number of correct responses out of five.

Unlike long-term memory, working memory has a very limited capacity, which allows selective information to remain active-to be studied, manipulated, and then transferred to other memory and cognitive systems.

Researchers can measure the capacity limit of verbal working memory-the memory span-through the use of a verbal list paradigm. This paradigm involves the researcher reading word lists of varied lengths to subjects and then asking the subjects to repeat back the words in sequential order.

This video demonstrates standard procedures for studying verbal working memory span by explaining how to design and conduct the experiment, as well as how to analyze and interpret the results.

In this experiment, participants listen as an experimenter reads word lists with varying lengths. In this case, word positions among the varied-length lists are the independent variables.

Participants are then asked to hold words in working memory while a list is read, after which they are asked to recall the words on the list in the same order. Recall accuracy, or how many words on the list are repeated back in the correct order, is the dependent variable.

At the beginning of the list, words are mentally rehearsed more than those in latter positions. Therefore, higher recall accuracy is hypothesized for words in the primary positions. Such performance is referred to as a primacy effect.

In contrast, when longer lists need to be recalled, contents of verbal working memory interfere with each other. Thus, the words in the middle of a list are recalled with greater difficulty, because they have more neighbors.

Since words at the end of the list were heard most recently and have few interfering neighbors, they are expected to be recalled with high accuracy. This aspect of verbal working memory is referred to as the recency effect.

Finally, verbal working memory span is classified by identifying the longest list for which participants performed better than 75% correct across all word positions.

To conduct this study, prepare stimuli by generating a random word list of 210 common nouns, such as car, dog, pen, or boat.

From the master list of nouns, create seven varied-length piles, each containing five index cards with different nouns written on each one. Thus, for the first stack, start by writing three of the generated nouns, and increase the number of words for each stack until you have a list length of nine.

To finalize the word lists, verify that no nouns are repeated across the lists or clustered into categories that would unintentionally make recall easier. Arrange the stacks into piles of increasing order-from shortest to longest-and place facedown.

To begin the experiment, greet the participant and have them take a seat facing you, with the pile of index cards placed in front of you. Explain the instructions to the participant, providing details on how they should remember the words read to them and then repeat the list back in the proper order.

First, pick up a card and slowly read the words out loud in order from top to bottom. When you reach the end of the list, say 'Go.'

As the participant recites the list back, follow along on the card and mark whether each word was repeated back correctly or incorrectly in the right order by placing a checkmark or X, respectively.

Make sure to go through all cards in each pile before moving on to the next one. Complete the session with the longest list.

To analyze the data, tally the results based on the number of words and the position of each word in the list for all of cards in each set. Remember that there were five total responses for each position.

To visualize list recall performance, plot percent correct as a function of word position by list length. Notice that recall is more accurate for words positioned in the beginning and end of the lists than the middle words, confirming the primacy and recency effects in verbal working memory.

To calculate working memory span, summarize percent correct as a function of list length and word position. Identify the longest list for which a participant performed better than 75% correct for all word positions.

Now that you are familiar with designing a verbal list paradigm, you can apply this approach to answer specific questions about working memory function.

Working memory is engaged on a daily basis, for recalling detailed steps to a favorite recipe, or trying to remember the names of several new people at a social function.

In addition, memory span is included as a component of many intelligence tests, as the measure correlates very reliably with IQ.

Such correlations also allow memory span to be used with functional imaging to determine whether brain damage impacts cognitive functioning in general, or as an indicator for degenerative diseases such as Alzheimer's.

You've just watched JoVE's introduction on verbal working memory span. Now you should have a good understanding of how to design and conduct the experiment, as well as how to analyze results and apply the phenomenon.

In terms of verbal memory span, one way to classify a person’s ability is as the longest list for which he/she performs better than 75% correct for all word positions. For this participant, that seems to be a list with five words (Figure 1), which makes the verbal working memory span five. 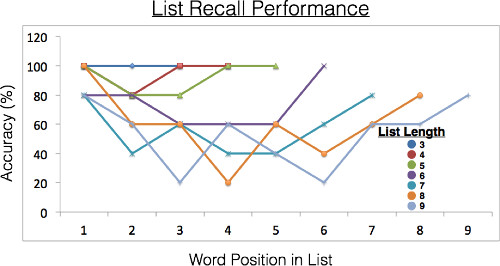 Figure 1. List learning accuracy as a function of word position and list length. Each line represents a list of a given length, and each point is the percent of occasions in which a word in a given position was recalled.

One feature of performance here and in general in list learning experiments is that accuracy is much better at the beginning and end of a list, compared to words in the middle. As shown in Figure 1, for the seven-word performance (colored in teal), the first word was recalled with 80% accuracy (one mistake out of five trials), and the last word too. But in the middle, performance was 40% or 60%.

Such results are typical, and experimental psychologists have used results like this to draw several conclusions about verbal working memory. The first is that it involves an active rehearsal process. This is why words in the beginning of the list are remembered better—sometimes called a primacy effect. They are rehearsed more than other words over the duration of maintenance. The second conclusion is that the contents of verbal working memory interfere with one another; this is why words in the middle of the list are recalled with greater difficulty. They have more neighbors to compete with and interfere with. And this is also why the very end of a list is often spared—called a recency effect. The words there were heard most recently, and with no interfering neighbors afterwards.

Measures of verbal working memory, including list learning, are used in a variety of contexts as a quickly and easily obtainable measure of an individual’s cognitive ability. This is because memory span is known to correlate very reliably with IQ. In fact, memory span is a sub-test on many IQ tests. In clinical settings, verbal span can thus be used to determine whether illness or brain damage has had an effect on cognitive functioning in general, and as indicator of degenerative diseases such as Alzheimer’s. 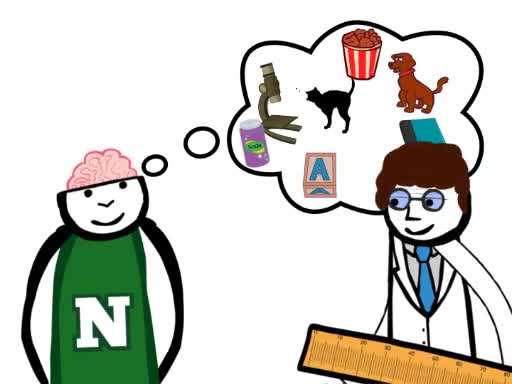