When orchestrating an experiment, it is important that the experience elicits the most natural reactions from the participants as possible. Researchers accomplish much of this through their creation of the experimental settings.

Many research projects focus on interactions between two or more people.  In these situations the environment or setting must often be less natural; often only one person can be a true participant and others in the study need to be “confederates,” that is, allegedly unbiased participants whom, in actuality, act according to the researcher’s directions.

This video uses a two-group experiment to see if participants are more likely to imitate a person with more power versus similar power compared to the participant.  The video also highlights the use of research confederates.

Psychological studies often use higher sample sizes than studies in other sciences.  A large number of participants helps to better ensure that the population under study is better represented, i.e. the margin of error accompanied by studying human behavior is sufficiently accounted for.  Further, human participants for research like this are often readily available and the experiment is quick and inexpensive to replicate so we want to use as many participants as possible.  In this video we demonstrate this experiment using just one participant.  However, as represented in the results, we used a total of 156 participants to reach the experiment’s conclusions.

Confederates, or research actors, are commonly employed in psychology experiments to secretly participate along with actual subjects.

Through the incorporation of confederates, this video demonstrates how to design, perform, analyze, and interpret an experiment where non-conscious mimicry is reliably measured.

In this case, researchers manipulate the experimental setting to test whether a participant is more likely to mimic a person with greater social power versus a person with similar power.

This experiment uses a two-group design with a critical element: a hired actor or confederate. The confederate acts according to the researcher’s directions, which allows for secret observations.

Subjects think that they are observing other participants’ behaviors as they work on math problems through a one-way mirror. In actuality, the researcher is interested in whether or not the subjects subsequently mimic behaviors acted out by the confederate as he works on each math problem.

The participants are then asked to score the questions that they think the confederate got right or wrong. At the same time participants are scoring each problem, the researcher observes them and tallies the dependent variable—the number of behaviors mimicked.

To conduct the experiment, you will need: informed consent and final debriefing papers, pens, a sheet of GRE-level math problems, a one-way mirror for observation, and a chart of behaviors to tally.

To begin the experiment, meet the participant in the lab. Guide all participants through the consent process and discuss the overall plan for the session.

While the participant is waiting in the room for someone to appear on the other side, meet the confederate actor. Instruct them to respectively engage in the following seven key behaviors in order with seven math problems: playing with their hair, putting a pen in their mouth, tapping their fingers on the desk, touching their face, wrinkling their nose, whistling, and leaning back in the chair.

After handing the confederate the sheet of GRE math problems, return to the original participant with a pen and a copy of the math problems. Tell them that the other observed participant is either: (1) a head residence hall assistant on campus, or (2) another normal student participant.

To analyze how confederates influence the outcome, tally the number of behaviors mimicked for each condition.

Now that you are familiar with how psychology experiments are cleverly implemented with confederates, let’s take a look at how various researchers employ confederates to affect social behaviors.

In a recent study, confederates were used to examine social influences on remembering. A confederate gave participants misinformation that led to incorrect memories being recalled. Thus, the use of confederates shows that memory recall is socially contagious.

In another experiment, confederates were used to examine social cues of attraction. When a male confederate interacted with a female confederate’s baby, women who witnessed the interaction liked him better than when he ignored the baby.

Neuroscientists are interested in how our brains process mimicking the actions of others. Discovering the neurophysiological correlates is critical for understanding perception and mechanisms underlying social cognitive disorders.

You’ve just watched JoVE’s introduction to using confederates in experimental studies. Now you should have a good understanding of how to design and perform the experiment, as well as analyze results and apply the phenomenon.

The data graphed reflect the average number of behaviors the participant mimicked while observing the confederate (Figure 3). Recall that there were 7 possible behaviors to mimic so participants’ scores could range between 0 and 7.

To determine if there were differences between the high and equal power conditions, a t-test was performed for independent means. The results indicated that participants who believed the confederate had higher power mimicked a greater number of behaviors than those who believed they had similar power. 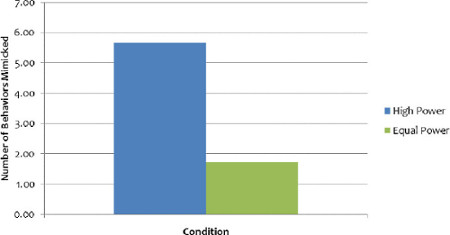 Confederates are common in psychology research. For example, a confederate can give participants specific suggestions or information that can later influence memory.2 Researchers also use confederates in field studies to recreate everyday interactions. For example, when a male confederate interacted with a baby, women liked him better than when he ignored the baby.3 This study replicates and extends previous research on embodiment, which showed that those who want to feel affiliated to another person are more likely to engage in nonconscious mimicry.4 A number of factors may influence the extent to which a person non-consciously mimics another. For example, a recent experiment induced participants to feel a sense of prideful, positive, or neutral feelings.5 The results indicated that participants who felt a sense of pride were less likely to mimic a confederate’s foot shaking behavior. 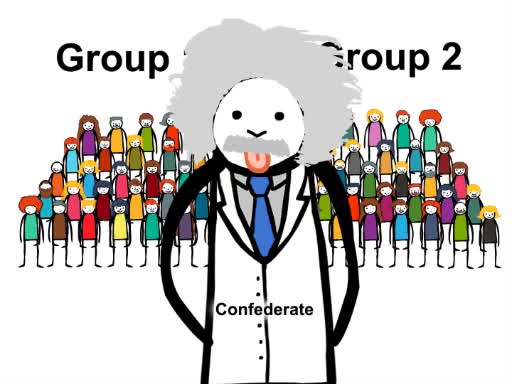