Source: Laboratories of Judith Danovitch and Nicholaus Noles—University of Louisville

Human memory is fallible, and people often cannot accurately recall what they have seen or heard. Adults are aware of their limited memory capacity, so they use strategies, such as rehearsal and mnemonic devices, to improve their recall of important information. Because adults understand the limits of memory, they know it makes more sense to write down the items on their shopping list rather than to try to remember the items when they get to the store. This ability to think about one’s own memory is called metamemory. Metamemory is one component of a broader set of cognitive processes that allow humans to think about their own knowledge and thinking, which is called metacognition.

Although young children understand that people have thoughts and a limited amount of knowledge, they often have trouble acknowledging the limits of their own knowledge and cognitive skills. Children’s ability to accurately estimate their own memory capacity and abilities improves over the elementary school years. One common way of measuring metamemory and its development is by giving children an opportunity to predict how well they can remember something, and then observing how well their prediction matches their actual recall.

This experiment demonstrates how to measure children’s metamemory based on the methods developed by Shin, Bjorklund, and Beck.1

Recruit children between ages 6 and 9. For the purposes of this demonstration, only one child is tested. Larger sample sizes (as in the Shin, Bjorklund, and Beck study1) are recommended when conducting any experiments.

Participants should have no history of developmental disorders and have normal hearing and vision.

Conceptualizing one’s own memory, referred to as metamemory, is often difficult for young children to do.

Although young children understand that people have thoughts and a limited amount of knowledge, they often have trouble acknowledging the limits of their own memory abilities, often overestimating their capabilities.

Importantly, their ability to accurately estimate their own memory capacity improves over the elementary school years, and they start using adult-like strategies, such as making lists to improve recall of information.

This video demonstrates how to design and conduct an experiment investigating metamemory in school-aged children, as well as how to analyze and interpret results involving predicted and actual memory recall.

In this experiment, children in two age groups—6 and 9 year-olds—are first asked to predict how well they think they can remember objects before being shown the items.

After observing the objects and waiting through a short delay, in which they complete distractor puzzles to prevent rehearsal, the children are then asked to recall as many objects as possible.

Children’s capacity to accurately predict memory ability is expected to improve with age. In other words, the prediction of 9-year-olds will more closely match their actual recall, compared to 6-year-olds.

Before the experiment begins, gather the study materials, which include a set of 18 cards that contain different black and white pictures of common objects with their names labeled and a number line that ranges from 1 to 18.

When the child arrives, verify with the parent or guardian that they have no history of developmental disorders and normal hearing. Have them sit on the opposite side of the table.

To begin the experiment, inform the child that they will be playing a memory game and will have time to study the cards at the end.

Using the number line, ask the child how many of the 18 pictures they think they will remember, and record their response.

During the object presentation phase, present each card, one at a time, and ask the child to name the object or read the label. Make sure to provide feedback every time, and place the card face up on the table.

After all 18 cards have been presented, inform the child that they will have 2 min to study the pictures. Start the timer, and allow them to study in any way they want to. When the time has elapsed, pick up the cards.

To ensure that the child is not continuing to rehearse the studied items, create a buffer between the study and memory test by giving them a set of puzzles to work on during a delay period of 5 min.

When the child fails to recall more items, end the memory test session and thank them for their participation.

Once the study is finished, average both the number of items that children predicted they would recall and the number they actually recalled by age group. Notice the difference between age groups.

To calculate each child’s prediction accuracy, subtract the actual number of items recalled from the predicted recall value. Using these scores, now graph the percentage of children by age group who overestimated their memory—that is, those who predicted that they would recall more than they did—and compare the percentages using a chi-square test. Note that fewer 9-year-olds overestimated their memory compared to 6-year-olds, indicating that memory prediction improves as a function of age.

Now that you are familiar with children’s tendencies to overestimate their memory abilities, let’s examine both positive and negative consequences for their behavior in a number of situations across development.

The mere thought of thinking about succeeding can help motivate children to face challenging tasks. For example, their naivety likely contributes to their willingness to try new activities—like jumping into a swimming pool.

In contrast, children’s excessively positive views of themselves can also have risky consequences for their physical well-being. Younger children are more likely to engage in a dangerous behavior—like performing a bicycle stunt—as a consequence of their tendency to overestimate their knowledge and abilities.

You’ve just watched JoVE’s introduction for studying how children’s metamemory develops over time. Now you should have a good understanding of how to design and conduct the experiment, and finally how to analyze and interpret the results. 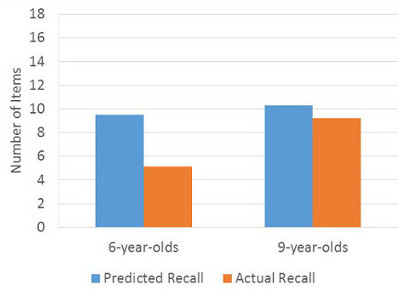 Figure 1. Average predicted and actual recall for children in each age group (out of 18 items). 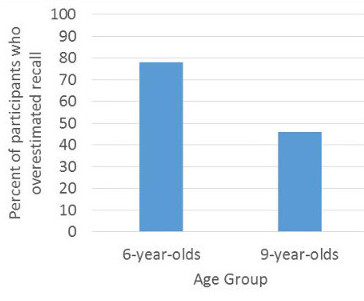 Figure 2. Percentage of children at each age who overestimated their memory.

Children’s tendency to overestimate their knowledge and abilities, including their memory, has consequences for their behavior in a number of situations. In the classroom, thinking that they remember or know more than they do can make it hard for children to understand the value of studying or rehearsing new information. Even when young children are faced with direct evidence of their limitations (e.g., failing to remember items in a memory test), they often persist in overestimating their abilities.

This excessively positive view of themselves can also have consequences for children’s physical well-being, as younger children are more likely to engage in a dangerous behavior, like a bicycle stunt, because they believe they are capable of doing so successfully. Older children who realize their limitations are less likely to risk activities well outside of their capabilities.

Although it may seem like overestimating yourself and having poor metacognitive awareness would only have negative consequences for young children, some researchers have proposed that children’s overestimation of their abilities is beneficial in some ways, as well. In reality, young children are not very capable. They still have a lot to learn, and it may be that having a true understanding of the limits of their knowledge, memory, strength, etc., would decrease their motivation to try new things or face a challenging task. However, because children believe they are capable, and in some ways invincible, they are willing to take on challenges, like learning to multiply or doing a cartwheel. Thus, thinking that they will succeed (even if it is actually unlikely) can help motivate children to try new activities and learn more about the world. 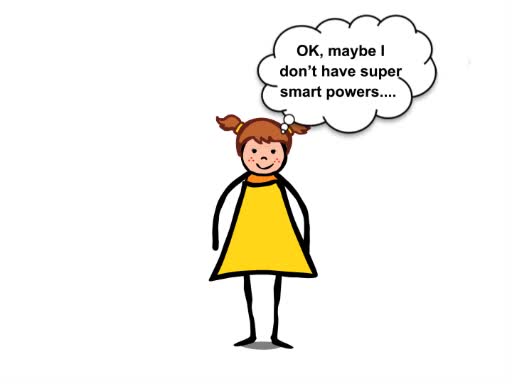