An electric field (E) will exert a force, 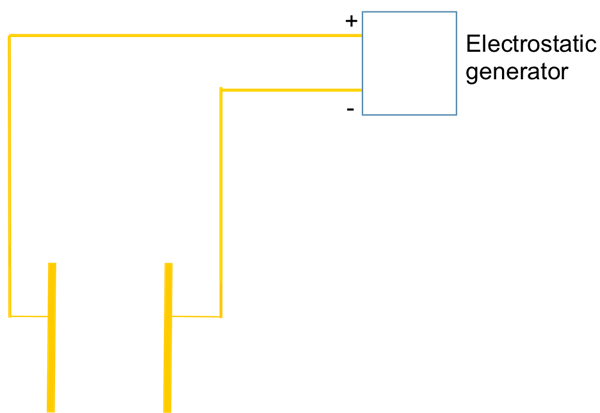 Figure 1: Diagram showing the schematics of two copper wires connected to an electric generator, the other ends (dipped into an oil) of the wires are connected to a pair of parallel electrodes.

Figure 2: Diagram showing the schematics of two copper wires connected to an electric generator, the other ends (dipped into an oil) of the wires are connected to a pair of electrodes shaped as an inner ring and an outer ring respectively.

The electric field is fundamental to understanding electricity and charge-charge interactions and is closely related to important quantities such as electrical potential.

Any charged object generates an electric field. The magnitude of the field is dependent on the quantity of charge on the object, and the distance from the object where the field is measured. These fields also exert a force on other nearby charges or materials causing interesting phenomena.

In this video, first we will revisit the basic concepts related to electric fields, and then we will illustrate an experiment that helps in studying electric fields and the forces that impact charges and materials in a field. Lastly, we will see a couple of applications that use electric fields to their advantage.

As mentioned previously, a charged object produces an electric field in the surrounding space. Using Gauss's law, it can be demonstrated that the magnitude of the electric field is linearly proportional to the source charge 'Q' and inversely proportional to the square of the distance 'r' from the source charge; and 'k' is the Coulomb's constant. Thus, doubling the amount of source charge results in double the field strength. Whereas doubling the measuring distance reduces the field strength by four times.

The total number of field lines produced by a charged object represents the amount of the charge, while the density of the lines at a particular location in the field denotes the magnitude at that location. Therefore, the lines are closely packed near a charged sphere, while they are more spread apart at a greater distance from the source .

Electric fields can also produce an electric potential difference, or a voltage drop, along the direction of the field. This phenomenon is discussed in detail in the Electric Potential video of this collection. Conversely, it is important to note that electric fields are also generated by the application of different voltages to two separated conductors. In this case, the field direction points from the higher voltage to the lower voltage.

In addition to charged objects, electric fields also affect materials that are charge neutral, like copper wire. All neutral materials are made up of a huge and equal amount of positive and negative charges. Electric fields therefore exert a force on each of these charges; resulting in a displacement of large collections of charge in the material. This can result in an effective separation of positive and negative charges and is known as "polarization".

In the next section, we will see how to visualize field lines of the electric field generated by application of voltages to two different electrode configurations. And in the section following that we will see the effect of electric forces and the phenomenon of polarization using paper, fur, an acrylic rod, and a soda can.

The observation tank is filled with a viscous oil, like Castor oil, and about half a gram of polarizable powder, such as semolina seeds.

Load the observation tank filled with the oil and powder emulsion into its holder. Next, mount the plate with the parallel electrode configuration onto the holder. Using cables, connect the electrodes to the negative and positive terminals of the electrostatic generator.

Turn the crank of the generator at least 5 full turns thereby creating a potential difference between the two conductors and establishing an electric field. Since the added powder is polarizable, the specks of powder will slowly begin to line up with the electric field lines.

Next, in order to neutralize the charges, directly short the positive and negative terminals by connecting a cable between the terminals. After waiting a few seconds for the charge to dissipate, disconnect the shorting cable from the terminals. Then, unmount the electrode plate from the holder.

Now, mount the plate with the concentric circle electrode configuration onto the holder. Mix the oil and polarizable powder in the observation tank by carefully rolling the set-up.

Now let's discuss an experiment that demonstrates polarization and electric field forces. The common items used in this demonstration are an empty soda can, an acrylic rod, a piece of fur large enough to wrap around the rod, and a strip of a paper.

Place the empty soda can on its side so it can roll freely. Wrap the piece of fur around the rod and rub it end to end at least 10 times. By rubbing the rod, you are physically transferring electrons from the fur to the rod and making the rod negatively charged allowing it to generate the electric field needed to induce a polarization.

Bring the charged rod close to the empty soda can and observe the attractive forces on the can as it begins to roll toward the rod. This is because the rod's electric field induces a polarization on the soda can. Charges opposite in sign to those on the rod are brought closer to the rod, while charges of the same sign are pushed away from the rod. This results in the rod exerting both attractive and repulsive forces on the can. Since the opposite charges are closer to the rod, these experience a stronger force, which produces a net attractive force toward the rod.

Next, bring the charged rod close to the strip of paper and observe the paper bend toward the rod. The attractive behavior is the result of the same induced polarization effect that caused the soda can to roll toward the rod. Interestingly, despite weighing much less than the soda can, the overall movement of the paper is comparatively small. This is due to the insulating nature of the paper compared to the conductive nature of the can, which leads to a much weaker polarization.

Electric fields are ubiquitous since they exist wherever there are charged objects or voltage differences.

Electricity, or electrical current, is the result of electric force fields pushing charge through highly conductive wires. On a large scale, this involves the routing of electricity from power plants to residential and commercial buildings. On a smaller scale, the passage of electrical current through a circuit is fundamental to operating any electronic device, such as an LED, a light bulb, a fan, or a computer.

Mass spectrometery uses electric fields to determine the chemical content of a sample. In this equipment, first the ionized molecules are generated by application of strong forces, such as an electron beam, plasma, or lasers. These charged molecules are then passed through a set of alternating electric fields. The field exerts an electric force on the molecules, which alters their trajectory, leading to effective separation.

You've just watched JoVE's introduction to Electric Fields. You should now understand the principles that govern the magnitude and direction of electric fields, how to visualize electric field lines, and how polarization can be induced by an electric field. Thanks for watching!

For step 1.4, the powder will start to form line patterns between the electrodes as shown in Figure 3. This is because the powders are polarized and will line up with the electric field. They are also attracted toward where the field is stronger, namely closer to the positive electrode. The powders do not move appreciably because the oil is very viscous. The pattern of the powders visualizes the "electric field lines". 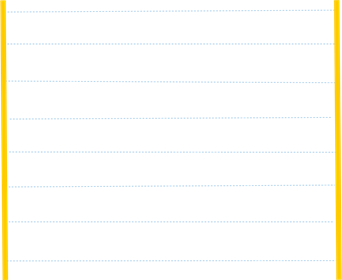 For step 1.7, the powder outside the center ring (made by the "+" electrode) forms a radial line pattern, as shown in Figure 4. This indicates that an electric field exists outside the inner ring. However, the powder inside the inner ring appears random and does not form aligned patterns. This reflects the fact that the electric field inside the ring is approximately zero. 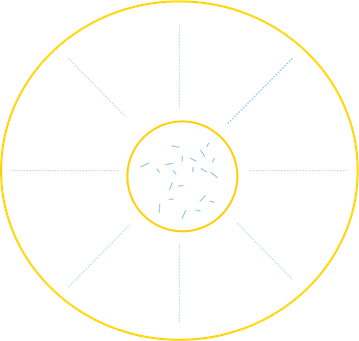 Electric fields are ubiquitous. There are electric fields whenever there are charges or voltage (electric potential) differences. Electric fields provide the force to push charges (usually electrons) to form electrical current in any circuits. Electric fields are also responsible for the sparks we see and experience in dry climate (typically in winter time). When a certain action (for example, rubbing a sweater when removing it) produces a sufficient amount of charges and thus a sufficiently strong electric field, the field can cause transient electrical conduction in air (also known as "electric breakdown", where the electric field is strong enough to not only polarize the air molecules, but to even rip off electrons from air molecules), and cause sparks. 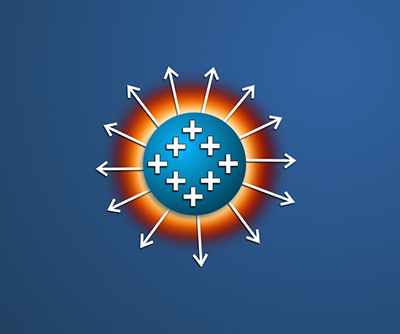