Polymers are made from macromolecules, which are composed of repeating units (the so called monomeric units). In our modern world, polymers play an important role. One of the first important polymers was nylon, which is a polyamide. It found widespread application in tooth brushes and stockings.

In the following synthesis of a polyamide, a dicarboxylic acid chloride condenses with a diamine to form a polyamide, under the release of hydrogen chloride. The notation 6,10 in the name of polyamide-6,10 reflects the number of carbons in the diamine monomer (six in this case) and the number of carbons in the dicarboxylic acid chloride monomer (ten in this case).

One characteristic of a step-growth polymerization is the dependence of the chain length and the conversion of the polymerization. At the beginning of the reaction most monomers will condense to mainly form dimers and trimers. With further progress, the dimers and trimers will combine to oligomers and only after high conversion rates, when most monomers have reacted, the oligomers will condense to form polymers with a high number of monomeric units. This phenomenon is illustrated in Figure 1.

Synthetic polymers are not only ubiquitous in everyday life, but have numerous applications across the applied and basic sciences.

Polymerization is a process used to create macromolecular compounds known as polymers.

These macromolecules are made up of a large number of repeating units known as monomers. Materials made up of these large molecules have unique chemical, mechanical, and thermal properties.

There are several ways to classify polymerization. A common way is by its growth characteristics, either chain-growth or step-growth polymerization. In chain-growth, monomers are added to the end of an ever-lengthening chain of molecules. This continues until the monomer is exhausted or growth is inhibited.

In step-growth polymerization, bi-functional or multi-functional monomers initially react to form dimers and trimers. As the reaction proceeds these compounds combine to form larger oligomers. The reaction continues until long polymer molecules are formed.

Another way to classify polymerization is based on the reaction mechanism. One category is addition polymerization, where monomers add together without the formation of a byproduct. For example, when a vinyl chloride monomer forms a free radical, it attacks other monomer molecules successively propagating a long chain molecule, known as polyvinylchloride or PVC.

In the other mechanism, condensation polymerization, molecules with complementary functional end units react, releasing a byproduct in the form of water or a small molecule. The reactants can be monomers, or higher molecular weight intermediates.

An important polymer made from this process is a polyamide, better known as nylon. In this synthesis, a dicarboxylic acid chloride condenses with a diamine to form a polyamide and releases hydrogen chloride. As the reaction proceeds, monomer is consumed to form dimers and trimers, which react to form larger oligomers. Oligomers will then condense to form large molecular weight polymers.

Now that the basics of polymerization have been covered, let's take a look at the step-growth condensation reaction of polyamide using surface polymerization; a process where polymerization occurs at the interface of a heterogeneous mixture, consisting of an aqueous and an organic phase.

First, prepare the reaction solutions for the polymerization. In a beaker, mix 3 mL of sebacoyl chloride to 100 mL hexane. In a separate beaker, add 4.4 g of 1,6-diaminohexane to 50 mL of distilled water.

Add roughly 5 drops of a phenolphthalein solution to the aqueous diaminohexane solution.

Next, carefully overlay the sebacoyl chloride solution onto the aqueous solution containing the diaminohexane. A thin layer will form at the interface of the two phases. The visibility of the layer is enhanced by the phenolphthalein.

Finally, the polymer must be collected. Using a pair of tweezers, pull the formed polyamide film and wrap it around a glass rod. Wind the polyamide onto the glass rod.

Then wash the polymer with acetone, followed by copious amounts of water. Once this is complete, dry at 50 °C under reduced pressure.

A hollow, long strand of polyamide is obtained from this process.

Polymerization is used in many scientific and engineering applications. Here, we cover some of these applications.

Photo-polymerization utilizes light to initiate the reaction. Using masks, three-dimensional polymer structures can be fabricated in a layer-by-layer fashion. This system, which uses an off-the-shelf digital projector and photosensitive resins, can produce 3D objects with sub-100 μm resolution, enabling fundamental studies in mechanics and materials science, and emerging fields such as tunable metamaterials.

Biocompatible polymers have become an indispensable tool in the biological sciences. For example, density gradient multilayered polymerization allows for the creation of biocompatible-layered matrices that have distinct chemical and mechanical properties. This technique enables biomedical and basic research into cellular response in complex 2-D and 3-D environments.

A hollow, long strand of polyamide is obtained.

This experiment showcases in a vivid way the synthesis of a polymer in a simple fashion. The condensation polymerization of 1,6-diaminohexane and sebacoyl chloride gives a polyamide-6,10, which polymerizes at the interface of two liquid layers. This surface polymerization will form a hollow strand of polyamide, after pulling the polymer from the interface and wrapping it around a glass rod to wind it.

Polymers and polyamide find a variety of different uses in our daily life. Initially used for toothbrushes and stockings. Today, polyamide is used in the production of textiles, like rain coats, outdoor clothes, lab coats, and flight jackets. Due to its strength and toughness, polyamides are also used in parachutes, climbing ropes, and sails. These applications make polyamides one of the most important polymers in use today. 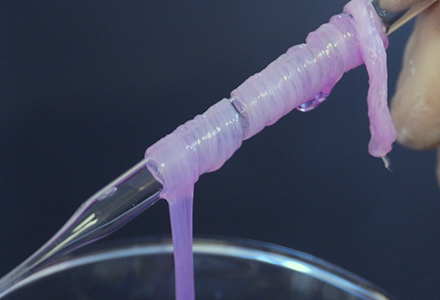