The delta wing, shown in Figure 1D, is a popular design in high-speed airplanes due to its superb performance in transonic and supersonic flight regimes. This type of wing has a small aspect ratio and high sweep angle, which reduces drag at high subsonic, transonic and supersonic flight regimes. The aspect ratio is defined as the wing span divided by the average chord

An effective way to observe this vortex flow phenomenon and study the vortex breakdown in a delta wing is by visualizing the flow in a water tunnel. By injecting dye in the flow surrounding a model from dye ports on the leading-edge, the vortex development and breakdown can be observed and its position measured. The data can also be used to estimate the stall angle.

Figure 1. Typical wing planform shapes: A) Rectangular, with constant chord along span, B) elliptical, C) tapered, with variable chord along the span, and D) delta wing, an aft-swept wing with zero taper ratio.

When a delta wing is subjected to slightly higher angles of attack, usually angles exceeding 7°, a flow separation occurs at the leading-edge. Instead of the flow separation occurring downstream near the trailing edge, as it would happen in a rectangular wing, the roll up of the leading-edge vortices, as shown in Figure 2, induce low pressure on the upper surface of the wing and enhance the lift. This phenomenon is called vortex lift and contributes to a delayed high stall angle compared to the stall angle of a rectangular wing.

These vortex patterns can be observed using flow visualization with dye in a water tunnel. A steady stream of dye is released through ports at appropriate locations on the model near the leading edge. The dye mixes with the water and follows the flow allowing visualization of streaklines. The dyed flow is tracked, and vortex formation, development, and interaction with other vortices and flow structures is observed until the vortex breakdown.

The dye and the water in the tunnel should have similar physical properties, and the release pressure at the port opening should be the same as the local flow pressure to minimize disturbances to the flow. The streaklines, formed by the dye, highlight various flow structures, such as vortices, laminar regions, turbulent regions and transition regions. These structures can be observed and used to compare the effects of different geometries or model attitudes on flow. 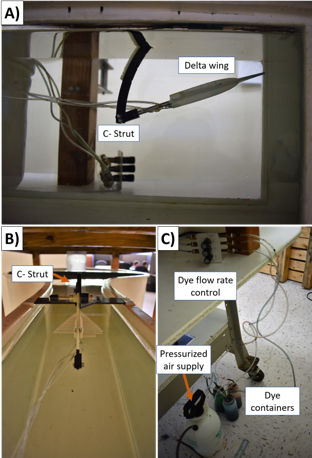 Figure 3. Delta wing experimental setup. A) Delta wing mounted in the C-strut inside a water tunnel test section. B) C-Strut connection to the walls of the water tunnel. C) Dye containers, pressurized air supply, and three valves to control the dye flow rate.

2. Visualizing streaklines over a delta wing

Airplane wings, and their design, are essential to defining performance characteristics of an aircraft. The delta wing is a popular design in high-speed airplanes due to its excellent performance in transonic and supersonic flight regimes.

The delta wing has a small aspect ratio, which is defined as the wingspan divided by the average cord length. For a delta wing, this is 1/2 the root cord length. Other common wing designs, like the rectangular wing and the swept-tapered wing, have higher aspect ratios.

The delta wing also has a high sweep angle, which is defined as the angle between the 25% chord line and the lateral axis. These wing characteristics reduce drag at high subsonic, transonic, and supersonic flight regimes. Importantly, the delta wing has a high stall angle as compared to high aspect ratio wings.

In aerodynamics, the stall angle is the point at which the angle of attack is too high, causing lift to decrease. The high stall angle of a delta wing is due to enhanced lift by a leading-edge vortex over the wing, called vortex lift. Vortex lift occurs when a delta wing is subjected to higher angles of attack, which causes flow separation to take place at the leading edge of the wing, instead of occurring downstream near the trailing edge, as it would for a rectangular wing.

The roll up of the leading-edge vortices induces low pressure on the upper surface of the wing. This pressure differential enhances lift. These vortices start from the wing apex, and progress downstream. At some point, they burst, called vortex breakdown, due to the high adverse pressure gradient.

In this experiment, we will use a water tunnel with dye to visualize these vortex patterns on a delta wing model and track the location of vortex breakdown at different angles of attack.

To conduct this experiment, you will need access to a water tunnel. First, obtain three 500-mL containers and fill each at least half full with dye. Use one container for blue dye, another one for green dye, and the last one for red dye.

The delta wing model used in our experiment has tubing already connected to the three dye containers. It also has three dye injection taps, which will disperse a different color dye at three different regions of the wing. Distance measurements are marked on the wing using 1-cm tick marks. The delta wing should already be attached to a C-strut support. Connect it to the tunnel with screws, keeping the yaw angle as close to 0 as possible.

Manually set the angle of attack to 0 by adjusting the angle on the C-strut. Then, set the water tunnel flow speed to 4 in/s. Once the flow has stabilized, supply pressure to the dye reservoirs using the manual pump.

After you've recorded at least 10 seconds of the vortex, change the angle of attack to five degrees. Wait for the flow and streak lines to stabilize and record the vortices for at least 10 s.

Repeat the measurement by increasing the angle of attack in 5° increments up to 55°. Record at least 10 s of the streakline vortex pattern each time.

If the water becomes too murky, causing the streak lines to appear dull, close the dye supply and turn off the tunnel. Drain the water and replace it with fresh water before proceeding.

From the experiment, we can identify vortex breakdowns at different angles of attack. The distance from the wing apex to the vortex breakdown, labeled as LB, is measured, as shown. For simplicity, we reference this distance as a percentage of the chord length from the trailing edge.

In summary, we learned how the low aspect ratio and high sweep angle of a delta wing contribute to its vortex lift and delayed stall. We then observed the vortex flow phenomenon on a model delta wing in a water tunnel, and used the vortex breakdown to estimate the stall angle. 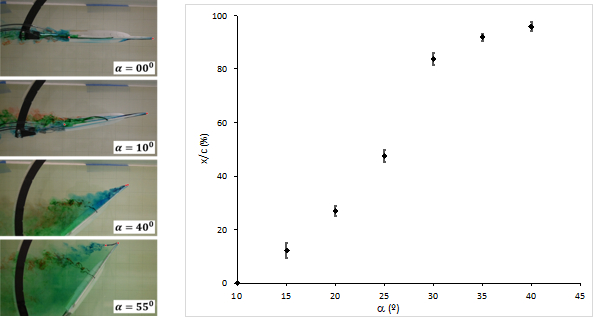 By using flow visualization in a water tunnel, the vortex breakdown locations for various angle of attacks in a delta wing were identified. Flow visualization in a water tunnel is performed by injecting dye into specific locations of the flow field. The dye follows the flow, which enables us to observe the flow streaklines. This method is similar to the smoke visualization technique that is used in a wind tunnel. However, the ability to use multiple different dye colors allowed easy visualization of the flow structures and interactions. Another advantage of this method is that it is a low cost technique that supplies 3D information of the flow field.

Dye injection for flow visualization is a classical method with numerous applications. For example, the famous Reynolds experiment on turbulence in pipe flow was executed using dye for the visualization, and it identified laminar and turbulent flow regions in circular pipes. This technique can be used not only to identify the turbulent regions but can also be used to study the mixing that is promoted by turbulence to study other flow structures.

Flow structures, such as vortices and separation bubbles, provide important information about the physics governing phenomena, including the vortex lift. Therefore, this method can be used for flow visualization to aid in the design and optimization of devices affected by flow fields, such as automobiles, ships, tall buildings, and long bridges. 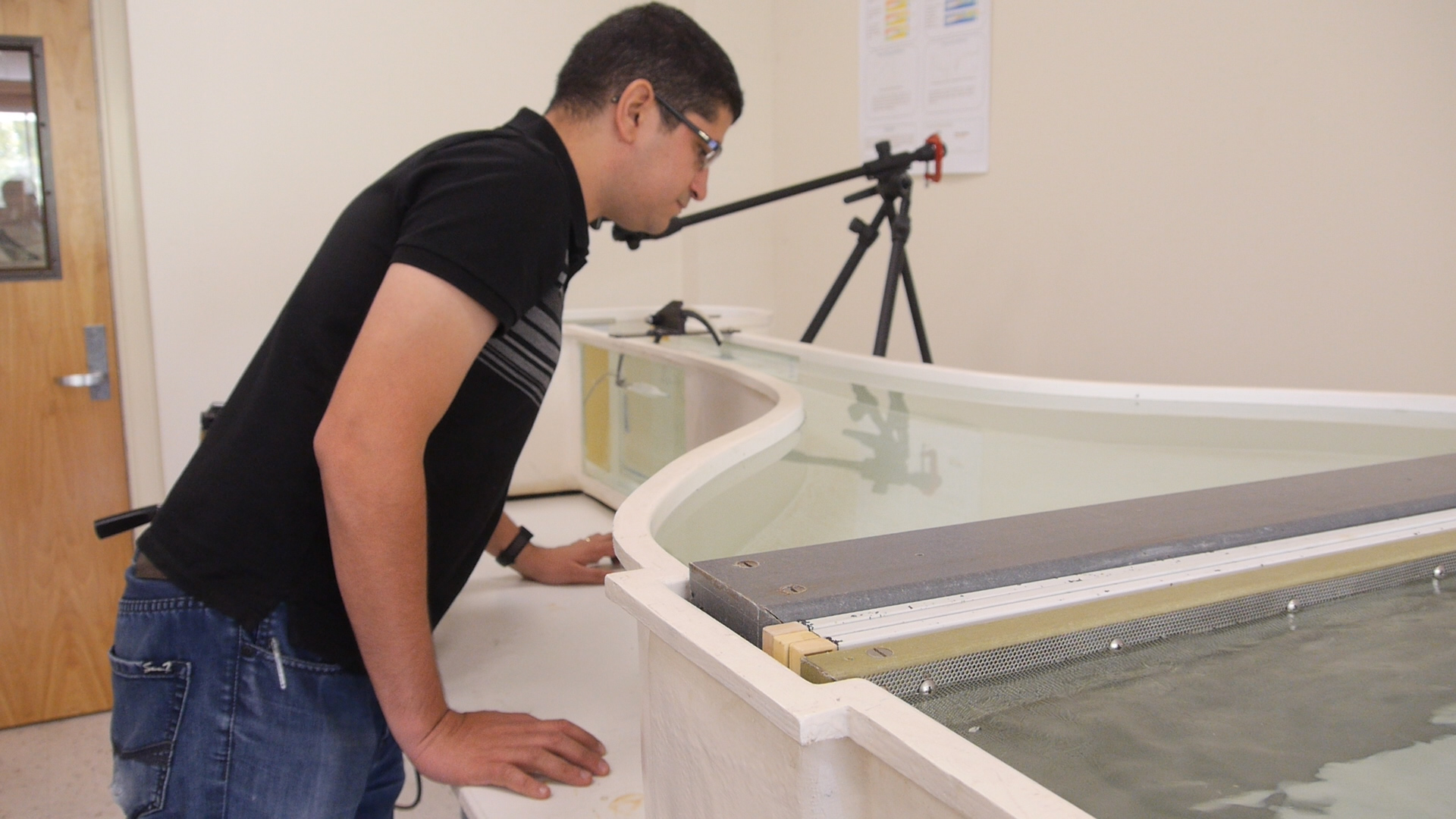