Binocular rivalry occurs when the eyes are presented with different images at the same location: one image dominates while the other is suppressed, and dominance alternates periodically. Rivalry is useful for investigating perceptual selection and visual awareness. Here we describe several easy methods for creating and using binocular rivalry stimuli.

Each of our eyes normally sees a slightly different image of the world around us. The brain can combine these two images into a single coherent representation. However, when the eyes are presented with images that are sufficiently different from each other, an interesting thing happens: Rather than fusing the two images into a combined conscious percept, what transpires is a pattern of perceptual alternations where one image dominates awareness while the other is suppressed; dominance alternates between the two images, typically every few seconds. This perceptual phenomenon is known as binocular rivalry. Binocular rivalry is considered useful for studying perceptual selection and awareness in both human and animal models, because unchanging visual input to each eye leads to alternations in visual awareness and perception. To create a binocular rivalry stimulus, all that is necessary is to present each eye with a different image at the same perceived location. There are several ways of doing this, but newcomers to the field are often unsure which method would best suit their specific needs. The purpose of this article is to describe a number of inexpensive and straightforward ways to create and use binocular rivalry. We detail methods that do not require expensive specialized equipment and describe each method's advantages and disadvantages. The methods described include the use of red-blue goggles, mirror stereoscopes and prism goggles.

(1) Introduction: What is binocular rivalry?

Normally, each of our eyes sees a slightly different image. Our brain combines the information it gets from the eyes to create a single coherent, three-dimensional representation of the visual scene. But what would happen if each eye were artificially presented with an irreconcilably different image at corresponding retinal locations? What conscious perceptual experience would such stimulation evoke? Many people's intuition is that the brain would still attempt to fuse the two images. However, this is not what happens. What actually transpires is a pattern of perceptual alternations, in which each eye's image dominates conscious perception for a certain period while the other image is suppressed, and periods of dominance and suppression reverse periodically, with only brief periods of mixed perception. This is known as binocular rivalry.

Binocular rivalry is considered a useful method for investigating the processes underlying perceptual selection and visual awareness, as stable input (the same images shown constantly to each eye) leads to alternating conscious percepts 1,2. Thus, binocular rivalry can be used to examine such questions as:

Creating a binocular rivalry display is simple. Any method that presents completely different images to corresponding locations of the two retinas will lead to rivalry.

(3) Representative results A: Considerations in creating a binocular rivalry display

Many of the publications in this field are aimed at an audience that is already highly familiar with binocular rivalry. These papers thus tend not to go into certain details regarding the experience of rivalry. This may be misleading to a newcomer. Therefore, here we will explicitly describe some characteristics of rivalry.

(4) Representative results B: Duration of dominance phases in binocular rivalry

Binocular rivalry alternations occur at random, independent-duration intervals. This means that the duration of the last dominance interval does not predict how long the next one will be. If dominance durations are divided into bins with an equal width (e.g., 500 ms), a histogram showing how many dominance durations of each length occurred tends to be well-fit by a skewed distribution known as a gamma function 8.

In general, the effects of experimental manipulations on durations in rivalry tend to manifest themselves in the shape of the best-fit gamma function, meaning that in each condition many different dominance durations will occur, but the probability of these might be altered by the manipulation.

Factors such as the two images' low-level features are known to affect the relative durations of their dominance and suppression periods1. For example, if the two images differ in contrast, the higher-contrast image will have, in general, longer dominance durations, leading to a best-fit gamma distribution with a greater median (Figure 10B). The effect of high-level cognitive functions (such as attention to one of the images) on dominance durations in rivalry is still controversial 16.

It is possible to use the parameters of the gamma function as dependent variables in an experiment, but the relationship between these parameters and the shape of the distribution is not readily transparent. Therefore, many researchers prefer to use a more accessible central tendency measure. Because the gamma distribution may be highly skewed, the median duration rather than the mean is often more representative of the results. Using the median of a non-Gaussian distribution also means that unless there is a large number of data points, the relevant statistical tests should be non-parametric. 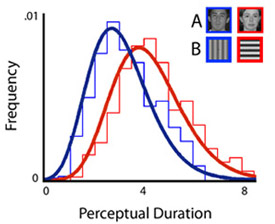 We have described the nature of binocular rivalry, several methods for creating it, and what considerations must be taken into account when it is used. As detailed in the Introduction, appropriate use of binocular rivalry makes it possible to experimentally address questions regarding the locus (or loci) of awareness, perceptual selection and unconscious processing. To carry out such investigations properly, however, one must be aware of issues such as the importance of maintaining stable vergence, and, if investigating unconscious processing, the necessity of using displays that are likely to yield complete suppression.

When choosing which method to use in order to create rivalry, it is important to take into account the advantages and disadvantages of each method. There is no point, for example, in using red-blue goggles if one is interested in using multi-colored stimuli; but on the other hand, this method is probably the easiest to use in an MRI scanner. Similarly, a mirror stereoscope is a very reliable way of ensuring that separate images fall on corresponding retinal locations; but the individual adjustments required for each observer and the technical difficulties involved in putting a stereoscope in an MRI scanner might make this method less attractive for some studies.

Finally, it is important to be aware of the characteristics of the experience of binocular rivalry in order to employ the appropriate dependent measures. When the research question concerns unconscious processing, independent verification that participants were indeed unaware of the suppressed image is essential. When one is interested in how an experimental manipulation affects dominance and suppression durations, it may be more illuminating to examine the (gamma-shaped) distribution of durations rather than just a central tendency measure such as the mean or median; and it may be important to ascertain whether the observers experienced sharp or gradual (piecemeal or wave-like) transitions of dominance.

We hope researchers interested in employing this fascinating phenomenon will find this introduction helpful. 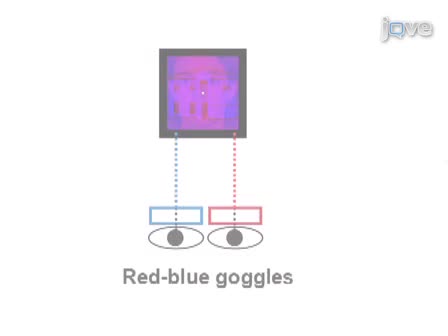