The lives of the majority of fish are predicated on swimming. This protocol describes techniques for capturing a range of swimming modes available to individual and schooling fish, and includes metrics associated with swimming physiology and behaviour.

Swimming performance tests of fish have been integral to studies of muscle energetics, swimming mechanics, gas exchange, cardiac physiology, disease, pollution, hypoxia and temperature. This paper describes a flexible protocol to assess fish swimming performance using equipment in which water velocity can be controlled. The protocol involves one to several stepped increases in flow speed that are intended to cause fish to fatigue. Step speeds and their duration can be set to capture swimming abilities of different physiological and ecological relevance. Most frequently step size is set to determine critical swimming velocity (Ucrit), which is intended to capture maximum sustained swimming ability. Traditionally this test has consisted of approximately ten steps each of 20 min duration. However, steps of shorter duration (e.g. 1 min) are increasingly being utilized to capture acceleration ability or burst swimming performance. Regardless of step size, swimming tests can be repeated over time to gauge individual variation and recovery ability. Endpoints related to swimming such as measures of metabolic rate, fin use, ventilation rate, and of behavior, such as the distance between schooling fish, are often included before, during and after swimming tests. Given the diversity of fish species, the number of unexplored research questions, and the importance of many species to global ecology and economic health, studies of fish swimming performance will remain popular and invaluable for the foreseeable future.

A variety of swimming performance abilities can be assessed in a swim tunnel. The most common way to characterize swimming performance is by the duration for which it can be maintained3. The slower the speed, the longer it can be maintained and vice versa. Speeds are generally referred to as 'burst', 'prolonged' or 'sustained', which correspond to durations of seconds, minutes to hours (max = 200 min), and hours and beyond (>200 min), respectively. To determine these speeds, fish are subjected to user defined 'steps', consisting of set 'height', i.e. water flow speed increase, and 'length', i.e. step duration. Maximizing step height and minimizing step length will capture the greatest burst speed, while doing the reverse will capture the greatest sustained speed. In step tests, the traditional way to report the maximum speed achieved is equal to the speed of the last fully completed step plus the temporal portion of the final, unfinished step (Figure 1A). 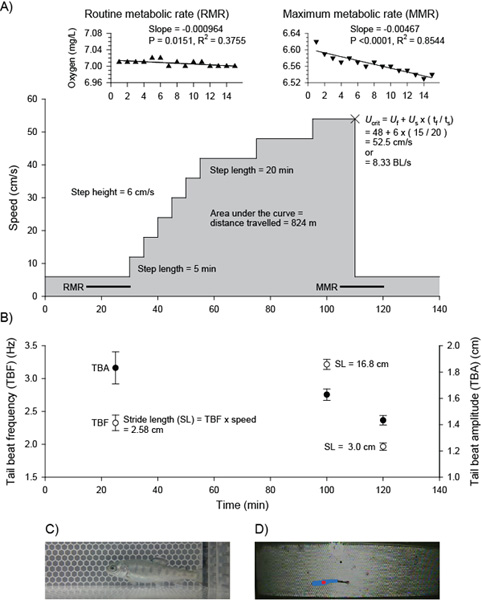 Figure 1. A) An example ramp-Ucrit test given to a juvenile salmonid, a hatchery raised rainbow trout (Oncorhynchus mykiss), 6.3 cm in body length (BL) and 3.5 g in mass. The test was carried out in a 12 L modified Brett-type respirometer (Loligo Systems, Denmark; www.loligosystems.com). Routine and maximum metabolic rates were calculated as slope (mg/hr) × volume (L) / fish mass (kg), and were 198 and 961 mg O2/kg/hr, respectively (scope for activity = 4.84). These rates are in keeping with those reported by Brett for juvenile sockeye salmon (O. nerka)13. Note: for oxygen uptake calculations, the volume of water is equal to the respirometer volume less fish volume. The cross indicates the point where the fish refused to swim further and where Ucrit was calculated. B) Tail beat frequency values were recorded over 10 s six times; tail beat amplitude values were recorded three times; values shown are mean ± SEM. C) An enlarged side view and D) top view of the fish swimming within the swim chamber. D) Shows the fish tracked by EthoVision software (Noldus, Netherlands; www.noldus.com). Abbreviations: Ucrit = critical swimming velocity; Uf = speed of the last fully completed step, Us = step speed, tf = time spent on last step, ts = step time.

In a natural setting, behaviors such as predator escape and migration depend on being able to swim at specific intensities for different times. In a lab setting, swim tunnel respirometers and stepped increases in speed can be used to estimate the ability of fish to perform numerous behaviours. Measures of metabolic rate and other tissue-level assessments (such as lactate production) can be included with swim tests to help determine physiological mechanisms underlying different swimming modes.

Swim tunnel design can greatly influence swimming performance. There are several types of swim tunnels used to determine swimming performance, most are characterized as either Brett13- or Blazka14-types. For either design, major considerations include the 'evenness' of the water flow (how rectilinear it is), the maximum flow speed and the length of the swim chamber. Evenness is important because fish will instinctively find and swim in low flow areas to minimize effort. High potential flow rate may be necessary to test burst swimming ability or fast swimming species (e.g. tunas). Swim chamber length can be very meaningful as in chambers of small length, i.e. fish length > 10 % of chamber length, fish may be unable to utilize all swimming modes. Specifically, small tubes may restrict the ability of fish to transition from a steady to unsteady swimming gate, i.e. to burst and coast swimming. Therefore, fish may stop swimming at approximately the same speed regardless of the step length and Ucrit may be analogous to 'gate transition speed'15.

All swim tunnels need to be calibrated using devices such as flow probes or particle imaging velocimetry (PIV) equipment. Ideally swim tunnels will have rectilinear flow, but if fish are found to favor an area, their swim speed can be adjusted based on local differences in flow.

The author thanks Barbara Berli for providing example data and the gracious funding of the Canadian Wildlife Federation. 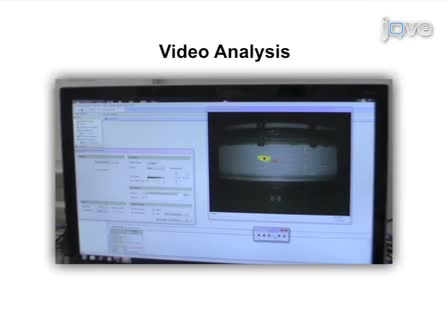