The assessment and treatment of pain in infants is difficult because infants cannot verbally report their experience. In this video we describe quantitative electrophysiological methods and analysis techniques that can be used to measure the response to noxious events from the infant nervous system.

Pain is an unpleasant sensory and emotional experience. Since infants cannot verbally report their experiences, current methods of pain assessment are based on behavioural and physiological body reactions, such as crying, body movements or changes in facial expression. While these measures demonstrate that infants mount a response following noxious stimulation, they are limited: they are based on activation of subcortical somatic and autonomic motor pathways that may not be reliably linked to central sensory processing in the brain. Knowledge of how the central nervous system responds to noxious events could provide an insight to how nociceptive information and pain is processed in newborns.

The heel lancing procedure used to extract blood from hospitalised infants offers a unique opportunity to study pain in infancy. In this video we describe how electroencephalography (EEG) and electromyography (EMG) time-locked to this procedure can be used to investigate nociceptive activity in the brain and spinal cord.

This integrative approach to the measurement of infant pain has the potential to pave the way for an effective and sensitive clinical measurement tool.

Before any studies can be conducted on infants' ethical approval and informed written parental consent needs to be sought.

In this study ethical approval was obtained from the University College Hospital Ethics Committee and informed written parental consent was obtained before each procedure. This study conformed to the standards set by the Declaration of Helsinki and Good Clinical Practice guidelines. 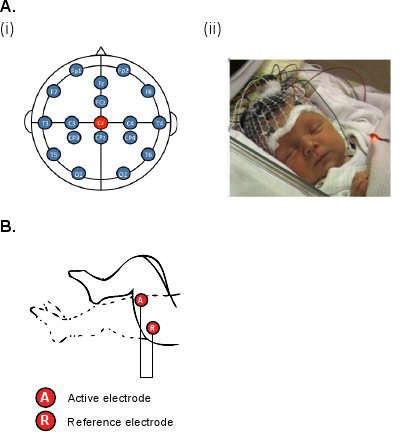 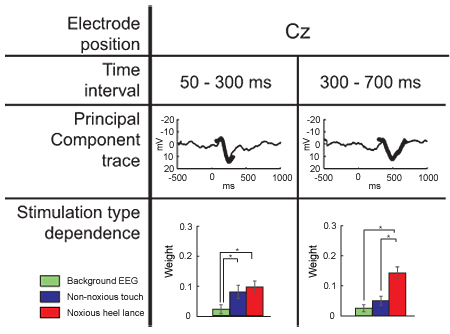 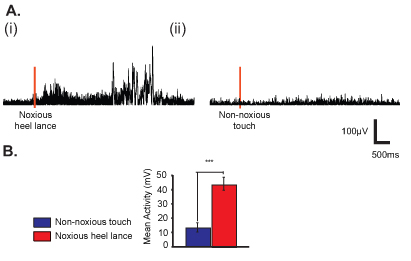 This video shows how electrophysiological responses, evoked by tactile and noxious stimulation, can be characterised in the human infant using EEG and EMG recordings. Studies of this type will help to understand the development and plasticity of human pain processing, and lead to improved clinical assessment and treatment of infant pain 1, 2.

The success of these experiments requires the close collaboration of a multidisciplinary team. Expertise is required in the field of neonatology, clinical neurophysiology, bioengineering and developmental neuroscience.

It is essential that the infant's care take highest priority when these experiments are undertaken. The research nurse or doctor who performs the heel lance has responsibility for the infant's wellbeing and needs to ensure that the experiment is done in accordance with clinical practice. Approval from the hospital ethical committee and written parental consent are necessary to undertake these studies.

The heel lance is a clinically-required event and cannot be repeated for the purpose of the study. It is therefore essential that the recording is collected in a reliable and robust way that does not interfere with clinical practice 3, 4. In particular, it is crucial that the method used to time-lock the stimulation is reliable and does not impede the clinical blood collection.

All the measures of infant pain are necessarily indirect, as such it is important to ascertain that the recorded activity is specifically evoked by the noxious event and not other aspects of the infant's care 2. This can be achieved via careful technical design and post-processing of the data.

The authors declare that they have nothing to disclose.

This work was funded by the Wellcome Trust. 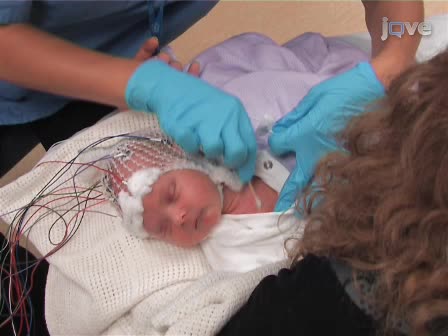