Use of zebrafish for cardiovascular research is expanding towards research on adult hearts. For these applications, quick and simple isolation of cardiac tissues is key to avoid post-mortem changes and to obtain an adequate number of samples. Here, we describe a fast and reproducible method for dissecting adult zebrafish hearts.

More recently, adult zebrafish are playing an important part in bioinformatics approaches to studying cardiovascular development and disease, due to their relatively large clutch size and relatively quick and inexpensive breeding compared to other vertebrate models. Promising techniques include ribosome profiling, RNA-Seq, and cell dissociation and FACS sorting4-7. However, for these techniques the quality of the data can depend on obtaining a large number of samples in a rapid, efficient, and reproducible manner, before gene regulatory, metabolic, transcriptional, and other changes occur.

Here, we describe a method for adult zebrafish heart dissection that is simple, fast, efficient, and reproducible, while preserving cardiac morphology. This method does not include cutting into the pericardial space and therefore does not risk damaging the heart during dissection. Instead, this method relies on anatomical landmarks of the zebrafish, and therefore, it is highly reproducible. This dissection method is also versatile in that it can be used on fresh or fixed fish, and on zebrafish as young as one month old. Finally, this method results in minimal suffering to the zebrafish because after anesthesia and/or rapid cooling, the fish is additionally decapitated and pithed in the course of the dissection procedure.

NOTE: Always be sure that IACUC or ethics committee approval is in place before beginning any experimental procedure using zebrafish. 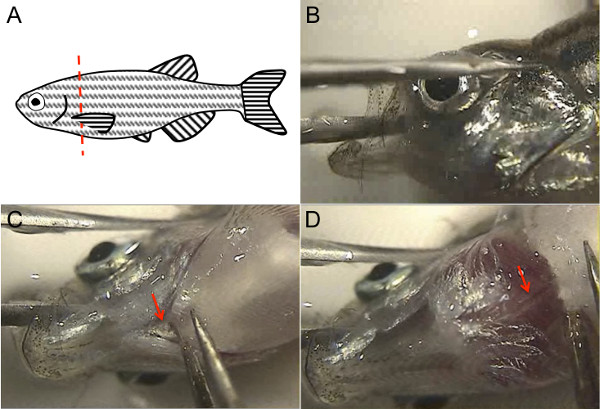 Figure 1. Zebrafish adult heart dissection utilizes zebrafish anatomical landmarks. (A) To decapitate the fish, lift the pectoral fin with a forceps and use a sharp clean razor blade along the red dotted line as shown. (B) To steady the fish head, place one tine of the forceps in the fish mouth while the other tine lies across the eye, and then turn the fish head so that the ventral surface is up and both tines of the forceps are stable against the bottom of the Petri dish. (C) Use the free forceps to cut the attachment of the operculum (arrow). (D) Lifting this, the dorsal aorta is visible as a white structure with a pink stripe denoting luminal blood (arrow). Please click here to view a larger version of this figure.

4. Prepare the Heart for Downstream Applications

Using this method, an adult zebrafish heart can be dissected in less than 1 min, compared to over 5 min using traditional methods8. Hearts dissected using this method are reliably intact (Figure 2A), while traditional methods8 require cutting blindly into the pericardium and therefore commonly cause damage or loss of the atrium or bulbus arteriosus (Figure 2B). Hearts dissected maintain their structural integrity and are suitable for histology (Figure 2C), electron microscopy (Figure 2D), as well as for applications where the heart is dissociated or pulverized. In our hands, from a dissection of 50 hearts over the course of a week’s experiments, 50 hearts were obtained structurally intact. We also taught this technique to a colleague in the laboratory who had no experience with zebrafish dissection. 9 out of 9 hearts dissected by the beginner colleague were also structurally intact. This dissection method is suitable for juveniles older than 1 month old, and for adults of all ages. 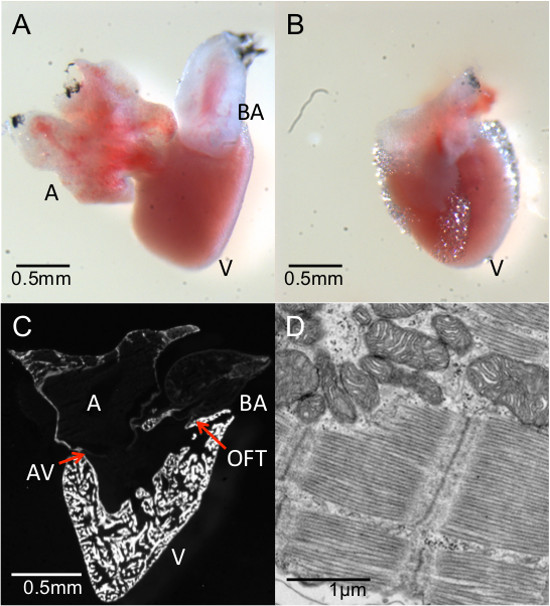 Figure 2. Dissected hearts are intact and maintain architectural integrity. (A) In less than 1 min, an adult zebrafish heart with an intact atrium (A), ventricle (V), and bulbus arteriosus (BA) can be dissected from a euthanized fish. (B) Traditional adult zebrafish heart dissections take longer and even when care is taken, run the risk of damage. Here, only the ventricle is intact. (C) A heart dissected from a Tg(myl7dsRed) adult fish maintained its structural integrity for use in histology. The atrium (A), ventricle (V), and bulbus arteriosus (BA) are seen, and even smaller structures like the atrioventricular valve (AV, arrow) and the outflow tract (OFT, arrow) are intact. (D) Electron microscopy of a dissected wild-type adult heart shows that sarcomeres remain undamaged by the dissection process. Please click here to view a larger version of this figure.

While methods for dissecting the adult zebrafish heart have been described, these methods were time-consuming and commonly caused damage to the heart during dissection. To perform experiments where a large number of adult hearts may be needed, and/or when avoiding degradation of heart tissue is important for downstream applications, the time required using traditional dissection techniques is prohibitive. Similarly, reproducibly obtaining undamaged, intact hearts is important for study of heart structure and for immunohistochemical and microscopy methods. We found that even in the hands of beginners, 100% of hearts dissected were recovered structurally intact. Overall, the method for adult heart dissection presented here presents an advance in technique that expands the use of adult zebrafish for a variety of current and future applications, including use in heart injury and regeneration experiments.

There are several critical steps within this protocol. First, depending on the experiment for which the zebrafish hearts are required, it is important to rinse hearts as much as possible from blood cells. Examples of experiments that would benefit from removing blood cells include recovery of hearts for RNA-Seq, where presence of blood will alter gene expression profiles, or for FACS sorting, where blood cells may be difficult to sort from myocardial cells. After the fish is euthanized with Tricaine or ice, it is important to decapitate the fish quickly and allow bleeding to occur to help rid the heart of excess blood. If an intact heart is not required for the planned experiment, it can be helpful to cut the atrium and ventricle open when in PBS to further rinse out the blood. RBC lysis buffer can also be used instead of PBS.

The heart should be easily identifiable by its shape and contractions. As an additional aid in finding the heart, one can dissect a heart expressing a fluorescent protein under a fluorescence dissecting microscope. This is usually not needed but may be useful for beginners and/or for dissections of very small hearts.

One limitation of this technique is that dissecting hearts from small fish, i.e., younger than 3 weeks old, is difficult; other techniques have been designed for larval dissections9. Also, while it is easy to dissect the bulbus arteriosus, atrium, and ventricle from each other, it is not possible to dissect the atrioventricular valve on its own. The valve remains attached to the ventricle in most cases. 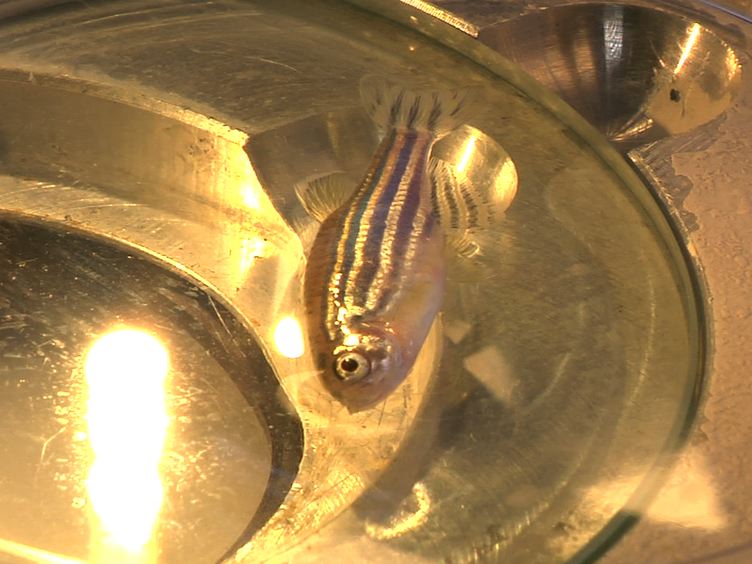