Many human diseases are associated with mutations or variations in genetic sequences. Some of these genetic variants are heritable, passed down from generation to generation, while others arise sporadically during an organism’s life and cause diseases such as cancer. Researchers are trying to identify and characterize these genetic alterations in the hopes of improving diagnosis and therapeutic options for patients.

In this video, we will examine the history of genetic disease research, and explore key questions asked by medical geneticists. Various tools used to identify the genetic basis of diseases are then discussed, including genotyping techniques and genome-wide association studies (GWAS). Finally, several current examples of medical genetics research are presented.

Many human diseases have a genetic component, meaning that they are caused by variations or mutations in an individual’s DNA. Heritable genetic diseases are those that can be passed down from generation to generation, but not all genetic diseases are heritable, including many types of cancer. By discovering and characterizing disease-associated genes, scientists and clinicians are hoping to improve diagnostics and therapies for patients.

This video will present a brief history of genetic diseases, introduce key questions asked by geneticists, describe some tools for answering these questions, and discuss a few current applications.

Let’s start by reviewing some landmark studies in the history of genetic disease research.

In 1803, John Conrad Otto published an article describing a blood clotting disorder that primarily affected males. While Otto recognized this disease ran in certain families, it was John Hay who defined its inheritance pattern in 1813, showing that affected men could pass the disease to their grandchildren through unaffected daughters. Today, this disease is known as hemophilia, and we now know it is caused by recessive mutations in a gene for specific blood clotting factors located on the X-chromosome. Because females normally have two X-chromosomes, but males only have one, females who inherit one mutated copy of the gene are healthy, but males with the mutation will manifest the disease.

In 1896, Archibald Garrod discovered a rare inherited disease called alkaptonuria, where patients’ urine turned black when exposed to air. He postulated that these individuals lacked an enzyme involved in the chemical breakdown of protein, and suggested that similar “inborn errors of metabolism” could be the cause of many inherited diseases.

Building on Garrod’s work, in 1941, George Beadle and Edward Tatum conducted experiments with bread mold to look at how enzymes act in metabolic pathways. Their proposal that one gene specifies the production of one enzyme, to control one step of a metabolic pathway, became known as the “one gene, one enzyme hypothesis.”

In 1966, Victor McKusick, the “father of medical genetics” who pioneered the study of rare genetic diseases in isolated populations, compiled and published Mendelian Inheritance in Man, the definitive catalogue of heritable diseases that continues to be updated today.

While many scientists investigated inherited diseases, others looked for the genetic basis of diseases that appeared sporadically, such as cancer. In 1976, John Michael Bishop and Harold Varmus demonstrated that “oncogenes” are genes that have been mutated in such a way that their encoded proteins acquire new or enhanced functionalities. These “gain-of-function” mutations often result in uncontrolled cell proliferation, a critical hallmark of cancer.

Within the same decade, Alfred Knudson discovered that other genes, called tumor suppressors, only contribute to cancer when mutations in both copies of the gene led to “loss-of-function” of the encoded protein. Knudson’s idea became known as the “two-hit hypothesis.”

To further facilitate this process of gene mapping, in 1990 an international consortium of scientists launched the Human Genome Project to sequence the entire set of DNA in humans. This project was substantially completed in 2004.

A year later, data release began from the International HapMap Project, whose aim is to create a genome-wide map of sequence variants among different human populations. These data now allow researchers to test for associations between genetic variants and common diseases. With the development of high-throughput sequencing technologies, accompanied by ever lowering costs, the use of sequencing to identify disease-causing mutations in patients is increasingly becoming reality.

First, many geneticists want to know if particular diseases are controlled by genetic factors. To begin, they may look for evidence that the disease can be inherited using classical approaches, such as studying families or siblings. These studies are also powerful for determining whether the disease is monogenic or Mendelian, which means it is caused by mutations in a single gene; or is multifactorial or complex, meaning it is caused by multiple genetic and environmental factors.

The genetics of complex diseases, such as Parkinson’s or heart disease, is particularly difficult to tease apart, and many researchers are trying to use large-scale studies across populations to identify genetic variants associated with these diseases. Two competing models shape how scientists tackle the question. The “common disease/common variant” hypothesis suggests the involvement of many genetic variants that are common in the population, each having only a modest impact, while the “multiple rare variant” hypothesis argues for the importance of relatively rare variants with large effects.

Finally, geneticists also investigate how different genetic techniques can be used in clinical diagnosis. They may examine ways to minimize the amount of patient DNA required for testing, or to optimize DNA purification from easily accessible samples, such as saliva or blood, to assess disease risk factors.

Now that you know some of the key questions asked by geneticists, let’s look at the techniques they use to find answers.

The genotyping of single nucleotide polymorphisms, or SNPs, is one of the most widely used approaches to identify DNA sequence variations in a population. Single nucleotide differences can be detected by hybridizing DNA fragments to complementary oligonucleotides, or by using highly sequence-specific restriction enzymes to generate different-sized fragments.

Sequencing-based genotyping is another common approach for finding causal mutations. The classical Sanger method is based on the incorporation of labeled, chain-terminating nucleotides by DNA polymerase during in vitro replication, and is routinely used when a candidate gene is known.

For larger scale analyses, high-throughput next-generation sequencing can be used to generate massive numbers of short sequences that can then be compared to an unaffected control genome to identify disease-associated mutations.

For complex diseases, genome-wide association studies, or GWAS, are used to identify SNPs with different frequencies in affected and control populations of unrelated subjects. Higher frequency of a SNP in affected populations suggests an association between the variant and the disease.

Finally, various cytogenetics techniques can detect structural variations within the genome that might result in diseases. Whole chromosomes can be stained to form a karyotype for identifying changes in structure or number. Alternatively, fluorescence in situ hybridization uses labeled oligonucleotide probes to visualize specific DNA sequences.

Now that you’re familiar with some methods used in gene discovery, let’s look at their applications in disease research.

One approach to identifying disease-causing mutations is to combine the study of family pedigrees with sequencing. In this study, genetic variants were detected in schizophrenia patients by sequencing candidate genes. These mutations were classified as spontaneous, or de novo, since they were not inherited.

Another application involves linking rare genetic variants to complex diseases through association studies. Here, researchers pooled genomes from approximately 1000 individuals and used next-generation sequencing to detect mutations in 32 cancer-related genes. The pooled sequencing technique identified both known and novel rare variants, including ones that were found with comparable techniques like GWAS.

Finally, sequencing technology is now used to inform many clinical diagnoses. In this experiment, investigators extracted and fragmented DNA from tumors. All protein-coding exons were then isolated by binding them to chemically tagged complementary oligonucleotides, and using proteins with high affinity for the tags to capture and collect these DNA complexes. The captured DNA was then sequenced and compared to healthy control samples in order to identify cancer-causing mutations.

You’ve just watched JoVE’s introduction to genes and diseases. In this video, we reviewed the history of medical genetics, key questions asked by geneticists, prominent research strategies, and some of their current applications. Thanks for watching! 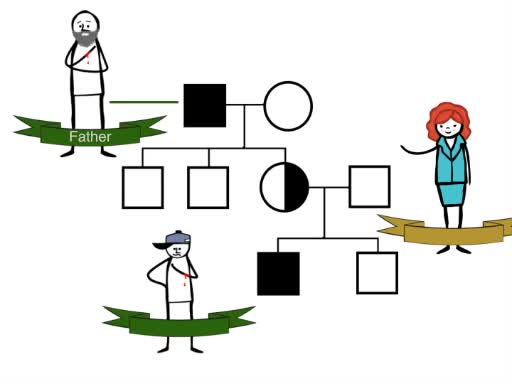